Which is the best Android tablet of 2020?

Last year, there wasn’t a huge selection of new Android tablets, especially at the cheaper end of the market. Amazon updated its Fire devices in 2019, but the real big hitters were higher-end tablets from the established brands.

While we weren’t overly impressed with the Google Pixel Slate, we did like the Samsung Galaxy Tab S5e.

If you’re not tethered to Android, check out our best tablet round-up to see the top overall options available right now. If you’re looking to save money, try our guide to the best budget tablets.

How we test and choose the best Android tablets

Every tablet we review is put through a series of benchmark and real-world tests, and our reviewers always transfer everything across to the review device to use it as their main tablet at work and home. The majority of tablet reviews are conducted over a period of at least 10 days, with updates subsequently added to the review following any software upgrades, new features or changes to the price. Find out more here. Now that’s out of the way, here are our verdicts:

Best combination of value and features 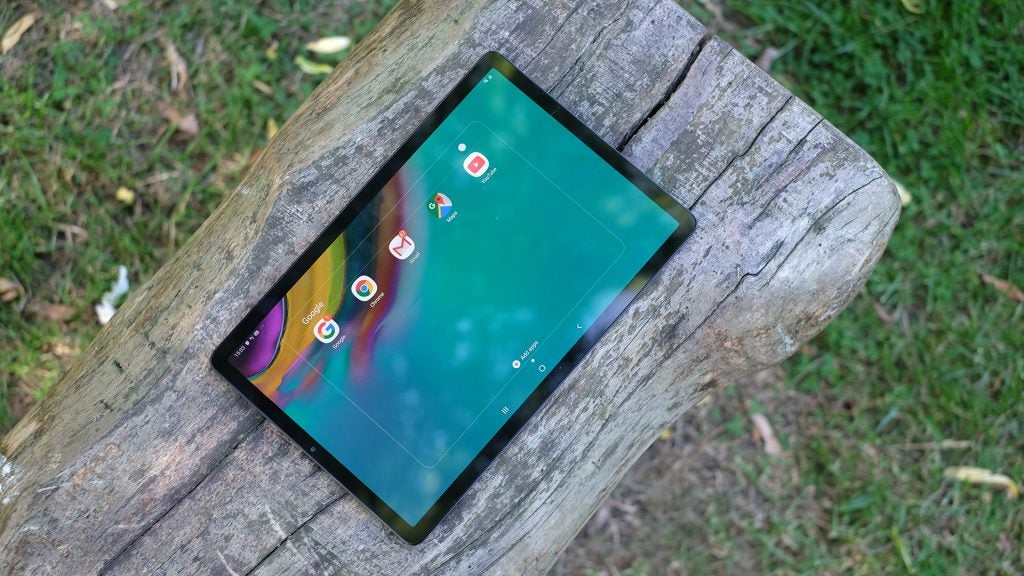 Why we liked the Samsung Galaxy Tab S5e

The Samsung Galaxy Tab S5e is what we’ve been waiting for: a mid-priced model with some higher-end touches. The Galaxy Tab S5e looks great, has excellent speakers, a fantastic display, a charming aluminium body, and comes in at a price that’s easy to swallow. Samsung might have finally made an Android tablet worth buying – although it still isn’t as powerful as an iPad.

The cameras aren’t dazzling but this is rarely true where tablets are concerned. It also uses a lower-end processor than the Galaxy Tab S4, helping bring down the asking price to below £400 (for the 64GB version), but gets by just fine. The Samsung Galaxy Tab S5e has a 7040mAh battery – just a little smaller than the Tab S4’s 7300mAh cell – and Samsung claims it will last an incredible 14.5hrs.

It’s super-slim and its 400g weight is light for a 10.5in tablet. Samsung has trimmed down the screen borders too, while still leaving sufficient room for resting your thumbs whether you’re holding the Galaxy Tab S5e on its side or upright. 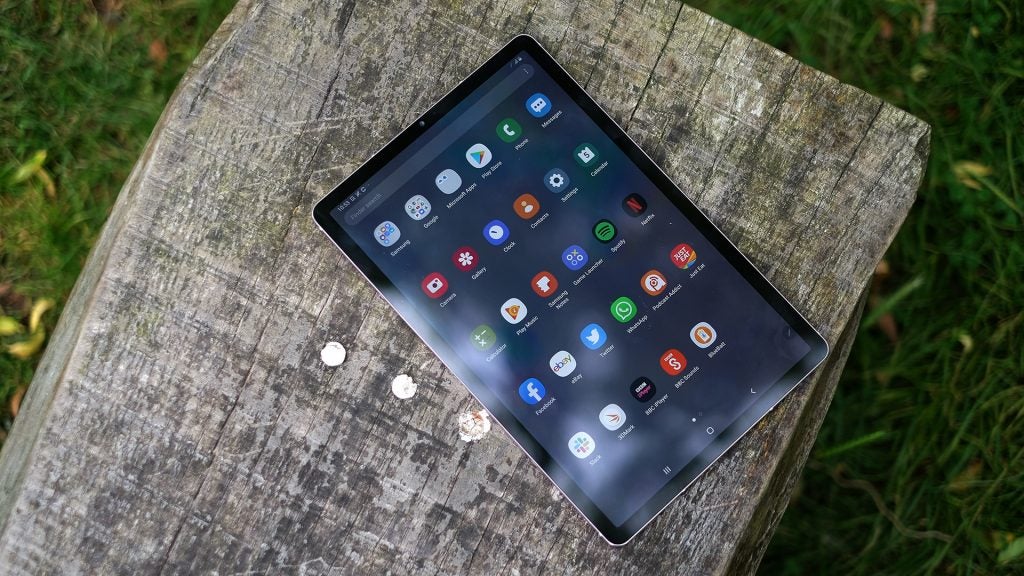 Why we liked the Samsung Galaxy Tab S6

The Samsung Galaxy Tab S6 is the best Android alternative to an iPad Pro. It has a large display, high-end specs, a great sketching stylus – and it costs quite a lot.

You’ll pay £619 for the Wi-Fi version and £689 for the 4G model. If this sounds too expensive, don’t forget the 11in iPad Pro has half the amount of storage and will cost you £269 more when you add in the Apple Pencil. (Of course, nowadays even the basic iPad supports the Pencil and a 128GB iPad plus Pencil costs £498 – that’s £120 less.)

This tablet has a 10.5in display, and is extremely thin at 5.7mm and fairly light at 420g. Sharpness is good and, while neither colour calibration nor screen architecture match those of the the Note 10+, this is just about the best screen you’ll find in an Android tablet. This is also the first HDR10+ tablet, which should surprise no one, given that HDR10+ is a Samsung standard. You’ll find some videos using this standard on Amazon Prime Video, and the Tab S6 is an excellent way to watch movies and TV, HDR or not.

The main design annoyance is the same as with the Galaxy Tab S5e – there’s no headphone jack with this tablet, which seems an even more brazen way to push people into buying wireless headphones than jackless phones.

This is the best Android tablet around, but if the stylus isn’t a big factor, consider the Samsung Galaxy Tab S5e. It costs a lot less and still performs all the usual tablet jobs perfectly well. 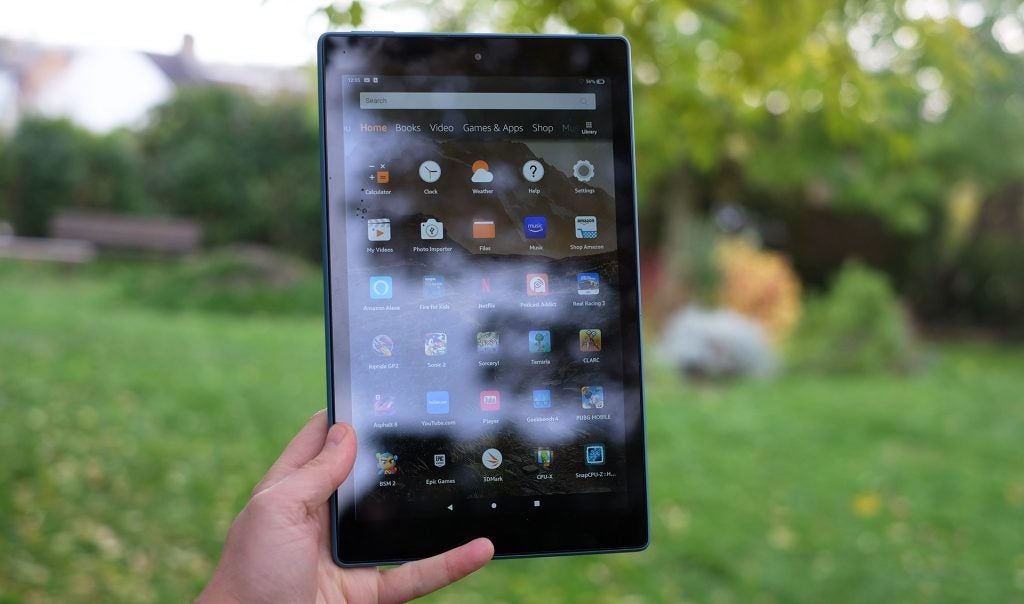 Why we liked the Amazon Fire HD 10

The Amazon Fire HD 10 (2019) offers top-quality hardware for the money and is a great buy if you can live with the patchy app library.

Its screen and build quality are both excellent for the money – in fact, you won’t find a better screen than the Amazon Fire HD 10’s at this price point. Its 10in 1920 x 1200 pixel LCD screen offers up solid colour and decent clarity, and Netflix also plays at full 1080p resolution, which isn’t available on many high-end phones, let alone the kind of no-name tablet you might be tempted to buy instead of an Amazon Fire HD 10. If 90% of your tablet use will be Amazon and Netflix streaming, then the Amazon Fire HD 10 is a perfect choice for you.

The Amazon Appstore games and apps library, however, is unlikely to impress those who already know their way around Google Play. Most of the games you might want to play on the big screen aren’t available from the Amazon Fire HD 10’s app store. If Google Play gets an A, Amazon Appstore is C-grade material at best. 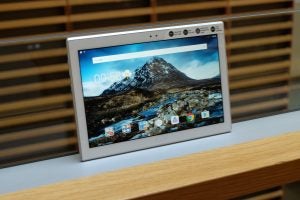 Why we liked the Lenovo Tab 4 10 Plus

At its core, the Lenovo Tab 4 10 Plus is a great general-purpose tablet with a decent design and a low price. For the money, it offers a pleasing display that’s good for media, there’s plenty of storage to work with and its performance doesn’t disappoint either.

The fingerprint sensor isn’t just secure, you can use it to jump between multiple users with one touch and Lenovo has produced a robust accessory ecosystem to augment its underlying functionality.

The Kid’s Pack adds a bumper, screen protector and curated access to hand-picked child-friendly content via Kidoz; the Productivity Pack includes a detachable Bluetooth keyboard that doubles as a protective folio cover and stand; and the Home Assistant Pack features an Amazon Alexa-capable microphone and a speaker dock that transform the Tab 4 10 Plus into a makeshift Echo Show.

Best Android tablet if you’re on a strict budget 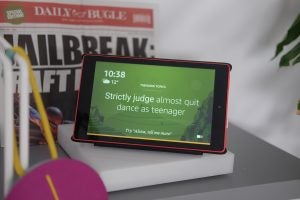 Amazon Fire tablets have always been excellent options for those on a budget and the 2018 Fire HD 8 offers more for your money than any of its predecessors. As with previous entries in the line, the Fire HD 8 comes running Fire OS – a forked iteration of Android that doesn’t include the Google Play Store out the box, instead prioritising Amazon’s content and apps that the company has modified to play nicely with its platform.

As long as you can stomach the software, for the sub-£100 price you’re getting an 8in tablet with an HD display, external speakers and Amazon’s Alexa assistant. The tablet even features Show mode, which alters the software so that it behaves more like Amazon’s Echo Show. Paired with the available charging dock, it makes for a worthwhile home tablet for light use, answering questions via Alexa and general entertainment. 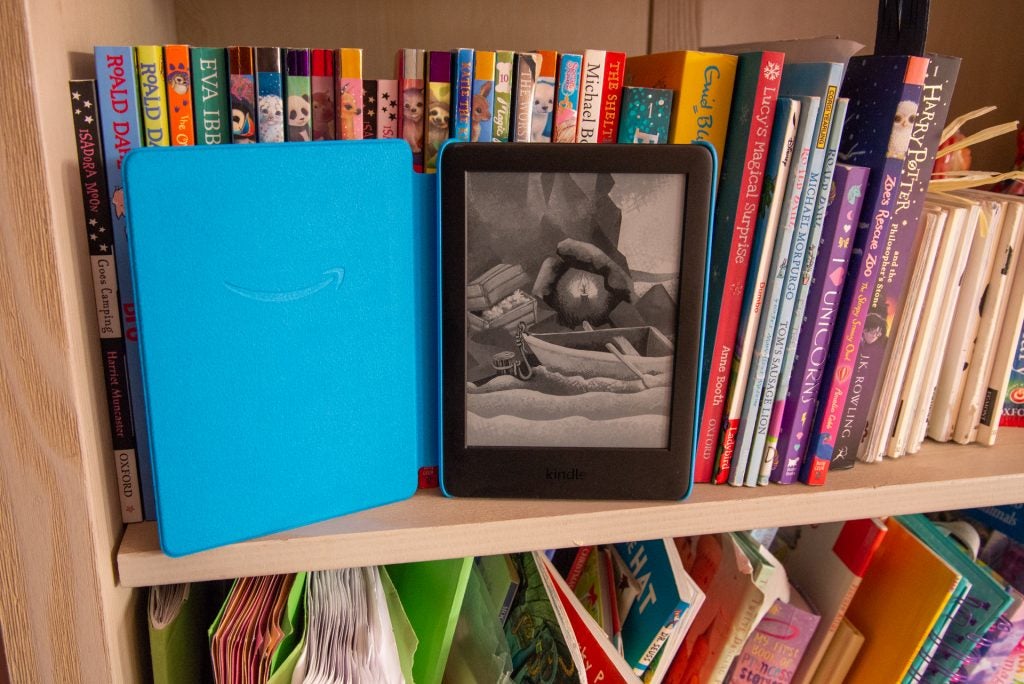 Why we liked the Amazon Kindle Kids Edition

The Amazon Kindle Kids Edition is effectively a regular Kindle and case that costs an extra £20 to £30 more than the standard model. It’s well worth paying that little bit more, however, as you’ll get free access to over 1000 books with a year’s subscription to Fire for Kids Unlimited, proper child-protection controls and a quibble-free two-year accidental damage guarantee.

Hardware-wise, the Kindle Kids Edition is a standard Amazon Kindle. It has a 6in E Ink display, making it no bigger than a standard paperback book, and the Kindle is far thinner than most books at a svelte 8.7mm.

This is a brilliant eReader for kids and they can learn as they read with a dictionary feature that lets them look up difficult words, enhancing their vocabulary.

Best Tablet Round Up