The GeForce Now beta is very impressive, and seems a far better cloud-streaming service than Google Stadia since it utilises your existing library of PC games. High demands regarding internet speeds mean there's no guarantee this will appeal to the masses, but the free subscription tier at least makes it very accessible. That said, questions still remain whether the servers will hold up post launch.

GeForce Now is a cloud-streaming service looking to challenge the likes of Google Stadia.

By subscribing, you’ll be able to play video games on a laptop (Windows or macOS), Android smartphone, TV or Chromebook (coming soon) – regardless of the hardware’s specs. You’ll just need a high-speed internet connection to stream the games from Nvidia’s servers.

GeForce Now has been in beta for ages, but it’s now available to everyone following an official launch. Nvidia offers both a free service and paid-for subscription, which grants access to extra features such as ray tracing.

While we’ve yet to spend enough time with GeForce Now post-launch to deliver a verdict, we have had extensive experience with the service during its beta. Read below to see what we think.

The beta for GeForce Now officially closed on 4th February 2020. We’re currently testing the newly launched public version, but we’ll need a bit more time to get a good understanding of that.

The GeForce Now Beta allowed us to have a crack before the official release and, even in beta, it seems simply remarkable.

Firstly, I can’t reiterate enough that it remains super easy to use. You search for a game you have previously purchased and, if Nvidia GeForce supports it, you will be shown the game in the program.

It’s worth mentioning here that GeForce Now doesn’t require you to buy games through its own locked-down shop like Stadia. Instead, you can import games from the likes of your Steam, Epic Games Store and EA Origin libraries.

Next, you click the game and Nvidia will show it is setting up the connection – this aspect really emphasises that GeForce Now analyses what your internet connection has to offer in order to give you the best experience.

You’re then invited to log into the library for which you own the game. Do this, click play and then you’re off. Simple. 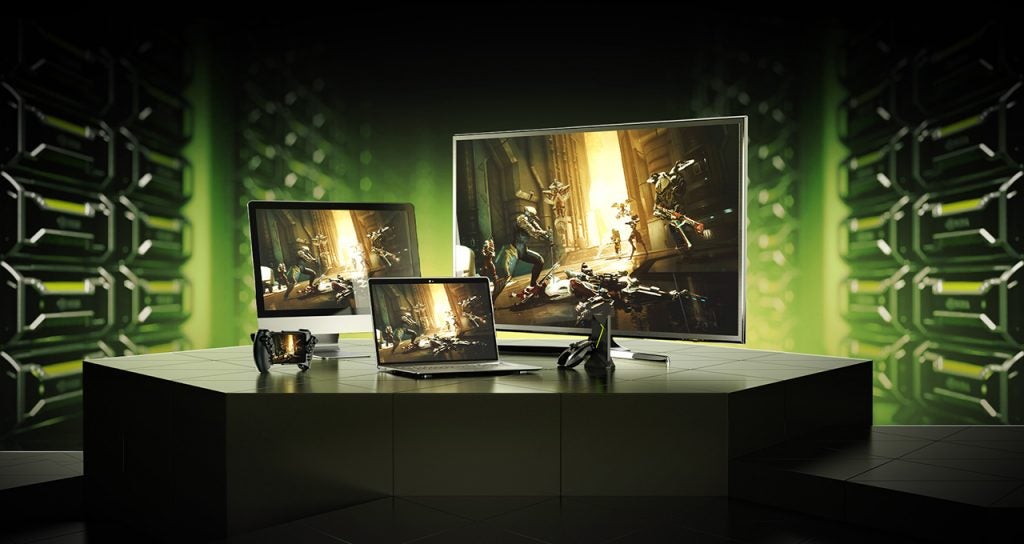 Beyond the simple setup, the performance is what stands out above all else. I tried out the service at home with a middling to a below-average internet connection on a sub-£600 laptop – a system far from intended for gaming.

I booted up Dark Souls 3 on the service. When connecting, GeForce Now warned that due to my connection I could experience some lag and that it would be running at 720p. Such a resolution isn’t going to knock anyone’s socks off in terms of visuals, but GeForce Now is primarily intended for ease-of-use and accessibility. I don’t think it will miff people who want to avoid forking out for an expensive gaming PC.

Despite Nvidia’s warnings of lag, Dark Souls 3 ran without a hitch. I connected a DualShock 4 controller to my laptop and didn’t notice any lag or lag – it ran flawlessly.

A big reason why this works so well is because the service intelligently determines the speed of your internet connection and then limits the performance of the game accordingly. Nvidia sets a max resolution of 720p if it thinks your broadband connection can’t handle a higher resolution.

If you want to run your games in Full HD at 60fps, you’ll need a stable internet connection with 25 Mbps download speeds. That isn’t an outrageous demand, but it is slightly higher than the average UK broadband speed.

Even if you do have super high-speed broadband connection, 4K gaming is off the table for GeForce Now. This is understandable, as Nvidia is concentrating on lower resolutions to ensure a stable performance. But this is one area where Google Stadia boasts an advantage.

Indeed, the promise of Nvidia GeForce Now is very similar to Google Stadia but – as we’ve mentioned – Nvidia has the benefit of providing access to many games already owned by PC players via popular libraries like Steam, Origin and Epic Store. And unlike Stadia, you don’t need to worry about losing access to all of your games if the servers do go down permamently, as you’ll still be able to play all your titles on a traditional gaming PC at no extra charge.

It is also worth bearing in mind the service I tested was still in the beta stages. I did not encounter any bugs or major issues and – if the final product refines GeForce Now even further – it’s a very attractive offering. We’ll be testing the newly launched public service over the coming days and updating this page accordingly. 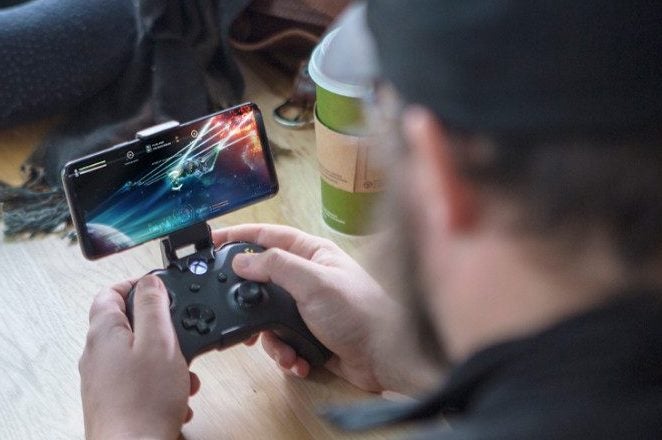 During Gamescom 2019, I got the chance to try out GeForce Now running on mobile. Nvidia representatives gave me a Razer Raiju Mobile controller, which had a Samsung Galaxy S9 Plus equipped. To my surprise, Shadow of the Tomb Raider was running on it, and it looked absolutely gorgeous.

It was difficult to comprehend I was actually playing this AAA title – one even certified gaming PCs can struggle with – on a smartphone. Of course, with GeForce Now, the hardware is irrelevant as all the heavy lifting was being done by Nvidia’s servers in Frankfurt via the Wi-Fi connection.

In terms of performance, Shadow of the Tomb Raider ran incredibly smoothly. I saw no frame rate issues, no screen tearing or even texture popping. It was as if I was playing it on my gaming rig at home – just on a smaller screen. I did sense a little input lag, which was insignificant enough to still be perfectly playable, but could pose a bigger issue for online multiplayer.

Nvidia did stress the input lag was likely down to the low download speeds of the shaky Gamescom Wi-Fi network, which is a totally plausible explanation. The fact I was streaming Shadow of the Tomb Raider at all using the Gamescom Wi-Fi was a wonder in itself.

Even more mind-bending was the fact ray tracing was in full effect here, as I could immediately see Lara Croft’s reflections in the many puddles streaking across the rain forest floor. So far the feature is only available with expensive RTX graphics cards, so to see it working on an Android smartphone was surreal.

I came away extremely impressed with GeForce Now, fantasising about a future where I could slip a 5G phone out of my pocket and jump straight into a game of the Witcher 3 with no waiting around for downloads or updates.

You can now download the official app for GeForce Now on Android smartphones, and play all of the supported games in your Steam, Epic Games Store and EA Origin libraries. Subscribe to the £4.99/month plan, and you’ll even get to upgrade the visuals with ray tracing.

We will be reviewing GeForce Now in more detail on smartphone following the official launch. Until then, try out the free plan to try it out for yourself.

The GeForce Now beta is very impressive, and seems a far better cloud-streaming service than Google Stadia since it utilises your existing library of PC games. High demands regarding internet speeds mean there’s no guarantee this will appeal to the masses, but the free subscription tier at least makes it very accessible. That said, questions still remain whether the servers will hold up post launch.