This Beam is a soundbar does a bit of everything and does it well, excelling at both music and movie soundtracks and fits seamlessly into Sonos’ existing network of multi-room speakers.

I say ‘smart’, as opposed to a standard soundbar, because the Beam features built-in support for Amazon Alexa and can also function with Google Assistant. With the Beam, Sonos has taken the same approach as the Sonos One, which integrated voice assistance to great success.

Sonos’ elevator pitch is that there are too many smart speakers made for the kitchen instead of the living room. Now we have a larger, horizontal alternative, which hopes to serve as your living room’s one and only audio device. Well, until Sonos goes off and makes something else.

And the Beam continues the company’s commitment to an open platform for voice assistants with support for Alexa, Google Assistant, as well as Apple’s Siri.

The Sonos Beam is an ambitious sound system that aims to do many things, and I’m pleased to say it aces them all.

There isn’t much to do with the aesthetics of a soundbar, but that doesn’t mean that Sonos hasn’t had a good go at it. The Beam is pitched as a compact soundbar, coming in at about half the size of the Sonos Playbar.

Measuring at 651mm wide, 100mm deep and 68.5mm high – it’s compact enough to avoid blocking the bezel at the bottom of your TV.

Why call it the Sonos Beam? It’s a literal application of the word, as in the architectural sense, not lasers. Sonos tells me it thought about calling it the ‘Sonos Bar’, in much the same way as the Sonos One dropped the ‘Play’ prefix. Regardless, the company ended up choosing something fresh, for clarity’s sake. 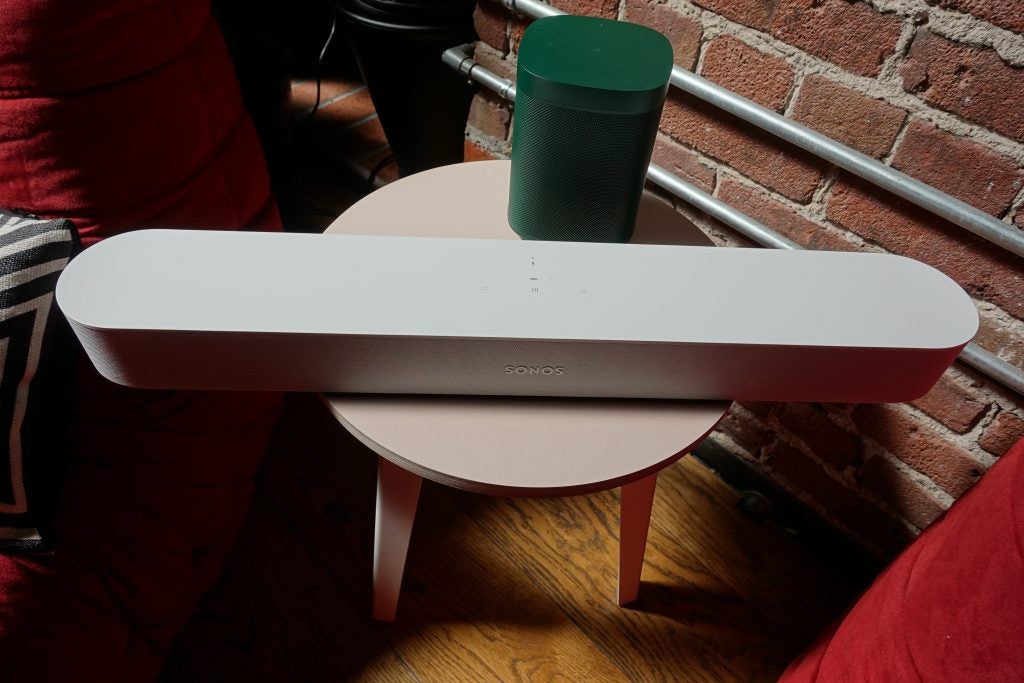 The Sonos Beam can only work in one orientation, which is unlike the Playbar’s ability to fire in upright or flat positions. If space is at a premium, or you’re picky about positioning the speaker, it might be worth having a look at the custom wall-mounts that Flexson produces.

A fabric grille hides the audio components inside: a tweeter, four elliptical full-range woofers and three passive radiators. Two of the woofers are positioned at the ends, angled out at about 45 degrees for wider dispersion of sound.

The fabric is a throwback to the Playbar, but elsewhere the Sonos Beam is aesthetically closer to the Playbase. The ends are rounded in contrast to the Playbar’s boxy, angular approach, and the colour scheme is either a monotone matte black or white.

There are touch-sensitive keys instead of physical buttons, using the same layout as the Sonos One with volume down, play/pause, and volume up. Swipe left or right across this trio to skip tracks. There’s also a mute button for the microphone.

The Beam addresses the key problem of both the Playbar and Playbase. They only offered a digital optical input as the only physical link to your TV and that’s now been swapped out for a HDMI In.

With only one input available, you still can’t plug all your stuff into the soundbar. Sonos believes that a relationship between TV and soundbar should be simple – you’re expected to plug what you need into your TV, and have a single cable going to the Beam. This bypasses any potential issues with video signal compatibility as the device is only interested in audio. 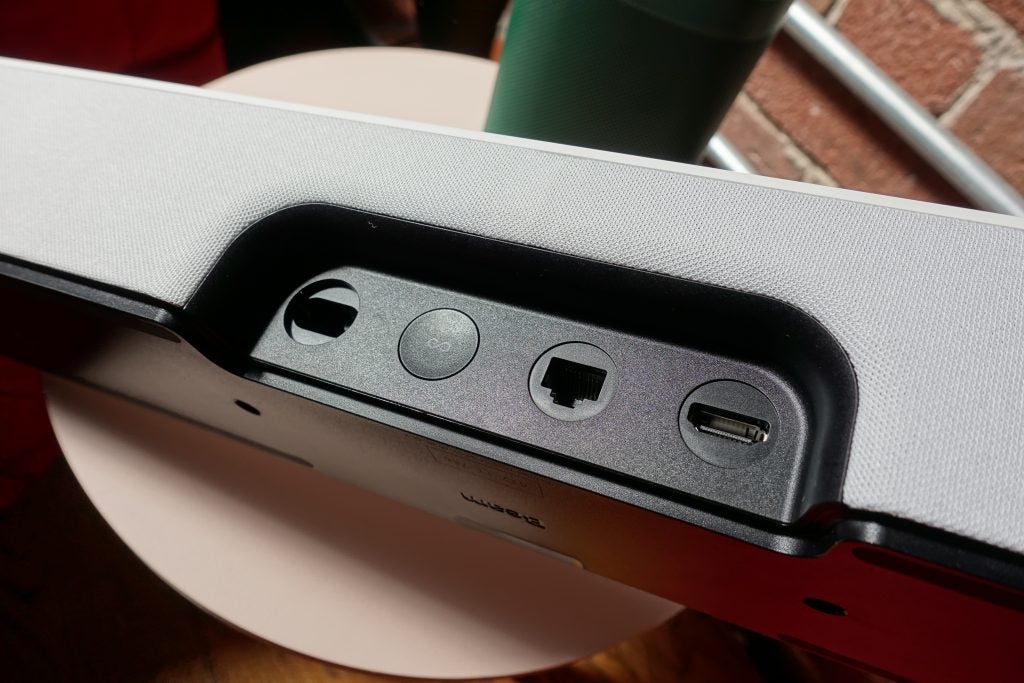 The Sonos Beam is meant to use your TV’s HDMI ARC (audio return channel) socket. HDMI ARC takes care of transferring audio to a soundbar, while HDMI CEC takes care of power and volume operation.

Not interested in HDMI and don’t want to give up that socket on your TV? That’s fine – Sonos includes an optical-to-HDMI adapter as an accessory. Elsewhere, non-HDMI connections are basic. There’s an Ethernet socket plus built-in dual-band Wi-Fi, and a power socket.

Sonos doesn’t often venture in Bluetooth, at least until the Sonos Move, preferring Wi-Fi instead. Sonos works firmly in network-based audio when it comes to music streaming. This is not the most ideal solution if you just want to ping over an audio file from your phone to a speaker, but it makes sense for the multi-speaker, multi-room music-streaming ecosystem that is Sonos’ domain.

Added to all that, there’s Apple AirPlay 2 which brings Siri voice control support to the feature set.

The Beam’s stand-out development is the inclusion of Alexa voice assistant. Besides setting up timers and looking up information, Alexa can control your TV. And I don’t just mean power and volume, either.

If you have a Fire TV device plugged in – the Amazon Fire Stick, for example – Alexa will help the Sonos Beam control that, too. You can use your voice to control what you watch. This means yes to Netflix, Prime Video or BBC iPlayer, but no to Now TV.

Sonos isn’t the first to make an Alexa-toting soundbar – that honour falls to the Polk Command Bar. However, Sonos is the first to support both Alexa and Google Assistant – and Apple Siri too. That last one is a pleasant surprise. You can get Siri to start playing a song on Apple Music, and then later control it with Alexa – seamlessly. This platform-agnostic approach helps Sonos reach more people, since it’s always easier to buy something that fits into your existing ecosystem. 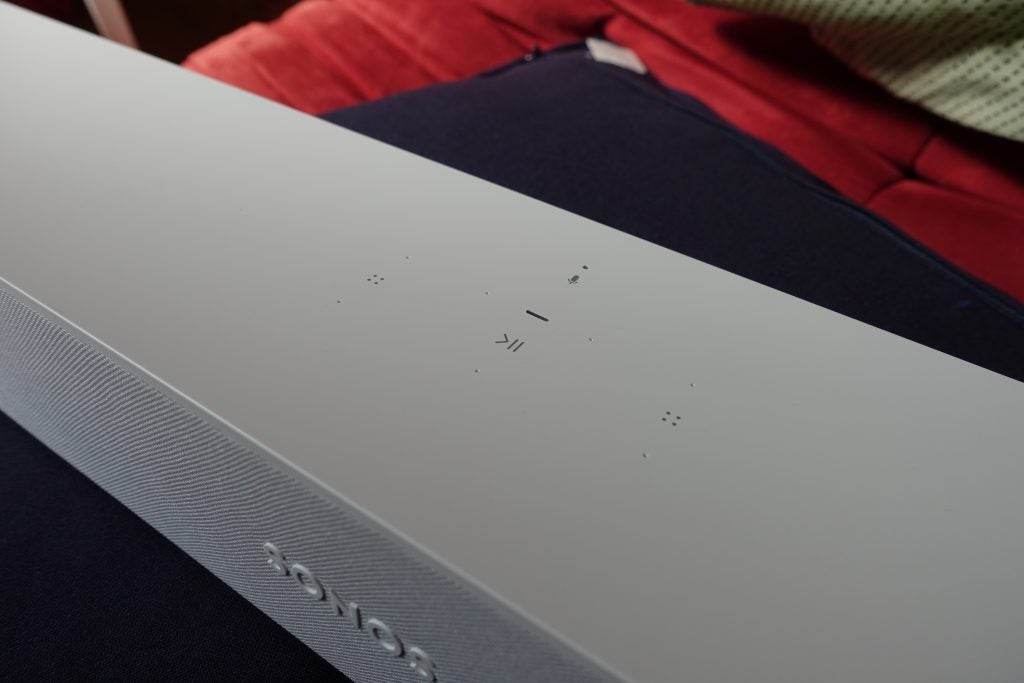 Elsewhere, the Sonos Beam offers the same tricks and treats you get with other Sonos speakers. There’s Trueplay, which analyses your room’s characteristics and optimises the sound according to the speaker’s position. Place the Beam next to a wall, you don’t need to worry about there being too much bass. However, Trueplay is only available on iOS devices, due to the consistency of the microphones Apple uses.

As ever, the excellent Sonos app brings them all together, but some of these services (Spotify, for example) can be controlled through their own apps. Then there’s voice control – you won’t be able to voice-search on every service, but you will be able to skip tracks or pause. Five far-field microphones and multi-channel echo cancellation means your voice can be heard even whilst music is playing.

The Beam is compatible with the Sonos S2 app. Some older Sonos products aren’t compatible, and you can find out which here.

The one omission is Dolby Atmos, which has been the cause of much concern. In my opinion, it isn’t really justified. Given the price of the product and the audience Sonos is going for, Atmos was never coming to the Beam. If you are after a Dolby Atmos soundbar, there is the Sonos Arc, but you will need a TV that has an eARC connection to get the most out of it.

Finally, there’s the multi-room element. Sonos remains one of the best options for multi-room audio. The Sonos Beam can be used as part of a network of other Sonos speakers to play the same song at the same time, or a different song in every room.

The app (now the S1 app) is super-slick. Controlling multi-room systems can often be likened to herding cats but Sonos makes it easy. You’re never in danger of accidentally playing music in the wrong room.

If multi-room isn’t your thing, how about wireless surround sound? The Sonos Beam can connect to other Sonos speakers, including the Sonos Sub, and can be used in a 5.1 configuration.

Given that the Sonos Beam’s price and footprint are almost half the Playbar, my instinct was to expect half the performance. But this wasn’t the case at all. Sonos has done something great with the Beam.

It’s always tricky when an audio product is tasked to handle both movies and music. A device that works well for watching films won’t necessarily be good at pumping out tunes. Thankfully, the Sonos Beam excels at both. I played a mix of music and movie soundtracks and was impressed at every turn.

The first song was Leon Bridges’ You Don’t Know. My first thought was that the soundstage could be a little wider, but I was impressed by the solidity of the stereo image, which was neatly defined. 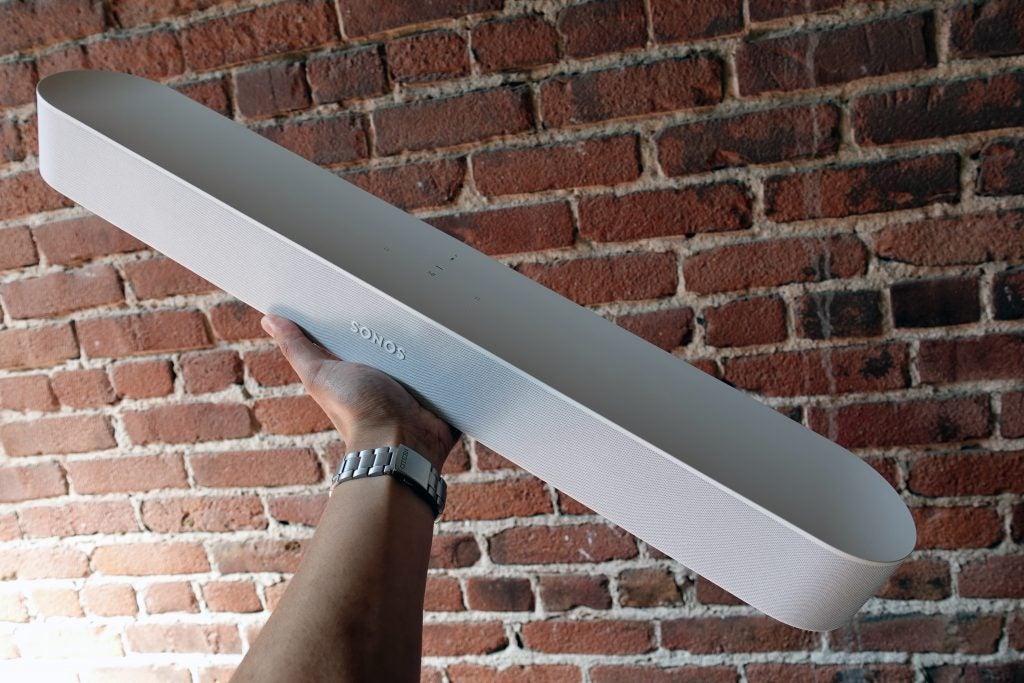 That comment about the width of the soundstage was shot to bits by the next song in Radiohead’s Reckoner. The stereo image was just as defined, but this time I was confronted by a wall of sound significantly wider and taller than the Sonos Beam. Whatever dispersion techniques the Beam is using, it totally works.

Such a dramatic difference between tracks is a great indicator of an audio product – it became very apparent that the songs had vastly different productions, and the fact that the Sonos Beam could convey the disparity was a very good sign.

Next up was Wow by Beck, a song with a thumping bassline and percussion scattered throughout the frequency range. This was a great demonstration of the Sonos Beam’s dynamic headroom, and its bass prowess in particular. It’s an impactful, authoritative bass, with a remarkable agility. Bass extension is far-reaching enough that I never felt the need for an external subwoofer, at least where music is concerned.

As for video content, dialogue was clear, with a good amount of weight behind the voices. Say goodbye to tinny-sounding people.

What really surprised me was big movie set pieces with high production value. In Wall-E I watched the scene where he uses a fire extinguisher to zip about in space. Then I watched The Last Jedi, with all manner of laser fire going off in the opening scene.

The accuracy and spread of effects placement was astonishing. The stereo image was so wide and solid that occasionally I felt the effects begin to reach behind me. 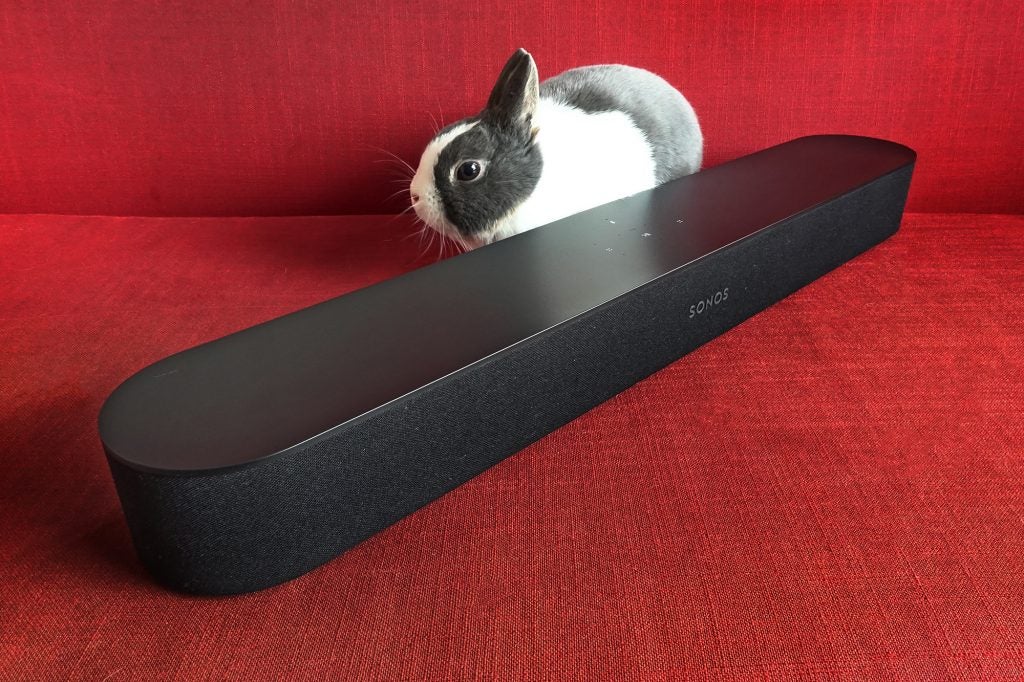 And it gets even better if you pair the Sonos Beam with a pair of rear speakers (two Sonos One SL units). A scene from the end of Stranger Things season 1, where Nancy and Jonathan discover the portal in the woods, was super-immersive. There was palpable menace throughout; I felt the panic in the actors’ voices, and the precision of rustling leaves succeeded in transporting me to that creepy forest.

What about the Sonos Beam versus the Sonos Playbar? Sonos regards the Playbar as the more powerful option (at least until the Arc appeared on the scene). It shifts more air and offers deeper bass; good for annoying the neighbours. But the Beam isn’t far off, considering the price difference. It’s an agile, versatile device and a lot easier to accommodate.

The following are a few Sonos Beam set-up tips. If you have an iPhone, make sure you use the Trueplay feature to calibrate the soundbar’s audio for your room. It takes into account the amount of space and reflections for a more balanced tonal performance.

Also, you’ll find a ‘Loudness’ option under the EQ menu – this isn’t to make things louder at all. You’ll want to turn this on to hear bass at lower (late night) volumes. But maybe turn it off for loud movie nights, since I feel it compresses the dynamic range a little.

You should buy the Sonos Beam if…

This soundbar does a bit of everything and does it well. It excels at both music and movie soundtracks.

It fits seamlessly into Sonos’ existing network of multi-room speakers, and has no problem fulfilling its promise of controlling TVs and Amazon Fire TV devices. The platform-agnostic inclusivity is a healthy approach, and I wish more tech companies would think this way.

The Beam’s footprint is small, and as such is perfect for those with limited space.

You shouldn’t buy the Sonos Beam if…

If you’re after something that can do Atmos, the Arc would the soundbar to get, but you’ll need a TV that supports eARC to get the full benefits of Atmos.