LG has packed plenty of features into its SL8YG soundbar and sub combo, which offers convenience for getting Atmos into your living room. For “genuine” surround sound the duo is something of a compromise – unless you add the SPK8-S rear speaker package.

The SL8YG is the entry-level Dolby Atmos soundbar in LG’s 2019 range. Designed in partnership with Meridian, the LG SL8YG features support for Atmos and DTS:X audio formats, as well as Google Assistant voice control.

If you’re looking to get Dolby Atmos into your  home, a soundbar is becoming the most affordable and space-saving way of doing so, with a number of AV brands adopting the technology in their home cinema products.

The top-three soundbars in LG’s 2019 soundbar range are all Dolby Atmos compatible, with the SL8YG slotting beneath the SL9YG and SL10YG. Atmos isn’t the only feather in its cap, though, with DTS:X, Hi-Res Audio and Google Assistant featuring too.

It’s a soundbar that offers plenty of bang for its £699 asking price.

LG SL8YG design – A great-looking soundbar, but the remote is fiddly

Taking the LG SL8YG out of its packaging and you’re greeted by a sleek, distinctive and modern-looking unit that avoids the chunky nature of some soundbars.

The anodised metal surface lends the soundbar a gorgeously simple but premium look and feel, with the speaker grille mesh encompassing the front and wrapping around the chamfered edges.

On top are two further speaker grilles, under which sit the up-firing Atmos speakers that make the “.2” in the soundbar’s 3.1.2 speaker configuration. In the middle are touch-input controls for volume, playback, power, function (Input) and microphone on/off. 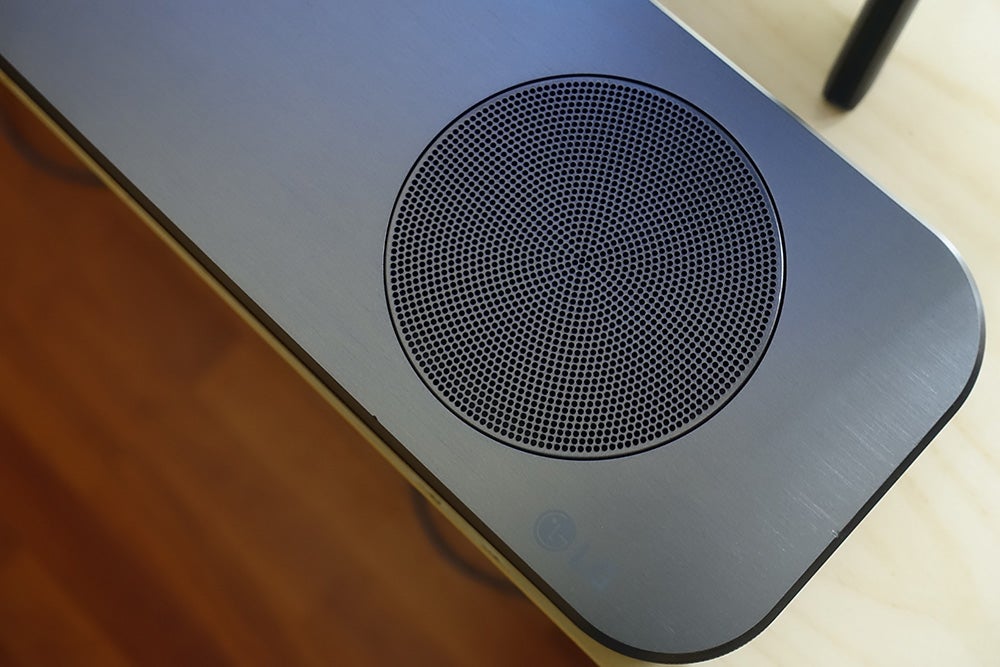 The “G” in the model number, alongside the Google Assistant logo indicate voice assistant compatibility, with the small holes keying you to the location of the soundbar’s far-field microphones.

Initially undetectable, but right in the middle of the front panel, is a LED display that provides scrolling updates to sound modes and audio formats. Just beneath it are four LED lights for Google Assistant, which indicates whether it’s on (solid or blinking white lights) or in standby (amber). The display is small, but readable from a fair distance; it dims after 15 seconds. 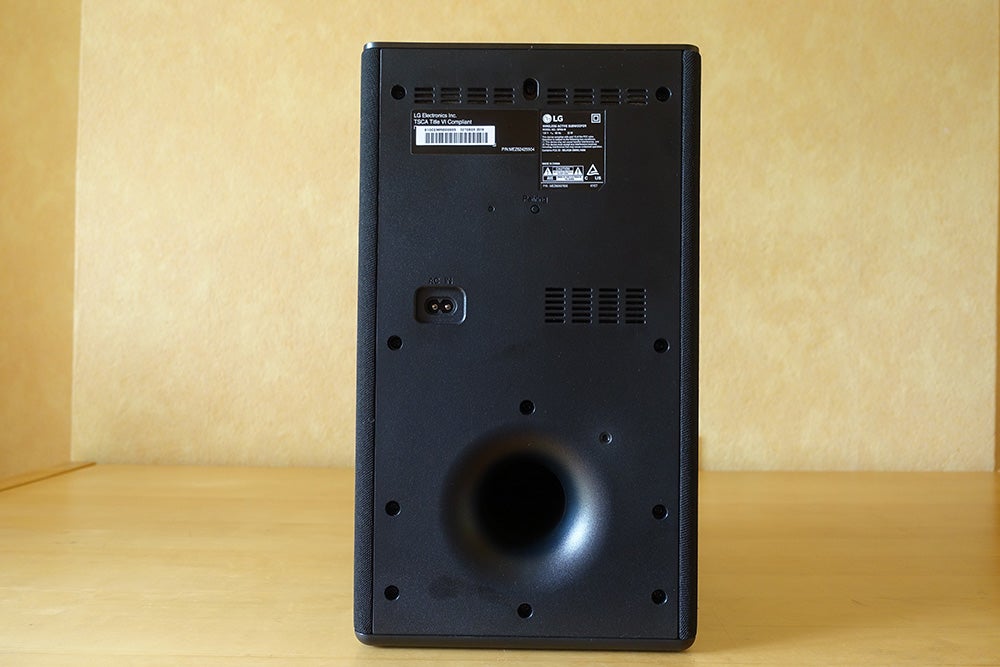 The SL8YG is accompanied by a 220W wireless soundbar, which should be placed away from walls to reduce reflections. At 4.4kg for the bar (7.8kg for the sub) it’s weighty, but won’t prove a problem if you’re looking to wall-mount; wall fixings are included in the box. This soundbar is ideal for partnering with TVs of 49in and bigger. 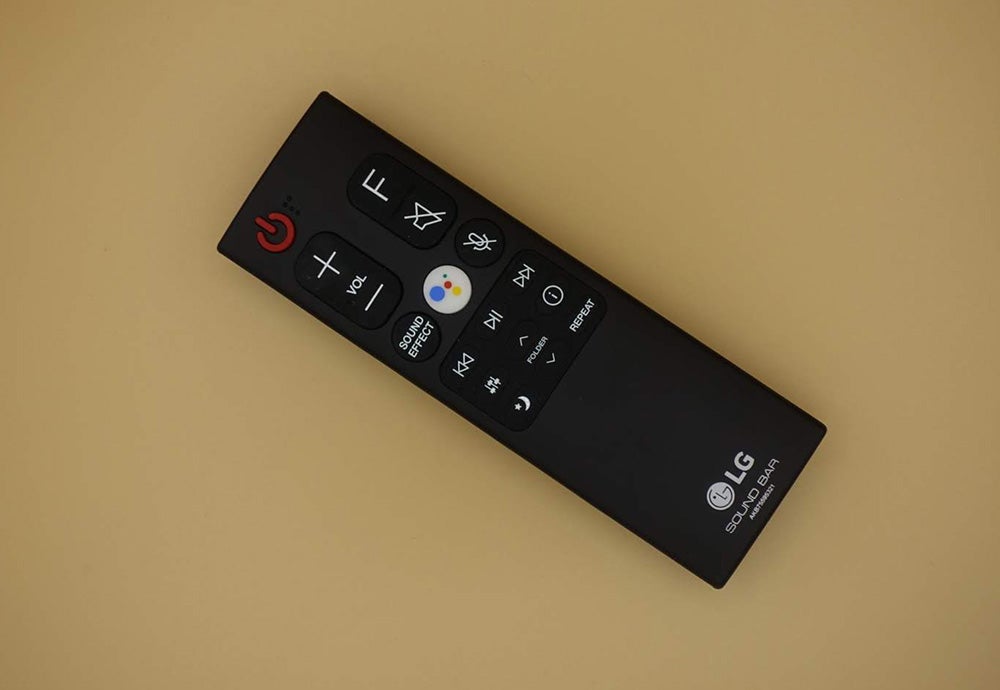 The included remote is small and somewhat fiddly. Some buttons are self-explanatory; others less so. You’re unlikely to use some of these buttons if you’re a casual user, but the F button (Function) would be more appropriately named “Inputs”. Sometimes, simplicity is the ultimate sophistication.

If you’re not using Google Assistant via your voice, there’s a GA button plonked dead-centre on the remote to engage the service via a press of a button.

LG SL8YG features – Not enough HDMI connections, although Atmos and DTS:X is welcome

Turn the bar over and you’ll find a recessed port for connections. The LG SL8YG has HDMI-out (ARC), HDMI-in (4K HDR10/Dolby Vision passthrough), USB and optical – which is a rather scant selection.

However, what the SL8YG lacks in physical connections, it attempts to make up for in wireless connectivity with built-in Chromecast, Wi-Fi and Bluetooth 4.2. Is it enough to make up for the lack of HDMI ports? Not quite, but Bluetooth – and especially Chromecast – open up a raft of streaming possibilities (such as Spotify) from different sources. 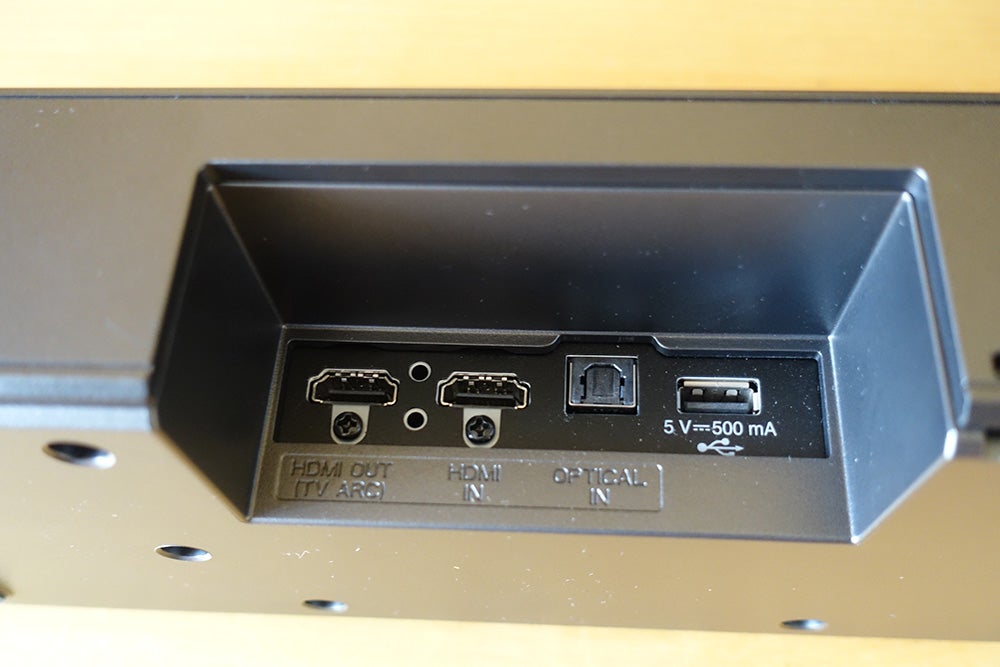 The soundbar can switch through several sound modes (Standard, Bass Blast, Movie, Music and Adaptive Sound Control) for TV content, but can’t be used during an Atmos or DTS:X track, and nor can Night mode, which reduces the intensity of a soundtrack. Sound tuning has been included for tweaking the various speakers and channels (including overhead).

Google Assistant integration is, well, more integral than it was in last year’s SK10Y, which only worked via another GA supported speaker. 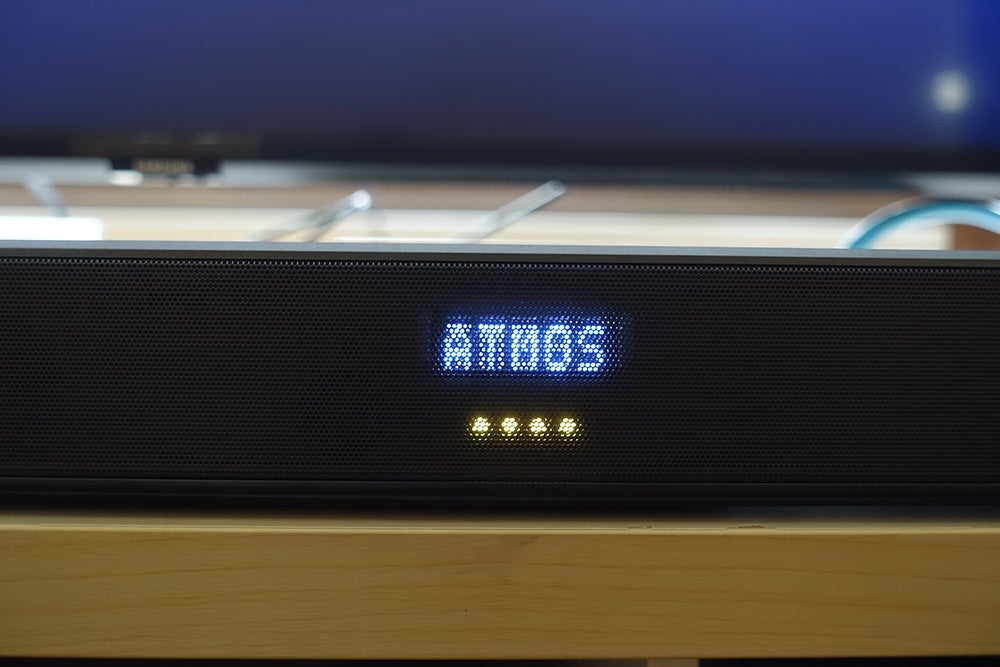 Say “Hey, Google” and ask “what’s the weather like?” and the SL8YG will return the request with information specific to your area (as long as it’s aware of the area you’re in). Google Assistant understood most queries we put to it and responded fairly quickly to them, although it helps to be quite clear in your enunciation.

In terms of audio formats, the LG SL8YG covers 24-bit/96kHz High Resolution Audio, the aforementioned Dolby Atmos and DTS:X, as well as LPCM, Dolby audio, DTS-HD MA among other standard soundtracks. Audio formats cover the basics and include FLAC (up to 192kHz), AAC/AAC+, WAV, MP3 and OGG (up to 48kHz).

Bear in mind that the SL8YG comes with a compromise in terms of its “surround sound” credentials – in the sense that it can’t produce one. At least not in an enveloping manner.

For that you’d need the additional SPK8-S wireless rear speakers (£149), which turn it from a 3.1.2 system to a 5.1.2 surround system – and at £849 tops, it isn’t too expensive in the grand scheme of things (at least not compared to the £1499 Samsung HW-Q90R). Alas, without these speaker the SL8YG’s performance is front-heavy.

Despite that, the LG SL8YG generates a comfortably big sound, but not to the point where it encompasses the room. Mission: Impossible – Fallout on 4K Blu-ray produces action in heights with numerous moments in the film, especially evident in the scenes that bookend the middle act’s thrilling chase sequence through Paris, where an helicopter approaches a landing spot and a train passes overhead during a tense scene. 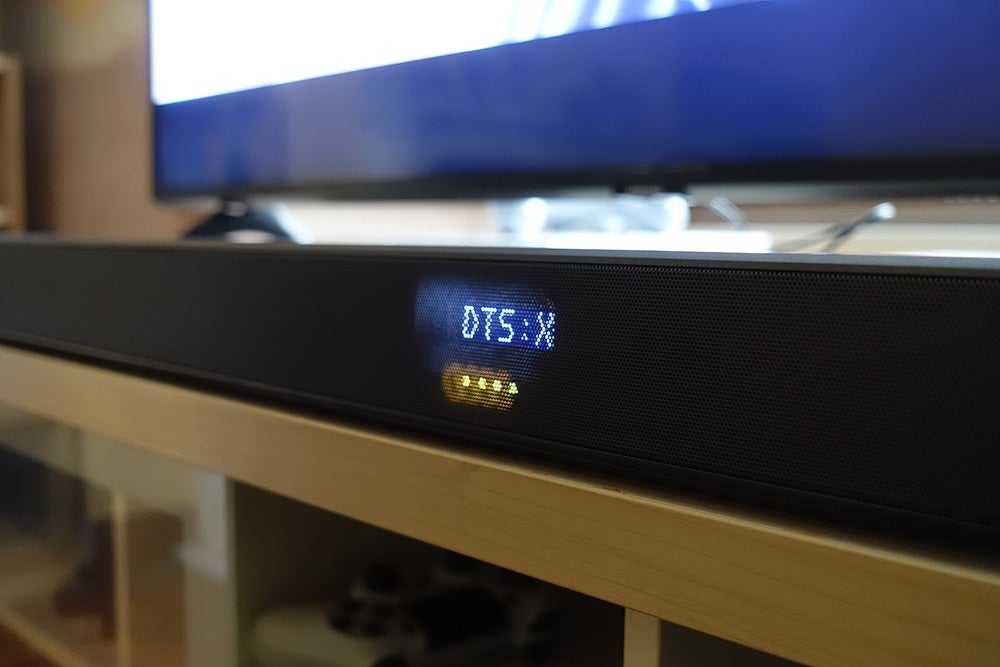 Fallout is an explosive and loud film, which doesn’t help the SL8YG’s cause with clarity. In action-packed sequences dialogue is difficult to hear, despite the soundbar’s dedicated centre channel. There’s a similar feeling in the opening of La La Land; the opening musical act can sound congested in some moments.

A spin of Blade Runner 2049 and again the SL8YG’s confidence with height channels comes to the fore. Listen out for the Spinner landing over Sapper Morton’s farm in the opening scene – with Hans Zimmer/Benjamin Wallfisch’s moody, ambient and expansive score enjoyably conveyed as well as a strong, sure-footed bass performance. 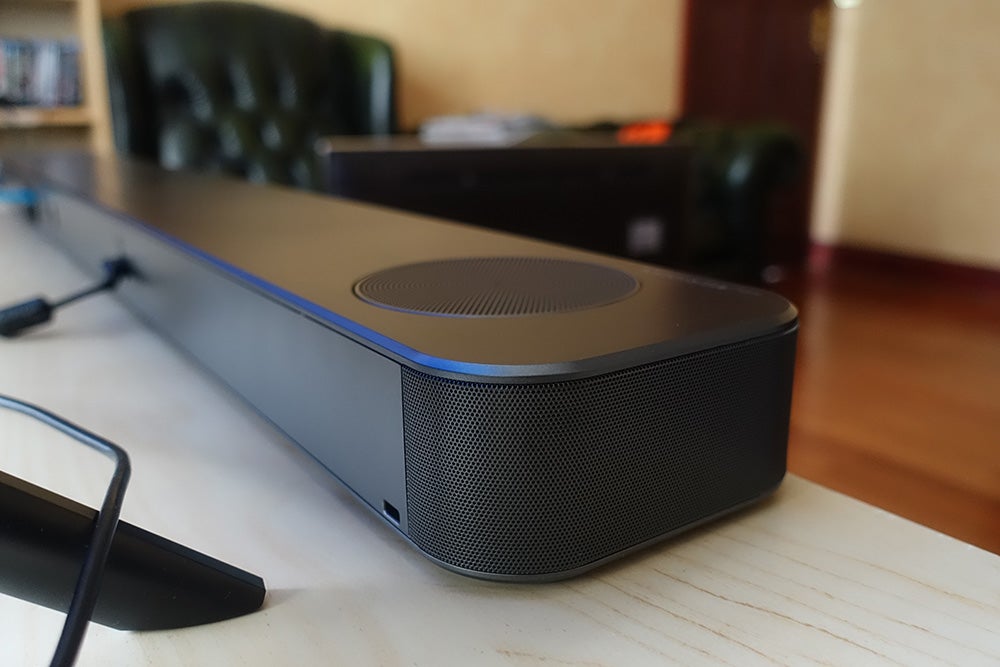 The Atmos track on Darren Aronofsky’s Mother! is an excellent test for quiet and loud moments, and the LG SL8YG survives its encounter with this demanding soundtrack just about intact. Again, that feeling of a congestion is never far away, especially during the frantic (and compellingly weird) sequence that brings Mother! to its finale. The SL8YG makes a decent attempt at replicating the intensity of the sound design with detail and clarity.

Bass is smooth, powerful and well integrated into the action. However, you are left wondering just how much better it would be if it had rear speakers to complement it. 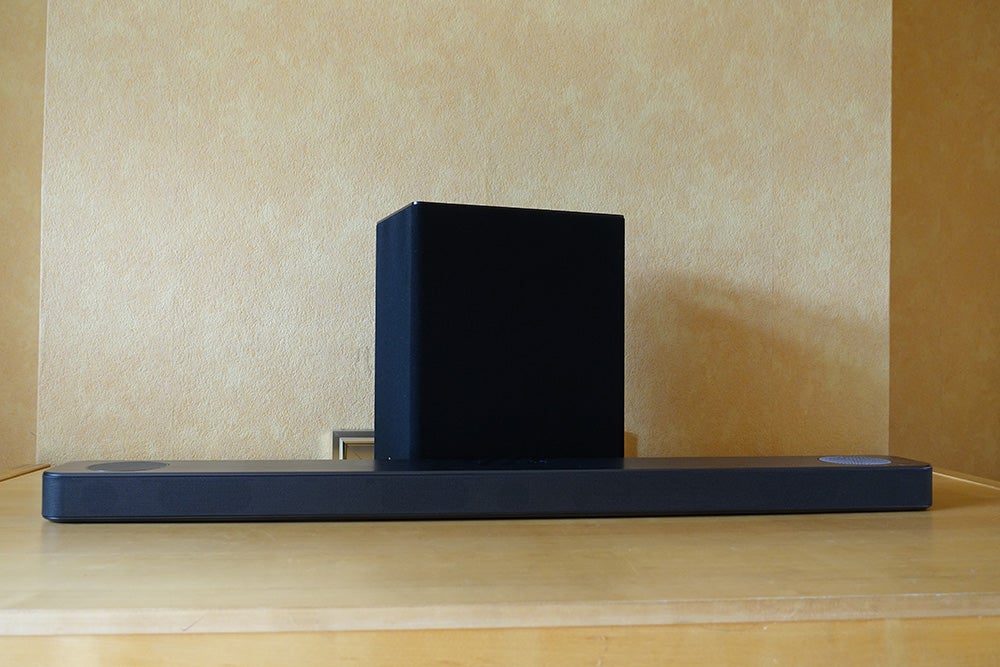 Switch to DTS:X with Get Out (also on 4K Blu-ray) and the soundbar delivers an enlarged sense of space. Dynamics are excellently orchestrated with numerous highs and lows, with the jump scares in particular are smoothly done.

As for music, the SL8YG puts in a generally fine performance. Despite assistance from Meridian on its top-range soundbars, the stream of If Beale Street Could Talk on Spotify Connect lacks a sense of weight and presence. Clarity is good and while it’s able to go loud, it has a tendency to sound thin.

Should you buy the LG SL8YG?

With the SL8YG soundbar, LG aims to cram all the features you’d need into a couple of units. It offers convenience – not many have the space for a speaker package setup and an AV amplifier to power it. However, in terms of “genuine” surround sound it presents a compromise, especially without the inclusion of the SPK8-S rear speaker package.

If you’re after a speaker package that doesn’t crush the wallet, the VIZIO 36in 5.1.2 Soundbar system costs £599 and does include two rear speakers into the mix. Note that it lacks the versatility of the SL8YG in terms of audio support, with no DTS:X or Hi-Res Audio, nor does it passthrough 4K in Dolby Vision.

There’s also Harman Kardon’s Citation Bar, a premium effort that costs £300 more than the LG SL8YG yet doesn’t have either Atmos or DTS:X. Arguably, it shades the SL8YG in the aesthetic stakes and offers a more accomplished treble/midrange performance, but the omission of a subwoofer means bass performance is reduced.