The Sonos Move is an excellent first Bluetooth speaker from the company. It does stretch the definition of a “portable” speaker, but has all the features you’d expect from Sonos, including fine sound.

The Sonos Move is the first ever Bluetooth speaker from the Californian audio brand, and with Auto Trueplay it can adapt to its surroundings on the fly.

Sonos is best known for its home audio speakers, but the Move speaker is a shift for the company. It’s Sonos’ first Bluetooth speaker and its portable, meaning you can take it outside, but it can also act like any other Sonos speaker when used in the home.

So, is the Move another brilliant speaker from the company, or has it bitten off more than it can chew?

In a market defined by smaller proportions and convenience, but at 240 x 160 x 126mm (HWD) and with a weight of 3kg, the Sonos Move is no shrinking violet. That said, it doesn’t feel particularly heavy to lift thanks to the integrated handle on its rear. It’s svelte shape does makes it easy to position on a shelf or otherwise, which lessens the impact of its size.

Despite its attempts at portability, I’m still unsure as to whether it’s a speaker you’d want to take out of the house. It’s fine for taking to the garden, but hefting it out to the park? I’d feel you’d want something smaller. “Portable” isn’t the right word for it; an “outdoor” speaker sets expectations better. 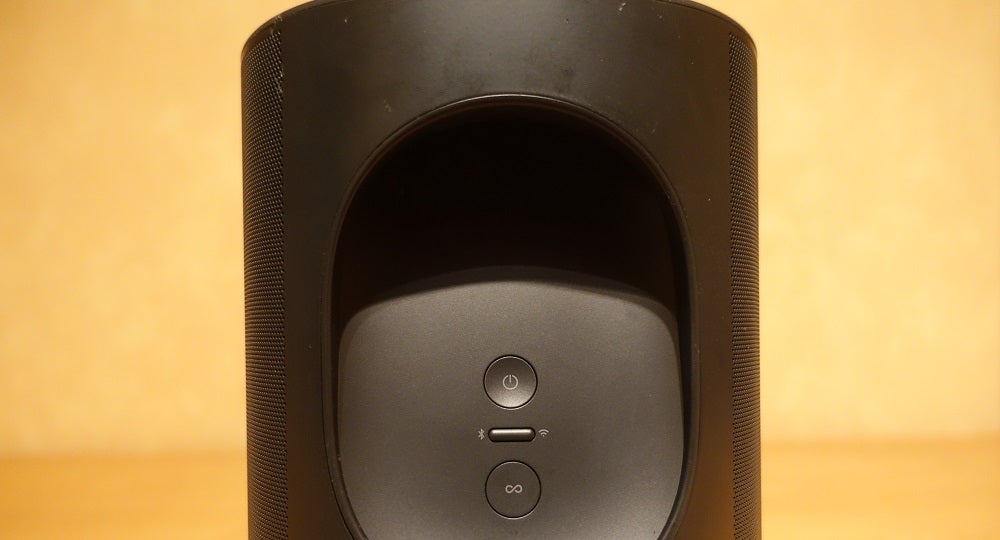 Build quality is best described as durable. While I wouldn’t drop the speaker from a significant height, letting it go from around 15-20cm was sufficient to prove its sturdiness – although in the process I did manage to chip it but the speaker still works fine. Truth be told, I’d be more concerned about the surface onto which the Move falls on, rather than the speaker itself.

An IP56 rating – the highest without submersion in water – means the Move is well-guarded against dust, water, mud or whatever else you feel like throwing at it. It comes in one finish – Shadow Black – and there’s a reason for that. Shadow Black insulates the Move from overheating and while this is unlikely to be a problem in the UK unless we experience a balmy summer. It can also survive temperatures down to -10°C. 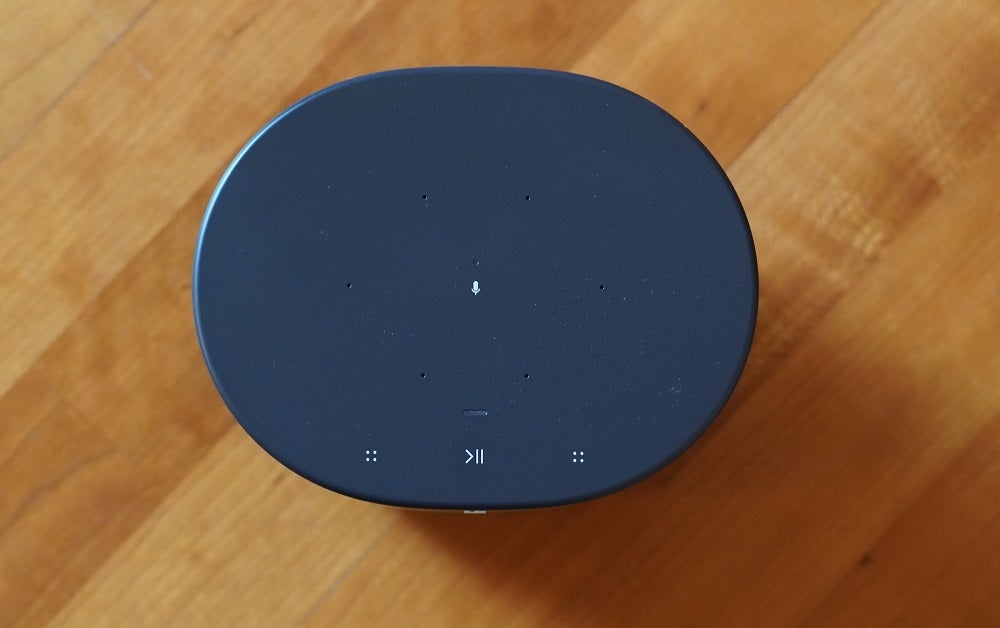 Around the rear are three buttons: power; switching between Bluetooth and Wi-Fi, and a “Join” button. When swapping between Wi-Fi and Bluetooth you’ll hear a tone, and in Bluetooth mode the Move will automatically connect to the last known device.

On the top plate is an LED status light: white indicates Wi-Fi and blue is for Bluetooth. Also here are built-in far-field microphones for voice control and a touch capacitive button for start/stop playback.

Plug the Move into its charging base and setup will be completed over Wi-Fi. If this is your first Sonos speaker then you’ll need to download the Sonos app. The app is one of the better efforts available, and features Spotify, Tidal and TuneIn integration, along with support for Amazon Alexa and Google Assistant. 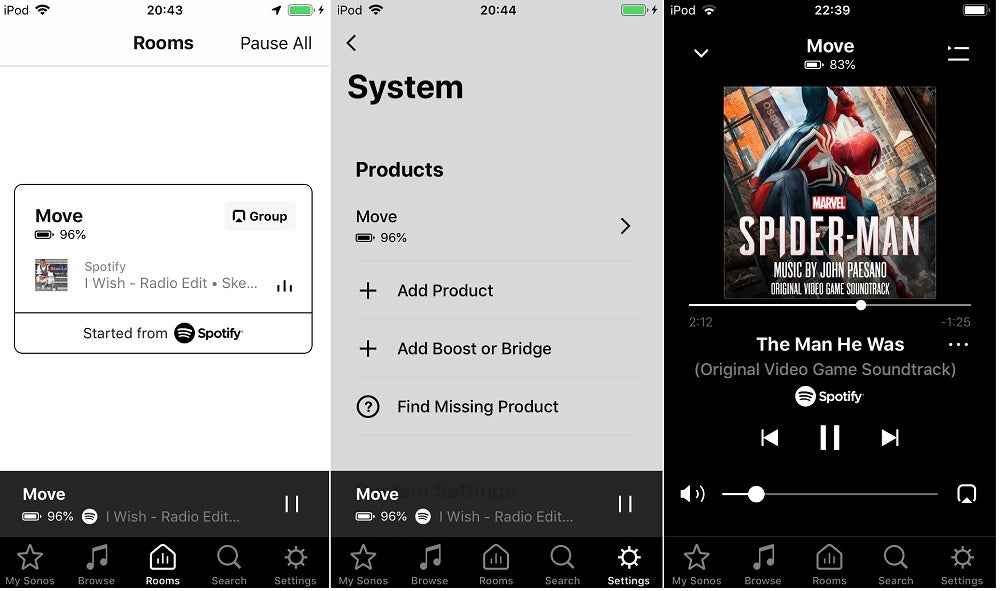 You can add it to an existing Sonos setup, create a multi-room grouping, search for music, change settings and keep track of battery life. I’d suggest setting updates to “automatic” to ensure music playback isn’t interrupted.

It’s one of the more complete control apps available: slick and easy-to-use – although it could be more responsive at times.

*This review refers to the set-up process on the old control app. The Sonos Move is also compatible with the Sonos S2 app.

When indoors, the Move works like any other Sonos speaker. This allows access to built-in Alexa and Google Assistant, with AirPlay 2 supported which in turn means Apple users can use Siri for hands-free assistance.

You’ll need to download the Alexa or Google Assistant app and sync them to the Sonos app. I found synching to be fussy at time, but once done voice control is quick and responsive, whether it’s asking for weather updates, bringing up playlists or searching for upcoming events. 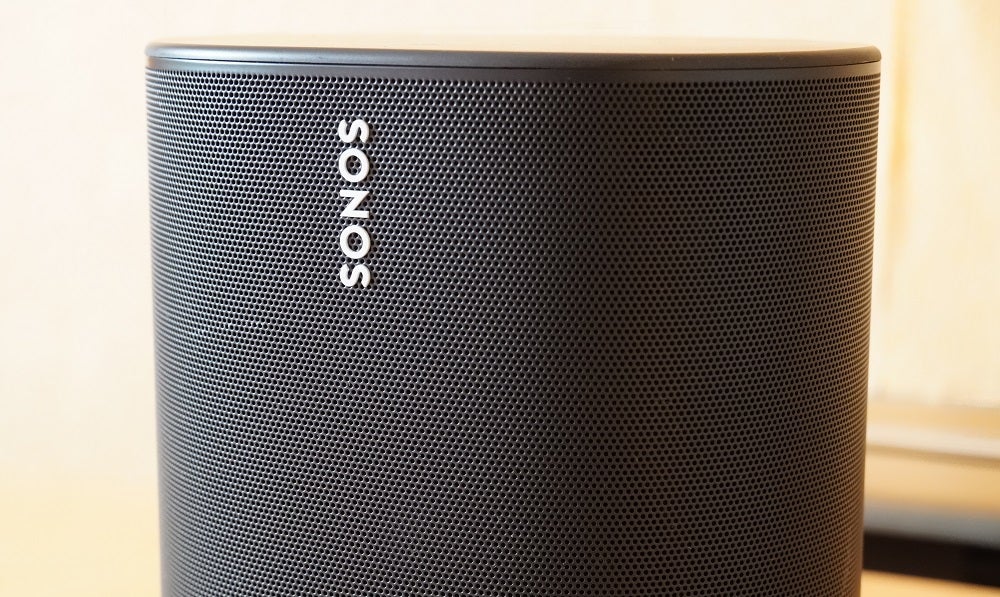 The Move also heralds the introduction of Sonos’ Auto Trueplay feature. Trueplay tunes a Sonos speaker to its environment but as it was only available on iOS – Sonos trusts the quality of the mics in iOS more than it does with Android’s varied manufacturers – Auto Trueplay democratises the process by removing the need for the app completely.

It’s constantly listening and adjusting the music depending on the speaker’s placement. The effect might be subtle at first, but you’ll soon be able to tell the moment when the speaker acclimatizes to its new surroundings, with the process taking not more than a few seconds.

According to Sonos the battery lasts for 10 hours of continuous play, and can be replaced. If the battery becomes damaged or loses its charge, Sonos will send out a replacement along with tools and instructions on to how to get the job done. The battery is charged via a charging base on which it sits. There’s also a USB-C cable in case you don’t have access to a mains power supply. 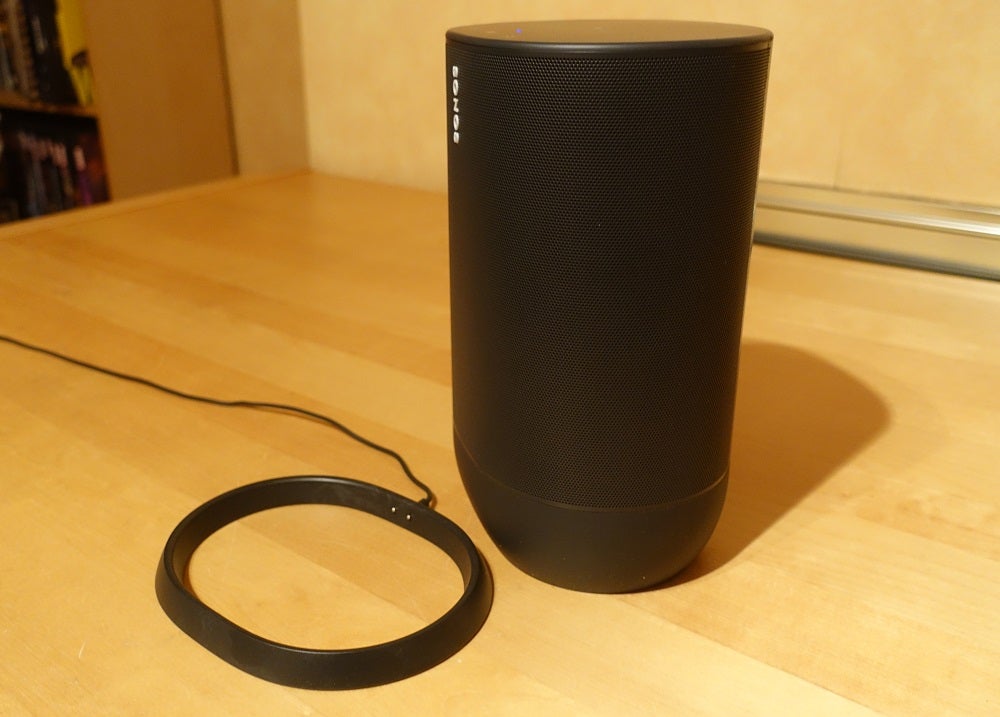 Tap the power button – a long press turns it off – or leave it for 30 minutes and the unit will switch into low power mode. You can wake it for any tasks or just leave it for up to 120 hours.

For connectivity 2.4GHz and 5.6GHz wireless bands are supported, but Bluetooth is only 4.2.

Compared to the Marshall Tufton speaker, the Move has plenty more detail than its “outdoor” counterpart, with a sound that’s cleaner, more precise and after a considerable amount of testing, more in the realms of neutrality. Its confidence with low-end frequencies is impressive and malleable too; able to deal with tracks that demonstrate tight bass or handle music with a more rumbly low-end.

It’s a big sound, although if you’re indoors it’s best to set the volume somewhere around the middle. Give it more space and you can let it rip. It can lose its composure at high volumes, but if you’re in a big, open space, this is unlikely to be an issue.

There appears to be the slightest of differences between Wi-Fi and Bluetooth, with the latter ever so slightly reined in and perhaps lacking in terms of subtlety compared to Wi-Fi – but in all honestly that’s probably a nit-pick. 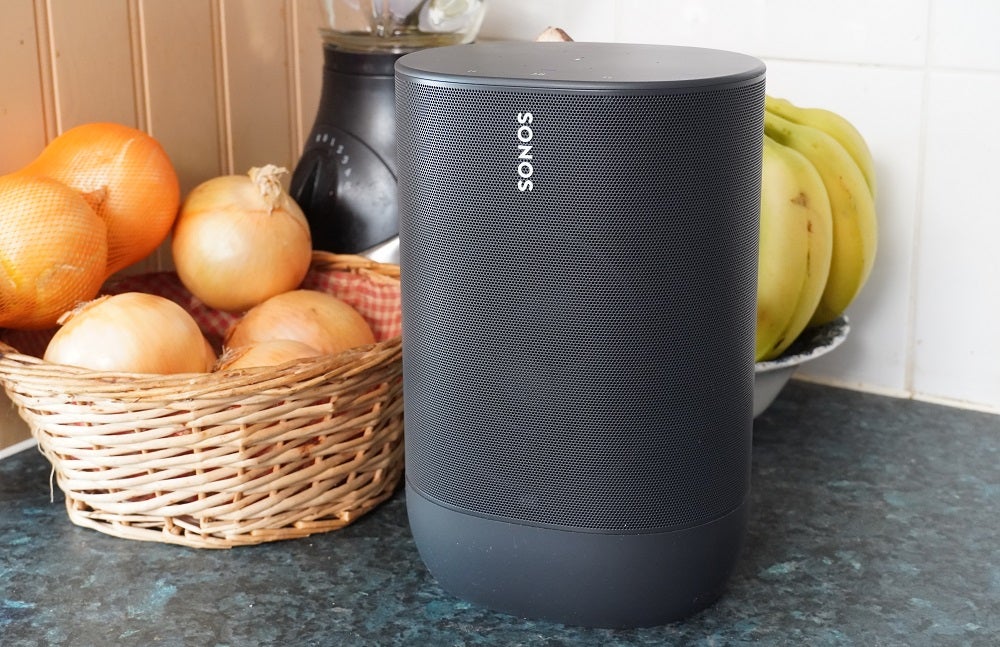 It arguably isn’t the clearest, textured or most detailed performer, especially for its £399 price tag, but it’s nevertheless an easy listen. The speaker presents sufficient colour and detail from John Legend’s voice in Refuge from the Get Lifted album, and a Tidal stream of Sting’s It’s Probably Me is an enjoyable performance.

Dynamically, it’s sure-footed. Perhaps the highs aren’t as far-reaching, but the Move shows plenty of reach when listening to the soaring Hope (Xavier’s Theme) via Spotify. There’s an impressive weight to its presentation, as the Move is a speaker that’s not afraid to give it some welly.

It’s energy and good timing pushes Justin Hurwitz’s The Landing from his First Man score, and that sense of propulsion helps with the ELO’s energetic Mr Blue Sky.

You want power? The Move is happy to accommodate with a track such as Linkin Park’s With You or Kanye West’s appropriately named Power delivering plenty of it.

In fact, big or small, the Sonos Move is more apt for your garden space. Play some tunes while doing the gardening or during a gathering of many people and that’s where the Move becomes more appealing

Nevertheless, if you’re a existing Sonos user the Move would make sense if you’re someone who wants to take their music out of the house without sacrificing on quality.

The Move sounds very good, has plenty of features and is simple to use. Short of launching a missile at it, it’s likely to survive most accidents. When considered in this context, there’s not anything off the top of my head that’s like it.

Weighing 3kg, the Move isn’t really a speaker we’d call portable. Sure you can take it with you thanks to its integrated handle, and it’ll last for a long time with its 10 hour battery, but we feel it’s more a speaker for the garden or nearby open spaces, than any far journey you’re likely to go on.

A price of £400 is a steep ask in a portable speaker market. There is no speaker that can do what the Move does, but will people pay that much for it. We’re not wholly sure, despite the Move being a quality, multi-purpose speaker. 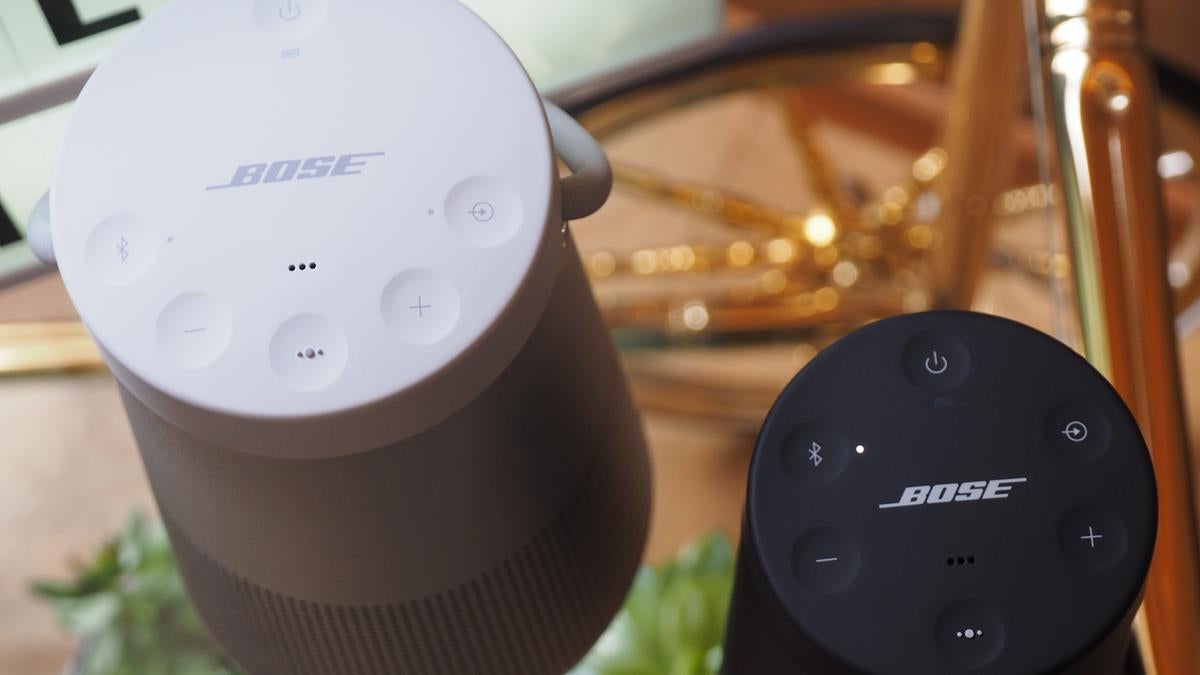 Is this speaker waterproof?

The speaker’s IP56 rating means the Sonos Move is well-guarded against water, but shouldn’t be submerged.

Does it have a companion app?

Yes, the Sonos Move is supported by the official Sonos app.

Is this speaker wireless?

Yes, the Sonos Move is wireless and designed to be a portable speaker.

AirPlay 2 is the second generation of Apple’s proprietary wireless streaming tech, which is built into all of its hardware products (and supported by many others). It’s designed to pass content from your Apple device – music, video and photos – to a compatible receiver over your Wi-Fi network such as a TV, wireless speaker, AV receiver etc.