They might be subtle improvements, but the new Amazon Fire Stick is all the better for having them

What is the Amazon Fire TV Stick?

The Amazon Fire TV Stick is the company’s second generation of its cheapest video streaming device.

You can stream from Prime Video and Netflix, as well as catch-up services such as BBC’s iPlayer, ITV Hub and All 4. There are plenty more besides video apps, including Music Unlimited and Spotify, along with access to Amazon’s growing games library.

So, what’s new? For a start, the interface has been overhauled to make it look more accessible. This change will filter down to older devices over time, though, as will the Alexa voice control, so the real benefits of the new Stick are its faster processor and improved Wi-Fi.

The Amazon Fire TV Stick only goes up to Full HD 1080p resolution, and goes up against the aging (but still excellent) Chromecast, or the platform-agnostic Roku Express.

Amazon Fire TV Stick design and build — On the chunky side

The Amazon Fire TV Stick looks like a memory stick on steroids and plugs into the HDMI port on your TV. It’s a neat all-in-one design housed in plastic. It creaks a little if squeezed, but feels tough enough for purpose. 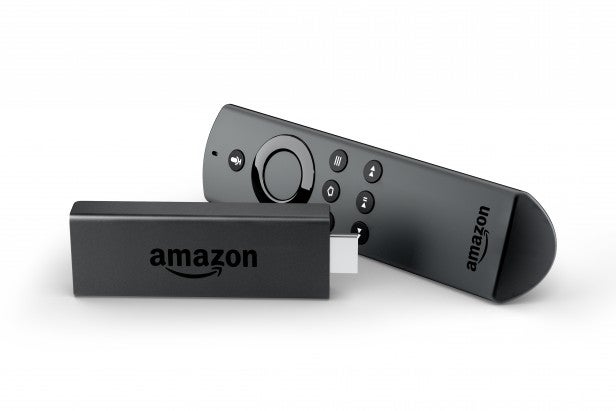 At 9cm long and around 3cm deep, it protrudes from your TV back panel, particularly when you consider making room for its Micro USB cable power supply. Thankfully, if this is too much of a squeeze, Amazon includes an HDMI extender in the box to free up some space.

The accompanying remote is the same one you’ll find across all of Amazon’s Fire TV. It’s pretty simple, offering a D-pad for navigation, a handful of playback controls and the all-important voice input key. It’s nice that this is included now, although the iOS and Android app does an equally good job and can activate the same Alexa commands.

Setting up your Fire Stick is really simple. Plug it into a spare HDMI slot and its USB cable into a power source. Some on-screen instructions will get your Alexa remote paired and the Fire TV Stick hooked up to your home network. Once you’re signed into your Amazon account, you’re ready to go.

If you’re familiar with the older Fire TV Sticks, you’ll notice that the interface has been redesigned. The main navigation menu has moved from the side to along the top, and a new picture-led carousel with suggested content dominates the top half of the screen.

The idea is that the Fire TV Stick will learn your viewing habits over time and tailor content to you, with video teasers to draw you in. During a week’s testing, the selection it surfaced improved to include programmes and films I’d be more likely to choose, including content from other providers such as Netflix. 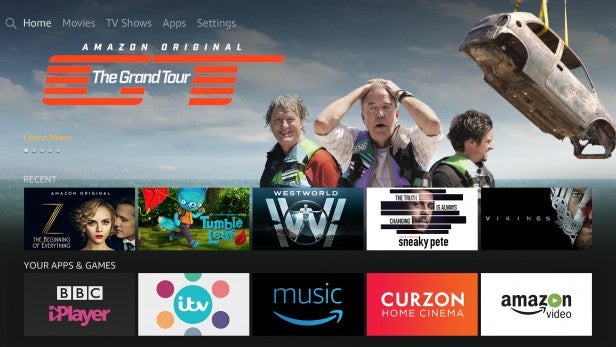 Detail pages have been improved too, with a large picture backdrop and more in-depth programme information. Once you start to watch a show, clicking upwards on the remote will open up Amazon’s X-Ray IMDb feature, for finding about more about the cast and background information regarding the programme.

Besides downloading apps, I found the homepage was the only place I needed to be. In a side-scrolling menu beneath the carousel, you’ll find your recent shows and apps for quick access. Beneath that, you can browse and organise your downloaded apps, scroll through several menus of Prime suggested content, and even one for Netflix (dependent on your subscription).

That’s what’s particularly refreshing about this particular version of the Amazon Fire TV Stick. While Amazon Prime content is still its bread and butter (and dominates its menus) it’s not as difficult to find content from other providers as it was before.

For example, Amazon Prime offers Breaking Bad as a paid-for box set, whereas if you’ve signed up to Netflix, it comes as part of your subscription. If you search for it, Fire TV will suggest you watch it on Netflix first, with the option to buy it in a “More Ways To Watch” menu. It feels more like it’s working to the benefit of the user, and not for itself, which is how it should be.

It’s still very much a device aimed at Prime subscribers though, and I’d certainly recommend signing up for the service to get the most out of the various services it offers. With its new monthly subscription option (£7.99/$8.99 per month), it’s much more accessible now too. If you’re not interested in Prime whatsoever, then you may well find that you’re better serviced by a Chromecast or similar streaming stick provider such as Roku.

Alongside its new interface, the Amazon Fire TV Stick has had some hardware upgrades too, including a new quad-core processor and improved Wi-Fi.

The new chipset is said to be 30% quicker, while the 802.11ac Wi-Fi ensures more stable streaming, quicker downloads and faster buffering. You’ll really notice this improvement if your Fire TV Stick is a little further away from your router too, thanks to a better performance range.

There’s still 8GB of on-board storage for apps and games and the same 1GB RAM as its predecessor, which is enough for its purposes

Scrolling through the menus, it’s clear the new quad-core processor has given the Fire TV Stick a boost of power. It’s slicker to browse and faster to load, as you flick in and out of menus and search for content.

Voice commands work really well, too. Rather than using the Alexa wake command, just press a button on the remote, hold it in and speak.

While I’ve seen voice remotes before, with the likes of the Fire TV Box, this is the first time that Alexa has been built into a Fire TV product. She’s cleverer than what you’d  get from a standard voice command system, and there’s a lot more than you could previously do before.

The results are fast and for the most part accurate. You can search by actor, genre or film name, and during my tests, Alexa hadn’t misunderstood a single command that I’ve put to her. 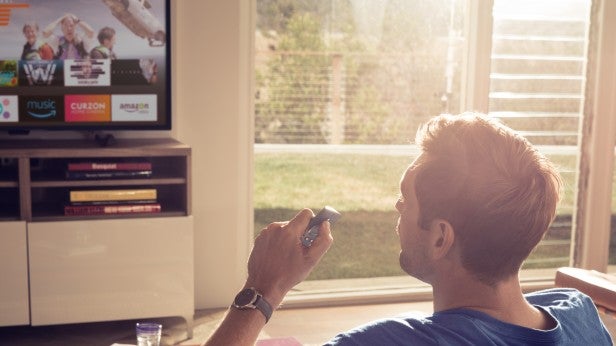 Even better is the fact that Alexa functions much like she does on Amazon Echo devices, so you can control elements of your smart home too.

That said, some of the returned suggestions aren’t always as helpful they could be. Search for Brad Pitt and the returned results offers up five TV shows and movies that don’t feature the actor at all, before bringing up movies like Seven and Inglourious Basterds. Similarly, a search for Jeremy Clarkson suggests a number of unconnected films and shows before Amazon’s own The Grand Tour series surfaces.

Related: How to install Kodi on a Fire Stick

Specific movie or TV show searches fare much better though, and offer up similar titles as well direct matches. Searching for The Grand Tour this way brings up Top Gear as suggested watching, which makes much more sense.

Alexa’s talents don’t stop there though. You can also ask her about the weather, sports scores, check in on the news, create a shopping list or get her to set a timer. New functionality also means you can ask her to fast forward or rewind during Amazon shows, which is seamlessly done.

The language you can use to control her is also pretty flexible too. She’ll respond to “fast forward five minutes” in the same way she does “skip ahead five minutes”, which makes using the Fire TV Stick feel much more intuitive and natural than previous voice control systems.

And, Alexa also lets you control all of your smart home devices, too, in much the same way as an Echo device. You need to ensure that you have a compatible smart home device, that it is on the same Wi-Fi network and complete set-up through the app before you can begin.

When controlling smart home devices, there’s no need to have the TV turned on, either. Just grab the remote, hold the microphone down and make your request, such as to turn on the lights, and Alexa handles everything else. This can be a handy way of controlling your devices if you don’t have an Amazon Echo or Dot speaker in the same room as your Fire TV.

But what if you have an Echo in the same room as your Fire TV? Well, Amazon has another trick up their sleeve. You can use the Alexa app to link your Echo to your Fire TV, which lets you activate the voice search on Fire TV Stick via the smart speaker. And, you get pause/play control as well, so you can just say, “Alexa, Pause” and the on-screen action stops.

Admittedly, having the remote control to hand is the easier option, but if you get a phone call or can’t find the remote, using your voice is handy and convenient.

No matter what you’re watching, playback is stable and buffering is fast – you’ll only have to make do with a fuzzy picture for a second or two before the full resolution kicks in and pictures look crisp. By comparison, Chromecast takes a little longer to even out its picture and isn’t quite as fast to load content.

Should I buy the Amazon Fire TV Stick?

The 2nd generation Amazon Fire TV Stick doesn’t do anything revolutionary, but it does make a good product even better.

The Alexa voice commands are a great way to navigate the menus, and the extra speed from the new processor and improved Wi-Fi makes using the Fire TV Stick a breeze.

They might be subtle improvements, but the new Amazon Fire Stick is all the better for having them.