If you’re after a soundbar that combines performance, style and ease of use without incurring (too) much of an expense, you should hear (and see) the DALI Katch One. However, the lack of a subwoofer means bass is less apparent and this isn’t the soundbar to go for if Atmos/DTS:X are wanted.

DALI’s Katch One is the Danish brand’s first dedicated TV soundbar, carrying with it a degree of flexibility in terms of mounting options, sound modes and connectivity

What do you want a soundbar for? It’s a genuine question.

Do you want to get as full-on a home cinema experience as possible, complete with Dolby Atmos 3D sound, without filling your room (and your ceiling) with speakers? In that case, you’re looking at four figures, easy, with the best performance of all costing well over £2k and wearing a ‘Sennheiser’ badge.

Do you just want to improve on that thin and weedy sound your flatscreen TV makes, add a bit of body to your audio experience? That’s easily done – there are numerous brands ready to part you from £100 or so to make your TV sounds marginally less rubbish than it did before.

What if you don’t want to spend a fortune, though, but want more of an audio upgrade than ‘a bit more bass’? What if, on top of that, if you want a soundbar that can also function as a wider audio system – and do so credibly?

Well then, you should consider the new DALI Katch One.

DALI Katch One price and availability

It’s been a fair while since DALI launched a soundbar (the ‘also a full-on audio system’ Kubik One was the company’s last toe in the water) – and at first glance it might appear that the Danish specialist has simply spent time carefully stretching one of its highly regarded Katch wireless speakers. You know how Mercedes turns one of its saloon cars into a diplomat’s limo just by making it much longer? A bit like that.

However, there’s more to it than that. This is a tall, slim soundbar (it’s over 16cm tall but less than 7cm deep), and at 86cm it’s about the same width as a 40in TV (remember them?). It can be wall-mounted, using the integrated hook slots at the back of the cabinet – at 3.7kg it’s not much of a strain. 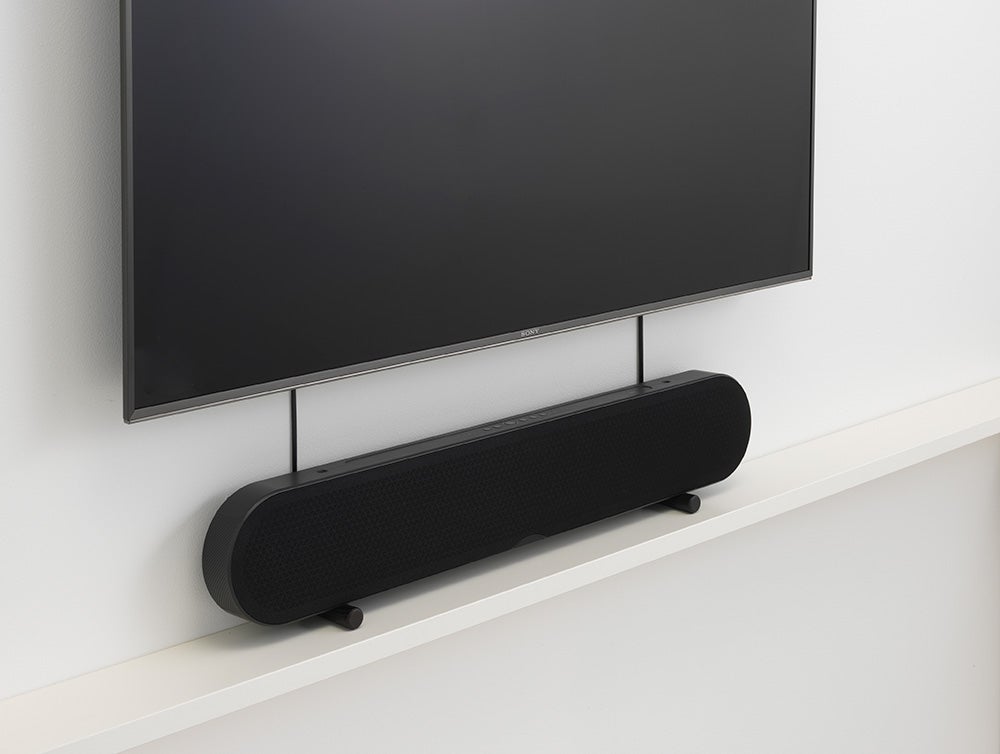 It can also be hung from the wall using the couple of leather straps provided in the box, or stand on its own two real-wood feet (also provided). Because sometimes the Danes like to remind us all that they know exactly what they’re doing when it comes to design.

Katch One is available in three finishes (‘ivory white’, ‘mountain white’ and ‘iron black’), and from the dead-ahead it looks beautifully uncluttered in any of them. All physical controls are along the top of the chassis, all inputs and outputs are recessed into the rear.

The swatch of acoustic cloth across the front is interrupted only by the IR sensor for the remote control. It’s a tidy, coherent looker than manages to look a little more stylish and a little less functional than the norm.

DALI Katch One Features — Plenty of ways to get audio in, whether it’s HDMI or aptX Bluetooth

So the Katch One is all serenity above the surface – but, like a swan, there’s some furious action going on underneath.

The DALI features a total of 10 speaker drivers. A pair of 21mm soft dome tweeter sit above a couple of 89mm aluminium mid/bass drivers at either end of the front of the soundbar. Closer to the centre there are a couple of 114mm steel-cone passive radiators for extra punch.

At the rear of the bar there are two further aluminium mid/bass drivers and two more passive radiators. The six drivers that need power are treated to a total of 200 Class D watts. 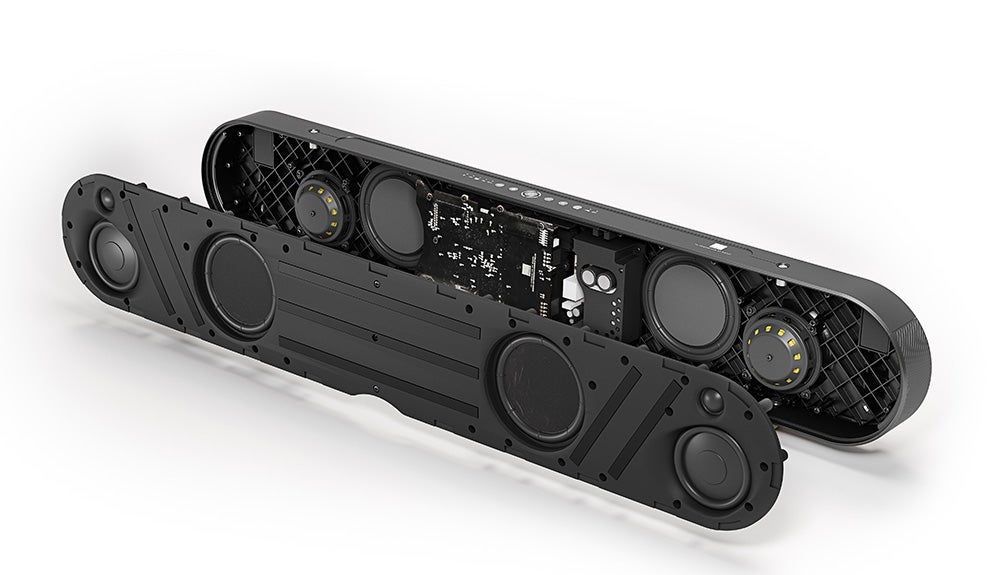 There are plenty of ways of getting audio into the bar too, so that amplification (and all those drivers) can do their thing. There’s an HDMI ARC socket – so, at its simplest, a single HDMI cable from your TV to the Katch One is all you need to give your audio experience a big boost. A couple of digital optical sockets allow connection of a CD player, games console or what-have-you.

There’s an analogue 3.5mm input, a pre-out for a subwoofer and a USB socket. This last can be used for servicing, or as a power source. Naturally the DALI is equipped for wireless connectivity too – it features aptX Bluetooth 4.0. All the digital information entering the Katch One is handled at a native 24bit/96kHz by the digital-to-analogue patch embedded in the direct digital amplification arrangement. 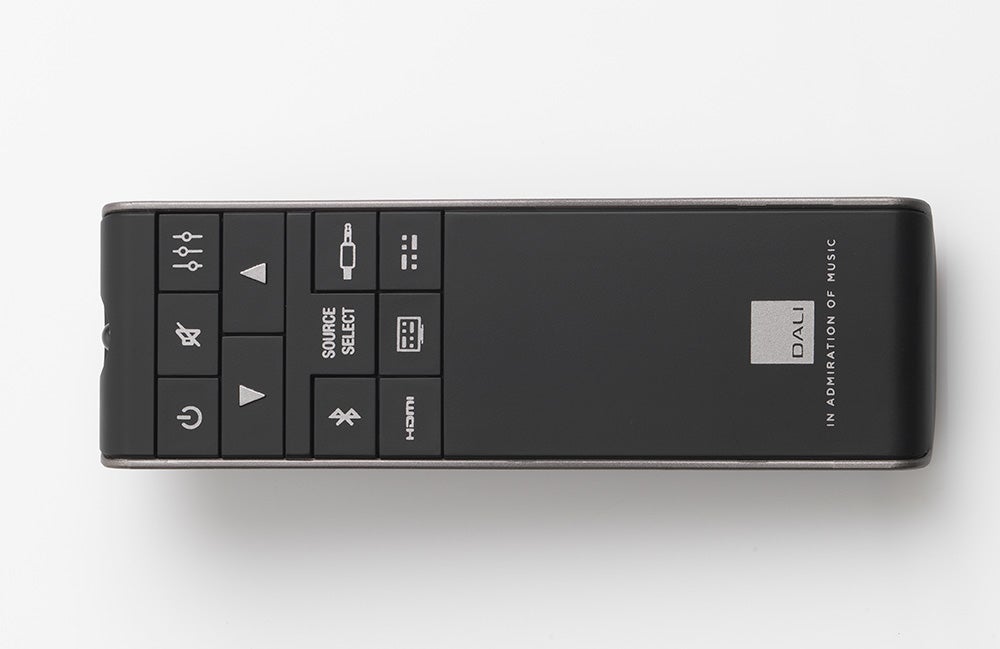 Switching between inputs, adjusting volume and so on can all be taken care of using the controls on the soundbar, but there’s also a little remote that controls every function. That includes the DALI’s two sound modes: ‘wide’ and ‘focus’.

So it’s hardly at the cutting edge of surround-sound algorithms but, as far as it goes, the Katch One is a thoroughly specified and engineered device.

DALI Katch One Sound Quality — Subtle and well-balanced, but the lack of a sub means bass could be better

It’s safe to say Katch One isn’t one of those ‘grab you by the lapels’ speakers. Some soundbars like to pummel you with bass to try and impress, some manage to sound loud even when they’re playing quietly. Compared to one of these blustering devices, the DALI is – initially, at least – quite understated. Undemonstrative, even.

Give it time, though, and listen closely. The well-judged balance of the Katch One’s tonality means it manages to be subtly detailed, even though it gives the whole of the frequency range full expression.

DALI is quoting a frequency response of 46Hz – 25kHz, which seems realistic – and it also means the Katch One isn’t the most bass-heavy soundbar this sort of money will buy you (hence the subwoofer pre-out). It is among the most articulate and insightful, though.

An impeccably mastered 4K UHD Blu-ray of Christopher Nolan’s enduring The Prestige demonstrates much of what the DALI does well. With the audio mode set to ‘wide’, the presentation is, well, wide – considerably wider than the soundbar itself.

The midrange, where the bulk of any movie soundtrack resides, is nuanced and loaded with fine detail, and treble sounds shine crisply. Down at the bottom end, there’s not quite the extension some rivals offer, but there’s a stack of texture and tonal variation. 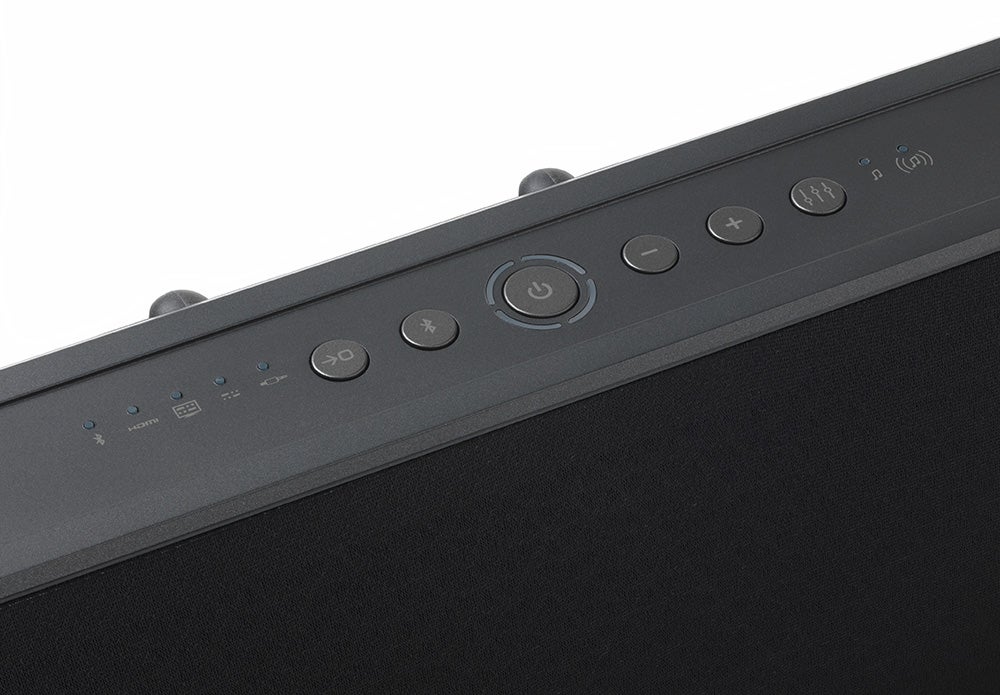 The overall presentation is reasonably dynamic, and the DALI does excellent work with low-level atmospherics. The film’s few moments of real Hollywood-style attack are short of absolute power and punch, but you’re never left in any doubt as to the film-maker’s intentions. Anyone who lives on a diet of Marvel movies, though, may find the DALI wanting where sheer grunt is concerned. The rest of us can get on with admiring its deftness and detail.

Katch One fancies itself a whole audio system, of course, and a switch to a CD of Yeah Yeah Yeah’s Fever To Tell (via one of the optical inputs and dealt with by the DALI’s DAC) establishes its credentials. ‘Wide’ mode doesn’t help the music’s coherence much, but switch to ‘focus’ and the whole presentation becomes far more convincing.

That same winning tonal balance is evident, and the small harmonic dynamics are paid just as much attention as the more obvious ‘quiet/LOUD/quiet’ variety. Those four mid/bass drivers do a fine job of communicating all the character and individuality of Karen O’s vocal, and the Katch One brings her to the front and centre of the soundstage without estranging her from everything occurring around her. 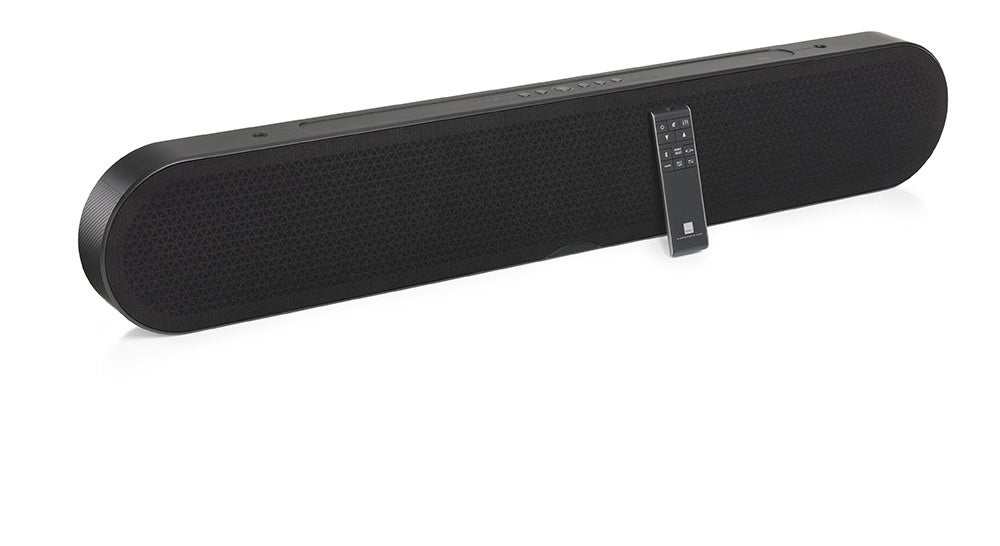 Streaming wirelessly via Bluetooth may up the convenience quotient more than somewhat, but it impacts just a little on the Katch One’s fidelity. The DALI may be able to receive and deal with an MQA file of Gorillaz’ Clint Eastwood and give it most of the weight and all the momentum it requires, but somehow the integration of all those drivers (which has been impeccable until now) suffers.

The music is exposed somewhat as a combination of distinct elements, rather than as an entirely unified whole as it is when delivered by a hard connection. Taken in isolation, there’s much to admire about the way the DALI serves up the song – the gimpy tempo is handled confidently, the keening melodica cuts through the rest of the information with real bite – but there’s not quite the previous level of unity.

So we go out as we came in, by asking ‘what do you want a soundbar for?’. If you’re trying to combine performance, style and ease of use without getting carried away in a financial sense, you should hear (and see) the DALI Katch One.

You should buy the DALI Katch One if…

As a piece of design the Katch One is beautifully simplistic in its look. It should seamlessly fit into any interior design without drawing massive amounts of attention to its self.

Of course, while the market has moved towards more complex, height-based soundtracks, the DALI shuns all of that for a more conventional approach. It is somewhat expensive for its spec, but proves to be an accomplished performer.

You shouldn’t buy the DALI Katch One if…

If you want a sensibly sized soundbar at a realistic price, it’s hard to look beyond Sonos’ excellent Beam. It doesn’t have quite the width or separation of the DALI, but it’s cheaper and every bit as forthright when it comes to movie soundtracks.

This DALI isn’t interested in object-based audio, training its sights of wrangling much more simpler soundtracks instead.