The Sonos Playbar is a lounge-unifying device that will let you dump your remote controls and your old hi-fi in the bin. For everything but the most crashing of movie soundtracks the Sonos Playbar sounds great too, with excellent clarity and an expansive soundstage. If you want to get Atmos into your Sonos system, the Arc is better suited.

While the Sonos Playbar has been superseded by the Arc, it remains a talented bar for music lovers and film fans.

When the Playbar first came out, it bucked a number of Sonos trends. It wasn’t entirely locked up within the walled garden of Sonos’ wireless system; it could be used as part of a surround set-up and you could even plug it into your TV.

With the release of the Sonos Arc, the Playbar has come down in price to around £479. Though it’s been around for several years now, it still looks good, and more importantly, sounds good.

Sonos Playbar design — Still holds up after all these years

Up until the Playbar, Sonos’ speakers had been designed to be used exclusively within the walled garden of the Sonos system. This gives you access to music libraries on your computer, along with a fairly wide array of music streaming services that includes Spotify and Deezer. The Sonos Playbar offers all this, but can be plugged into your TV, to replace its weedy internal speakers.

This explains the Playbar’s design. With a super-slim profile of under 9cm, the Playbar sits beneath your TV – either mounted to the wall or laid flat on a table – and at 90cm wide, works best with TVs 42-inches and larger.

Although it wants to melt into the background of your lounge, the Sonos Playbar is a good-looking and fantastically well-made speaker. The parts of the bar that aren’t covered by the smooth, soft fabric grille are made of aluminium – whereas many lesser soundbars are constructed of plastic. At 5.4kg, the Sonos Playbar isn’t particularly light, however build quality proves to be fantastic.

Like every Sonos product, the Playbar has very limited connections. There are two Ethernet ports, the power socket and the all-important optical input. The second of the two Ethernet ports can be used to for passthrough to media player/TV for a stronger connection. Whereas every other TV-related audio speaker has moved to support HDMI, the Playbar has a single optical audio input.

Setting the Playbar up may be a little more involved than you’d think. For starters, if you’re not going to plug the Playbar directly into the router, you’ll need a Sonos Bridge, which acts as the Playbar’s entry point into your home wireless network.

You’ll also need to install the Sonos app onto a smartphone or tablet to pass through the set-up wizard. From June 8th there’ll be a new available, and the Playbar supports it. You can find out how to upgrade to the Sonos S2 system here.

Using the app allows you to replace your TV’s remote. The Playbar features an IR blaster, letting it transmit the same signals as a remote control, and part of the set-up is telling the Playbar exactly what sort of remote it needs to emulate. You can skip this part if you prefer, though. 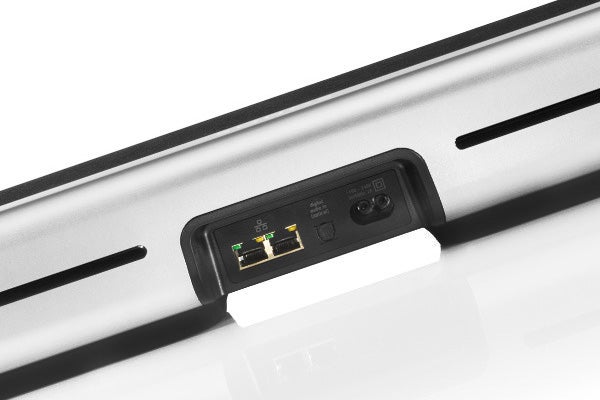 This functionality could arguably have been implemented more easily with an Arc-enabled HDMI port, which can pass on remote-style commands, though at the time of the Playbar’s release, not every TV had an HDMI arc port.

Once set-up, your TV and the Sonos Playbar can be fully controlled using an iOS or Android device. The Sonos S1 app works well, and intuitively integrates wireless music services like Spotify and Napster, and TV audio. And thanks to the closed nature of the Sonos system, you can’t use apps other than Sonos.

Sonos normally keeps fairly quiet about the exact nature of its driver arrays, but we know that inside the Sonos Playbar are six mid-range drivers and three tweeters.

It’s a common-sense setup for what is effectively a 3.0 soundbar. The left, right and centre channels get two mid-range drivers and a tweeter, while the left/right tweeters are mounted on the edge of the bar at roughly 45-degree angles to fire audio as wide as possible. 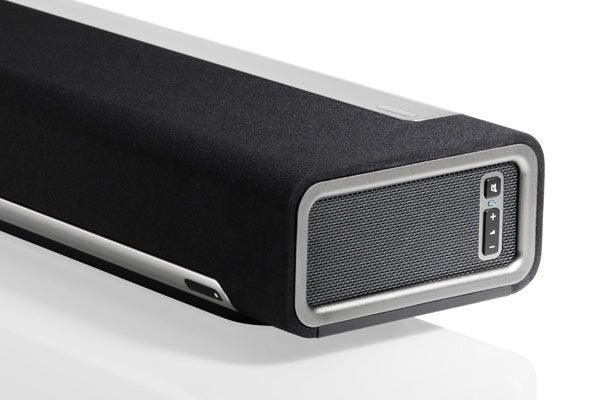 This driver setup works extremely well, producing a wide, detailed and grand-sounding soundstage. The Sonos Playbar creates sounds genuinely larger than its size – however we did find that the best results came from positioning the soundbar “upright” rather than on its back, as Sonos suggests.

The Playbar’s sound is exceedingly crisp and detailed, a tonality that’s common in aluminium-bodied speakers. There’s real finesse in its delivery of music and dialogue alike. 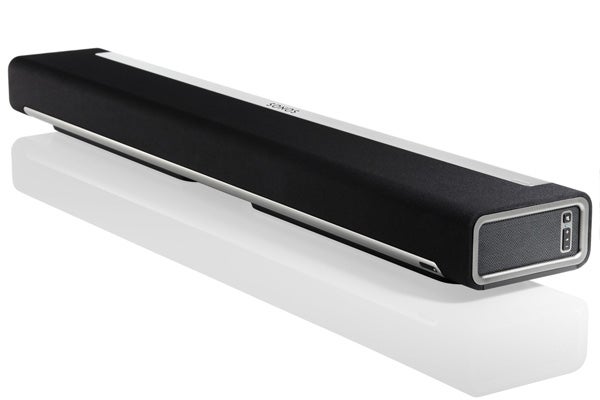 Given the speakers it has at its disposal, bass performance is pretty impressive too. For relatively small drivers, the Sonos Playbar can pump-out mid-bass tones with surprising authority. However, it fails to deliver low bass and sub-bass sound. The drop-off is pronounced, and means that the Playbar alone isn’t quite enough to do justice to an explosion-packed action movie. A sub-less system also lacks a little warmth compared with a more traditional set-up.

That’s where the Sonos Sub comes in. The Playbar is happy enough on its own, but you can add the Sonos subwoofer as part of a 3.1 setup. Feeling especially flush? You can also add a pair of Play:3 speakers for a full 5.1 surround sound system.

Other Sonos kit and other non-Sonos speakers cannot be used as part of the Playbar surround system. It’s also worth noting that only external sources will offer surround – all of the content within the Sonos library of streaming services is stereo.

Should you buy the Sonos Playbar?

It’s hard to deny that the Sonos Playbar is anything but a success. It looks good, works a treat and has the sound delivery to act as the main sound source in your living room. It also has the punch of some soundbar systems that include a small subwoofer.

It’s now much cheaper than it was even a few years ago, and with the release of the Arc it’s no longer the premium home cinema system in Sonos’ range of speakers. If you’re interested in playing Atmos through your system, the Arc is better suited to this (as long as you have a TV that supports the eARC connection). If you’re content to play standard stereo/surround content, the Playbar suffices, though bear in mind that it’s not built for current, modern TVs.