What is the Sonos Playbase?

On paper, the Sonos Playbase seems like any other soundbase. Like the Sonos Playbar from 2013, it takes over audio duties from your flat screen TV, which usually needs a bit of help – and it saves space doing so by letting your TV sit on it. But as every Sonos product works with one another, you can build as big a system as your house (or wallet) allows, so it’s much more than “just a soundbase”.

For example, add a pair of Sonos Play:1 speakers and a Sonos sub and it becomes a formidable surround sound system. Spread those same speakers around your home and the Playbase becomes part of a multi-room audio setup. Sonos supports every major music streaming service and the Sonos app is easily the slickest, smoothest and most user-friendly piece of software I’ve ever seen with an audio product.

While the £699/$699 price tag instantly rules this out as an impulse buy, it’s a very clever and convenient alternative if you’d prefer a soundbase to a soundbar.

Soundbases are essentially soundbars, only flatter and deeper, and designed to bear the weight of your TV. The Playbase is 2.3-inches thick and 14-inches deep, and it can hold TVs up to 35 kilos (or 75 pounds).

I like the look of the Playbase. It’s elegant enough to fit into those glass-and-metal show houses you see on Grand Designs, yet understated enough to go unnoticed in regular homes.

Sonos products have always been smart and minimalist, but the company has gone a little further with a design that’s supposed to look like it was cut from a slab of granite. But it’s not stone; it has a body of glass-filled polycarbonate and is available in black or white.

The black version is more convincingly stone-like, but I think the white one (tested here) looks pretty smart too. Maybe it’s just me – I had one house guest confuse the white Playbase for piece of Ikea furniture. 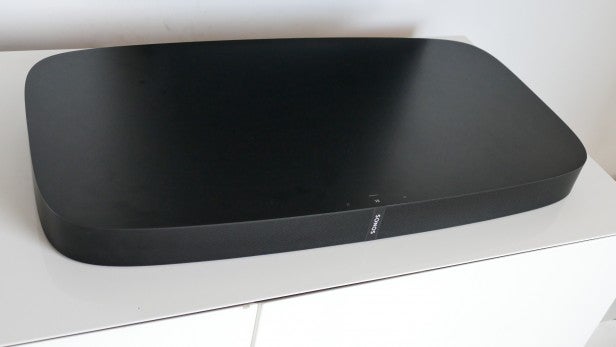 On the inside, there are six mid-range drivers, three tweeters and one subwoofer, with 10 Class D digital amplifiers to power them all. As for connections, you get an Ethernet port and an optical input.

There’s no HDMI input or passthrough. Sonos wants to keep things simple, and as the Playbase’s main function is to support your TV’s sound, the idea is that you plug your Sky Q or Nintendo Switch into your TV, and then have a single cable out to the Playbase.

The tech journalist in me always wants more plugs and sockets, especially considering the asking price, but I must admit Sonos’ serving suggestion is ideal for my living room setup. I have two HDMI sources already connected to the TV, and plugging in one optical cable took less than 10 seconds.

There’s just one physical switch, the network pairing button on the left of the Playbase. The front edge has three touch-sensitive keys for play/pause and volume. They all respond instantly, which is great. You’d be surprised at how many such products come with badly implemented touch controls. 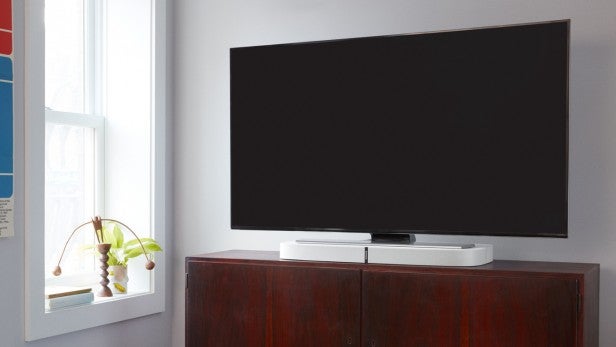 Sonos Playbase – In use

It’s just as well those touch buttons work well, because there’s no remote. Ordinarily this would qualify any product for a sigh and an eye-roll, but Sonos’ software is so good that I never felt the lack of a remote was a hindrance.

You control everything through the Sonos app. This has long been my favourite A/V product app and it remains the gold standard for products trying to integrate third party services.

It actually works, for starters. That might seem obvious but so many app-only products fall at the first hurdle. Sonos charges ahead of the competition in this regard. The app not only loads as quickly as I can reach for the TV remote – it loads knowing which product I want and the room I’ve assigned it to.

It’s a far cry from those that make you wait while trying (often failing) to detect your product on the same Wi-Fi network. Once you’ve got it going, it’s fast and smooth, with menus that load right away. You never get the sense that there’s a process at work – it just performs. 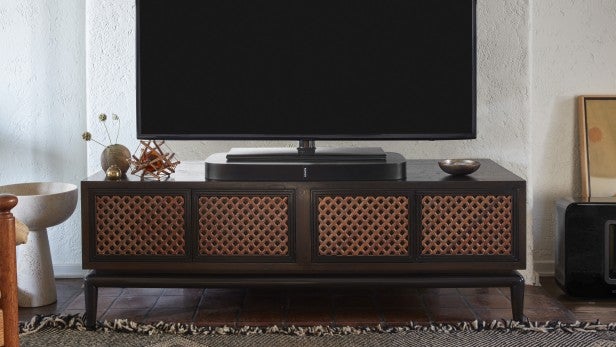 Just to mess with the Playbase, I downloaded the iPhone app right after I set the system up on Android. Did using two apps confuse the Playbase? Not a chance. The iOS app took less than 10 seconds to work out what was going on, recognising that this is a device I had just set up. It didn’t ask me to register again.

It gets even better when you consider the integrated services. Sonos says there are over 30. I didn’t count, but I did spot all the key streaming apps that immediately spring to mind: Spotify, Tidal, Apple Music, Google Play Music, Amazon Music, Deezer, and even TuneIn Radio. These are seamlessly integrated: once you put in your login details you can control all of them from within the Sonos app, all as quickly and smoothly as if I had all the files stored locally on my smartphone. This makes me happy.

Sonos has even promised Amazon Alexa compatibility later this year. You’ll be able to control the Playbase by shouting at your Amazon Echo or Amazon Echo Dot. I can’t wait to try it out; once it’s available I’ll be back to update this review.

Enough about what it does; how does it sound? Very good, I’m pleased to say.

The first thing that strikes you is how big the soundstage is – it’s wide and tall enough that it’s hard to believe there aren’t other speakers hidden in the room. I don’t say that lightly, as my default living room system is a pair of good bookshelf speakers.

The Playbase doesn’t give you the sort of stereo imaging you get from speakers, but it did a fine job locating the effects on my Blu-ray of Star Wars: The Force Awakens. The opening attack scene in the village has plenty of laser bolts zipping everywhere – the Playbase’s effects placement is accurate enough that I could close my eyes and tell what was going on.

As for tonal balance, it’s a crowd pleaser. What you get is an engaging, entertaining sound that doesn’t favour any part of the frequency range. There are EQ settings for the bassheads who want to crank it up, but the default settings feel very natural.

The midrange is smooth and direct; voices have a convincing weight to them, and they don’t harden up when you push the Playbase to neighbour-bothering volumes.

Sonos says the Playbase and the Playbar should sound about the same, but I’d disagree. I reckon the Playbar offers more solid bass while the Playbase has greater bass extension – less of it, but deeper and better controlled.

I cycled through Massive Attack (my bassy test fave), Lorde, the Red Hot Chili Peppers and Daft Punk – the Playbase easily makes the distinction between different bass lines, knowing when to rein it back or let loose. It’s not a level of subtlety I was expecting. 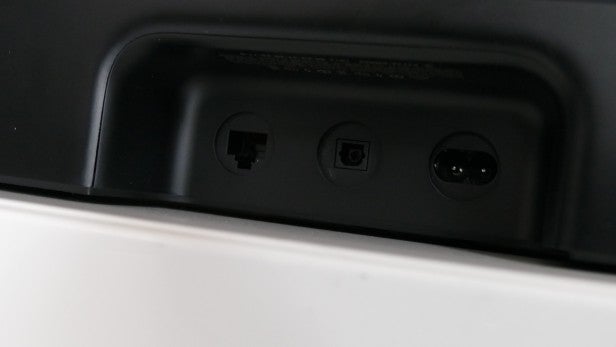 If I had to nitpick, I’d say the sound could punch a little harder. As it is, the Playbase is tuned to be more easygoing and polite. I’ve experienced more attack from music-oriented soundbars, such as the Dali Kubik One. Then again, that doesn’t have the Sonos Playbase’s streaming smarts.

I should point out the TruePlay feature, a setting in the iPhone version of the Sonos app – bad news for Android users. This is a room-based calibrator; the Playbase pumps out a series of test tones, which are received by your iPhone’s microphone, and some clever software figures out how to optimise the sound. The changes are subtle, but effective. In my living room, TruePlay dialled down the treble a little but pushed the midrange slightly forward. The overall effect: slightly clearer, more direct vocals.

That’s just the Playbase on its own, but what if you upgrade? I didn’t have Play:1 speakers or the Sonos Sub to play with at home, but I did meet up with Sonos for a demonstration, and I can see the benefits of adding extra units.

The Sonos Sub does a great job of shifting a lot more air, so that’s good if you want to rattle the room. The Sonos Play:1 speakers are effective at giving you a greater impression of effects placement and directionality, which you wouldn’t get with just the Playbase on its own.

My demo clip of the big attack scene in The Revenant convinced me there was an arrow pinging past my right ear. All of this would be pointless if the components sounded disparate, but they don’t – the Playbase integrates nicely with the Sub and the Play:1, so don’t you worry about upgrading. 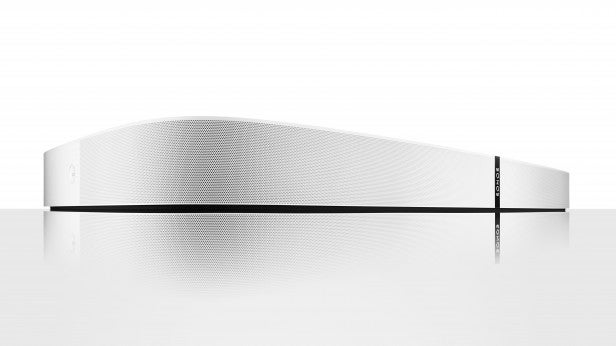 Should I buy the Sonos Playbase?

There’s no getting away from the £699 price tag. That’s a lot of money. You could get a better-sounding traditional hi-fi system, or even a similar-sounding soundbar, for less – and you’d find more connections too. But consider the Sonos Playbase’s unique elements and the price begins to make sense.

This is not just a booster seat for your TV, it’s also a formidable streaming system in its own right, with excellent sound quality and a huge list of compatible services. This thing operates on the slickest software available on any AV product I’ve tested, which make setup and daily use a pleasure. Then there’s the potential for easy system expansion, in case you want to build a surround or multi-room system – not many soundbases let you do that.

No doubt the Sonos Playbase is a luxury, but it’s one that fights hard to justify its asking price. If you’re tight on space, and you’re looking for one very pretty gadget to be your main sound source, I can’t think of many better options.

A convincing argument for throwing out your stereo.