Since music-streaming service Spotify launched a decade ago, it’s been joined by rivals from Google, Amazon, Apple, Deezer and Tidal. However, the original still leads the way when it comes to supplying music on demand.

At last count the service had more than 35 million songs available, and while you can enjoy them for free with its ad-supported version, it restricts you to playing in Shuffle mode only (save for a few specific playlists) and allows you to skip only six tracks per hour of listening.

If you want to access everything Spotify has to offer then it will cost you £10 a month, and it’s really that paid-for Premium service we’re reviewing here.

Spotify usability and design – Very consistent no matter which device

There are Spotify apps available for various platforms, including Android and iOS smartphones and tablets, PCs, Macs and games consoles, plus it also works in a web browser. No matter how you access it, it feels fairly familiar.

A search bar allows you to scan Spotify’s library for songs, artists, albums and, if you know the right tricks, even record labels and release dates. Find the one you want and it will play with just a click. As long as you have a consistent 3G connection or faster, there’s very rarely any hint of loading or buffering.

You can save stuff you like to your library, although if you listen to something regularly then you might also want to store it offline (signified by a green tick). This means you don’t need an active internet connection to listen to it and you won’t use up any data when you do so. However, you will need to connect at least once every 30 days to prove you’re still an active subscriber. 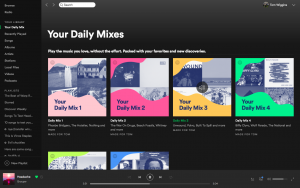 Annoyingly, the search function stops working fully when you’re offline, only returning limited results, so you’ll have to manually seek out much of the stuff you’ve cached when you’re not connected to the internet. It’s a minor irritation, but if you’re using up your full quota of 3333 offline tracks (per device, up to a maximum of three) then it isn’t ideal.

As you’d expect, you can browse your library by artist, album or song, plus there’s a menu displaying what you’ve most recently played. When it comes to playlists, however, things get a bit more chaotic.

By default, playlists are simply listed in the order you made them, with the most recent at the top. This can become a little unwieldy as your collection grows, particularly on the desktop. This is because the Playlists menu also includes those others’ playlists you follow, as well as those you’ve put together yourself. 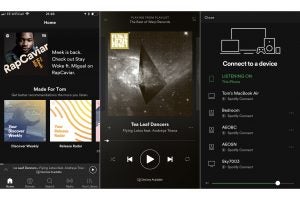 It is possible to drag and drop to rearrange the order of playlists, or sort them into a selection of folders, but that feels a bit Windows 95. It’s often quicker just to use search every time.

Spotify does have a neat feature that allows you to make collaborative playlists, which is ideal for parties, offices and road trips, but creating and sharing one with the other contributors isn’t the most intuitive process. You also run the risk of them deleting all the solid gold bangers you added, so be careful to whom you allow access.

With more than 35 million songs available, Spotify’s library caters for all but the most obscure tastes.

It’s rare that you’ll draw a blank when searching for something specific, and those that are missing tend to either be absent from streaming services altogether, or exclusive to a particular service that the artist in question has got their own cash invested in (hello, Jay Z and Tidal).

You can also use Spotify to play your library of locally stored MP3s, but they’re just sorted into one long list that you can only order by either song title or artist, which makes them a real pain to browse. Plus, if you don’t have all the metadata in good shape, things end up in a real jumble. It’s almost as if Spotify would rather you stream its tracks instead…

But how does it sound? As a Premium subscriber, on desktop you can choose to turn on ‘High quality streaming’, which ups the bit-rate to 320kbps, but the mobile app offers more choice. 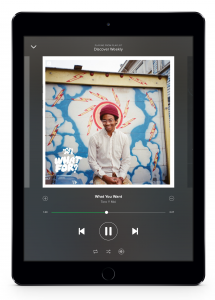 There are separate settings for streaming and downloads, so you can save your data allowance by opting for a lower bit-rate when streaming, but ramp it up to the full 320kbps ‘Extreme’ setting for stuff you’ve cached offline. There’s also an ‘Automatic’ option for streaming, which changes the bit-rate depending on the strength of your phone signal.

Audiophiles will inevitably turn their noses up because it isn’t hi-res, but for most people the convenience makes up for any perceived lack of quality. For day-to-day listening, particularly when out and about, the sound quality is more than good enough – although play a song side-by-side with Apple Music, and Spotify’s performance does sound slightly flatter, even when downloaded in ‘Extreme’ quality.

Is it enough of a difference to make you jump ship if you’re a dedicated Spotify user? Probably not, but if you’re yet to commit to either, it’s worth bearing in mind. 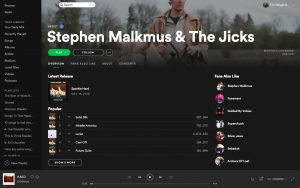 When presented with that many songs it can be tricky to decide on what you want to listen to, but with Spotify you don’t necessarily have to.

The service has a huge range of curated playlists, sorted by genre, mood, activity and popularity – but if they all feel a bit generic, Spotify’s personalised curation is second to none.

Its Daily Mixes are put together specifically for you by the magic pixies at Spotify HQ (okay, they’re called algorithms) and offer six genre-specific playlists that will continue running for as long as you let them. You can tell it if there’s something included that you don’t want to hear again, or add anything you particularly like to your library. 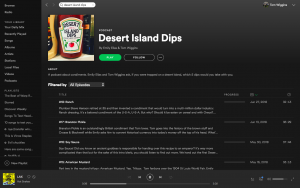 This isn’t a particularly new idea, but Spotify does it with such unerring accuracy and success that it really stands out. As long as you have a vague idea of the sort of music you’re in the mood for, you can count on one of your Daily Mix playlists to deliver it consistently.

It even knows the differences between sub-genres, so will put The Pharcyde and Pete Rock in a different hip-hop-themed Daily Mix to Brockhampton and Pusha T. Pretty impressive.

There’s also Release Radar, which collects together new songs that Spotify’s algorithm thinks you might like, but its most impressive taste profiling is found in its Discover Weekly playlists. These are specific to each user and differ from Daily Mixes in that they try harder to introduce you to bands you’ve never listened to before.

Each week you’ll get a new selection of 30 songs, and while by definition you won’t like every single one, it’s astonishing how many new bands I’ve explored further and sometimes even been to see live directly off the back of hearing them on my Discover Weekly playlist. It genuinely adds value to the Premium membership (and, potentially, puts money in the pockets of bands who have suffered from the death of the CD). 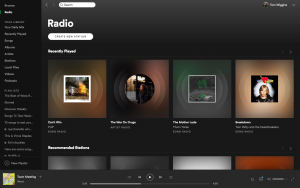 Spotify connectivity – Can wring a tune from many sources

Just because Spotify’s app is only available on phones, tablets and computers, doesn’t mean you can’t listen to it on that new Sonos system or Amazon Echo speaker you’ve just bought.

If you have a speaker that supports Spotify Connect (and both the aforementioned do), and it’s connected to the same Wi-Fi network as whatever device you’re using to run the app, you can simply select the speaker from the Devices menu and cast the audio to it instead.

It isn’t quite multiroom, because you can only play through one at a time, but switching between speakers is seamless. As such, your music can follow you from speaker to speaker as you move through the house, or jump from your headphones to your laptop when you get home.

We’ve encountered occasional hiccups when using a Sonos Play:3 with Spotify Connect, but by and large it works flawlessly, and switching between devices is much quicker and more streamlined than using normal Bluetooth.

If you don’t have any devices that support Spotify Connect, you can also use Apple’s AirPlay and Google’s Chromecast. 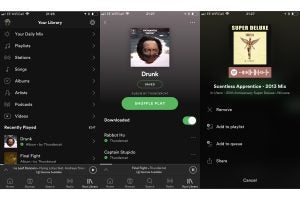 Music might be Spotify’s bread and butter, but it also has a neat side-line in podcasts and video. But will you use either?

If you’re already subscribed to a load of podcasts elsewhere, it will be a bit of a hassle to start all over again in a different app. Nevertheless, plenty of your favourites are there: Adam Buxton, Athletico Mince (worth it for Bob’s Peter Beardsley impressions alone) and Hip Hop Saved My Life, to name just three.

In the videos section you’ll find music videos that you’ve already seen on YouTube, and a selection of live sessions and short documentary-style videos. There’s a particularly nice animated series called Drawn & Recorded, which includes episodes on how Nirvana’s ‘Smells Like Teen Spirit’ got its name and why the Wu-Tang Clan’s ‘ODB’ was a modern-day hero – but there aren’t very many and they’re quite hidden away. Considering how high the production values are, it feels like a bit of a missed opportunity.

You’ll also get song lyrics and trivia for certain songs from Genius, plus a Concerts section that will recommend nearby gigs based on your listening habits. None of these will determine whether or not you sign up to the service, but they’re certainly nice to have. 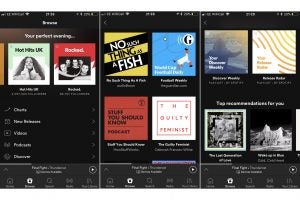 You should buy a Spotify subscription if…

Spotify has become synonymous with music streaming, so if you’re looking for a service to subscribe to, it seems like the obvious choice. Its apps are widely available and well designed; the catalogue has no glaring omissions; and its music discovery features are streets ahead of the competition.

You shouldn’t buy a Spotify subscription if…

Apple Music might sound slightly better, but it’s weaker in other areas that are more frustrating in everyday use. TIDAL and Amazon Music HD offer hi-res audio playback if that’s of more interest, and for audiophiles it likely will be.