The HTC One M8 has now been superseded by the HTC One M9, but is still available to buy.

The HTC One M8 was released in March 2014 as HTC’s flagship model, replacing the HTC One. The One M8 has a lot to live up to, taking on the mantle from HTC’s best-selling phone ever, and the 2013 winner of TrustedReviews’ Phone of the Year.

It is now available for £330 SIM-free, significantly reduced from its £530 price at launch, since the launch of the HTC One M9. Although it hasn’t quite had the impact HTC would have liked, the HTC One M8 was undoubtedly one of the best handsets of 2014.

There are some great flagship phones competing for your hard-earned money, with stiff competition coming from the iPhone 6, LG G3, Samsung Galaxy S5 and the cheaper Google Nexus 5. There’s very little to choose between any of these phones, though the HTC One M8 is superior in a number of departments compared with its main Android rival, the Galaxy S5.

The best bits of the HTC One M8 are its design and battery life – it looks and feels good and can last two days on a single charge if you’re careful. The downside is a gimmicky camera that doesn’t come close to its competitors. Still for £330 it’s a great handset and is well worth considering over its more expensive successor.

The HTC One M8 is a beautifully-designed phone, outshining the Galaxy S5 and even better- looking than the attractive LG G3. HTC has clearly made a point of focusing on the look and quality of the materials it has used, and has made them a design priority.

Just like the excellent HTC One, the HTC One M8 is a mostly metal phone. HTC has opted in this instance though, to put more of that sleek metal on display. Using the company’s own description, where last year’s model has a back that’s about 70 per cent metal, the HTC One M8’s rear is around 90 per cent metal.

The two-tone plastic has been ditched in favour of a one-piece metal back that curves around to meet the Gorilla Glass-wielding screen. A new curvier design gives the HTC One M8 a smoother feel than its predecessor, while preserving the cool and solid feel you get from the phones aluminium body. 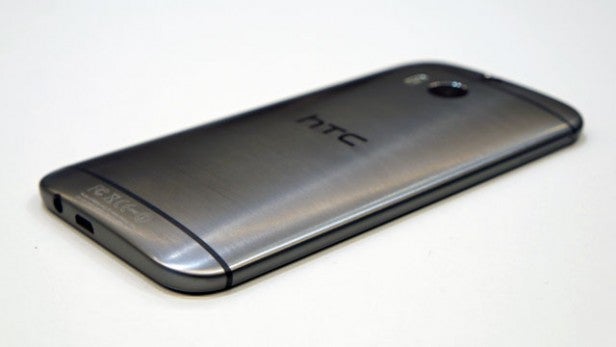 It is a bit bigger than last year’s phone, though. The HTC One M8 is a fair amount taller which means it feels like a larger phone in-hand. However, it’s just a couple of millimeters wider and width is the only serious practical concern with a phone of this class. HTC has slimmed down the screen bezel to minimise the increase in width.

If you’re not used to a 4.7-inch to 5-inch screen phone, try to check out the phone first-hand. But if you’re looking at this phone in contention with the Galaxy S5 and Xperia Z2, size is not an issue. And neither is weight, despite the phone being a little heavier than its rival.

In larger phones like this you often see the power button shifted to the side, from the usual spot up top. Here it sticks on the top edge, but the new Motion Launch feature lets you switch the phone on from standby with just two quick taps on the screen. This means that stretching for the power button is less of an issue.

Alternatively, you can go straight to the main home screen or the BlinkFeed window by flicking from the left or right of the screen (when it’s off). This uses a special motion sensor chip in the phone, which lets it constantly monitor these sensors without eating up much battery. 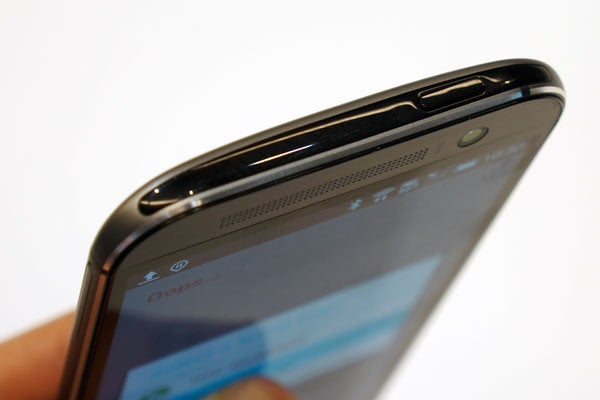 In exact measurements the HTC One M8 is 9.4mm thick, 160g, 71mm wide and 146mm tall. None of these are notable in a positive sense, but HTC’s non spec-centric design approach is healthy. It has tried to make a phone that looks and feels good, not one out to become the “thinnest” or “lightest”. It can easily be argued that it is the prettiest, though.

One technical issue with making any ‘all-metal’ mobile device is that wireless antennas struggle to transmit through it. That’s why the backplate is ‘only’ 90 per cent metal. There are two little plastic strips that sit across the top and bottom, and this is where the antennas live. These strips were used in the HTC One too, and have become part of the series’s design language. Clever design like this makes functional choices look like pure style ones. 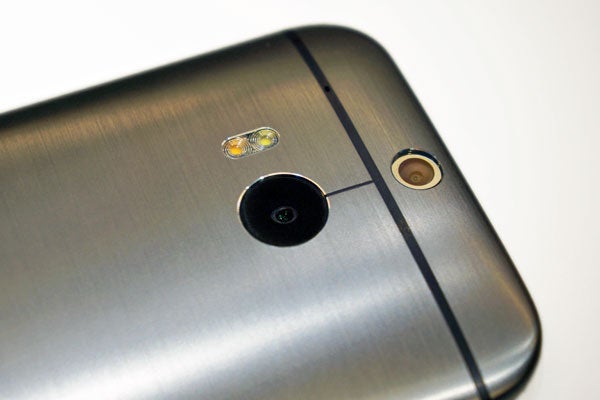 Is this a better looking, better designed phone than the HTC One, though? Not really. You can’t beat the borderless front of the original, which helped to emphasise that mobile’s two-tone style. However, it’s not any worse – the HTC One M8 is a lot nicer to look at than the HTC One Max, for example, and the vast majority of phones made. Ever.

It comes in three colours. The lead one, “gunmetal grey” is seen here. HTC also makes one that looks more like the first silvery HTC One, with a shade called “arctic silver”, and a light gold one dubbed “amber gold”. The latter is nowhere near as bright and vivid as the gold version of the Galaxy S5.

They have slightly different metal treatments. The grey model uses a brushed ‘hairline technique’ look, while the others stick with anodised style of the former HTC One model. 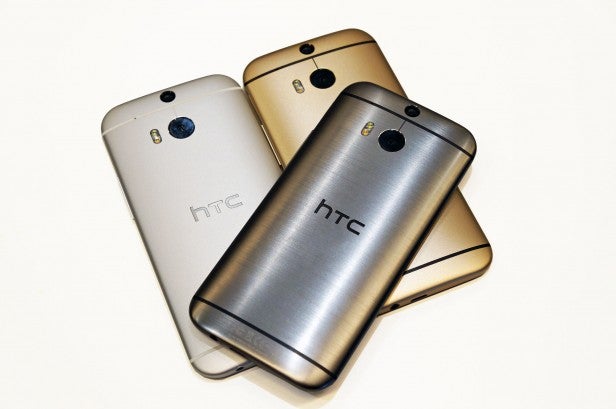 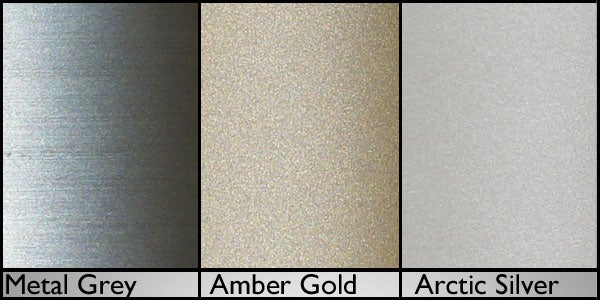 The One M8 also solves one of the key perceived issues with the first HTC One – it has a microSD memory card slot. It sits on the right edge of the phone, using a pop-out tray. This ensures that the 16GB version of the phone will be the main one sold in the UK, as buying a memory card will always be cheaper than upgrading to a pricier version. HTC is going to make a 32GB edition too, but it won’t be available everywhere here.

HTC’s move from a micro SIM to a nano SIM is more controversial. Just a few phones use this tiny SIM – most notably the iPhone 5S/5 and Motorola Moto X – and as the tray clearly makes room for a dual-SIM model, a size constraint clearly wasn’t the main issue. Still, most networks will happily send you out a nano SIM replacement for free. You can also clip down your current SIM manually. But we don’t recommend it.

The most obvious feature that you miss out on as a result of the phone’s focus on looks is water resistance. The Samsung Galaxy S5 and Sony Xperia Z2 are both certified for water and dust resistance, using a slightly annoying rubbery flap to cover the microUSB charge socket. HTC’s One M8 is not waterproof – its microUSB slot is exposed. Reports online suggest the phone is actually fairly water-resistant, but the lack of any rating means you won’t be covered for any water damage. 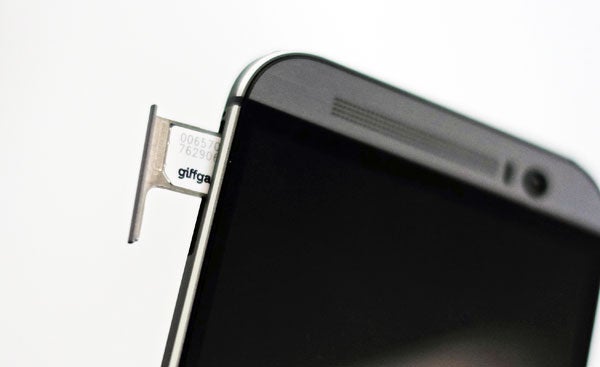 The design isn’t all about looks. The other hardware stand-outs include a dual-lens camera system and stereo BoomSound speakers on the front of the HTC One M8. These speakers are what make the phone so tall – but provide far better audio than the usual naff little mono speakers on the back of phones.

Your initial assumption might be that it’s all about volume, but what the BoomSound speakers really provide that’s worth having is greater authority, a much richer tone and more power. To say the HTC One M8 has real bass would be overstating it, but it does have the mid-range body that you don’t get elsewhere. Extra power like this is as good as (if not better than) extra volume when the phone is competing with your oven’s extractor fan as you listen to the radio while making a bolognese (insert your own situational anecdote here). 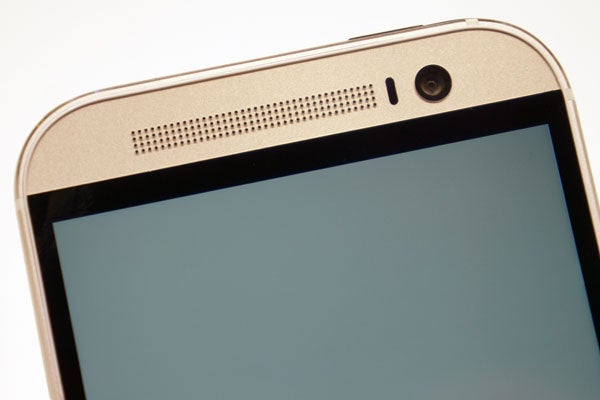 This is one area HTC has substantially improved-upon since the HTC One. The sound is fuller, and a bit louder. HTC told us it has redesigned the tiny little piezo drivers (they may be BoomSound but they’re still small) and the speaker enclosures, but it’s likely to be down as much to a reworking of the DSP managing the treble-mid-bass output.

Back when the HTC One came out, HTC was still working with Beats audio for its DSP, but now it’s all HTC-branded. It’s no great loss as HTC says it made most of the software anyway. It wouldn’t be the first time Beats has been accused of being all about the brand…

The one weakness of the BoomSound speakers shows its hand when you’re playing games. As your thumbs move directly over the drivers, your digits’ movements do slightly alter the tonality of the sound. It’s not something everyone will notice and doesn’t affect movie watching in the same way. There is no rear case rattling caused by listening at top volume, though, which would have been much more irritating.