There are improvements across the board. While the form factor has remained mostly the same (say for a couple of tweaks to the corners and chamfered edges), everything else is bang up to date with the latest iPhone 6S and iPhone 6S Plus.

First, there’s the latest Apple A9 processor that you’ll find in both the flagship devices, which should improve performance significantly. There’s faster 4G and better 802.11ac Wi-Fi, too. The camera has had a huge upgrade, bringing it in line with the latest devices. This is huge news for anyone remotely interested in taking photos on their iPhone and is probably the most attractive thing about the iPhone SE.

You’ll also get Apple Pay, 4K video recording, better slow-motion and Live Photos thrown in. Prices start from £359 upfront, and we’ll update our other iPhone SE coverage when networks give us contract pricing.

If you’re in the market for a new phone, the iPhone SE should be on your shortlist, especially if you need something a little smaller than the gigantic iPhone 6S and 6S Plus.

Living with the iPhone 5S

By smartphone standards the iPhone 5S is outright ancient. First released in 2013, with the rumoured approach of Apple’s fabled iPhone 6S on the horizon, the iPhone 5S is close to becoming two phone generations old.

This means compared to more modern handsets the iPhone 5S is no longer a powerhouse handset. Making up for this, the upfront cost of the iPhone 5S has plummeted.

Now many carriers, including Vodafone UK, are offering the iPhone 5S with no upfront cost on a variety of affordable contracts.

The price, combined with its smaller 4.7in screen and form factor mean the iPhone 5S remains, on paper, a fairly compelling choice for Apple fans on a budget and has stood the test of time surprisingly well.

What has surprised me most about the iPhone 5S is that I have not missed 5-inch phones as much as I thought I would. I sometimes struggle juggling bigger phones while on a train or bus so it’s been a bit of a relief stepping down in screen size. That changed since I lived with the 5.5-inch LG G3. That phone looks like a tablet compared to the iPhone 5S but manages to remain easy to use because of clever ergonomic design. Other competitors like the Samsung Galaxy S5 and HTC One M8 aren’t quite as slick to use.

There’s is not much to say about the iPhone 5S’s performance here other than that it’s blisteringly fast and very reliable. I’ve not experienced any issues with apps misbehaving other than the Google Maps hanging occasionally. It’s annoying but may be as much down to the app as to the phone.

Apple’s iOS has its limitations, you can’t customise to anywhere near the levels of an Android phone, but the fact that it just keeps working well is a godsend to those too busy to learn every little foible of their phone. I’ve not experienced the slow-down effects that tend to occur on Androids after lots of apps and updates have been installed – the iPhone 5S is rock solid.

iOS 7 is a wonderfully simple operating system and while some don’t like the new design, I’ve been delighted by it. The ‘Today’ notification isn’t something I’ve taken to much, but the multitasking menu and the Control Centre are great. In fact the lack of these features is one of the reasons I picked Android over iOS in the past. The Control Centre is still missing a quick access button to the full settings menu, which is particularly annoying when wanting to switch or connect to Wi-Fi networks. The newer iOS 8 is even better and the iPhone 5S runs perfectly with it on too.

It’s the Apple app store that makes iOS a great platform. As a mobile gamer the depth and breadth of titles is fantastic – Limbo, for example is a great little game that you can’t get anywhere else. Generally the apps are still of higher quality and depth than you can get anywhere else. 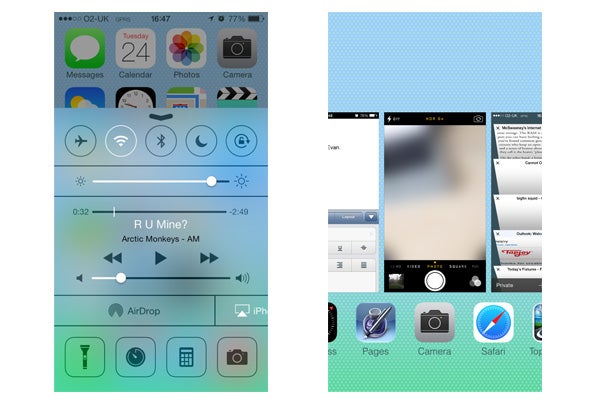 Cameras have become so important on mobiles that there are now some, like the Nokia Lumia 1020 and Samsung Galaxy Zoom, which are more camera than phone. I’ve found that the iPhone 5S’s camera to be solid, but not as exceptional as some others. It is perfectly suited for snapping and reacts quickly, which is what I want from a phone camera, but there’s not as much detail as you can get from the Galaxy S5 or LG G3. 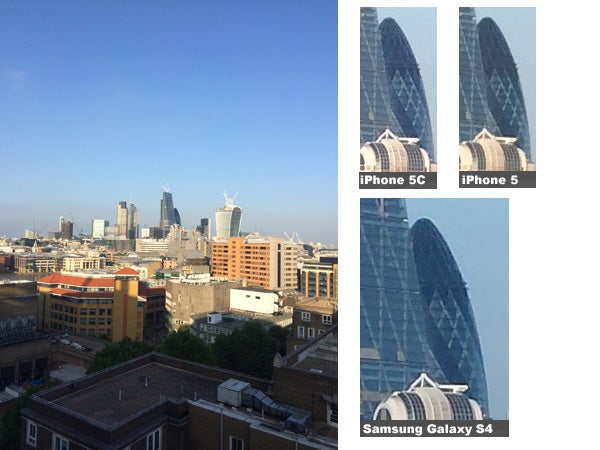 On the flip side the 5S’s camera works well in lower-lit conditions. The multi-tonal flash provides some far softer and more realistically lit shots in pubs and restaurants when compared to the harsh white light of most LED or Xenon flashes. The 120fps slow motion video is also great. I wasn’t that fussed when I first used it but it quickly makes videos looks more polished and special. Fantastic slow shots of my nephews and nieces jumping on a trampoline made me view it in a new light. The front camera also works well for video-chat as long as there’s decent ambient light.

The iPhone 5S lacks a microSD card slot for memory expansion, but you can still get it in 16/32GB versions, Apple has discontinued the 64GB one. The catch is the extra storage is pricey – too pricey – each increment costs an extra £40 on top of the £459 base price. It all depends on your storage needs, but if you don’t carry a load of movies or music with you 16GB (of which 13.6GB is usable) should be adequate, but for many the 32GB model will be optimal and I haven’t managed to fill 32GB yet. At this price, though, the iPhone 5S is for big Apple fans only. The iPhone 6 is much better and you can now get much higher spec phones, like the Galaxy Note 4, for the same price.

One of the most talked about features of the iPhone 5S, and my personal favourite, is Touch ID. This is a fingerprint scanner located in the home button of the phone that lets you unlock it without requiring a PIN or password. It works brilliantly and I already find it irritating to use any phone with a PIN or gesture lock now. It may be a luxury, but I’m in no doubt that this feature, or one very like it, will be in every phone will have in a few years. It just makes using your phone on the move so much easier. 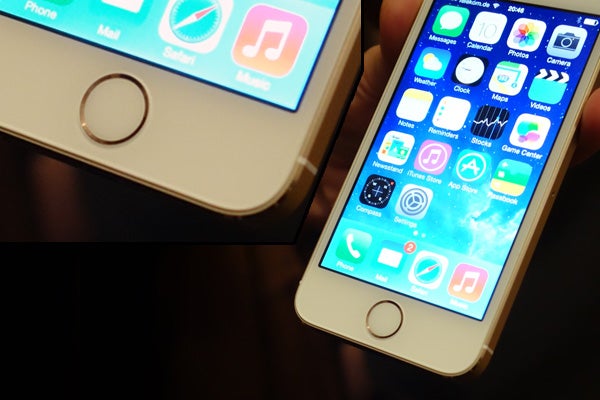 After a few weeks of use I had a bit of an issue with call quality – essentially my voice appeared distant to the person on the other end. The issue resolved itself after a short while but it was irritating while it lasted. It was not isolated either, a quick hunt on the internet showed a few users had the same problem. This is no longer a problem but we do sometimes find that call quality on the iPhone 5S is poor in low reception areas.

In terms of stamina the iPhone 5S is good but not outstanding. If used sparingly you will get two full days of use without a charge, but play games or use intensive apps for a few hours and you will need to recharge it overnight. The good thing about the battery is that it charges very quickly and is predictable – the 5S never suddenly drops a load of charge while it’s been sitting in my pocket.

On a day to day basis the iPhone 5S does everything I want it to do, and does the things I do most, better than any other phone I’ve used. It’s not gimmicky and other than the lack of widgets and customisations there’s not much I miss from using bigger Android phones. Apple has increased the screen size with the iPhone 6 and iPhone 6 Plus and thanks to a slick design it doesn’t make a big difference to the ergonomics. If you can afford it we’d opt for one of the newer versions but if you like your phones petite then the iPhone 5S is the best you can get.

If you want to find out more detail about every aspect of the iPhone 5S then continue to the next page to read the full review.