The HTC One M8 and original One were both great handsets, the latter a winner of the TrustedReviews’ Phone of the Year Award in 2013. The previous models in the One range were both arguably better than their Samsung and Apple counterparts at the time, but the competition has since caught up, and then some. The iPhone 6 and 6 Plus have sold a shedload and Samsung has put its flimsy-design woes to bed with the sturdier glass and metal Galaxy S6 and S6 Edge.

Does the HTC One M9 live up to its predecessors? HTC has opted against a complete design-overhaul, choosing evolution rather than revolution. Design-wise it has a lot in common with the One M8 and the screen is almost identical. The majority of the hardware developments come in the way of a new camera, processor and a bigger battery, while HTC’s version of Android has had a makeover with Sense 7.

This all results in a great phone with some clear areas of improvement. However, neither the new rear camera nor the battery life live up to their respective promises. And this isn’t wholly unexpected.

Nevertheless, this is still a solid flagship and it proves how far HTC has come in the last 2 or 3 years that we hold its products to such high standards and intense levels of scrutiny.

The HTC One M9 is to the One M8 what the iPhone 5S is to the iPhone 5. It shares the same basic design and screen as the HTC One M8 but some small adjustments set it apart from last year’s handset.

The most immediately noticeable of these tweaks is the new two-tone design. The trio of two-tone colour schemes available from launch will see a gold on silver handset joined by gold on gold and gun metal on grey offerings.

Where the back of the One M8 curved round to the screen, the M9 has a ridge connecting the front to the rear. The front of the handset looks as though it has been shoehorned into the back, the benefit being that HTC has been able to do away with the thin plastic edge between the screen and the frame. 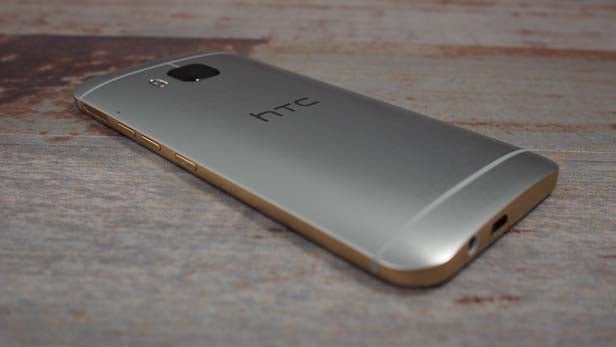 Do any of these changes make it better? Not in our opinion. The HTC One M8 has a classier air about it – it’s like comparing an understated Breitling to a gold Rolex. Both are well-made, but which one you’d grace on your wrist depends entirely on your taste.

This is a little harsh on the M9. It’s a good-looking phone, full of slick design touches and craftsmanship – a word HTC keeps using, and with good reason – but we like the M8 more.

The one upside to the ridge is it makes the M9 easier to grip – it’s less slippery than the M8 and other curved phones like the iPhone 6. It’s easier to hold one-handed, too, though it’s a smidgen less comfortable to hold. 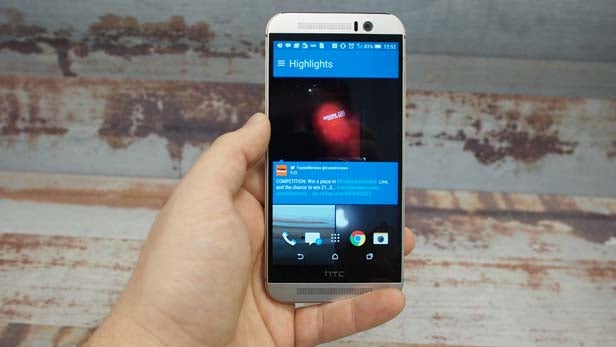 In every other respect the design of the HTC One M9 is a triumph. This isn’t a thin phone, but neither does it feel porky – it’s 0.2mm thicker than the M8, but almost 1mm narrower. The back curves into your hand and the metal feels solid – more so than the previous model even though it’s a few grams lighter at 157g. That weight gives it a good heft – the One M9 is well balanced, if a little bottom heavy. It feels like you’re holding a quality phone not a toddler’s toy. We like that.

One major new design improvement is the feel and location of the volume and power buttons. Previously plastic and along the top, the power button was a struggle to reach. It’s now in a far more sensible position, on the right hand edge, just below the volume buttons. It’s also been upgraded to metal and comes with a light etch so you can tell the difference between it and the volume buttons. These have had a tweak too. The buttons are a mite firmer and feel that bit better to press.

This is a tall and narrow phone so the new button position means it’s easy to reach with your thumb, if you’re using it right handed, or with your left hand’s index or middle finger. What’s still an issue is reaching the top of the screen.

It’s a real stretch to get your thumb to the browser back button or search box. Apple has gone some way to solving the issues that come with handling a large phone by dropping the screen with a double-tap on Touch ID. Samsung has as well, to a lesser extent, with one-handed mode. HTC hasn’t addressed the problem at all.  If you’ve got average or small hands, you will need to juggle the phone to reach certain areas of the screen when you’re using it one-handed. 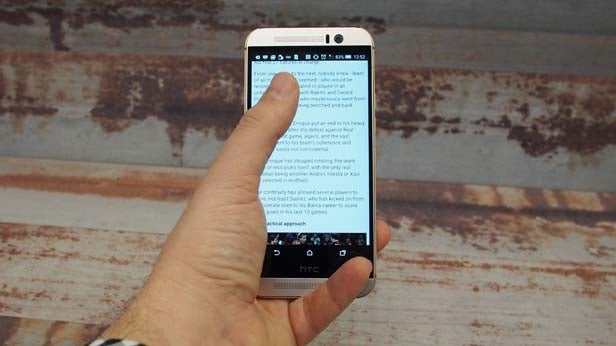 In most other respects the HTC One M9 is what you’d expect from a flagship phone. The microUSB and 3.5mm headphone jack are at the bottom, while there’s a pair of fine grilles at the front which house the new BoomSound speakers – we’ll cover those in more detail later.

Almost the whole top edge is covered with translucent black plastic. This is there to accommodate the infrared blaster that lets you use the M9 as a TV or home cinema remote. 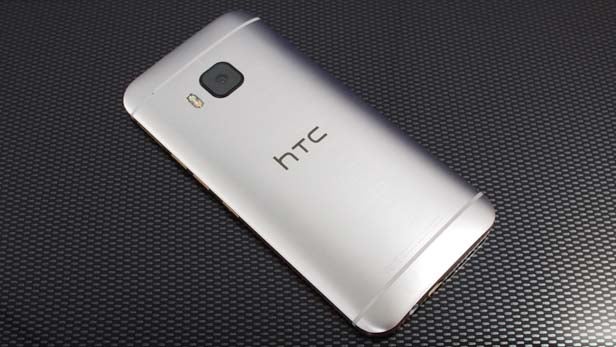 The only other difference between the One M9 and last year’s phone is on the back. Rather than a round camera that sits flush to the body the M9 has a square one that’s slightly raised. Rounded edges ensure the phone doesn’t snag when you’re sliding it into a tight pocket.

All in all the design changes HTC has made to the M9 are positive. The ergonomics have improved thanks to the new power button and narrower body, but some of the aesthetic alterations are less of a success. HTC could have left well enough alone, but there’s no denying that the HTC One M9 is dashingly handsome.

The M9 is available in three colours at launch: Gunmetal Grey, Gold on Silver, and Gold on Gold. Read on to find out about the HTC One M9’s screen.