It might not be a design classic like the iPhone 4 or iPad mini, but it nevertheless looks and feels great. Like the 5S before it the iPhone 6 manages to do everything with aplomb – it has no serious weaknesses.

When it was released in 2014 the iPhone 6 was one of the hottest smartphone on the market. Featuring a completely rethought design, Apple loaded the iPhone 6 with a wealth of custom software and hardware features.

The combination of hardware and software features made the iPhone 6 one of the most innovative and powerful smartphones ever seen. However, one year on Apple’s competitors have come out swinging releasing their own wave of top-end innovative handsets.

The iPhone 6 opts for soft curves and seamless joins between the screen and the back. It’s a very different look from the iPhone 5S, which has shiny machined edges. Barring some plastic detailing on the rear it’s all glass and metal, and looks great for it. 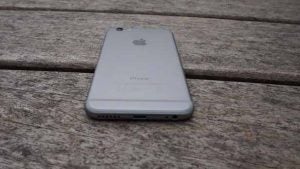 It’s not as striking as its predecessor. The angular design of the iPhone 5S made it stand out amore. It’s the same with the iPad mini and iPad Air, although they marry the diamond cut edges with rounded metal sides.

It may not be as instantly arresting, but the iPhone 6 looks like it’s been hewn from a single piece of metal and glass and fused seamlessly together. The effect is particularly strong in the space grey finish and with the screen turned off. It is a beautiful slab of black glass and anodised aluminium. We feel the design is safe rather than ground-breaking, though. The white bezel on the silver version ruins the seamless effect a little – we’d go for space grey every time. 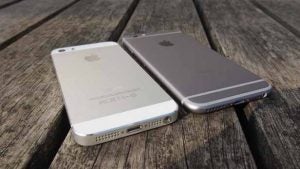 The iPhone 5S, left, next to the iPhone 6

As always with Apple’s phones the iPhone 6 has superb balance, it just feels right in your hand. The comfy edges are also a lot easier on the palm than the sharper ones on the iPhone 5S and the 6.9mm thickness makes it feel sleek yet strong.

Some owners are claiming that it may not be quite as robust as Apple hopes. Reports of the iPhone 6 bending in pockets have surfaced. We’ve had it in the front pocket of jeans and have not experienced any issues for the months we’ve been using it or the iPhone 6 Plus. We’re not talking super skinny jeans, but we’ve been cycling with it in tight pockets and there’s not been a bend in sight. In fact since the initial furore we’ve heard very little about it. We’ve hear similar reports surfacing about the Samsung Galaxy S6 but unless you intend to use your iPhone 6 as a see-saw we wouldn’t worry about it at all.

We do suggest you fork out for a case, though. Like all phones you run the risk of smashing the screen if you drop it and  iPhone 6 repairs don’t come cheap.

It’s big, but not too big
While the iPhone 6 is bigger, it doesn’t feel too big. Aside from being much thinner and lighter at just 129g it’s very similar in size to the original HTC One, one of our favourite phones of 2013. If you have small hands you might struggle to get to the top corners of the screen, but we’ve not experienced these problems. 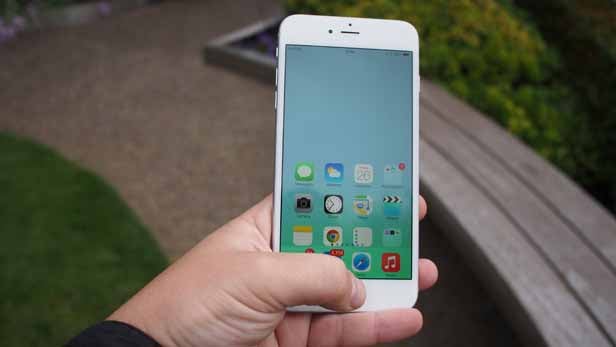 There is some help if you do find the screen of the iPhone 6 too big. Clunky one-handed use features are available on some Android phones, but they’ve never felt particularly intuitive. They often just shrink the whole screen diagonally down. Apple has come up with a typically elegant solution. Tap twice on the home button and the entire top of the screen jumps down bringing all the hard to reach areas into your thumbs range. It works on every app that works in portrait mode too, so you can easily get to the address bar or a browser without a problem.

Realising a power button at the top of the phone of this size doesn’t work Apple has moved it. The power button is at the right edge, above the nanoSIM tray. This makes it easy to access with your thumb, if you’re right -anded or with your index finger if you’re a lefty. It works a lot better than the top power button on the HTC One M8 which requires a little juggling to get to if you’re not ET.

In all other respects the layout of the iPhone 6 is the same as previous versions. The slightly recessed volume buttons sit on the left just under the mute toggle. The 3.5mm headphone jack resides at the bottom, with the lightning port and six handsome holes for the speaker. 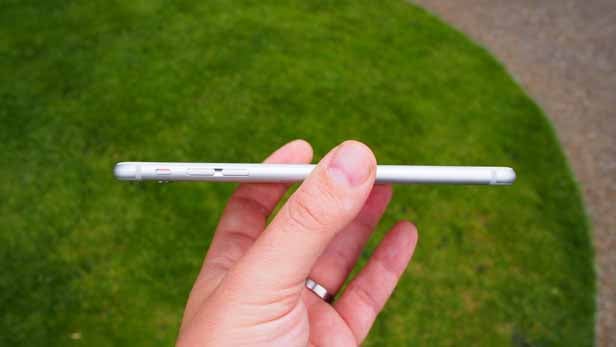 There’s only one area where the iPhone 6 deviates from the principles of smooth, seamless design and that’s with the rear camera. To ensure no compromise on image quality due to the slimness of the phone, Apple has had to raise the camera slightly from the body. But it isn’t anywhere near as severe as some other phones.  Put a case on and you won’t notice this at all, but you will feel it when holding the phone in landscape. Helpfully, the edges are lightly chamfered, which means it slips into pockets without snagging at all. 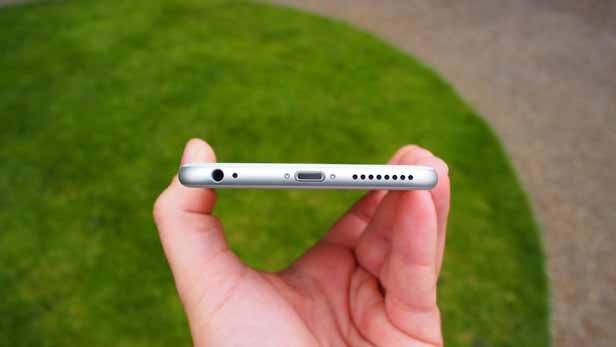 All-in-all the iPhone 6 has an accomplished design. It doesn’t scream ‘look at me’, instead it’s refined, elegant and ergonomic, great for long hours of use, whether you’re gaming or visiting your favourite sites. Do we like it more than the HTC One M8’s design? The jury’s still deliberating; we have mixed views at the Trusted Reviews’ offices.

There’s one final thing to talk about. The iPhone 6 is not water or dust resistant unlike the Galaxy S5 or Sony Xperia Z3. If that’s important for you then you’ll need to either opt for a waterproof case or go for one of the Android phones.