What is the Motorola Moto X?

The Motorola Moto X is the more expensive, more powerful brother of the Moto G, our favourite budget phone of 2013. It’s a totally different proposition, though. It costs £380 SIM-free, similar to the current best deal for the Samsung Galaxy S4. If you want a relatively small phone with good specs the Moto X is solid, but tumbling SIM-free prices of phones from the big names make it a slightly tough sell.

If you don’t fancy reading our full review or want to see the phone in action for yourself, watch our Moto X video review below.

The Motorola Moto X looks very similar to the Moto G. It’s a curvy phone with a plastic shell that has a clear seam where the rear battery plate connects with its frame.

In the US, people buying a Moto X get to choose from thousands of different style variations, including a wood finish. However, this has been dropped for the UK. You can pick between ‘woven’ white and black finishes, designed to look like they are made out of something fancier than plastic. The smooth, soft finish feels better than a basic plastic shell, but it’s still a polycarbonate case. And unlike the Moto G, the back is non-removable.

Where the Motorola Moto X design excels is in fitting quite a large screen into what feels like a small body. The screen bezel is very slim, particularly towards the bottom of the phone. You get the same 4.7 inches of display as the HTC One, but this is a significantly smaller mobile. 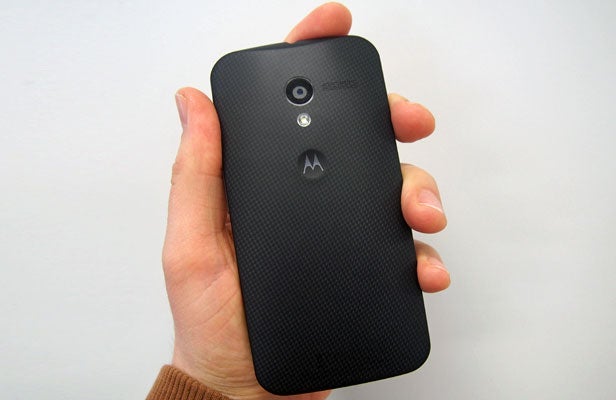 It’s the height of the phone that’s most notable. The Moto X is 129mm tall – petite compared to the 137mm HTC One, 138mm Nexus 5 and 136mm Galaxy S4. This is the least obtrusive, least showy ‘high-end’ phone you can get.

Your pocket will thank you for buying a Moto X, but it means this is likely to be confused for a lesser phone by many people.

Squashing down the footprint of the phone has also ensured that it’s not all that thin. At 10.4mm it’s quite chunky for a £400 phone – at least 1mm thicker than the phones it competes with. However, the curvy back is most similar to the top-notch HTC One’s, giving a smooth and easy grip. 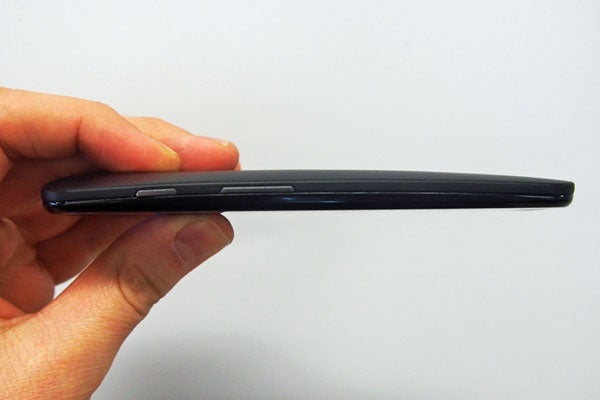 Another comparison you can’t help but make here is with the Moto G, a phone that looks the same but costs a third of the price. While they look similar, the Moto X is finished more gracefully in a number of places. The most obvious is the screen surround. Where the plastic juts out beyond the screen a fraction in the Moto G, it curves around to form a much tighter join in the Moto X, avoiding the rough feel of its cheaper brother.

Its backplate is also glued on, for a zero-creak body, and it’s significantly slimmer. The Moto X also uses a pop-out SIM tray on its side, rather than a slot hidden under its battery cover. It’s the unusual nano SIM type, used in the iPhone 5S.

A final little hardware improvement, the Moto X also has superior, tighter vibration feedback motors. That the Moto X and Moto G are brothers is unmistakable, but those claiming the Moto X is merely a Moto G with some upgraded insides are wrong. It’s at least five per cent classier. And it has the 4G and NFC connections missing from that budget phone. 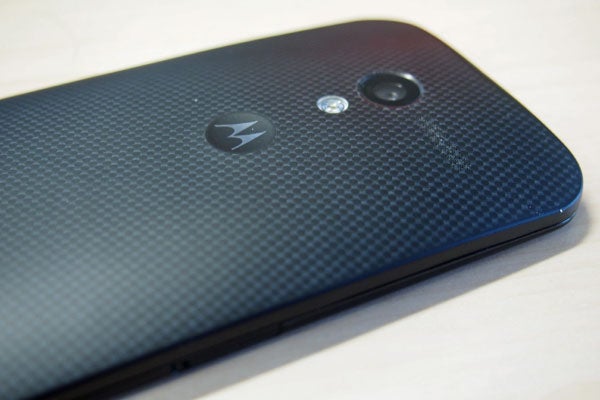 The Moto X comes with either 16GB or 32GB of internal memory and, like many top-end Androids, there’s no memory card slot to let you add storage. Its USB port is MHL-compatible, though, enabling you to plug the phone directly into a TV if you have the right adapter. One isn’t included, but they are available for as little as £10 online.