The HTC One M8 runs Android 4.4 and a new version of HTC’s custom Android interface, Sense 6. Although HTC says it has been redesigned from the ground up, it’s fairly similar to the version we saw on the original HTC One.

Visually it has taken a few steps closer to vanilla Android, but most of the Sense trademarks remain. You get the BlinkFeed scrolling update ‘widget’, the ultra-simple HTC clock (a far cry from the ‘classic’ Sense clock) and a vertically-scrolling apps menu. Although HTC has applied its own look to the Android system, its core structure remains the same.

One obvious functional difference between the M8 software and the old HTC One’s is that the physical soft keys have been switched for software ones. This helps to cut-down the amount of space needed for hardware, and is one more step towards the Android norm. The 2013 HTC One only had Back and Home buttons, but the One M8 also has the Android staple multi-tasking button that lets you see and close down any recently-run apps. 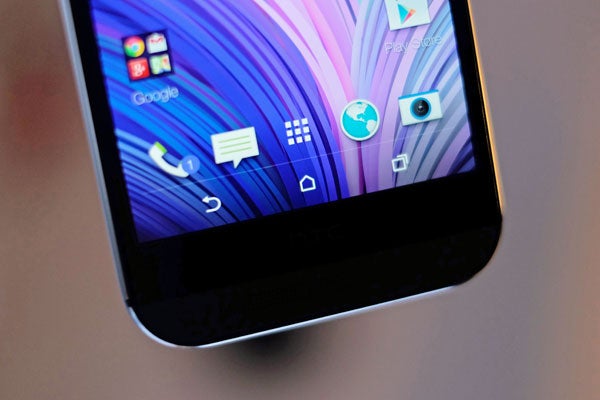 BlinkFeed no longer scrolls in pages either – it’s a full-flowing scroll this time. It would be easy to say this makes it more like the Windows Phone interface, but this free-flowing style is really how everything works. Facebook, Twitter, and all the web pages that can feed into BlinkFeed all (more or less) scroll freely.

Have no idea what BlinkFeed is? It’s HTC’s digital update screen, used in lots of its Android phones. It can pull messages and such from Twitter, Facebook and others, as well as pulling-in articles from your favourite websites. It arranges them into colourful blocks. I found it a great improvement – the jagged style of the original eventually turned me off, but I’ve been using BlinkFeed happily during testing this time. You can still remove BlinkFeed easily, though. 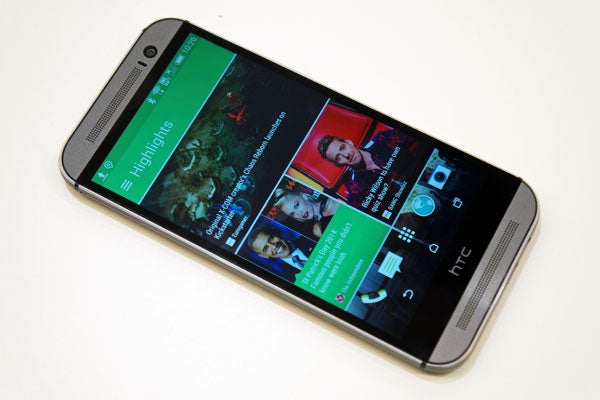 Switching between the One M8 and the old HTC One, the new phone does feel a little snappier. Part of this is down to a quickening-up of the animations that take you from home screen to app screen and vice versa, but we did notice fewer glitchy pauses when moving between apps and so on, compared to the HTC One.

This is no surprise when the M8 uses a much faster processor, the Snapdragon 801. It’s a solid generation and a half beyond the HTC One’s Snapdragon 600 chip. We’ll delve into performance in more depth on the next page.

First, let’s look at the other apps on offer in the One M8. 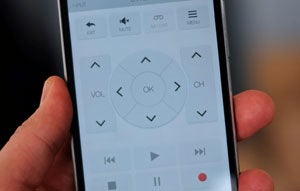 This app was available in last year’s HTC phones, but it has been given a tweak for this year. It gives you a TV guide for the channels in your area, and lets you control your home entertainment gear with the phone. This uses the IR transmitter, which sits on the top of the HTC One M8.

We tried hooking up an Onkyo receiver and an old Pioneer Kuro TV, and we were up and running within a few minutes. What it does is to ask the manufacturer of your home entertainment kit, before trying out that maker’s known remote ‘types’ by trying the ‘power on’ command. Once configured, you have a virtual on-screen remote that merges the functions of the various bits of kit. 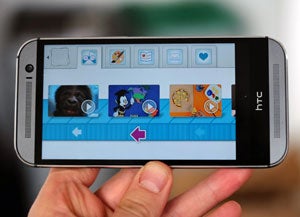 Once again something we’ve seen before, Kid Mode is an app made by Zoodles (not HTC) that offers a safe environment for young ones to play with your phone without accidentally spending you cash or clicking on something they shouldn’t.

It’s a cute and lightweight app. And while it’s nothing wholly exclusive to HTC, you can access it from the ‘power off’ menu, making it all the more useful. 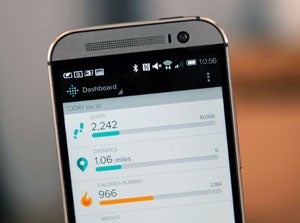 Another non-HTC-made app inclusion is Fitbit. We’ve reviewed a number of dedicated Fitbit fitness trackers, but this app lets you use the HTC One M8 as a pedometer itself. It’s a neat inclusion – and something that draws people’s attention to the idea you can do this sort of thing with your mobile.

The Motion Launch processor means you’ll be able to track your steps without using too much battery as well. However, this isn’t really anything exclusive to the One M8. Other phones can do the same by downloading the Fitbit app.

The HTC One M8 has two music players. One is the normal Google app, the other an HTC-made app.

It’s bound to cause a bit of confusion, but the extra HTC one is a valid addition. The Google music player is has become all about getting you to stream cloud-based music while the HTC app is there to let you play locally-stored tracks: to let you use the HTC One M8 like an iPod, basically.