HTC 10 long-term review: Still one of the best phones around

The HTC 10 has stood the test of time remarkably well. After months of use I haven’t had any serious issues with the phone.

Unlike competing phones, like the Huawei P9, the HTC 10 remains lightning fast. Games open in a matter of seconds and run chug- and stutter-free and I’m yet to have a serious software crash.

Related: HTC U11: This HTC’s next flagship

The phone has also survived more than average wear and tear. As well as several standard accidental drops onto TrustedReviews’ carpeted floor, the phone also survived a hazardous impact with a tree after an accidental trip while running. It remained crack and chip free.

Battery life has slightly deteriorated, but not as much as I’d expected. The HTC 10 still easily lasts a full day off one charge and I regularly manage to eek out two days with light use.

The camera is still a slight annoyance, but only because I’ve experienced the majestic awesomeness of the Galaxy S7 – which still has the best phone camera sensor on the market.

The HTC 10’s camera isn’t bad, but the use of Ultrapixel tech, which instructs the camera to capture bigger pixels and more light, works a little too well. Photos taken in even moderately bright lighting conditions are regularly washed out and have unwanted flare effects. Careful use can get around the issue, however, and I’m still more than happy to snap memento shots of meetups with friends.

However, the phone’s biggest selling point remains its advanced audio qualities. HTC’s been leading the mobile audio market for quite some time and the 10 cements its position as the best phone maker for music fans.

Putting aside the phone’s Boomsound speakers that, while above average, are only useful to cretins that insist on using their phone to listen to music outloud, the HTC 10’s standalone headphone amp is its best feature.

The HTC 10 uses a dedicated DAC as well as headphone amp. HTC claims the 10’s amp is twice as powerful as competing phones, and after a few months with the phone I believe it. The HTC 10 consistently delivers superior audio quality to competing phones, including the Galaxy S7, LG G5 (without its add on DAC), OnePlus 3 and Huawei P9 on a variety of genres.

Everything from heavy metal, punk, prog and jazz sounds fuller and better balanced on the HTC 10 and it’s a key reason the 10 remains my handset of choice, even though it falls behind its archrival, the Galaxy S7, in other areas.

After the frankly awful HTC One M9, the Taiwanese brand went back to the drawing board and, well, it worked. The HTC 10 more than matches up to the iPhone 6S in looks, and it doesn’t fall behind the Samsung Galaxy S7 when it comes to specs.

With its sloping curves, aluminium body and clean front, the HTC 10 is one of the best looking phones on the market, but with the iPhone 7 and Samsung Galaxy Note 7 coming soon is it still worth buying?

While the HTC 10 takes the brand’s flagship smartphone in a new design direction, it’s still very familiar. The front is stripped from the One A9, and the back is a tweaked and tuned version of the rear casing from the One M9.

It’s far from original and looking at it face-on you’d be forgiven for confusing it with an iPhone or Samsung Galaxy S7, but for me it’s the perfect mix of style and substance.

First off, this phone is clearly made from metal – and proud of it. The back is cool to the touch, with an elegant curve that helps it sit comfortably in your hand. This curve flows into some heavily chamfered edges that add a bit of much-needed flair.

It’s a divisive design choice, though. I really like them as they give your fingers somewhere to sit, but the some of the TrustedReviews team were less impressed, claiming they’re far too shiny. 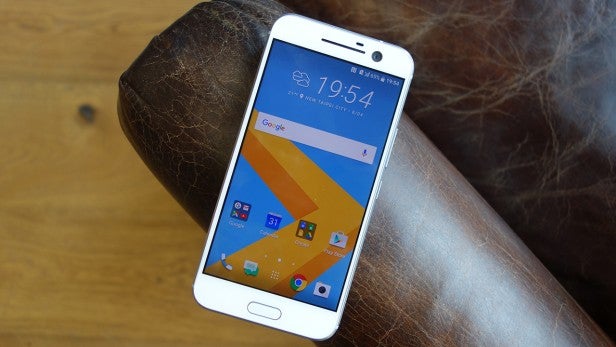 The camera sensor sits bang in the centre, and while it doesn’t have what I’d consider a ‘hump’, it does jut out ever so slightly. Alongside it is an LED flash and a space for the laser autofocus system.

Like any metal phone, the sleek design is broken up by two bands of antenna lines that run around the top and bottom. These don’t stand out anywhere near as much as they do on the iPhone and they feel like part of the design, rather than something that has to be there.

Along the side you’ve got the usual combination of a volume rocker and sleep/wake button, the latter of which is bevelled and easily identifiable even when the phone is in your pocket.

Most other phones have switched to a single tray that houses both the Nano SIM tray and a microSD card, but the HTC 10 still has one tray on each side. I’d like to see this combined to makes things sleeker, but it makes little difference in reality. 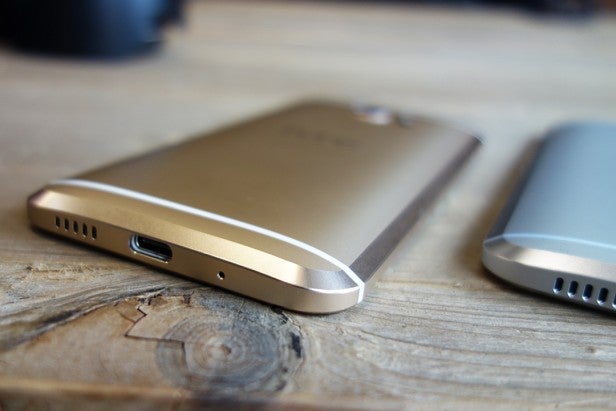 Flip the phone over and the HTC 10 is one of the cleanest devices around. HTC has even removed its brand logo – a minimal change that makes a big difference.

Compared to last year’s One M9 flagship, there are a couple of major differences here.

There’s now a capacitive home key sitting below the display that isn’t so much of a button but a touchpad. Like pretty much every worthwhile Android phone this year it features a fingerprint scanner inside, but coming from the Galaxy S7 it feels strange not to get get that satisfying ‘click’ when I press down.

HTC has also switched to capacitive Back and Recent Apps keys, as opposed to on-screen versions, and these sit either side of the home button. It’s all down to personal preference whether you prefer physical or virtual buttons, but it does free up that extra bit of screen real estate. 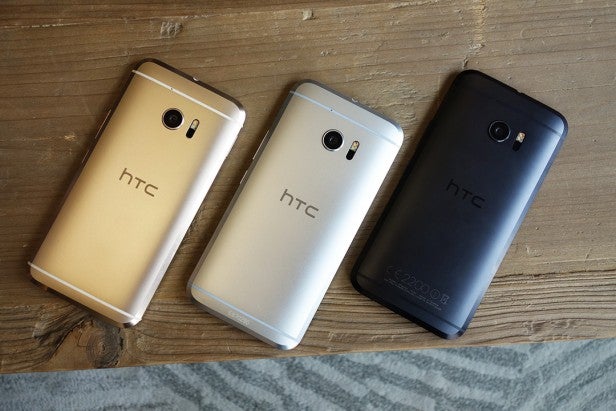 The phone comes in black, silver and gold

Whereas LG took plenty of risks with its funky modular design of the G5, HTC has played it relatively safe here. That’s not a dig, though. In fact I’d say the HTC 10 is my favourite phone of the year so far when it comes to the overall look and feel.

It almost matches the Galaxy S7 for size, though it’s marginally taller and noticeably weightier. It feels reassuringly expensive and solid, which is something I just can’t say about the LG G5.

Considering its history, it’s no surprise that HTC has designed a stunning looking phone. It hasn’t taken risks and opted for something more ‘out there’, but it still has charm and is an absolute pleasure to use.

HTC has updated just about every part of the One M9 for its successor, and the display is no exception.

It’s grown slightly to 5.2-inches, but the bigger upgrade is the resolution. It’s much more pixel dense now, thanks to the 2560 x 1440 quad-HD resolution, and it covers 99.9% of the sRGB colour gamut. It’s a mightily impressive panel, though as it’s LCD – 5th-generation LCD, to be precise – it does lack a little of the vibrancy of Samsung’s Super AMOLED screen. It’s not far off, and it’s hard to notice unless you have both phones sat next to each other. 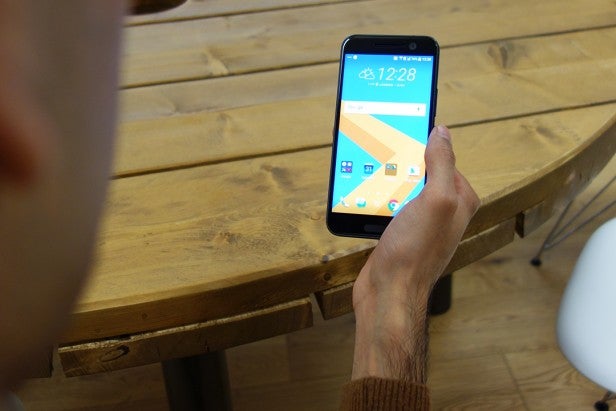 It’s a lovely display to look at. Colours are punchy and bright, without being oversaturated, and they’re accurate too. The wide colour gamut is great for watching video as it was originally intended and accurately editing snaps, making this a strong media machine.

There is a slight pinkish tinge to the display when it’s tilted to the side and this dampens viewing angles, but it’s not a deal-breaker. Viewing angles are still great and reflections are kept to a minimum, but colours are skewed ever so slightly when you’re not looking directly at it. I had a similar issue with the Galaxy S7 Edge, so it’s certainly not a problem exclusive to HTC’s displays.

The HTC 10 is missing a feature both the LG G5 and Galaxy S7 tout, which is an Always-On mode. This clever method of displaying your most recent notifications when the display is seemingly off is far from essential, but it’s a useful extra that I’ve grown to like after using those two phones. LG managed it with an LCD screen, so I’m not sure why HTC hasn’t tried anything similar.

What it does offer over its rivals is improved brightness. Well, in certain situations. In regular use, the maximum brightness on the HTC 10 is much brighter than that of the LG G5 and Galaxy S7, though it doesn’t feature the trick used by those two where it can boost brightness even more in direct sunlight. Still, the HTC 10 is perfectly usable outdoors.