This phone has been replaced: LG G5

Update: The LG G3 has dropped in price and that makes it a bargain

There’s a hell of a lot to like about the LG G3. For a start it was the winner of the TrustedReviews Best Phone Award 2014. Its combination of clever design, excellent camera and top-notch screen made it a cult favourite that deserves to sell by the bucket-load. In a world with Apple’s iPhone 6 and Samsung’s Galaxy S6, though, that’s a tricky feat.

And even though the LG G3 has now been superceded by the LG G4, it’s still a formidable phone – particularly when you factor in its new low price of £260 / $380 SIM free. That really is a bargain and here’s why.

Firstly you get a 5.5-inch screen in a phone that’s not far off the size of the 5.1-inch Galaxy S5. This really is a phablet trapped in a normal phone’s body. It’s not just the size of the screen that’s a bonus – it is also super-sharp thanks to a QHD resolution. That’s a lot sharper than the more recent 5.5-inch iPhone 6 Plus, although the LG G3 doesn’t quite match up in the brightness stakes.

Performance is also still as good as you’ll probably ever need. The quadcore Snapdragon 801 processor in the LG G3 powered a bevy of 2014 smartphones and tablets and is still plenty fast for daily use.

The best thing about the LG G3, though, is it’s 13-megapixel camera. This is arguably as good as the ones on the newer iPhone 6 or Samsung Galaxy Note 4. With optical image stabilization and incredibly fast laser focusing it manages to capture moments brilliantly. If cameras are the most important aspect of a phone for you then this is a big selling point, but the LG G4 does an even better job and comes with a manual mode that makes you feel like a proper photographer.

So what’s the catch? Well we’ve already mentioned that the screen isn’t the brightest, but the LG G3’s biggest problem is that despite packing a large battery its battery life isn’t that great. It’s not bad – it’ll last you a day – it’s just not as good as we’d like.

These are minor qualms, however. It’s difficult to think of another phone that offers as much bang for buck as the LG G3 manages to at its new price point.

The LG G3 might have been one of the last flagship phones to arrive in 2014, but it’s by no means the least. And it’s a worthy successor to the excellent LG G2.

This Android handset has an excellent 5.5-inch QHD screen and laser-focusing camera. Not only has LG caught up with the competition, but in some cases it’s raced past its rivals.

Since the LG G3 arrived, the iPhone 6 has shaken up the top of the phone tree, but an update to Android 5.0 Lollipop is on its way, which should help the LG G3 become even slicker.

The LG G3 is a massive phone that somehow manages to only feel big. Not too big.

For a start it’s light – just 149g. That does make it 4g heavier than the Galaxy S5, but it is more than 10g lighter than the HTC One M8 or Sony Xperia Z2. That doesn’t sound that impressive until you consider that the LG G3 packs a rather special 5.5-inch screen – almost half an inch larger than its key competitors. 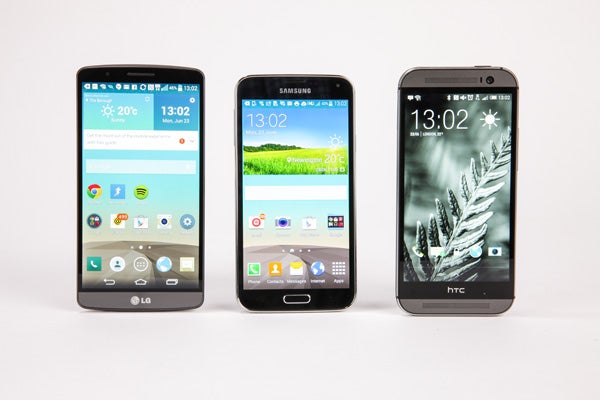 The slim screen bezels and tapered edge design also help the LG G3 feel reasonably trim when held. Its height and thickness are almost identical to the HTC One M8, although it is half a centimetre wider (dimensions: 146.3 x 74.6 x 8.9 mm).

The width is one of its most important aspects of a phone, it’s what most makes you stretch and juggle to reach a corner of a screen when using it one-handed.  The LG G3 is not quite as easy to handle as the HTC One M8, but it’s not far off and the benefit of the bigger screen makes the little bit of extra hassle a worthwhile trade-off. This is even more the case when comparing it to the Galaxy S5 which is just 2mm narrower but has a 0.4-inch smaller screen. 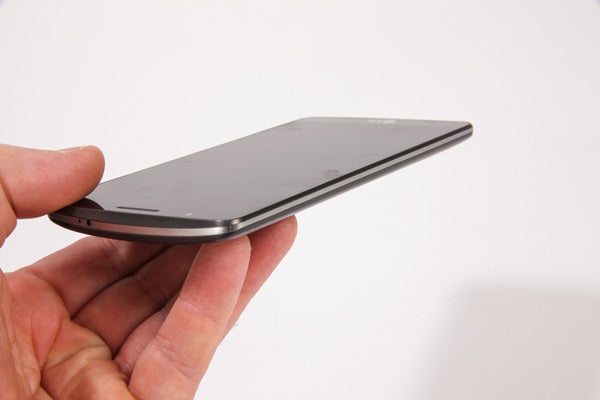 For such a big phone the LG G3’s ergonomics are impressive. The rear power and volume buttons that first made an appearance on the LG G2 are back, and they’re much better. Using buttons you can’t see on the rear of a phone takes a little getting used to. Once you do, though, you’ll really begin to value that there are no awkward side or top buttons that can be accidently knocked or that feel lumpy under your fingers as you hold the phone. The controls are also easy to reach with either index finger so there’s no difference to using the G3 whether you’re a lefty or a righty.

The buttons themselves are elegant, with the power button recessed into the vertical volume rocker making it easy to tell the difference by feel alone. The power button is circular with a faint concentric circle pattern while the volume rocker is oval and comes with a dotted texture. And while there’s no dedicated camera button you can get quick access by pressing the volume down button for two seconds. Do the same with the volume up button and Quickmemo pops on screen. LG has thought about the button design very carefully and it shows. 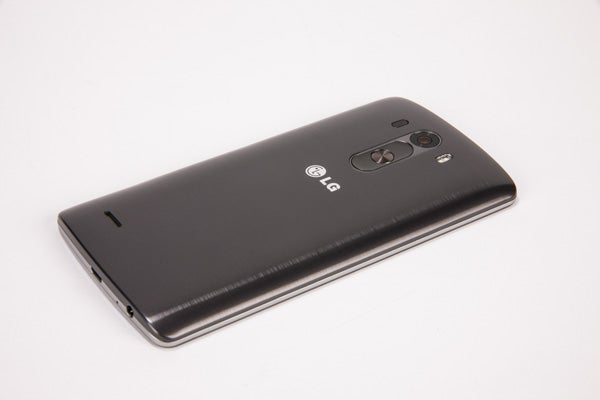 With the buttons hidden away on the back there’s nothing to break the clean lines of the LG G3 aside from a 3.5mm headphone jack and microUSB port at the bottom. This doesn’t just help with holding the phone comfortably. It is also more aesthetically pleasing.

It’s a bit of a shame, then, that the phone as a whole doesn’t feel quite as premium as it could. There’s nothing wrong with plastic, it doesn’t feel as slick to hold as metal but it can be a fine material to use for a phone. The Nexus 5 is a good example of a plastic phone that feels more expensive than it actually is.

The plastic rim that goes around the whole of the LG G3 and the plastic that surrounds the screen both feel like the same kind of material you find on cheaper phones. The removable back-plate that hides the microSD, micro-SIM and removable battery is a lot better, though, and is a big step up from the glossy plastic on the LG G2. Although also made of plastic it comes with a thin metallic coating that gives it a slight sheen and texture. You won’t mistake it for metal when you’re holding it, but it looks good, is suitably grippy and does a fantastic job of avoiding greasy finger marks. 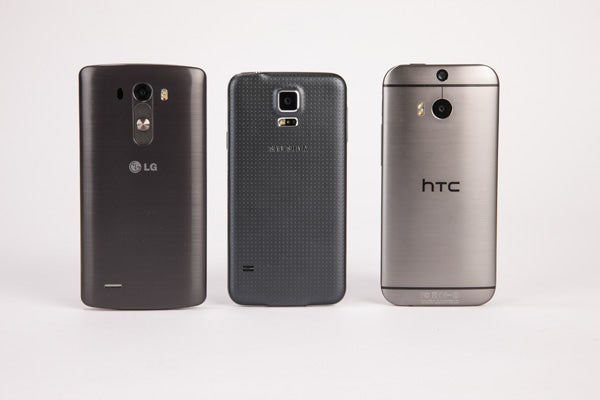 The LG G3’s design is a safe one that won’t polarise opinion as much as the dimpled back of the Galaxy S5 does, but at the same time won’t gain the plaudits of the solid and refined metal HTC One M8. And while LG has managed to keep the G3 as trim as possible for a phone with a 5.5-inch screen it is still a very big phone. If you’re used to sub-5-inch phones we recommend you go in store and try it before buying, particularly if you’re planning to add a case for protection.