The HTC One M8 has a 2,600mAh battery, up 300mAh from the last model. It’s an improvement, but both the Samsung Galaxy S5 and Sony Xperia Z2 have larger-capacity units. 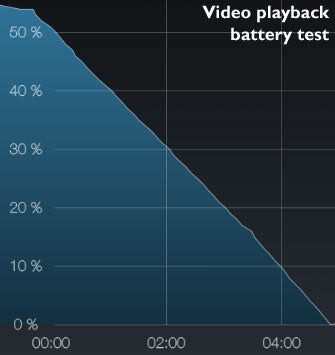 Sony’s Z2 is the outlier here, with a 3,200mAh battery. The HTC One M8 gives you absolutely no access to the battery either, and replacing it is apparently extremely difficult. A teardown by iFixit shows that the battery lives under the motherboard. You really need to tear the phone apart to get to it. However, unless you kill the battery by getting water into the phone’s insides, charge stamina should remain strong for a couple of years at least.

We tested the phone’s longevity with both relatively normal use and with a video test. Off a full charge it’ll last for just under 10 hours of SD-quality video playback, with Wi-Fi off and screen brightness set to around 50 per cent. That’s two hours more than we got out of the original HTC One.

This improvement is not just down to the battery size increase, but also the efficiency improvements of the Snapdragon 800/801 processors (the HTC One has an older Snapdragon 600 chip).

In day-to-day use, though, we found that it’s pretty easy to drain the battery in a day, if you take some photos, check your phone often, leave 3G on and do even the littlest bit of gaming on the way to work. Without using any of the power saving modes, we managed to drain the phone of most of its power by the end of the work day. This was after we’d done our main benchmarking of the phone, too. 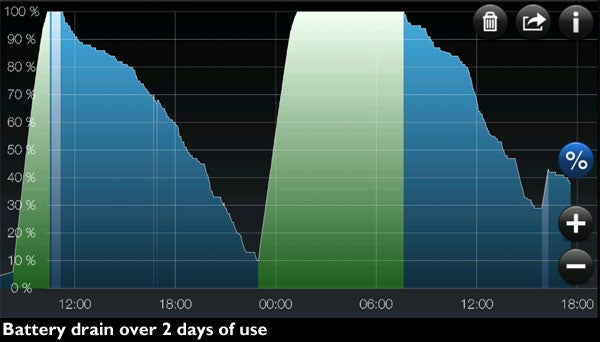 HTC Does offer a couple of power saving modes, both of which are very effective. One is designed for normal use, called Power Saver. This lets you throttle the CPU, reduce display intensity, turn off vibrate and constrain the data connection when the screen is off to increase the phone’s stamina. You can pick and choose which features the mode inhibits too.

If you want the phone to last a full two days, you need to use this mode. And it’s not too limiting either – you can happily use the phone on this mode long-term. This mode makes the phone use virtually no battery when in standby. 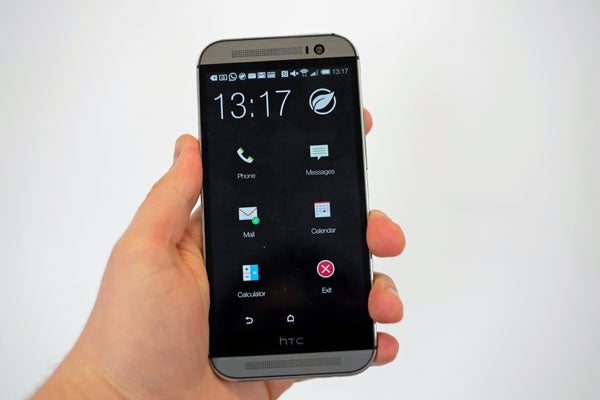 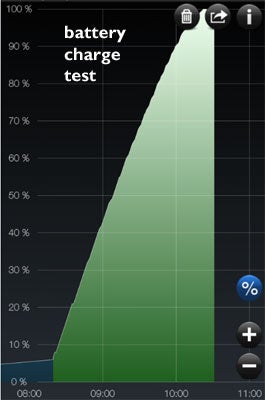 The next mode is for those who need the phone to last a few extra hours when it is about to die. It severely restricts what the HTC One M8 can do, providing its own basic interface (above) that only gives you access to five things – the phone, your messages, Email (not the Gmail app), Calendar and calculator. It also shuts off background data. You can automatically set this mode to kick in when the battery gets very low too.

Battery charging is pretty quick. You can go from empty to full in around two hours using the supplied 1.5A charger, and the speed of charging only drops off when the battery gets really quite full.

We were a little worried that the HTC One M8’s call quality may be affected by the ‘more metal, less plastic’ design, but we experienced no signal issues.

The call sound quality is beefier and chunkier than the norm, because the piezo driver used for the BoomSound top speaker switches to being the call speaker. It’s arguably not the perfect match to the task, lacking some of the bite you get with a dedicated speaker. But it does the job fine.

Running off the roll-call of connections in a top–end phone like this can be a bit dull, so we’ve left it to the end. The most important features to note include that this is a 4G phone, it is Wi-Fi ac compliant, it has NFC and the USB port on the bottom features MHL.

This lets you output video to a TV or another HDMI-equipped screen when used with the right cable. You can find them pretty cheap online. 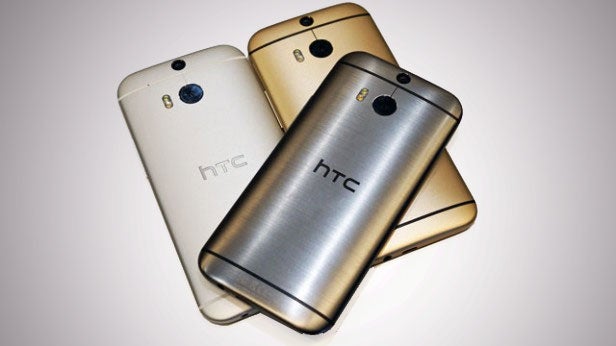 Should I buy the HTC One M8?

The HTC One M8 deserves its position as the top Android phone in HTC’s line-up. After the questionable design choices made in the HTC One Max, the M8 corrects its course to become a phone that is a worthy successor to the HTC One, our phone of the year 2013.

Its metal body looks and feels a lot better than the Samsung Galaxy S5. And as the core specs and screens are roughly comparable, this will be enough to convince many that HTC is the way to go. It’s not a bad move either – the look and feel of a phone does matter and the HTC One M8 nails this. HTC is setting the standard for phone design right now.

For that reason we’re very comfortable recommending it. It’s a fantastic phone. The only issue you may want to consider is the camera. It’s outstanding in low-light and very fast, but it has a strange approach to exposure metering and purple chroma noise issues that purists will notice. Does this make it bad camera? Categorically not, especially as the Duo camera (imperfect as it is) adds a unique and fun feature that’s perfect for Facebook, Instagram, Twitter and co. But it is something worth considering as you decide which phone to buy this year.

The HTC One M8 is a beautiful phone, showcasing HTC’s exceptional design-prowess. It lives up to the very high standards set by its 2013 predecessor, the HTC One, in almost all departments. There are a few niggling issues with the camera that need work, but in every other area the HTC One M8 is a modern classic.

Next, read our round-up of HTC One M8 problems