HTC One M8 – Performance and Gaming

The HTC One M8 uses the Snapdragon 801 processor, the same type seen in the Samsung Galaxy S5 and Sony Xperia Z2. However, both of these have a slight advantage over the HTC, in terms of core specs.

Where the M8 uses the 2.3GHz version of the 801, the Galaxy S5 has the slightly faster 2.5GHz version. HTC is making a 2.5GHz edition for some other territories, but we won’t see it in the UK.

Sony trumps the HTC One M8 with its RAM. Out of the three key flagships seen to date, it is the only one to have 3GB of RAM. The HTC One M8 and Samsung Galaxy S5 both have 2GB of RAM.

Do these differences really matter? Not really, and they have likely contributed to the One M8’s slightly lower price from some retailers. 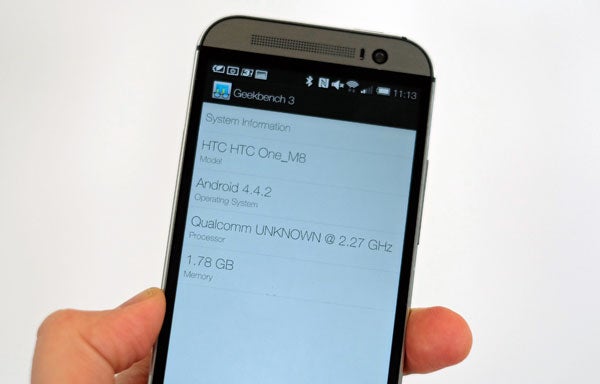 We’re yet to fully benchmark the Sony and Samsung rivals, but the HTC One M8 performs largely as expected in benchmarks. In Geekbench 3 it scores 2,840 points, which is either on-par with or just slightly above, the scores of the Snapdragon 800 tablets and phones we’ve reviewed over the past few months. It’s no wonder – the top Snapdragon 800 devices run at 2.2GHz, which is just a shade slower than the One M8. There are other optimisations, but it’s not a massive upgrade.

There’s a slightly more pronounced improvement in the 3DMark gaming benchmark. It scores 20,556, which is around 15 per cent better than some of the Snapdragon 800 devices we’ve tested.

There has been some recent controversy about manufacturers using score-boosting techniques to bolster their benchmark results, so direct comparisons should be viewed with caution. However, it is safe to say that the HTC One M8 is significantly – if not exactly dramatically – more powerful than a Snapdragon 800 phone like the LG G2. It is considerably more powerful than the first HTC One, though.

What is just as interesting is HTC’s bigging-up of the ‘Motion Launch’ processor, which is a low-power chip that monitors sensors like the accelerometer while the phone is in standby. This is what makes it possible to turn the phone on with a double-tap gesture.

However, it’s nothing radically new. LG phones have had this sort of sensor use for a while and Apple has already made a grand fuss about the iPhone 5S’s M7 motion chip. Such things are de rigeur, but HTC has made better use of it than most, using it to make turning the phone on more convenient. 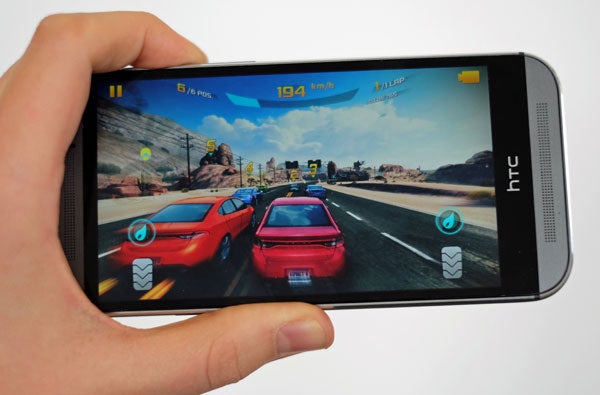 Back to actual performance: we tested the HTC One M8 with a bunch of high-end games.

Strangely enough, performance wasn’t quite as great as we were expecting. There are noticeable frame drops in Gameloft’s Asphalt 8 and in EA’s Real Racing 3 – although not to the extent that it really hampers play.

Another phone-testing favourite Riptide GP2 didn’t suffer from the same problems, though. It is smooth. We’re willing to largely attribute the performance niggles to developers not having fully optimised for the Snapdragon 801 chip yet, though, as otherwise there seems to be no other excuse. The benchmark results are as expected, and general performance is great. As we noted in the software part of this review, Sense 6 does not appear to be a real performance leech.