What is the Google Nexus 5?

Over the past few months It’s been very difficult to log onto a tech site or forum without hearing about Google’s fabled 2015 Nexus 5. According to industry rumblings the 2015 Nexus 5 will be built by LG, the same company that built the original 2013 Nexus 5.

If true, this will be now bad thing. While the 2013 Nexus 5 wasn’t flawless, key issues being its slightly buggy software and lack of expandable storage, it was seriously good value for money. With pricing starting at £299 for the 16GB model, the original Nexus 5 featured specifications traditionally only seen on handsets close to twice its price.

As a result, while Google no longer officially stocks the 2013 Nexus 5, it remains interesting as it offers a number of hints about what LG may have planned for its 2015 sequel.

There’s no doubt there were some serious issues with the software on the Nexus 5 when it first launched. In December 2013, Google updated the Nexus 5, bumping it up to Android 4.4.2. It has tried to address some of the most common and serious issues with the phone – mainly centred around the camera. At release, it was slow, had autofocus reliability issues, as well as exposure metering problems.

The Android 4.4.2 update tries its best to fix these complaints. The core photographic abilities of the Nexus 5 haven’t changed – it still has an 8-megapixel camera twinned with an f/2.5 lens. However, other elements have improved dramatically.

Most important of the lot is speed. The Nexus 5 camera is a lot more usable because it’s no longer incredibly slow and clunky.

The tone of the images has changed slightly too, with greater contrast and amped-up colours. Images ‘pop’ more, although some shades can look a mite oversaturated in some shots. Once you’ve accepted that the Nexus 5 camera is never going to be a photographic superstar, though, it’s a fair compromise.

For more on the camera updates, check out the dedicated Nexus 5 camera page of this review. However, carry on reading our original review below to find out more about what the Nexus 5 is like.

However, the forthcoming Android 5.0 Lollipop update should offer further improvements.

Google likes to use different manufacturers to make it’s range of Nexus products. The Nexus 5 is made by LG, whereas the Nexus 7 is by Asus and the Nexus 10 by Samsung. You probably wouldn’t know LG make it unless you spot the little logo on the back, though. It has none of the quirky design elements of the LG G2, which is no bad thing.

This is a deeply pragmatic phone in many respects, in that Google was clearly out to make a mobile that looks and feels great, without any of the flashy, budget-busting bits of a £600 phone like the iPhone 5S. The Google Nexus 5 is arguably much more conservative, design-wise, than the Nexus 4 it replaces.

The Nexus 5 is made of soft touch matt black plastic. It doesn’t sound as impressive as the aluminium of the HTC One, but the response from the TrustedReviews team was unanimous – it feels great.

Its back is lightly curved, adding to the hand-friendliness of the silky smooth finish. The Nexus 5 looks good, too. Every part of the phone bar the LED flash is black (a white version is also available), and the lack of any recognisable gaudy extras beyond the over-sized camera lens housing make it quite a ‘pure’ design.

It comes across as a much more confident phone than the Nexus 4, with its ‘jazz hands’ spangly finish and glass rear. 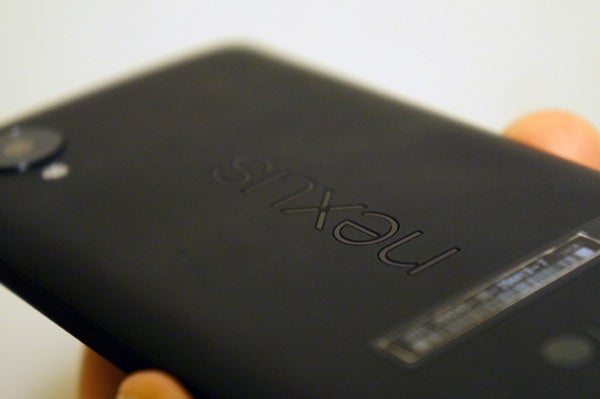 The one issue of such a simple-looking phone is that front-on, it’s not that easy to casually tell which way around it is. All navigation keys are part of the screen, so the only indicators are the deeply low-key earpiece speaker and front camera. It’s a bit of a phone ninja.

The lack of any flashiness is clear in its construction, too. Although the Nexus 5 does not have a removable back – there’s no battery access and no hidden memory card slot – this is not a unibody phone. The back plate and the plastic sides of the phone are two different bits, and there’s a clear seam between them.

We imagine this makes the phone easier to construct, and easier to fix. But to pedantic eyes, it’s something that shows this phone hasn’t been constructed on a limitless budget. 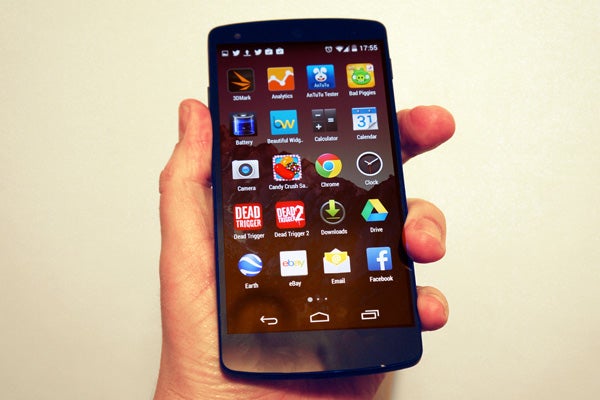 However, handling-wise it’s one the nicest phones in its class – beaten only by the slightly smaller HTC One. LG has put a lot of effort into making the Nexus 5 as narrow as possible, making it less of a handful, and it’s slim too.

The Nexus 5 is 69mm wide and 8.6mm thick. That’s 0.5mm narrower, and 0.7mm thicker than, the Samsung Galaxy S4. Being a budget-conscious phone hasn’t resulted in a remotely chunky body, and in-use it leaves the impression of being almost ‘all screen’ thanks to its super-slim screen bezel. LG has done a fantastic job as manufacturing partner here. 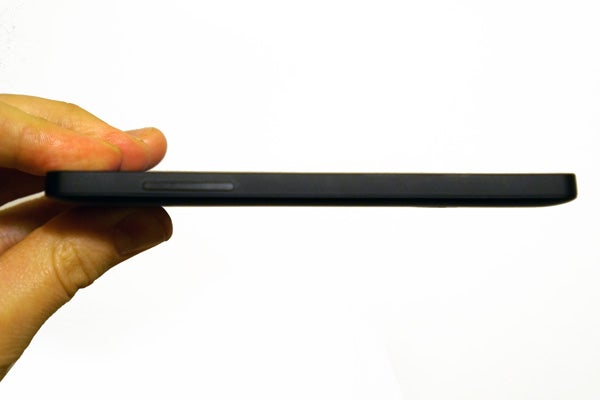 Like any 5-inch phone, though, reaching from one end of the screen to the other with a thumb is a bit of a stretch. If you have small hands, we recommend trying before buying. You might find the likes of the Sony Xperia Z1 Compact with its 4.3-inch screen more manageable.

In common with many phones with non-removable rear panels, the Google Nexus 5 uses a pop-out SIM tray. It takes microSIM cards – now the most commonly used type in high-end phones.

One other hardware feature worth a nod is the well-executed notification LED. It’s a multi-colour LED whose light is diffracted slightly to give it a ‘glow’ effect, and it sits dead centre below the screen. Its low-key style fits in perfectly with the phone’s self-assured low-key design. Like so many elements of this phone, it’s simple, and it’s good.

The Nexus 5 isn’t a phone that panders to all the demands of the hardcore tech geek brigade, though. There’s no dedicated video output (extremely rare these days) and no way to expand upon the 16GB or 32GB of internal memory. We don’t think these are significant downsides unless you’re looking for a video jukebox phone, though.