Last year was a great year for smartphones, but Samsung’s Galaxy S6 Edge may just have been the best handset of 2015.

Now that the Galaxy S7 and Galaxy S7 Edge have been launched, there’s never been a better time to invest in the company’s previous flagship device.

Combining innovative design and top performance with one of the best cameras on the market, the S6 Edge remains one of the most impressive handsets you can buy – especially now prices have fallen in the wake of the new generation of Galaxy phones release.

What’s more, the S6 Edge recently received a refresh with Samsung’s launch of Android Marshmallow. You can find a rundown of all the new features in our Android 6.0 for Samsung Galaxy S6 and S6 Edge piece. But here’s a brief list:

What this means is that not only are the S6 Edge’s design, build quality, and features still outstanding, but the new Marshmallow OS means you’ll get the same user experience as you would with the S7 Edge.

You can read our original review of the Galaxy S6 Edge below.

What is the Samsung Galaxy S6 Edge?

Attention may currently be firmly locked on the recently unveiled Galaxy S6 Edge+, but it’s important to remember there’s a smaller alternative option for smartphone buyers looking to reap the benefits of Samsung’s “Edge display tech.”

Unveiled alongside the Galaxy S6 earlier this year, the Galaxy S6 Edge is is the second ever smartphone to feature the Edge display technology Samsung debuted on the Galaxy Note Edge phablet.

Edge displays are curved screens that wrap around smartphones’ sides. They are designed to complement the phone’s main screen and offer increased display space for the users.

There’s a refreshing honesty about the S6 and Galaxy S6 Edge’s design. There’s no attempt to make smooth plastic look like metal, or textured plastic look like leather. No, this time around the edge is made of aluminium alloy that feels just as strong as it looks. The front is covered in Gorilla Glass 4 – the latest version of the popular toughened glass – and so is the back. Nothing feels cheap about the S6 Edge apart from a couple of tiny throwbacks to a bygone era – the ear speaker grille looks like metal-painted plastic and the inside of the SIM tray is plastic. 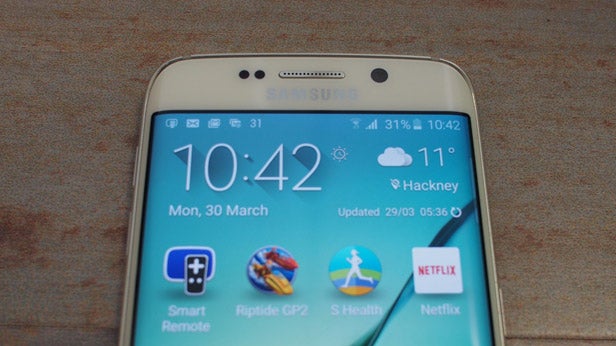 It’s not just the materials that are top notch, either; it’s the way they’re put together. The diamond-cut edging brings a lustre to the metal border that’s reminiscent of the iPhone 5, but thinner and more tasteful. The SIM-card tray sits flush with the top of the phone and looks better integrated than the slightly recessed tray on the HTC One M9.

What’s most amazing is that Samsung has managed to pack a 5.1-inch screen into a body not that much bigger than the 4.7-inch iPhone 6. That means you can easily get to all areas of the screen, even with normal-size hands, which is something you can’t on the 5-inch HTC One M9. 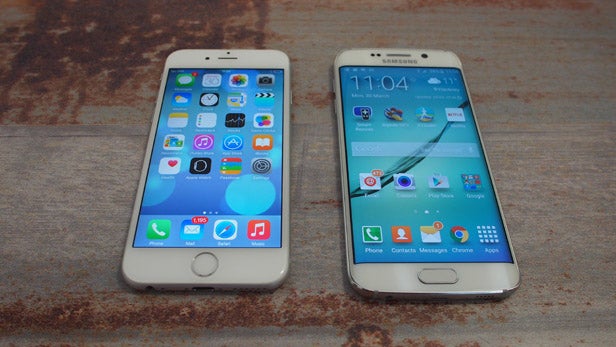 The S6 Edge isn’t much bigger than the iPhone 6

The buttons on the Galaxy S6 Edge are also brilliant – firm and with just the right amount of spring. Their location is excellent, with the power button a few inches from the top of the right edge, while the volume ones rest a little higher on the left. You’ll never mistake one for the other – a common complaint made against the One M9.

If there’s one thing we’d change, it’d be the rear camera. It juts out of the back like an unsightly pimple. It’s not quite as ugly as the one on the Galaxy S6, a marginally thinner phone, but it still spoils the otherwise perfect-ten looks of the S6 Edge. 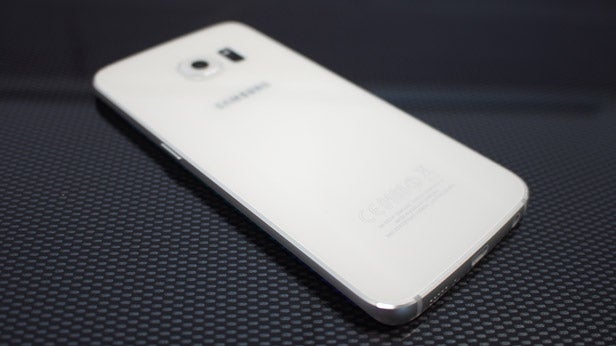 On the plus side, the glass back is surprisingly grippy – much more so than the one on the Sony Xperia Z3. The white version we tested doesn’t have a problem with fingerprint marks, but you might want to keep a cleaning cloth handy if you go for the more colourful options. Some colours, like the gold and green, look a little tacky too.

If there’s a problem with the design, it’s how the edges make the S6 Edge less comfortable to hold than other phones. That’s because the edges taper the wrong way – away from your hand. What little edge there is slopes back into your hand to combat this, but it still has a sharper, pinching sensation compared to other phones. It’s not intolerably bad, but we prefer the iPhone 6’s curved edges and the HTC One M9’s curved rear, which follow the contour of your palm. 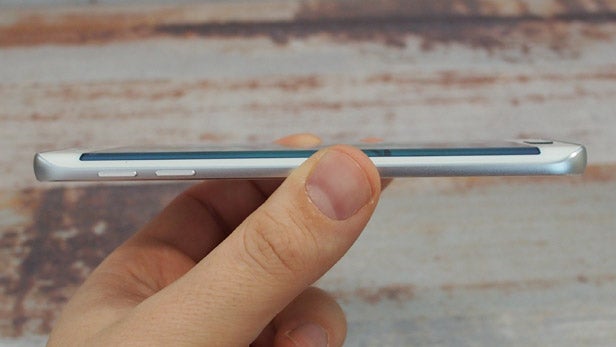 We can put up with some idiosyncrasies for a phone this stylish, though, and there a few other foibles you should be aware of.

One is how, at first, it’s all too easy to hit the soft keys accidentally. There’s so little space left for them that you’ll often find yourself pressing the Back or App Switch key by accident. You learn to hold the phone more tentatively over time, but it’s an issue.

Another is the home button, which houses the fingerprint scanner. It isn’t flush with the front of the phone and, like the Galaxy S5 before it, this means that it can be unwittingly pressed while in your pocket. It might sound like a small issue, and as long as you have a lock you shouldn’t be calling any people you don’t want to, but it does turn the screen on and this could have a direct impact on the S6 Edge’s battery life. 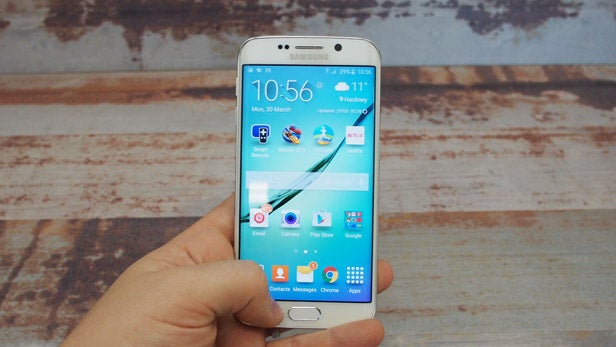 Trickier to solve is how the curved screen makes it all too easy for your hand to brush against the edge of the screen, which prevents you from scrolling or hitting a link with your thumb. It takes a moment to realise that the phone hasn’t frozen; it’s just that part of your palm is resting on the edge of the screen. We fear this could become a common problem as brands push edge-to-edge displays.

But so far we’ve found these little irritations to be just that – little. We can forgive them for the general look and build quality of the S6 Edge. They could grow into relationship-ending resentments, but our gut feeling says they won’t.