Let’s start with the camera app first. Samsung lets you tinker with the finer points of photography far more than many manufacturers. That’s not to say that it’s hard to use. Leave it in Auto mode and the S6 Edge manages to focus and work out the right settings for the situation without much hassle at all. If you do want to tinker, though, you can. Open Pro mode and you have a host of options and dials to fiddle with such as white balance, ISO and macro.

Of course, the app also lets you add a range of filters for all the instagrammers out there, but also has a more effective Bokeh app, called Selective Focus, than the HTC One M9. Another nifty feature worth mentioning is Virtual Shot. This is like panorama in reverse. Select an object and rotate the camera round it and you get a little 360 degree video of it.

The S6 Edge comes with a 16-megapixel rear camera with optical image stabilisation (OIS). It’s not the first phone to have OIS, but it is rare to see in such a compact phone. OIS compensates for the little movements you make with your hand when taking a photo, helping reduce blur. It’s a great addition to a phone’s camera.

The Galaxy S5 had one of the better cameras of last year and the Galaxy S6 Edge manages to best it, particularly in challenging conditions. We started our test at the Tate Modern in London and a huge installation in the main hall.

As well as the Galaxy S5 we also tested the S6 Edge against the iPhone 6 and iPhone 6 Plus as well as HTC’s latest flagship the One M9. All phones were tested using the automatic mode. 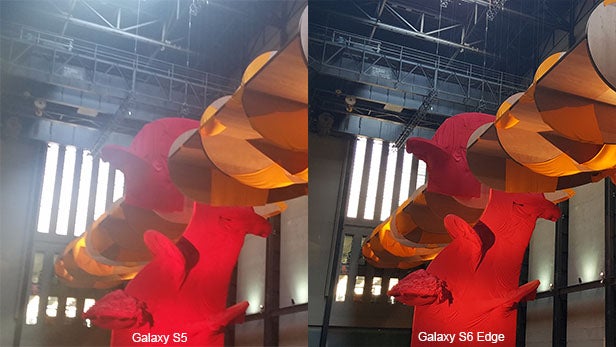 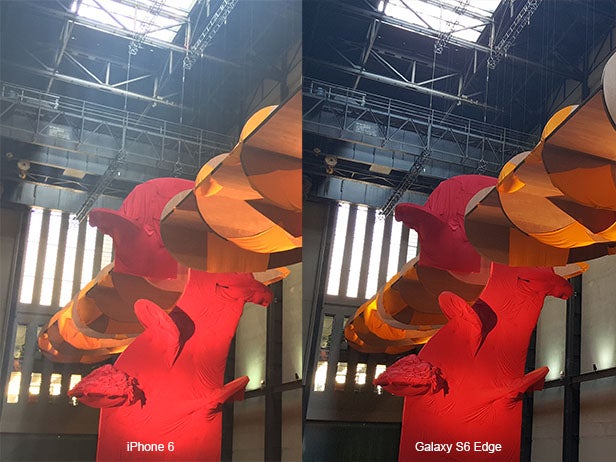 The iPhone 6 is better than the Galaxy S5 when dealing with tricky light sources, but not as good as the S6 Edge. The Galaxy S6 Edge manages to portray the colours more accurately and provide some extra detail in the folds of the fabric. It also deals with the bright sunlight coming in from the rear windows better than any other phone we tested.

When it comes to detail, the Galaxy S6 Edge’s camera also manages to trump the competition, even though it has a lower resolution than the One M9. 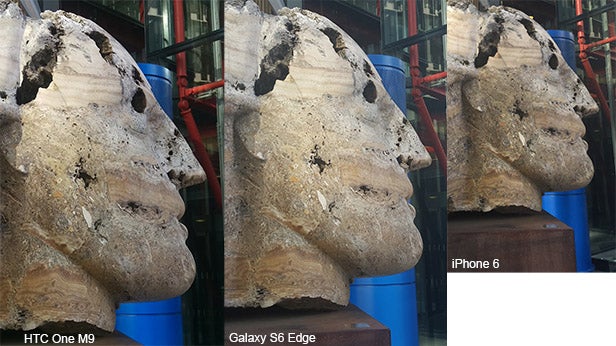 The S6 Edge does decent job with close-ups too,  providing plenty of detail and some natural shallow depth of field effects (where the object is in focus but the background is out of focus).

One thing we would say is that the colours are sometimes a little warm, almost as if we’ve added a filter. Whether you like it or not depends on your taste, but it does mean that whites sometimes have a pinkish tinge to them. 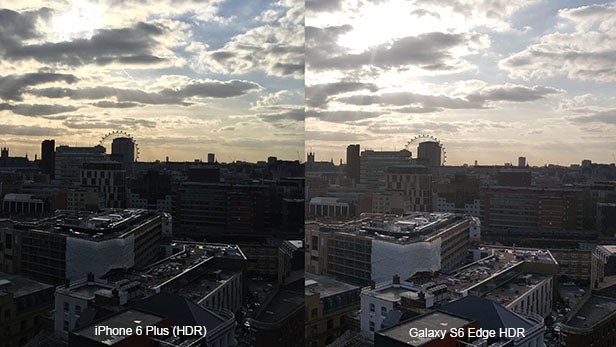 The S6 Edge favours a brighter foreground but loses detail in the clouds compared to the iPhone 6 Plus. It’s a subjective difference depending on what kind of shot you prefer.

In well lit conditions the Galaxy S6 Edge can take landscape shots that are crammed with detail, like this picture of St Paul’s Cathedral over the river Thames. 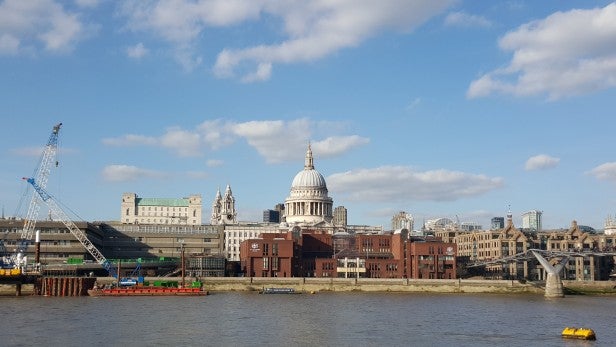 The camera on the S6 Edge is super-fast, too – pictures can be taken almost instantaneously even with HDR on. It really is rather brilliant.

In low light the S6 Edge again manages to show up its predecessor. It manages to take decent shots where the Galaxy S5 would flounder. The iPhone 6 is arguably still a little better in these challenging conditions, and once again the S6 Edges shot is a little too warm, the colours a little too saturated, but Samsung’s low-light performance has come on leaps and bounds since last year.

It’s not just the rear camera that has had an upgrade. Samsung has realised that the selfie generation is going nowhere fast and has packed a 5-megapixel sensor on the front that comes with impressive low-light performance. In fact, it’s almost as good as the HTC One M9 and miles better than the iPhone 6’s meagre offering.

The S6 Edge’s front camera is great for taking some selfies with your friends in a dimly lit bar or restaurant.

Video performance is solid, too. The S6 Edge manages to capture both audio and video well and quickly adjusts focus when moving from well lit to dark areas. You don’t get some of the toys other flagships provide – the biggest omission being 120fps slow-motion shooting – but it does shoot in 4K. Well up to five minutes of it anyway.