The screen on the Galaxy S6 Edge is a marvel. It’s not just the soft flowing curves that makes it special – Samsung’s Super AMOLED display technology makes it a cut above anything else on the market right now – barring the standard Galaxy S6, of course.

What makes the screen so special? First, it’s stunningly sharp – its 577ppi (pixels per inch) is a truckload more than the iPhone 6 and a fair amount higher than the Full HD (1080p) display on the HTC One M9. It’s incredibly sharp, even if it’s hard for the untrained eye to really care about the extra resolution. Both of those other phones are plenty good enough in the sharpness stakes.

The S6 vs the S5 pixel density

The benefits of the AMOLED screen come from its performance during dark scenes – this is a display that can show true black. That’s because, unlike the LCD technology on most other phones, AMOLED doesn’t rely on backlighting to illuminate its pixels – each pixel is illuminated individually.

It means when you’re watching a movie in the dark you won’t see light bleeding through the display, making dark scenes look grey. It’s just that bit more immersive. Dimly lit scenes look more authentic because the contrast ratio – the difference between the darkest black and whitest white – is effectively infinite. All this leads to a more engaging viewing experience when compared to the competition. 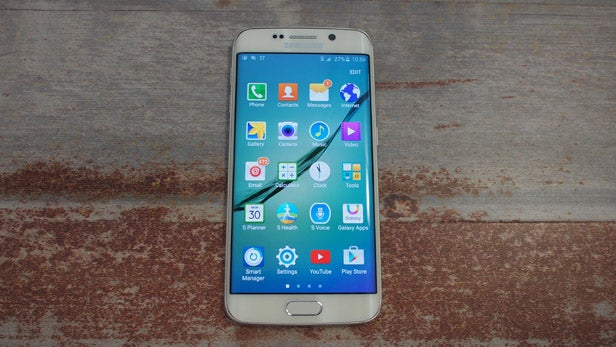 Colours are good, too, though you might want to tone down the initial, oversaturating settings to something less gaudy. Samsung’s Basic setting is the most true to life, but we find the AMOLED Photo setting strikes the right balance between colour vibrancy and accuracy.

In contrast to the stellar colours and deep blacks, whites don’t look as pure on the AMOLED Galaxy S6 Edge display. They have a slight bluish tinge that gets worse when viewed from an acute angle. It’s not bad – the iPhone 6 and HTC One M9 have a slight pinkish tinge – but the viewing angle on IPS LCD phones appears slightly better.

The curved edges also means that the top and bottom of whatever you’re watching is slightly off the main screen. It shouldn’t bother you too much, but it’s most likely to when you’re reading. The first letter on the left-hand margin goes a little over the curve. It remains legible, but in sunlight this edge gets some glare, making it harder to decipher the writing underneath. 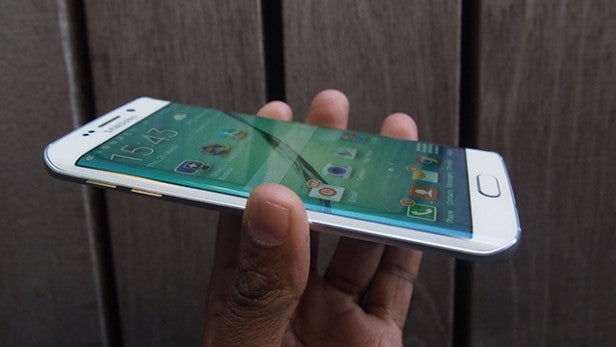 These are very minor gripes. The Samsung Galaxy S6 Edge has one of the best screens, if not the best screen, you can get on a phone. We score it better than the HTC One M9’s and iPhone 6’s – the Galaxy S6’s flat screen is the more sensible option in terms of day-to-day use, though.

The single speaker on the Galaxy S6 Edge isn’t as impressive as the screen, but it is very loud – as loud at top volume as similar smartphones, and a little louder than the Galaxy S5’s. It’s great for an evening’s bout of Netflix viewing – dialogue is crisp and clear – and it’s a perfect speakerphone for conference calls.

But it’s no good for music – there’s just not enough depth and the S6 Edge can sounds harsh and forced at higher volumes. If you want to listen to music then your best bet is to crack open the supplied earpod-style earphones, invest in a more serious pair of cans, or buy a Bluetooth speaker. 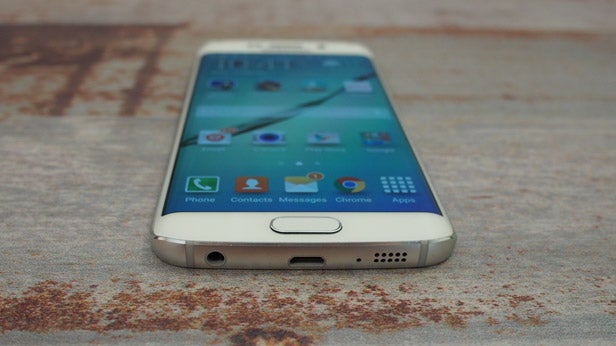 The speaker also suffers for being at the bottom of the phone, just like the iPhone 6’s. This makes it all too easy to muffle with a finger or palm, so you have to be careful how you hold it when watching a film or playing a game.

The HTC One M9 is streets ahead of the S6 Edge, thanks to its fantastic BoomSound Dolby Audio stereo speakers, but the Samsung has nothing to be ashamed of, and has improved on last year’s effort.