What is Android 6.0 Marshmallow?

It’s been a long time coming, but Android Marshmallow is finally starting to make its way to more and more devices. 2016 flagships phones, like the Samsung Galaxy S7, HTC 10, LG G5 and the Huawei P9, all come with the software installed and we’ve seen updates flying out to older devices like Sony’s Xperia Z5.

A quick scan of the feature list might have you asking why this update simply isn’t called Android 5.2. But spend time with a Marshmallow equipped device and the answer becomes obvious.

Now on Tap has the potential to be a killer feature; Doze’s battery optimisations improve standby time no end; and a host of minor tweaks add up to make the once confusing OS into a more inviting and user-friendly place. Lollipop brought the looks, but Marshmallow brings the performance.

Headlining Android 6.0 Marshmallow is Now on Tap, an extension of Google’s already fantastic Now service that’s been slowly getting better, cleverer and more aware since it was released alongside Jelly Bean.

Related: Google Now on Tap – what is it?

Now on Tap lives everywhere. In Hangouts, on the web, your email, Spotify and so on, and it’s designed to get you to the information you want, faster.

It works like this. From wherever you are in Android 6.0, you can press down on the home button to bring up a sleek animation that glides over the sides. Now on Tap will scan the screen and throw up suggested searches, links and information.

For example, if you’re in a text conversation discussing seeing the new James Bond movie Spectre, a Now on Tap request will bring up information such as cinema times and a link to the trailer on YouTube. It doesn’t stop there, however. Maybe you want to know who directed the latest Bond outing – just say ‘Who directed it?’ and the software will know what film you’re talking about spit out the answer. 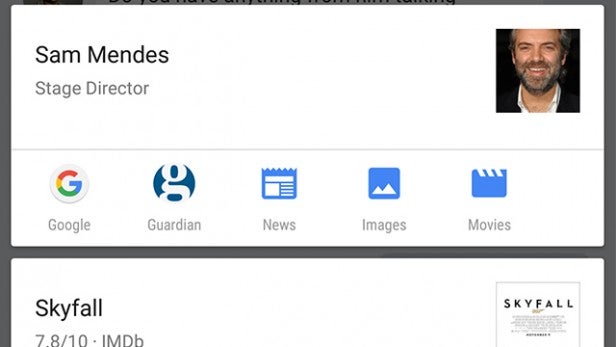 It’s a superb idea, and as yet it has no competition. Clearly, Now on Tap is the start of something huge – but it isn’t quite there yet.

There were plenty of times when the most obvious information didn’t come up. I suggested meeting at a pub, for example, but it didn’t pick up the location and just ask me to create an event without any further info. The feature would be great if it could piece it all together and create a complete calendar event.

Running into the “Nothing on tap” error is far too common, as are the times it just throws up a “no connection” page. 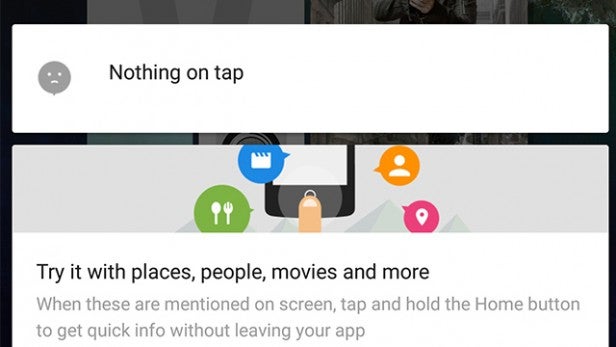 Having used Now on Tap for a few weeks, it hasn’t yet integrated itself into my daily regime. I’ve no doubt that will change with time and as the feature itself becomes smarter.

It hasn’t created quite as much of a buzz in the run up to release as Now on Tap, but for me Doze is the true killer feature in Marshmallow. At last Andoid is able to wave goodbye to its awful standby battery problem, which has plagued the operating system since the very beginning.

If you’ve used an Android phone, you’ll be aware of the extent to which the battery drains when the handset is idle. Before installing Marshmallow, I left a Nexus 6 unplugged overnight to observe this power drain. The battery dropped from 78% to 62% without me even touching it. In the same test, carried out on the same phone, with Marshmallow installed battery power reduced by only 4%. This is because of Doze. 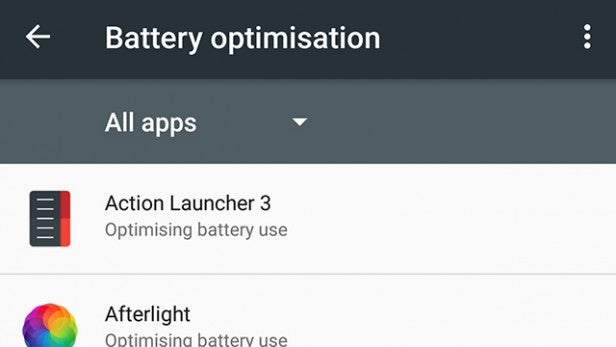 Doze is like a battery-saver mode, but one that’s always whirring away in the background.

When it senses your phone has been left alone for an extended period of time, it dials down the number of processes running in the background. Don’t worry – you’ll still receive notifications of calls and texts, but the system knows which alerts aren’t as important and it’ll stop these coming through.

The best thing is that you don’t have to do anything for these enhancements to happen; just use your Marshmallow device normally and you’ll witness huge battery improvements automatically.

You can dial down further and see if any applications aren’t optimised for Doze – just head into Settings | Battery | Battery Optimisation – but so far the only apps the service isn’t available for is Google Play Services. And this is something you really want running all the time.

With Doze, Android devices can now match the iPhone when it comes to standby time. Rejoice.