Samsung Galaxy S6 or S6 Edge? We’ve lived with both Android phones to help you decide between two of the best smartphones of 2015

Samsung surprised no one when it announced two versions of the Samsung Galaxy S6. The standard ‘plain’ version and the Galaxy S6 Edge.

We’ve reviewed them both, used them for an extended period of time and we can say they’re some of the best phones we’ve had our hands on so far this year. That’s comfortably better than the HTC One M9, a step up from the LG G4 and even the iPhone 6. It’s a proving to be a great alternative to the iPhone 6S as well if you don’t want to go with Apple’s smartphone.

So how do you pick between these two great Samsung phones and how do they differ?  Bottom line, it’s easier to talk about how they’re the same as the differences are slight, but they are there.

The two flagships are the most advanced and powerful phones on the market but the choice comes down to whether or not you love the innovative curved edges and can afford the premium.

We look at those differences in more detail below to help make sure you pick the right handset for you.

Oh, if you want to go bigger than the S6 and the S6 Edge, Samsung has now officially announced the Galaxy S6 Edge+ as well just to complicate matters.

Related: Samsung Galaxy S6 vs iPhone 6S: How will Apple take on Samsung?

In other words, if you’re worried that you’re making serious compromises to get the curved screen, worry not. You’re not losing out anything really serious here. But what do you gain from getting the S6 Edge? 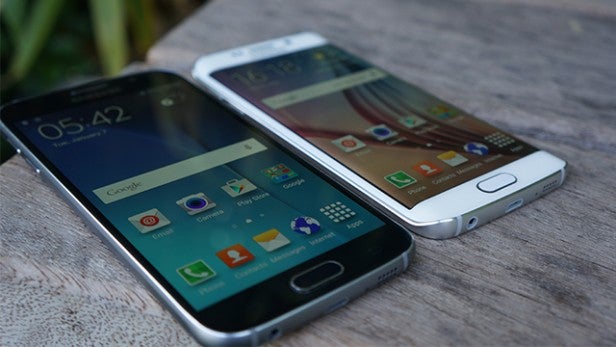 Samsung Galaxy S6 vs S6 Edge: The S6 Edge has a bigger battery

One of the key changes for the S6 is this is the first flagship Samsung phone that has a non-removable battery. This battery will last 12 hours of continuous web browsing on Wi-Fi according to Samsung, but its biggest trick is the fast charging. Ten-minutes of charging equates to about three to four hours of use and it can charge from 1% to full in about an hour and 20 minutes – faster than any other rival phone.

But because the SIM-tray on the Galaxy S6 Edge had to be placed at the top of the phone, Samsung managed to squeeze in a slightly larger capacity battery than the Galaxy S6 – 2,600mAh vs 2,550mAh. It shouldn’t make a huge difference, though, as it’s only 2% bigger. But in use, there did seem to be some slight disparity in battery performance. Approaching the end of a working day, the S6 Edge seemed to have about 10-20% more battery left.

3D gaming hits both devices pretty hard and will drop the battery by about 40% in three hours, but that will be closer to a 45% drop off if you’re using the non-Edge S6. 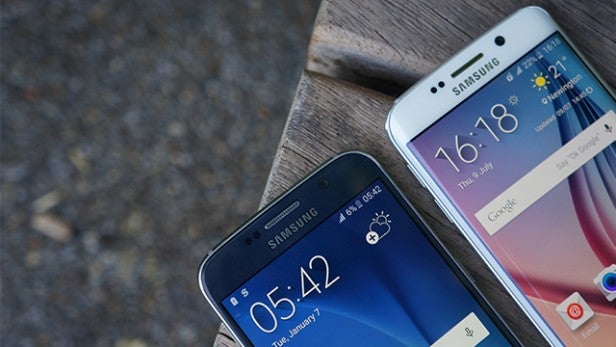 There isn’t a huge amount of difference in battery performance of these two phones, but the S6 Edge does have a fractionally larger battery and does appear to last a little longer than the standard S6.

Samsung Galaxy S6 vs S6 Edge: The S6 Edge is lighter, but thicker

Both phones are sporting Corning Gorilla Glass on the front and back and have metal rims. The S6 Edge is of course the most immediately eye-catching and will garner admiring glances and comments pretty much anywhere you go. Both phones also have protruding cameras, which is slightly less apparent on the Edge. The camera units only stick out by a couple of millimeters, so it isn’t a big issue. 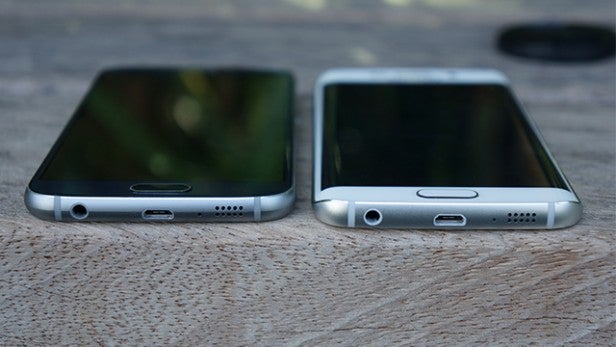 We have suffered from cracks and damage to the glass front and back, with it getting damaged from even the smallest of drops. These cracks have tended to grow too, so something that looks insignificant at first could turn into a large crack after a few weeks of use. These are beautiful phones, but a strong case might be in order if you’re on the clumsy side.

The S6 could be written off as an iPhone look-alike, but on closer inspection it’s much more attractive; even without the curved Edges.

The standard Galaxy S6 is more comfortable to hold because it’s contoured metal edges sit nicely in the palm of your hand. In contrast, the S6 Edge only offers thin metal to grip and the curve goes in the wrong direction for it it to be ergonomically satisfying. 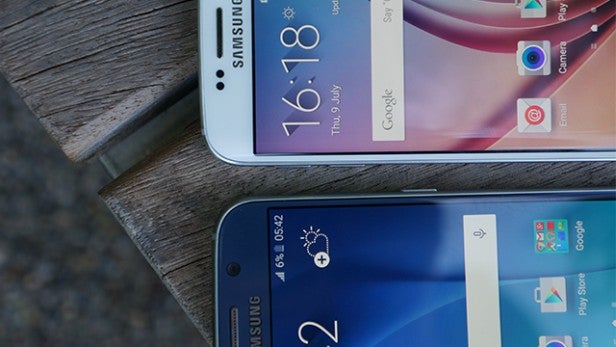 You may expect that the curved screen would make it easier to use one handed, but having used both phones, that doesn’t seem to be the case. While it may be easier to get your thumb across the side you’re holding it on, very few of us have thumbs long enough to reach the other side that curves downwards and away from you.

Another issue we had with the Edge variant was that it is too easy to touch the edges of the screen by accident whilst holding the phone, which renders intentional touches unregistered. It’s a niggle that may become quite frustrating over time as there is no way to 100% avoid accidently touching the screen when using the phone. 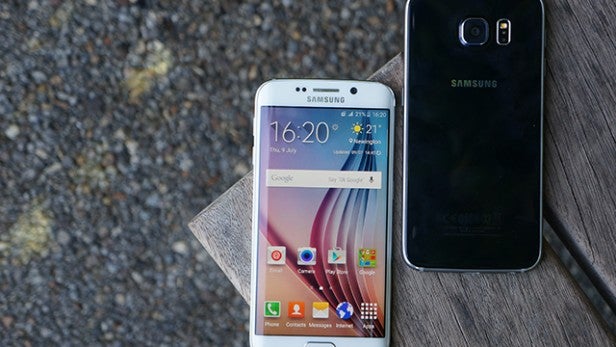 Views differ across the TR team, some love the look and feel of the curved S6 variant, but from a purely aesthetic point of view it’s a winner.

The difference in design shouldn’t have too great an impact on signal strength or performance, but we definitely had differing experiences when it came to testing these two phones. Using the standard S6, we found signal strength to be consistently strong, even underground when using EE Wireless Calling. We had initially found our S6 Edge to suffer from a number of dropped calls, but after a couple of weeks of usage we’ve found this not to be an issue and we haven’t had any further problems. 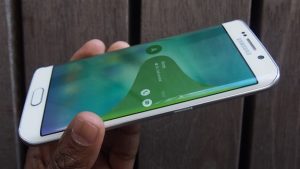 Samsung Galaxy S6 vs S6 Edge: About that curved screen…

Beyond its good looks, the curves of the S6 Edge provide some additional functionality, none of them are killer features but they do make the phone feel just that little bit more futuristic.

A few examples, however, are how the edge displays the time (see below) even when the phone is asleep – it’s very similar to the ‘glance’ feature seen on some Lumia smartphones.

Notifications and messages can be accessed from the edge using the new ‘People Edge’ mode. You can designate up to five contacts from your list to appear as one of five coloured lines on the edge of the home screen. Swiping across the screen from one of those lines brings up call/message history from those people, making it quick and easy to communicate with frequently used contacts. A white line at the top allows you to access your Edge Contacts at any time, saving you from having to find them in your contact list.

One of the smaller, but more intriguing, features is how you can set the edge to function as a notification light when the phone is faced down. It can also combine with the People Edge mode and be set to glow a specific colour when a particular person calls. This means you can work out who is calling when the phone is face down. If nothing else, it looks cool.

Related: Galaxy S6 Edge: What can the curved screen actually do? 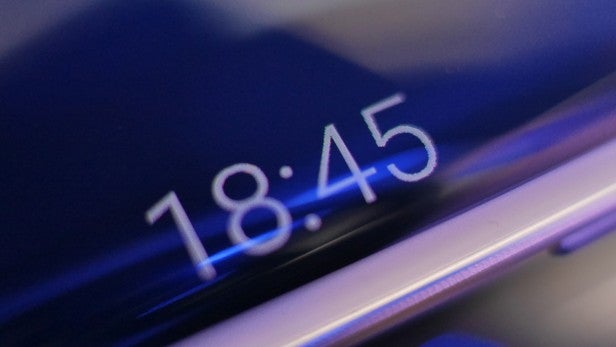 The edge can also double as a bedside clock with Night Clock mode. When the phone is in sleep mode, a quick swipe up and down will illuminate the edge. The night clock can only remain active for a maximum of 12 hours, but it will disable automatically if the phone’s battery hits 15%. While we used this frequently to begin with, it hasn’t really become part of our evening regime. It’s a little bit fiddly and we found we had to position our phone in a precise position on our bedside charger to utilise it and for it to charge. But, it’s probably the best use of the Edge display.

Are these additional features worth the extra money? If the price difference between both SIM-free 64GB versions were closer to £40, rather than £100, perhaps we’d be inclined to agree. But if you go for the S6 Edge you’re paying £100 for curved glass, a tiny bedside night clock, a contact/notification app and a glowing notification light when your phone is faced down. 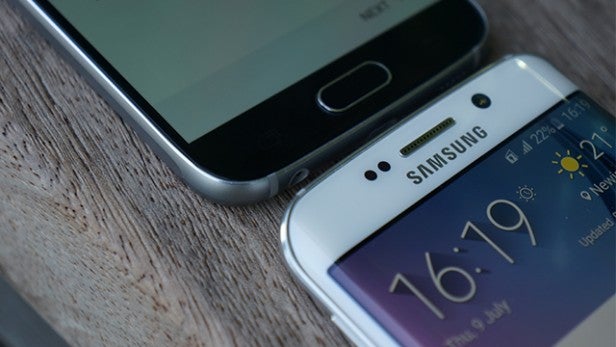 Both phones are currently shipping in 32GB, 64GB and 128GB sizes SIM-free and on contract. Neither has a built-in microSD card slot and each is available in White Pearl, Black Sapphire, Gold Platinum, but each also has an exclusive colour – Blue Topaz for the S6 and Green Emerald for the S6 Edge.

SIM-free, the Galaxy S6 (32GB) starts at £599.99 and the S6 Edge (64GB) can be purchased from £760. The S6 Edge is naturally more expensive and will be produced in more limited quantities because the curved screen is harder to manufacture.

As we noted above, the main appeal is simply the novelty factor and style that the edge display provides. It truly stands out in a crowd of phones that are becoming increasingly difficult to tell apart. How much you’re willing to pay for that difference, however, is entirely down to you. These are two of Samsug’s finest phones to date, and whichever you pick you’ll be getting a fantastic smartphone.

Do you prefer the S6 or the S6 Edge? Let us know in the comments section below.