The Samsung Galaxy S6 Edge is the fastest phone we’ve ever tested. It wasn’t very long ago that we said that of the HTC One M9, but the S6 Edge is significantly faster in benchmark tests.

Let’s have a look at the octa-core Exynos processor first.

For a long time now Samsung has used Qualcomm Snapdragon processors in its flagships, at least in the West. In Asia it’s been using its own-brand Exynos processors, which it’s now opted to put in the Galaxy S6 and S6 Edge. And it looks like the right decision.

The Exynos is a 64-bit processor, so some 64-bit compatible apps should see a modest performance boost. More importantly, and just like the 810, it uses ARM’s big.LITTLE configuration. This allows a ‘big’ quad-core CPU (2.1GHz) to be paired with a ‘little’, low-power quad-core (1.5GHz). Smaller tasks like browsing the web and listening to music use the little quad, which uses less juice. Intensive tasks, like 3D gaming, use the big quad.

Here’s how the processor performs in power saver mode and full power mode.

Even in power saving mode, the S6 Edge has a higher Geekbench 3 score than the HTC One M9 running at full speed. When it comes to 3DMark Ice Storm Unlimited test – a test that focuses on gaming performance – full power results are a lot closer, but even here the S6 Edge comes out on top.

What makes the Exynos 7420 special is that it uses a 14nm manufacturing process, like the latest Intel chips, that puts it ahead of the 20nm process used by Qualcomm on the Snapdragon 810. In layman’s terms, smaller manufacturing processes provide benefits to processing speeds and help reduce the use of battery power.

Not only is the Exynos 7420 super-fast, it also seems to run a lot cooler than the Snapdragon 810 on the HTC One M9 and LG G Flex 2. Even during a prolonged gaming session the Edge remains cool to touch, although battery drain rises significantly. 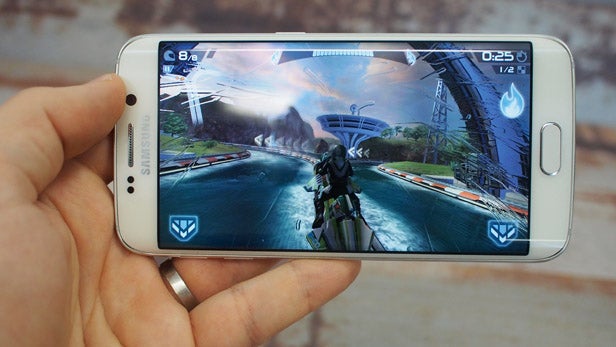 Gaming performance is top-notch with intensive games like Riptide 2 running like a dream. We didn’t experience a single dropped frame or stutter. The S6 Edge is a real powerhouse thanks to that beast of a processor. Samsung made the right move dropping Qualcomm’s effort.

We’ve already mentioned it a number of times, but it’s worth reiterating – the Galaxy S6 Edge does not have a microSD card slot. Instead Samsung has packed the entry-level Edge with 32GB of internal storage, rising up to 128GB for the top model. That’s more enough for most people, so the microSD card slot won’t be missed too much if you don’t mind splashing the cash on more pricey internal storage.

It’s still a bit of a slap in the face for Samsung fans who’ve always loved second-to-none functionality of Samsung Galaxy phones, and particularly for those who have bought 64 or 128GB cards they planned to use from flagship to flagship.

Aside from the microSD card slot, the Micro USB 3.0 connector has also gone. Introduced on the Galaxy S5, it allowed much faster transfer of data, but did have an effect on design. Micro USB 3 ports are a lot bigger than Micro USB 2.0, and it was really only a power-user feature. 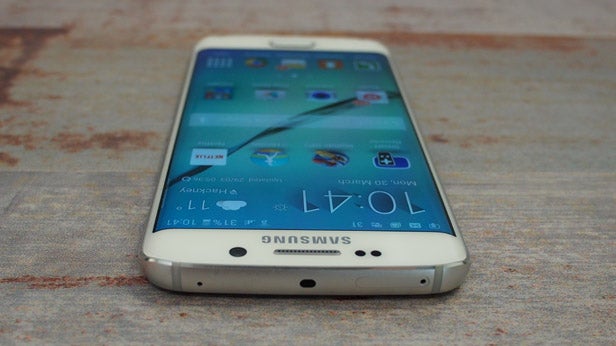 One feature Samsung has kept is an infrared blaster. It’s a small, tasteful oval located at the top of the S6 Edge and works with the bundled Peel app to let you control your home cinema system via your phone. You need a separate product sitting in your living room to do that with an iPhone.