Update 22/06/2015: The Sony Xperia Z3 has been with us for nine months, but it is still the formidable flagship we once knew? When it comes to the performance, our Z3 is still running power-hungry apps without issue, and the camera is as good as ever. The once-interminable battery life has dropped off a bit now though, so you’re looking at about one day’s use. Also, the Micro USB flap refuses to tuck in anymore – goodbye, waterproofing.

That said, the price has fallen significantly from when we first reviewed it. You can now purchase the Xperia Z3 brand new for around £360, which is a big drop from the original £525 tag. By contrast, you can currently get the iPhone 6 for £470, the LG G3 for £260, or the HTC One M8 for £305. The Xperia Z3 is pricy for an ailing Android smartphone, but it’s still a cheaper proposition than Apple’s latest handset.

Don’t forget that Sony runs a 6-month release cycle for its smartphones, so the Sony Xperia Z3+ has just launched here in the UK. That’s retailing over at Clove for £400 right now. If you’ve got a Z3, don’t bother upgrading, but those with older phones will want to consider the sequel if you’re looking for a new device – the price difference is a mere £40.

Here’s the bottom line: the Sony Xperia Z3 is still a great phone, but you can get the equally impressive LG G3 for £100 less. It’s also been superseded by the Z3+, so it’s not even Sony’s flagship anymore. It’s a good phone if you can bag one cheap on eBay, but we can’t recommend it as new.


Related: Sony Xperia Z5 vs Z4 vs Z3: What can you expect if you upgrade?

What is the Sony Xperia Z3?

Sony seems intent on sticking to its crazy-short phone refresh cycle, with the Xperia Z3 arriving just six months after its predecessor, the Xperia Z2. Sony’s latest Android-powered flagship, The Xperia Z3 lands alongside the Z3 Tablet Compact and the Xperia Z3 Compact, to complete the Z3 family. Given its speedy turnaround, the question is how much could Sony improve? The answer, not a great deal, it seems.

For looks, it’s not a radical departure from the Z2, though the body is svelter and lighter. Power’s been increased a little, there have been some improvements with the camera, and with an upgrade to Android 5.0 Lollipop it should prove to be even slicker still. The best news is that all of the things that made the Z2 so great, such as the superb screen, lengthy battery life and super-fast performance have all remained.

As you’d expect of a flagship, this is the best Sony phone yet, and despite the small improvements, the Xperia Z3 manages to keep pace with the HTC One M8, Samsung Galaxy S5, LG G3 and the iPhone 6. If you own an Xperia Z2, or even a Z1 though, you may be best served holding out for later this summer, when its successor, the Xperia Z4, is pencilled in to arrive.

There’s still the same combination of glass and aluminium with features like front-facing speakers and the camera sensor positioned at the back. At 7.3mm thick, it’s slimmer than the Z2 but not quite as svelte as the iPhone 6. It weighs 10g less than the Z2, not that you are really going to notice. What is more evident is the narrower frame, making it better suited for one-handed use.

It’s available in black, green, white and copper, the latter of which we had the pleasure of pulling out of our pocket. It’s actually not as garish or tacky as it first seems and is a colour that kind of grows on you.

The anodised aluminium finish has a very iPhone 6-look about it until you flip it over and see the glass rear. It might look nice, but it has irritating habit of slipping off sofa arms and pretty much any soft, not totally flat surface you leave it on. The S5’s dimpled back and even the all-metallic One M8 offers a more reassuring feel. 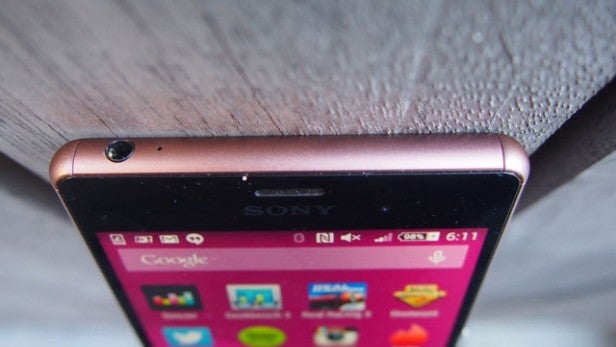 The corners are curvier, too, which ought to make it more comfortable to hold. It doesn’t. Why? Because on every edge you your hand rests there’s a button, a vanity seal or a charging dock. Buttons are at least well placed and thinner and while there’s nothing else out there like the Z3, we’d say the iPhone 6 and the One M8 have the more attractive, less fussy design.

One thing those two phones lack, however, is the Z3’s resistance to dust and water. Sony has moved up to a higher IP68 certification, which means as long as the latches covering the charging port and nano SIM card slot are closed, you can now dunk it into water for up to 1.5 metres for thirty minutes.

Those latches guarding the micro USB charging port, nano SIM and micro SD card slot feel more robust than the ones on previous Xperia Z handsets and should hopefully do a better job of keeping those vital internals protected. 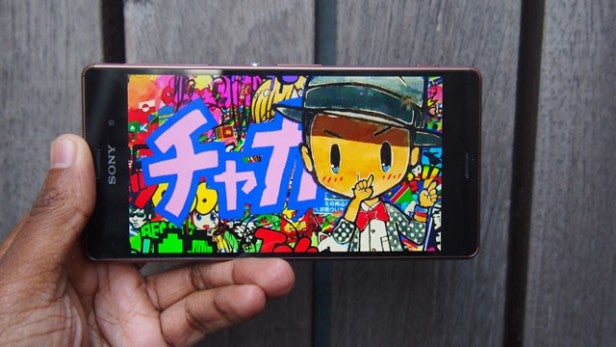 SEE ALSO: Sony Xperia Z3 vs Z2: Should you upgrade?

Sony hasn’t budged from the 5.2-inch IPS LCD scren from the Z2. That means 424 pixels per inch (ppi) and it is still one of the sharpest, most pleasing phone screens around. It’s also a bigger screen than the S5, the One M8 and the iPhone 6, although the G3 is still out in front with its 5.5-inch display. Some might be disappointed it’s not a 2K display like LG’s flagship, but this still a fantastic screen.

It’s not all entirely the same in terms of performance, either. One thing you instantly notice is how much brighter it is. Crank it up to the max and this is one of the brightest phones we’ve seen, especially compared to the S5 and the One M8. Coupled with the adaptive display mode where brightness is automatically adjusted depending on the environment, it’s well equipped for outdoor use.

The strategy to borrow screen technology from its Bravia TV range continues to pay off as well. Adopting Triluminous, X-Reality for Mobile and Live Colour LED display technology, images are still immensely sharp, with strong contrast and accurate colours. Unlike traditional LCD displays, Sony uses blue LED as opposed to white ones to produce the more colourful, vivid images. In the bright outdoors, you can actually see the blue LED array.

If there’s a criticism it’s that colours can look slightly oversaturated, but this can be addressed in the display settings. Adjust the white balance and  turn on or off the X-Reality for mobile and Super-vivid modes the image enhancement menu and you get slightly less overcooked colours.

Running a Full HD version of the Interstellar trailer on the Z3, the iPhone 6 and the Galaxy S5, the Z3 still holds up exceptionally well. Faces look natural, viewing angles are strong and whites are nice and bright. Where it lacks in comparison particularly to the S5’s AMOLED display is the deep blacks that make Samsung’s better suited for watching films. That minor gripe aside, this is still a top quality smartphone display.