TouchWiz on the Galaxy S6 Edge is slicker and simpler than ever before.

TouchWiz is a layer that Samsung adds to its Android phones to make them feel, well, a bit more Samsungy. It’s never been very good, though. Most people prefer stock Android, because it’s faster to use and contains fewer bundled apps (aka bloatware).

In the past TouchWiz has been annoyingly slow. The fractions of a second between pressing an icon and it doing something caused murderous frustration among those more used to the instantaneous response of other interfaces. But those dark days are well behind Samsung – the Galaxy S5 and Note 4 are quick and responsive phones too – and it has moved in the right direction again with TouchWiz on the Galaxy S6 Edge.

There are still plenty of bundled apps that you might, or might not, want to use. The initial hope that these can be uninstalled has been dashed, however – the best you can do is disable them, casting them into some sort of app limbo where they disappear from sight, but still clog up some of your storage.

Yet the impact isn’t horrific – 100MB or so. S Health, S Voice and S Planner are hardly heavy-duty storage hogs and neither is Peel Smart Remote, Microsoft Onenote, Skype, Kid Mode or any of the other 40 or so bundled apps. Still, we’d like Samsung to free up the S6 Edge’s 64 or 128GB to do with as we please – around 8GB of storage is taken up by Android, TouchWiz and bundled apps. The Nexus 6, which uses pure Android, uses just 6.7GB. 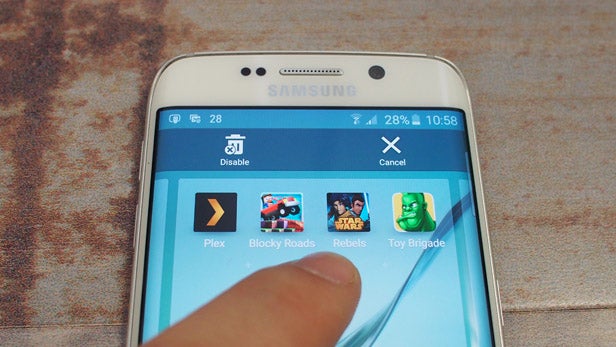 One major improvement Samsung has made is reducing the steps it takes to get things done on TouchWiz. It’s now easier than ever before. Removing or uninstalling apps is very simple and apps open quickly, powered by that monstrous octa-core Exynos processor.

The design has had a facelift, too. Text-only buttons make things clearer and less ambiguous and the whole system feels a little more contemporary. But is it better than HTC’s Sense 7 on the One M9 or iOS 8 on the iPhone 6? Not really. It still looks dated compared to stock Android 5.0’s Material design and overall it feels a little at odds with the beautiful exterior of the S6 Edge. But it’s a big step in the right direction

Now it’s time to dig a little deeper into some of the features that make the S6 Edge unique among Android phones – Samsung Pay and its fingerprint sensor.

Fingerprint Sensor
Okay a fingerprint sensor on an Android phone isn’t unique to the S6 and S6 Edge, but one as good as this is.

Where the Galaxy S5 and Galaxy Note 4 required a fiddly swipe down over the home button, the S6 Edge just needs you to rest a digit on it, just like Touch ID does on an iPhone. It’s a lot easier to use, even though Samsung improved its previous fingerprint scanners with multiple software updates.

Is it as good as Touch ID? Near enough as makes no odds. Touch ID is a fraction faster and, we still find, easier to use. That’s mostly because of the round shape and recessed nature of the home button on the iPhone 6, as opposed to any magical technological feat Apple has achieved. You can store up to four of your finger or thumb prints on the Galaxy S6 Edge, one less than on an iPhone, but four is plenty.

Being able to unlock your phone so easily is a great feature to have and the added layer of security it provides makes Samsung’s answer to Apple Pay possible.

Samsung Pay
When Samsung bought LoopPay a month or so ago, it wasn’t hard to figure out why. Apple Pay is another arrow in the quiver of Apple’s ecosystem – a way to pay using your iPhone or Apple Watch with a simple tap.

Both Apple and Samsung Pay let you store credit and store card details securely on your device and let you pay by placing a phone or smartwatch close to the credit card terminal. Both are secure and easy to use.

So why might Samsung Pay be better? While Apple Pay uses just NFC tap-and-pay, Samsung Pay uses a combination of NFC and LoopPay’s MST (Magnetic Secure Transmission). This means you can use the Galaxy S6 Edge in stores and countries that haven’t adopted NFC payment terminals. According to Samsung its service is compatible in 90% of US stores. Apple Pay? Just 10%.

We still need to see both these services in real-world action, though.

Flipboard
Samsung’s answer to HTC’s Blinkfeed is Flipboard. It aggregates all the news you’re interested in so you can browse it without having to go to specific websites. It’s slick and easy to set up and use, but lacks Blinkfeed’s ability to bring in Facebook, Twitter and other social media elements into your reading stream. 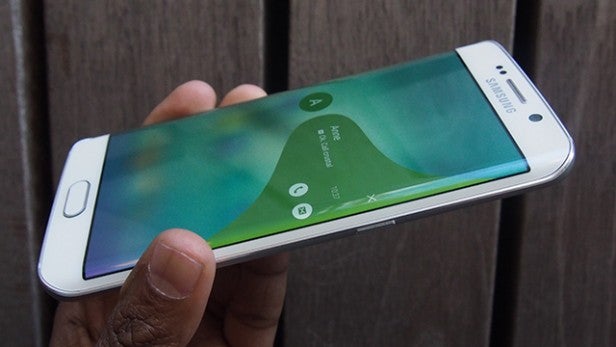 Edge Apps
The edge screen isn’t just for show. Actually it is, but it can do a few things, some niftier than others.

People Edge lets you assign up to five contacts to the edge of the screen to give you quick access, while Notifications and Information Stream let you see, you’ve guessed it, latest notifications and information.

For a full list of everything the edge screen can do, read Samsung Galaxy S6 Edge: What can the curved screen do?