Samsung will also update the S6 to Android 7.0 Nougat in the coming months, giving your phone a new lease of life. Considering it still has a great screen and camera, there’s still a lot to like about this phone. Read on for our original full review.

What is the Samsung Galaxy S6?

One of the finest phones of the year, we recently gave the Samsung Galaxy S6 – and its curvier S6 Edge cousin – the Trusted Reviews Smartphone of the Year award.

Thanks to a more affordable price, the S6 is still one of the best Android phones you can buy right now. It’s got a sharp screen, stunning camera, slick build and it’s a lot more compact than most other similarly specced phones on the market.

If the S6 Edge+ is simply too big for you and you’re not keen on going over to IOS with the iPhone 6S, the Galaxy S6 is a great choice.

Samsung has managed to make the Galaxy S6 a great-looking phone. The Galaxy S6 Edge is arguably the more stylish of the two, but you only need to spend more for it if you really want to. Smooth Gorilla Glass 4 front and rear, and aluminium alloy bands on the sides, means looks and feels like flagship phone. Unlike last year’s S5, the S6 feels like it’s worth over £500/$684.99. That’s important. 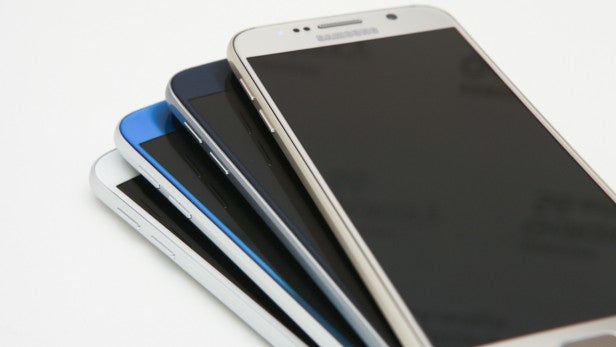 Less successful are some of the colour options, though. The “jewel tones” – as Samsung calls them – include White Pearl, Gold Platinum, Black Sapphire, Blue Topaz and Green Emerald. The brighter colours also tend to be fingerprint magnets so keep a spare cloth handy if you opt for one of those.

Some finishes have a slight dual tonality to them, so they appear to change colour depending on how the light shines on them. The effect is more subtle than the pink/gold combo on the HTC M9, but it can still look a little tacky, particularly in Blue Topaz and Gold Platinum. 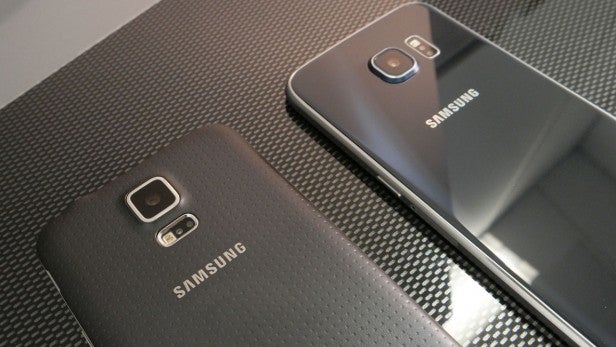 The phone is light but still feels solid, and it’s slimmer than the Galaxy S5. In fact, despite its large 5.1-inch screen, it doesn’t feel that much chunkier or clumsier than the dinky, 4-inch iPhone 5S. Thin metal volume and power keys live on opposite sides, which helps avoid accidentally pressing power key as we experienced with the HTC One M9.

One move that doesn’t work so well is the speaker placement. It now sits awkwardly at the base of the phone, rather than the back as it did on the Galaxy S5. Neither placement is particularly helpful, as they’re easy to block when held normally. This muffles the sound in the natural way you’d hold it while playing a game or watching a movie. Another issue is that the home key is slightly raised, making it easy to press accidentally while it’s in your pocket. 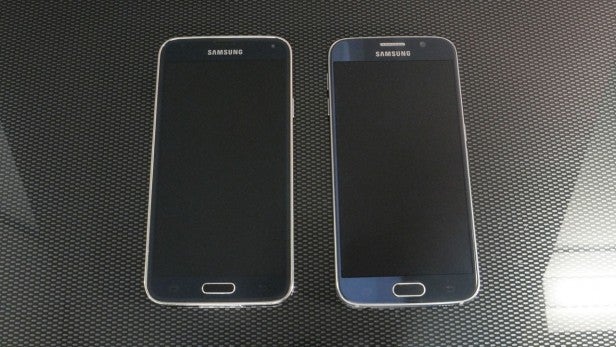 The S6 and S5 look very similar from the front

The rear of the phone is a less of a design success. The camera protrudes around 2mm making it look a little like a break-out on the face of an unfortunate teenager. Some people will be bothered less than others but the key point is that it slides in and out of your pocket easily thanks to sloped edges. The SIM-tray sits flush with the side and if you can keep hold of the annoyingly elusive SIM-ejector tool or use a paperclip, the tray pops out firmly without too much difficulty.

There are a couple more genuine drawbacks to the spanking new Galaxy S6’s design, though. Glass may be easy to grip but it’s so super smooth that the S6 dives off many surfaces like Michael Phelps at the first hint of a starting whistle – we’ve caught the S6 on the edge of possible destruction on numerous occasions during our time reviewing it.

Using a case or resting the phone on a textured surface reduces the frequency of these suicide dives, but a less slippery finish might have been better. It’s swings and roundabouts though. We prefer the look of the Glass-backed Galaxy S6 but felt safer with the S5’s grippy, dimpled back.

The S6 isn’t waterproof like the Galaxy S5, so you need to take more care than before. Mind you, we’ll be surprised if Samsung doesn’t release an IP-rated Galaxy S6 ‘Active‘ variant in the coming weeks or months.

The 5.1-inch screen on the Samsung Galaxy S6 is truly brilliant and definitely one of the best screens we’ve seen on a mobile phone. Only the LG G4 and Galaxy Note 4 can match it for sharpness, but the Super AMOLED panel on the S6 is cut above in every other respect.

Compared to most LCD-screened phones the Galaxy S6’s screen is more vibrant, though Full HD (1080p) screens look just as sharp unless you start looking at the screen from a couple of inches away. The S5’s screen is just as vibrant as the S6, but the S6 produces cleaner, more natural whites. Whites look slightly blue on the S5, while the S6 looks closer to the iPhone 6, which is the best in this department.

The S6 vs the S5 pixel density

But there’s no doubting which has the best contrast. AMOLED screens don’t have a traditional backlight, which means blacks appear perfectly black. This means videos and photos look fantastic, while the punchier colours outshine the iPhone 6 as well. It looks great indoors and holds up well even in direct sunlight.

Samsung’s TouchWiz UI allows you to adjust the display colours to fit the user’s preferences, and we found that the AMOLED Photo setting produced the most colour faithful results without heavily sacrificing vibrancy. Apple’s iPhone 6 is the benchmark for colour accuracy but the Galaxy S6 is closer to the iPhone than any other phone we’ve seen. 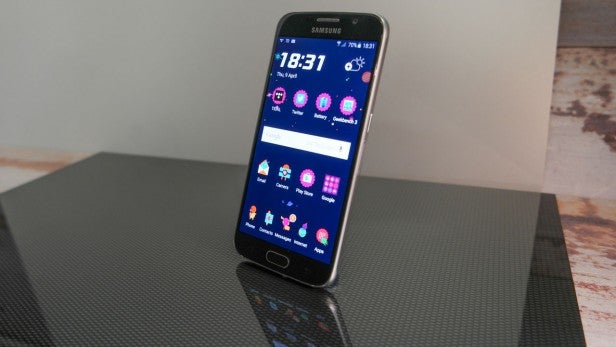 The screen looks good from every viewing angle, too, making it perfect for sharing videos and photos on. There really isn’t any department where this screen doesn’t excel. It’s brilliant.