The Samsung Galaxy S6 has a smaller battery than its predecessor – down from 2,800mAh to 2,550mAh. It’s also smaller than the battery in the S6 Edge by about 2% because Samsung used a slightly different circuit board structure in each phone. The SIM-tray on the S6 Edge had to be placed at the top of the phone, which allowed Samsung to include a slightly larger battery, but the difference is minimal.

In the mornings, the phone is off the charger by about 6am and then it’s used to check the news and weather, looking through social media feeds and getting transport updates. During a 45-minute morning commute to work the S6 is connected to public WiFi and is being used to read or for viewing media.

By the time I arrive at work, the battery can drop by as much as 20%. The battery depleted about 10% an hour when used actively, sharply declining during extended periods of game playing or video watching. 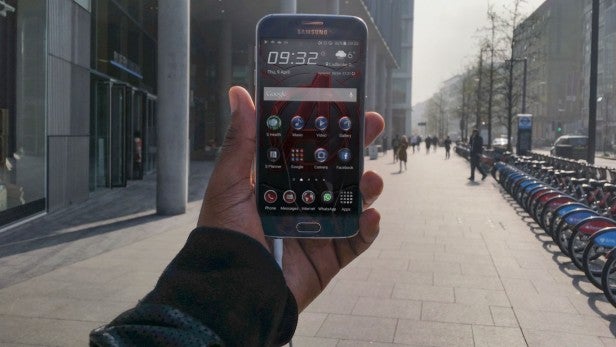 If you use the phone regularly and don’t take advantage of any power saving measures or actually activate one of the two power saving modes, it very hard to get a full day out of this phone. There’s no escaping that the S6’s battery life is inferior to the S5’s. Some people can manage with this, but if you’re a particularly heavy user then you might struggle to go a full day without a top up charge.

Used heavily, it often approaches critical by 8pm. Moreover, if you have a very early start. you’ll need both the power saving modes, or a top up charge, to make it home. But one of the phone’s other superb features really goes someway to negating its reduced staying power, and that’s the fast charging. 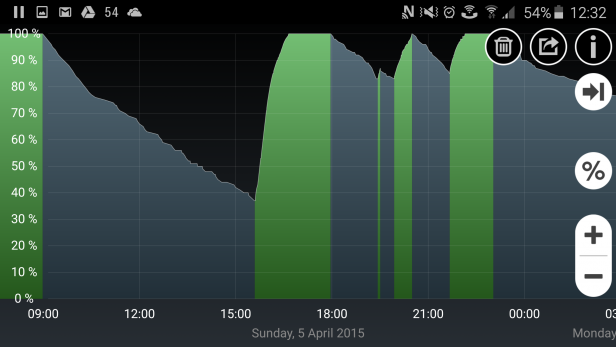 The steep peaks show how rapidly the phone charges, but you can also see how steadily and fast the battery can deplete

The Galaxy S6 charges exceedingly fast. When used with a compatible fast charger (one is supplied in the box), the S6 can charge up to around 35% in 10/15 minutes. That will give you about three-to-four hours of juice, which is really impressive. From 0% the phone will reach 100% in about an hour and 20 minutes – much faster than any of its competitors.

It’s unfortunate that the phone is so power hungry, especially given that Samsung no longer allows you to switch out batteries and is using a relatively average capacity cell in the Galaxy S6. Used sensibly most people won’t have issues with the battery, but people could rightly ask what good is it having bells and whistles of the most advanced phone on the market if you have to take them off? 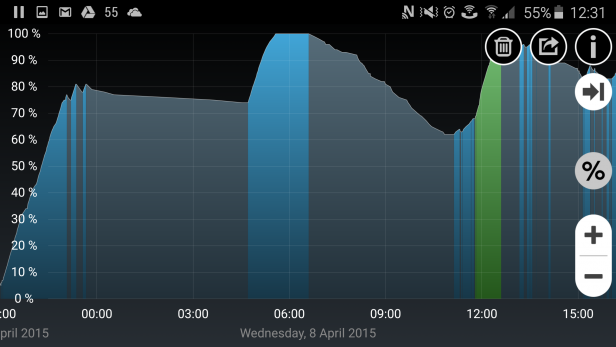 This graph shows the wireless charging performance, it’s much slower

The Galaxy S6 can charge wirelessly as well, which is part of the reason why the battery is no longer removable. Samsung has partnered with furniture giants Ikea to a release a range of home and office ware that has wireless charging spots built into them to compliment this new feature. While we don’t have any snazzy electromagnetic furniture, we did get one of Samsung’s own branded wireless chargers made for the Galaxy S6.

It’s a stylish looking round pad, with a ring of rubber in its centre to try and keep the slippery S6 in place, but it doesn’t fast charge the phone – wireless charging technology isn’t that good yet. The charging efficiency is sluggish in comparison to using the supplied charger. Two hours of wireless charging will get the S6 to about 70% from critical. 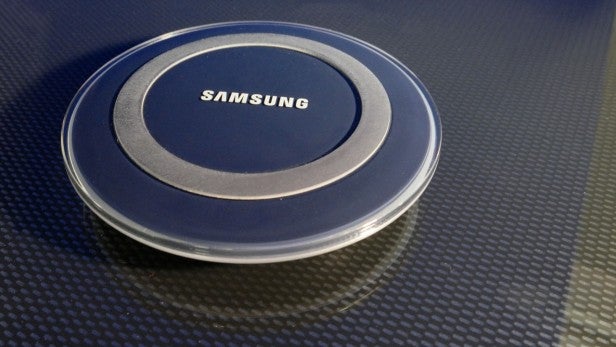 The wireless charger can be purchased for around £39.99 and is best used as a battery maintenance accessory, left on your desk at home or at work. It allows you to use the phone freely while being productive and keeps it charging steadily throughout the day. This also helps you avoid having to revert to power saving modes if you are sat at a desk and out of your house for more than 10 to 12 hours a day.

The battery is probably the only weakness of the Galaxy S6 and for some it may prove to be its achilles heel. But fast charging and the wireless charging capabilities go far enough to make the battery less of an issue, even if it’s a disappointing step backward compared to the Galaxy S5.