Who should I vote for in the UK General Election 2017? If you’re still not quite sure which box to tick today, there’s no end of online tools claiming to help you decide whether to back Theresa May’s Tories, Jeremy Corbyn’s Labour, or take a punt on the Lib Dems or Greens. Are any of them actually any good, though? We put them to the test.

The 2017 UK General Election is here, with millions set to turn out to cast their vote in one of the most important political contests in recent history.

When Theresa May first called the snap election, the consensus was she would inherit an increased majority, winning a landslide electoral victory against Labour and strengthening her Brexit mandate.

But, after many Tory gaffes, polls are now suggesting anything from a ‘strong and stable’ finish for May, and a distinctly weak and wobbly hung parliament where no party wins an outright majority.

In between, there has been an avalanche of stories, both positive and negative, about the candidates and their parties – from Diane ‘Abacus’ Abbott’s botching of the costs of hiring new police, to Theresa May’s apparent fondness for frolicing through wheat fields.

All of this information can easily lead to confusion, especially for first-time voters. The internet and the ease with which it can spread fake news and misinformation is now a known phenomenon; but then again, the internet can be your friend as you work out who you should vote for.

Here are the best ways you can tame the web to help you cut through the spin, based on our experience.

Related: How to vote in the 2017 UK General Election

Who should I vote for? Take a quiz

Who even reads a manifesto these days? Politics nerds, that’s who. But some are even geeky enough to digest manifesto content and turn that information into an interactive quiz.

With question on this election’s key themes such as security, the NHS, Brexit, and immigration, these quizzes will take your answers and show you the most compatible match to you. Sort of like the most disappointing online dating site ever.

Of all the options, we most rate ISideWith and WhoShouldYouVoteFor. Here’s why.

ISideWith has a brilliantly detailed, and generally accurate, quiz you can take to help you work out your political orientation.

Each question comes with a wealth of optional information, which is perfect if your knowledge is a little light on a particular subject area. If you need some assistance, above each question are relevant statistics and news items relating to that subject.

Also, each of your answers are weighted. Feel more passionate about reinstating fox hunting than you do about the national minimum wage? Then you can set weight your answer as ‘most’ rather than ‘least’ important to you, which will make a difference to your results.

It isn’t too long and allows you to add caveats to your answers, rather than only allowing you to give a binary yes/no response.

For me, as a left-of-centre Remain voter, I found my results very accurate with Labour my best match (of the parties I can vote for) with 87%, and UKIP and the Conservatives lagging behind on 39% and 37%, respectively.

Other members of the TrustedReviews team also found their overally results reliable, if a little bit confusing in places – is it really possible to agree with Labour, the Greens, and UKIP on immigration?

Related: General Election results 2017 – what time is the winner announced? 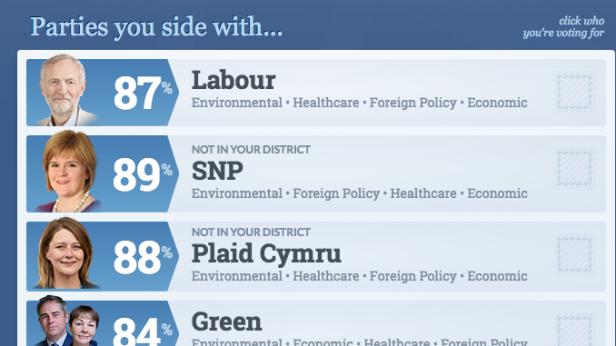 At WhoShouldYouVoteFor.com, we have an even simpler, shorter quiz that can help you decide who you should consider voting for — you could even do it while waiting for a bus or if you’re in a short queue.

This version has naturally been updated to take into account of the refreshed 2017 manifestos, but your results will only take into account those of the Lib Dems, Labour, and the Conservatives. So, if you have the time to spare, you’ll get more from the ISideWith quiz.

The trade-off is that you cannot weight your answers in terms of how important each issue is to you, so your results might be a little less accurate in comparison to ISideWith.

What’s great about these quizzes is that they help you to cut through the noise of constant political campaigning and spin. It’s meant to be about policies, not personalities after all. Which is why it’s a tad annoying to see questions about the personalities of each leader in this quiz, too.

How seriously you take these quizzes will depend on your level of political acumen, and we’d always recommend listening to your conscience over the internet. They’re a good bit of fun and might strengthen your convictions if you think you’ve made your mind up, but there’s ultimate no substitute for good ol’ gut instinct. 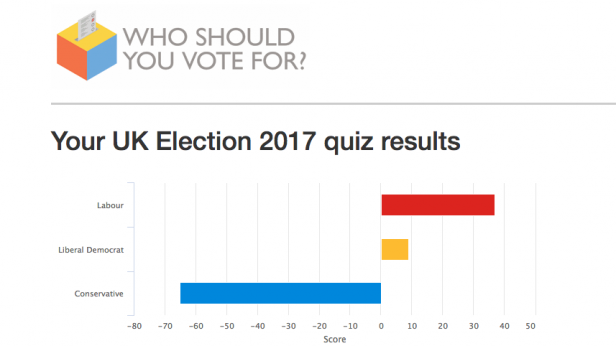 Tactical voting is where a voter is prepared to vote for a different party in order to prevent an undesirable outcome. So if you’re a staunch Lib Dem, but Labour have the biggest chance of beating the Tories in your area, prepare to hold your nose.

In this case, Tories need not apply: Tactical voting in the UK General Election 2017 is designed to resist a Conservative landslide win on June 8.

There are a range of online tools out there that help those who just can’t resist an underdog. All you need to do is search for your constituency — usually by postcode — and the system will recommend the best party to give your ballot box support if you’re not exactly Team May.

If your quiz results haven’t swung it for you, but you know you’re anti-Tory, then the tactical voting helper you should check out is Tactical2017.

What started life as a ridiculously-detailed spreadsheet has now been turned into a remarkably handy tool if you’re thinking of voting tactically.

With data stretching back to 2010, including by-elections, local elections, and local information, a nice and simple UI tells you the best non-Tory party to opt for, plus the reason why they’re the biggest threat to the Conservatives.

The site not exactly shy about their mission either, imploring voters to “put party loyalties to one side and focus on the bigger picture.” Which is to say, to “kick the Tories out of government.”

Related: What Brexit has meant for tech prices

The flaws of ‘who I should vote for?’ websites

The internet can both mislead and inform, so it’s great to see sites and tool that can help you decide how to make your voice heard.

But, it’s important to note the weaknesses inherent to such methods. The longer, more detailed quizzes are useful, but any quiz contains questions the compiler feels are most relevant – we can’t see the myriad systems and algorithms that give you your answer, and they could ultimately be biased.

If every quiz you take says a similar thing about you, maybe it’s worth giving that party some thought when your pencil hovers over your voting slip, but as we’ve already mentioned, you should take what you get back with a pinch of salt.

If you want to really dig into the stats and voting history of your local constituency, you can do so via Electoral Calculus, which might just confirm who you’ll be voting for in the UK General Election 2017.

Have these tools helped you to decide who you will be voting for on June 8? Let us know in the comments below.