Still an excellent phone with a great camera, lovely design and a fantastic display. It's not the Samsung flagship anymore, but don't let that put you off.

What is the Samsung Galaxy S8?

Samsung’s 2017 flagship is still an absolute looker and there’s still plenty of gas in the tank if you’re considering it as your next device, even though the Samsung Galaxy S10 is now available and packing a whole load more features.

Nothing comes close to the Galaxy S8 design-wise. It’s the best-looking phone I’ve ever seen, leaving every other handset trailing in its wake.

The curved rear, as seen on the Galaxy S7, nestles perfectly in your palm, while the glass shimmers as the light hits it. The device is available in three colours – a dark black, bright silver and a grey with a blueish tinge – with no ugly white front plate in sight.

My review unit is the black option, and it’s properly black all over, with shiny sides that blend into the display. It feels like one complete piece, with the glass, screen and metal combining all together. 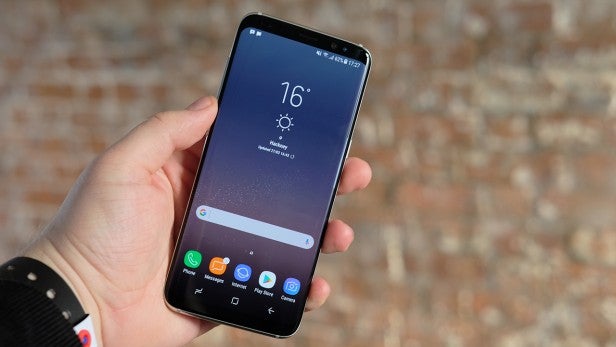 The volume rocker and standby switch are joined by a new button on the side. This is a dedicated Bixby button – which I’ll cover in more detail in the Software section – and while it shows Samsung is taking its new virtual assistant seriously, it feels too much for Bixby to have its own button.

The S8 is thin and incredibly light at 155g, but it feels sturdy and precisely made. The last time Samsung opted for a huge change of direction with its flagship, many of the basic features were lost in the transition. Thankfully, this isn’t the case here. A microSD slot continues to sit tucked away with the nano-SIM, the criminally underrated Qi wireless charging is also present, and the device is IP68 water- and dust-resistant too, so it will survive a dunk in water for 30 minutes to depths of 1.5 metres.

Samsung has also retained the headphone jack; I’d be very surprised to hear that anyone thinks that’s a bad idea. Apple’s decision to remove a physical headphone connection looked like it might signal the demise of the 3.5mm jack, but Samsung has gone in the other direction, by including a pair of very good AKG wired buds in the box.

Like the recently launched LG G6, the front of the Samsung Galaxy S8 is almost all screen – and it’s this that really makes the S8 stand out. Unlike with the G6, though, the display here melts into the sturdy metal rim. 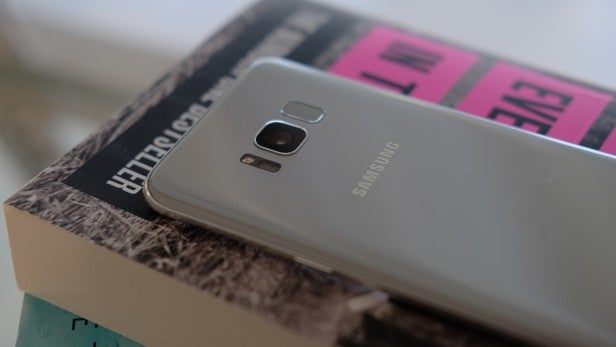 It’s a much subtler curve than on the Galaxy S7 Edge; far more like the ill-fated Galaxy Note 7 in fact, which makes it a lot easier to use. Accidental touches were common on older Edge phones, with your hand hitting the screen when you were just holding the device, but I haven’t experienced this with the S8. There’s still a bit of extra reflection on this portion of the screen, but it’s a small trade-off for such an eye-catching look.

As with any phone, though, not everything is perfect. Having such a big display and tiny bezel means there’s no room for the fingerprint-sensing Home button to sit on the front.

Instead, it’s on the back, next to the camera, and I hate it more every time I use it. First, it’s tiny, meaning those times I actually hit it, it doesn’t recognise my finger. But its real issue is the positioning; it’s so unintuitive. You have to wiggle your finger around the camera – which, incidentally, throws up a message on opening the app to remind you to clean dirty smudges of the lens – and guess where the scanner is?

I don’t understand why it isn’t at the centre, as it is every other phone that has a rear-mounted fingerprint scanner. I suspect Samsung wanted to build it into the display, but just ran out of time.

I’m also not convinced about how well this phone will hold up after months and years of use. The addition of Gorilla Glass 5 on both the front and back should offer a little more protection, but I’ve ended up with both a cracked Galaxy S6 and Galaxy S7 after drops onto carpet from barely 2ft high. Hopefully, things will be different with the Galaxy S8 – but it feels like a delicate phone. 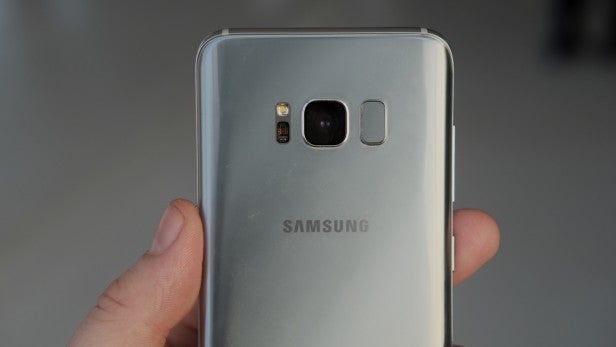 The strange position of the fingerprint scanner

The phone is also prone to showing fingerprints, but that’s par for the course with this amount of glass and shiny metal. I’d go with the Midnight Grey colour option if you’re really averse to smudges.

Not only has Samsung crafted what is, in my opinion, the best-looking phone out there, but it’s slapped on the finest display too. Although, when you consider that Samsung has demonstrated the best screen tech for a number of years, this isn’t really a surprise.

There’s more to the display than just the curves. First, it has a new aspect ratio of 18.5:9, rather than 16:9. This means it’s taller, essentially giving you more space in a body that isn’t that much bigger than that of the S7. While the Galaxy S7 had a 5.1-inch display, the S8 bumps that to 5.8.

It sounds huge, but the phone itself is compact and Samsung is keen to point out that it can still be used comfortably in one hand. I wouldn’t say that you can do quite ‘everything’ with one hand – especially reaching to pull down the notification tray – but this is far from a phablet.

The 5.8-inch display size is in some ways deceiving, however. Don’t pick up this phone thinking it will have the same size of screen as the Nexus 6P or HTC U Ultra in a much smaller body. This is a tall screen and it’s bigger than the S7, but it’s much narrower than proper phablets. Width-wise, it’s barely wider than an iPhone 7 and noticeably narrower than the Pixel XL. 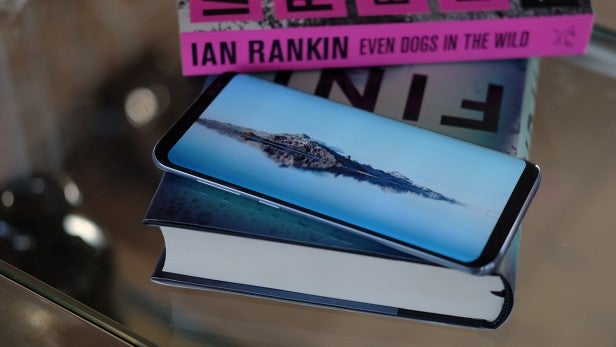 Like the majority of Samsung phones, the panel is AMOLED and has a slightly odd quad-HD+ 2960 x 1440 resolution. It’s also ‘Mobile HDR Premium’ certified, so you’ll be able to stream HDR (high dynamic range) shows from Amazon Prime and Netflix when those apps are updated. Arguably, HDR is the most important evolution in TV tech is recent years, offering better contrast and a brighter picture.

Colours are gloriously vivid, but it manages to avoid oversaturating brighter shades while still displaying the deepest black. Like the iPhone 7, it covers the DCI-P3 cinema-grade colour gamut for a much wider spectrum of colours, and in certain situations, the brightness can break the 1000-nit barrier. Considering most phones, including the LG G6, only go up to about 650 nits, this is seriously impressive stuff. In fact, this screen is so bright that I can keep it on 25% brightness and it’s perfectly visible indoors.

In a move that’s surely to try to stretch out the fairly small 3000mAh battery, when you unbox your Galaxy S8 it will be set to display at 1080p rather than quad-HD. Most people probably won’t notice the difference – and that’s fine. But I’d suggest hopping into Settings and switching things up. Downscaling can leave some apps with oddly big fonts and a softer look on texts and icons; considering you’re spending £600/$700+ on a phone, you’ll probably want it to look its best.

The Samsung Galaxy S8 is the best phone out there for media binging, and I’ve started picking it up instead of my iPad when I want to watch something on the go. There’s a clever mode called ‘Video Enhancer’, which boosts the contrast and brightness in certain apps – Netflix, Prime Video, YouTube and so on – to give a pseudo-HDR effect. I wouldn’t recommend keeping it on all the time, due to the increased battery drain, but it does make a fantastic display even better.