The Galaxy Note 4 is getting a bit long in the tooth in mobile terms, but that don’t think that means it not worth buying especially at less than £400/$500 without a contract. That is a lot of phone for the money and in some ways plenty of people will prefer it to the newer Galaxy Note 5, a phone that’s not actually available in the UK.

The newer Note gives you a better camera and faster processor, but doesn’t have the removable battery or microUSB slot of the Galaxy Note 4. Both these features have been key to the Note 4’s success so we’re not quite sure why Samsung chose to omit them in its latest phone. We wish it hadn’t.

If you want inspiration for your next handset however, then check out our Best Smartphones 2016 round-up, alternatively read on for the full Samsung Galaxy Note 4 review.

What is the Samsung Galaxy Note 4?

The Galaxy Note 4 is Samsung’s phablet follow-up to the Note 3. The Note really isn’t cheap at launch. If you buy it directly from Samsung it will cost you an eye-watering £629 SIM-free, but you can find it for less if you shop around. These days it costs a lot less.

You get a lot for that price, though. A ‘2K’ QHD screen, speedy Snapdragon 805 processor, fast charging and a new, improved S-Pen stylus all come as part an parcel. It also features a new premium metal design.

Thankfully Samsung has also listened to the moans of displeasure at the copious amounts of bloatware it packs on its handsets, and has significantly cut down on its own, often overwhelming, bundled apps.

The Galaxy Note 4 is one of those big phones that grows on you the more you use it. There are slicker phones around, but there’s a whole lot to like about this giant. With an update to Android 5.0 Lollipop on the horizon, things can only get better for the Note 4, but it’s facing ever stiffer big-phone competition from the iPhone 6S Plus and the Google Nexus 6P.

The Galaxy Note 4 is a big phone and big phones pose some handling issues. The Note 4, much like the Note 3, actually doesn’t feel too ridiculous to use in one hand or to hold up to the ear to take a call. But it doesn’t mask its stature as well as the LG G3 or LG G4, but even for our smallish hands it didn’t take long to adjust.

Compared to the Note 3, it’s taller, thicker and heavier, but the key difference is that it’s not as wide. It’s not by a great deal but this does slightly reduce the area you need to stretch fingers across to reach the other end of the virtual keyboard. You will want to type holding it in two hands, but it’s not a pain to use it in one hand either. Samsung does include a one-handed operation mode to shrink the screen size, which should help those who are really struggling.

Inevitably comparisons are going to be made with the iPhone 6 Plus and having had the big iPhone to compare, the Apple smartphone is taller and wider but slimmer than the Note 4. The curved sides on the Apple make it slightly nicer to grip, but both designs have their good and bad points. 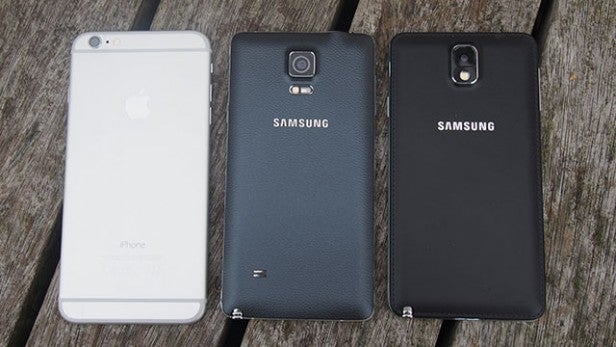 iPhone 6 Plus, Note 4 and Note 3 compared

When you peer into the Note 4 box for the first time, you could easily mistake the Note 4 for the Note 3. It has the same sized screen and the bezel around the display is virtually identical, although the decision’s been made to use a slightly lighter shade of grey. Take it out of the box and it doesn’t take long to notice the new design elements – and some of the old ones that we’re still not the greatest fans of.

The first change is the new aluminium metal trim that has a darker, cooler shade than the one on the Galaxy Alpha. The metal-look plastic trim was one of the naffest features on the Note 3 and thankfully it’s gone. The lighter silver finish on the Alpha is nicer, in our opinion, but on the whole this is a step in the right direction for Samsung. The corners on the trim are slightly raised, which is barely noticeable and doesn’t really have an impact when holding the Note 4.

Around the back is that thin, leather-effect plastic, now thankfully without the horrible fake stitching and a little softer to the touch. It’s nice to grip and fits in with the more sophisticated, business-like design approach of the Note 4, but it’s still a bit tacky. Compared to the all-metal One M8 or the iPhone 6 Plus, it simply doesn’t ooze class in the same way. It’s a big step up from previous Note handsets, but it also serves as a reminder of the design inconsistencies across the Samsung handset range. We’d have preferred to see the softer-touch back finish on the Alpha, which is more comfortable to hold. 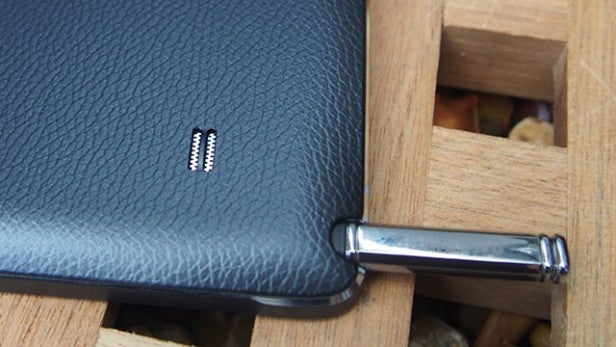 The back is still removable and here you’ll find the microSD card compartment, along with a removable 3220mAh battery and Micro SIM slot. Slip the cover back on and you’ll notice a small speaker, repositioned from the bottom edge, along with the protruding 16-megapixel camera sensor, single LED flash and a heart-rate sensor.

Flip the phone over to its front and the big change here is the new curved glass display. It’s the type of screen technology we’ve seen on Nokia Lumia smartphones and aims to promote stronger viewing angles. What it also means is that because it doesn’t lie flat against the metal trim, it creates a small gap that can be a magnet for the dust and muck from inside your pocket. It’s not the ridiculously sized gap that some people have reported it as, though. The earpiece above the screen has shrunk a little and it’s very evident that there’s a larger 3.7-megapixel camera sensor now included for better-quality video calling and selfies.

There are some features you’ll miss from the Note 3 and the S5. The Note 4 isn’t waterproof, although the lack of a dedicated camera shutter button would have made it tough to take photos submerged anyway. Samsung will no doubt suggest Note users don’t want waterproof phones, but we’d rather have the feature than not.

The micro USB 3.0 charging port is gone, just as it is on the Galaxy Alpha. The Note 3 was one of the first phones to support the new faster data-transfer technology, which increases the rate of recharging. If there was a Samsung phone where the technology made sense, it was the Note, so it’s strange to see Samsung has dropped it.

Elsewhere, the better-looking volume rocker, standby button and headphone jack are all in the same place, as is the home button, which also supports fingerprint recognition. We found the biometric sensor far more responsive than it is on the S5.

The S Pen is still hidden away in a compartment at the bottom of the handset, where it sits securely and shows no signs of falling out. The S Pen uses the same ribbed plastic and shiny silver top 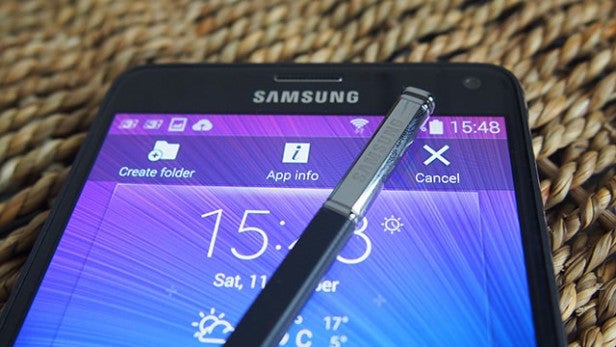 The Note 4 sticks to the same 5.7-inch screen, but it’s the resolution where things have changed. Following the lead of the LG G3 and the Oppo Find 7, Samsung has moved from a Full HD 1080p resolution display to a much sharper 1400 x 2560-pixel QHD (Quad HD) display. That means it has four times the pixels as a 720p HD display like you’d find on a Moto G for instance.

Samsung still uses a PenTile Super AMOLED panel to deliver the punchy colours and excellent black levels, making it a great canvas for video and reading. The pixel count is 515ppi, which is less than the 534ppi on the G3, but it’s still more than the 432ppi on the Galaxy S5.

One key benefit is that you gain the ability to view multiple apps on the same screen, which will come in handy for the Note 4’s Multi Window feature. There are some disadvantages, too, such as the impact on battery life with the extra processing power needed to deal with the higher resolution.

Most will probably not appreciate what the higher pixel density adds, but there’s no doubting that this screen is super sharp. It’s more noticeable when running video, but web pages are exceptionally crisp as well. 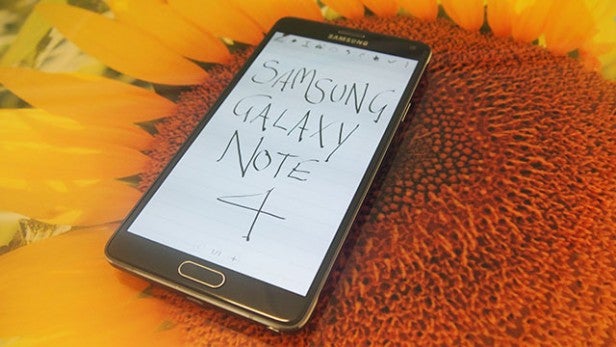 There are, of course, other qualities that make a good screen and the Note 4 does well on those fronts as well. It’s much brighter than the Note 3 and on par with the iPhone 6 Plus, making it useful for night-time use and offering great visibility in the bright outdoors.

It’s colourful, too – perhaps too colourful out of the box, so you might want to dip into the Display options in the Settings menu to make adjustments. Samsung includes Adaptive, AMOLED Cinema, AMOLED Photo and Basic display modes. The Adaptive and Basic modes help to mute the erratic colours and high contrast for a more balanced experience.

Video watching is where it really impresses, though. Whites are exceptionally white, blacks are gorgeously deep, and bigger is generally better when it comes to viewing pleasure.

Lying on top of that curved Super AMOLED Quad HD display is Corning Gorilla Glass 3 to add some extra durability and protection, which is almost a necessity for a big screen like the one on the Note 4. It also uses a Wacom digitized layer to sense the difference in pressure when using the S-Pen to help create an experience closer to writing on a piece of paper.