What is the iPad Air?

The iPad Air is a totally redesigned tablet. Apple has decided to rebuild the world’s most famous tablet to try to keep it well ahead of the competition. In many ways it has succeeded. The iPad Air is slim, light and superbly crafted. A turbo-charged version of the the brilliant 64-bit Apple A7 processor found on the iPhone 5S provides the grunt and, even though the screen is the same resolution as on previous models it is better than ever before. It’s the weight and lack thereof that’s the real star here, though.

Lame as Apple’s “Power of lightness is” tagline is it does seem apt. The iPad Air is much lighter than the iPad 4, in fact it’s lighter than most other tablets in its class at 469g. It has shed almost 200g, or 29%, of the weight that the iPad 4 carried. That’s a massive generational leap. 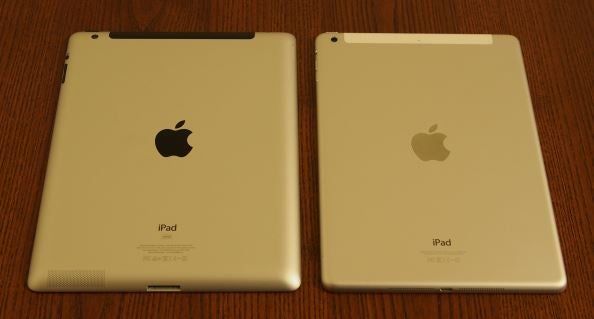 iPad 3 on the left next to the iPad Air

Unsuprisingly the weight is the first thing you’ll notice when picking it up. It really makes a big difference when using the iPad Air for long periods of time. The iPad Air is perfectly balanced which means you can hold it to read or watch a movie for hours simply by cupping a corner in your palm. Attempt the same with an iPad 4 and you’ll quickly succumb to shaky arm fatigue.

The look and design are taken straight from the iPad mini 2’s drawer. A tough aluminium shell encases the entire back and sides of the iPad Air, unless you opt for a 4G model which has a small plastic panel at the top to house the antennas. The edges where the screen meets the aluminium are diamond cut, providing a sleek, shiny surface.

While the iPad 4 also has an aluminium shell, the iPad Air’s is grippier and the sides rounder – both useful for keeping a comfortable hold of it.

The plastic buttons on the previous iPads were slightly at odds with the otherwise high-quality design aesthetic. Thankfully, Apple has replaced them with the metal equivalents found on the iPad mini 2. It’s a small touch, but the metal buttons add to the premium feel of the Air.

It’s not just the weight that has been reduced. The iPad Air is also much thinner and narrower than the iPad 4, while keeping the same screen size. At just 7.5mm thin it really shouldn’t feel as solid as it does, only the Sony Xperia Tablet Z is thinner at this screen size, but that tablet suffers from it by feeling a little flexible.

The screen bezels have also slimmed down significantly, which makes the iPad Air 16mm narrower than before. Slim bezels are sometimes a mixed blessing. Yes, they make the tablet more compact, but an accidental thumb on a corner of the screen can hit a link or cause the screen to be inoperable. We’ve experienced it plenty of times on other tablets and phones, but the iPad Air’s screen is designed to ignore an errant thumb and we haven’t experienced a single issue with it. 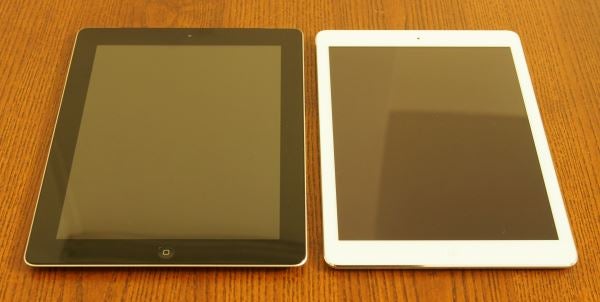 The iPad Air is one of the most comfortable and premium 10-inch tablets
we’ve ever used, but a great screen is just as important for a good user
experience.

On paper the iPad Air’s Retina screen is the same as the one on the iPad 4. It has a 2,048 x 1,536 IPS panel offering 264 PPI (pixels per inch) with scratch-proof and oleophobic protective glass that’s resistant, though not impervious, to greasy fingerprints.

If there was one thing the iPad Air could take from the previous versions without getting too much stick it’s the screen, but Apple has made some subtle improvements to it nonetheless.

Look at the screen straight on and the colours on the iPad 4 and iPad Air match almost exactly. Tilt the screen, however, and you’ll notice that the Air maintains its excellent colour accuracy at impressive angles. Text is also more legible from acute angles.

The screen on the iPad 4 is good, but we did find that it have a slight pinkish tinge to white backgrounds, particularly noticeable when browsing the net. The iPad Air has clearly been given a dose of Vanish and manages to provide cleaner whites. Turn the brightness up to eleven and the screen is noticeably brighter, too.

The 4:3 aspect ratio on the iPad Air is one we prefer on a tablet this size. It makes it easier to browse the internet, but you do get bigger black bars when watching a film than you would on a 16:9 or 16:10 tablet like the Samsung Galaxy Tab S 10.5. It’s one of those trade-offs you just have to live with, but we can’t think of a good reason for Apple to change this aspect.

It’s the best screen on a 10-inch tablet, only the Nexus 10 even comes close, but if there’s one thing we’d like Apple to improve it is the reflectiveness. Use it outdoors on a sunny day and you’ll find yourself looking for the best angle to minimise the mirror effect. The brightness means you can still see what’s happening on-screen but an anti-reflective coating would improve matters. 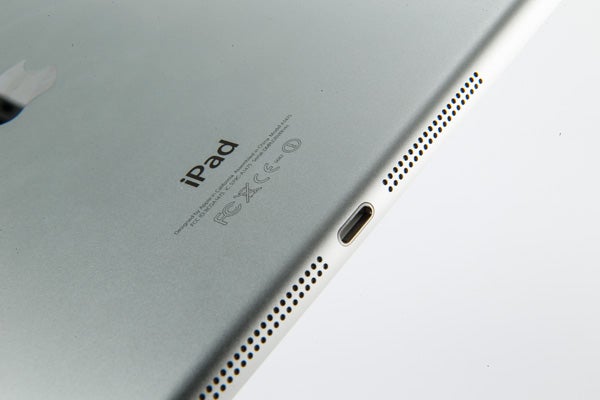 Stereo speakers come as standard on the iPad Air. It’s a step up from the mono speaker on the iPad 4 and brings it in line with the iPad mini. Unfortunately the stereo effect isn’t that impressive, primarily because both drivers are located next to each other at the bottom of the tablet, something the Nexus 7 and Kindle Fire HDX 8.9 avoid by placing speakers at either end when held in landscape.

The compact size of the iPad Air means we shouldn’t expect greatness from the speakers, but they are very good for a tablet. Audio is crisp and clear and doesn’t suffer from the tinny treble that affected dialogue on previous iPads. The speakers also offer a mite more bass, which means voices are deeper and more accurately portrayed.

They’re acceptably loud too, enough so that you can happily watch a film in quiet company, although, as with any tablet, you’ll want a separate speaker set-up to listen to music. One issue is the fact that the speakers face backwards, directing sound away from your ears. Cup a palm behind the speakers and the sound bouces back loud and clear. We’re sure the speakers face backwards for aesthetic reasons but HTC managed to integrate good-looking forward facing speakers onto the HTC One M8 and we’d like to see a similar set up on the iPad Air.

So it looks great, sounds good and the display is solid, but how does it perform day to day?