To make the iPad Air so thin and light Apple has reduced the size of the battery, but still claims 10 hours of constant use. We’ve already mentioned how the M7 processor helps improve battery life, but the A7 SoC is also more efficient.

The 10-hour battery life bears out in real world tests. At around 70% screen brightness we managed to get just over 9 hours of mixed use including 30 minutes of gaming, two hours of streaming video, word processing, Skype video chatting and browsing the internet (over Wi-Fi and for an hour on 4G).

In our standard benchmark tests the iPad Air lost just 2% battery life for a 30-minute 720p movie streamed over Wi-Fi. Over 4G the same video took 6% of the battery. The Air also managed to gain a respectable 0 to 15% (or about two hours worth) of battery life from a 30-minute charge.

Space grey on the left and silver on the right. The screen bezels are black and white respectively

Should I buy the iPad Air?

The iPad Air is the best jack-of-all 10-inch tablets, but at £400 for the most basic version it is a little pricey. If you primarily want a tablet as a productivity tool, or as a laptop replacement, then you could opt for the weightier Microsoft Surface Pro 2. However, prices start at £719 and you’ll need to fork out extra for Office and the keyboard cover. The Surface 2 starts at £359 and you get Office RT bundled, but the Microsoft Store is very limited by comparison, and the tablet is 50% heavier than the iPad, with a less impressive screen.

Only the Nexus 10 comes close to matching the iPad Air’s screen on a 10-inch tablet, but the app experience on large Android tablets leaves a lot to be desired and

There is a variety of options when picking which iPad Air to buy. It comes in two colours – space grey and silver. You then have the option of Wi-Fi only or Wi-Fi with 4G/LTE. For an extra £100 the latter lets you add mobile internet to your iPad and it’s one of the features that most iPad buyers most regret not opting for.

If you’re going to keep the iPad Air at home then Wi-Fi will be adequate, but if you want to use it on the go then you should consider 4G. Remember, though, that you will need a subscription with a mobile network. EE charges £15.99 a month for 2GB of 4G internet. A third option is to tether to a 4G phone, though that adds a few compilations: you need a tethering compatible phone and contract and it will drain your phone’s battery faster.

The Air also comes in four storage sizes 16GB, 32GB, 64GB and 128GB. If you opt for 4G you can afford to go for less storage options and use iCloud and other cloud platforms to store and stream your files, but if you like to keep a decent selection of music, video and games on-board you should consider the 32GB model, at the very least. 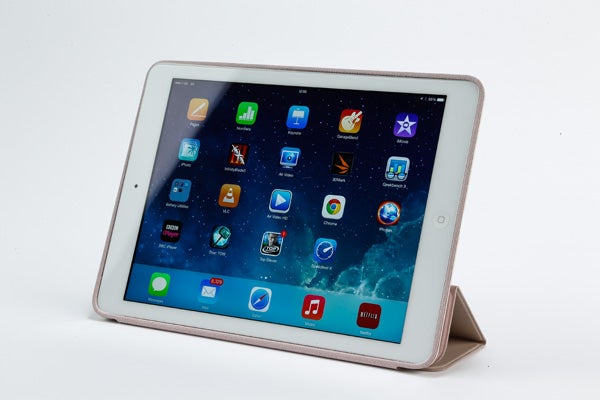 Apple sells two types of covers for the iPad Air: the Smart Case for £65 and Smart Cover for £35. Both are leather and fold around to provide a perch for the iPad to stand upright, but we found the Smart Case to be a little unsteady and prone to flattening. We recommend the cheaper Smart Cover that protects your screen but leaves the tough back exposed, or that buyers opt for a keyboard case, which transforms the iPad into a great productivity tool for its diminutive size. We’ll be looking at the cases, and possible iPad keyboards, in more depth in a separate feature.

The iPad Air is the best overall 10-inch tablet you can buy by quite a margin. The huge weight reduction makes the larger of the two iPads a far more attractive option again, while retaining all the iPads traditional strengths such as its unrivalled collection of tablet optimised apps. A revolution it isn’t, but we find it very hard to see how Apple can top this version now.

Next, read our guide to the best iOS 7 tips and tricks