When Apple announced the performance increase the A7 processor gave the iPhone 5S we were a little sceptical. It didn’t take long, though, to find out how special the dual-core CPU/quad-core GPU SoC (System on Chip) is. It also goes to show, once again, that clock speeds and the number of cores aren’t the be-all and end-all of real world performance.

The iPad Air shares the same processor with Apple’s flagship phone, albeit with a slight bump in clock speed. While the 5S runs at 1.3GHz the Air runs at 1.39GHz. It can achieve this because of the increased space and improved heat dissipation of the Air compared to the much smaller iPhone 5S.

Indeed, before we go into the detail about performance it’s worth noting that the iPad Air manages to keep its cool with consummate ease. Even when running intensive 3D games and apps for hours it barely breaks a sweat and, therefore, neither do your hands.

In practice, the iPad Air is blisteringly fast. Apps open instantly and games like Infinity Blade 3 look sumptuous and run smoothly. The benefits of having a SoC means that the GPU can be used to tackle compute tasks, which makes video editing and compute intensive apps, like AutoCAD, show no hint of slowdown. 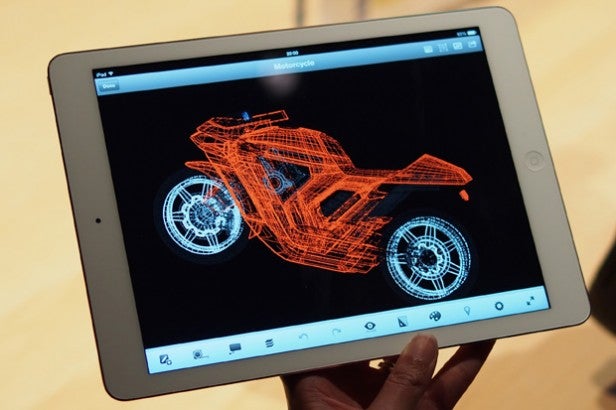 This is born out with our benchmarking tests. The iPad Air performs 59% faster than the iPad 4 in the 3D Mark Ice Storm Unlimited CPU and GPU test and 91% faster in Geekbench 3 tests. The Peacekeeper browser test, which assesses web browsing performance, shows that the Air trounces its predecessor by being more than twice as fast. It’s also faster than the stonking Snapdragon 800 processor on the likes of the Sony Xperia Z Ultra and Google Nexus 5. We’re talking matter of degrees here, but the difference is there all the same.

There has been a lot of talk surrounding Apple’s move to a 64-bit processor. If you want to know more about the implications read our A7 guide here. Suffice it to say the biggest wins become apparent when the software is also 64-bit, so it will take a little time for the full benefits to appear on the iPad Air. Apple has helped by re-engineering some of its key iOS apps to take advantage of 64-bit computing. This includes the iWorks and iLife suite of apps we’ll cover a little later, but it’s probably more significant for games and ‘pro’ applications like AutoCAD, the latter being the kind of apps that 99% of iPad owners don’t deal with. 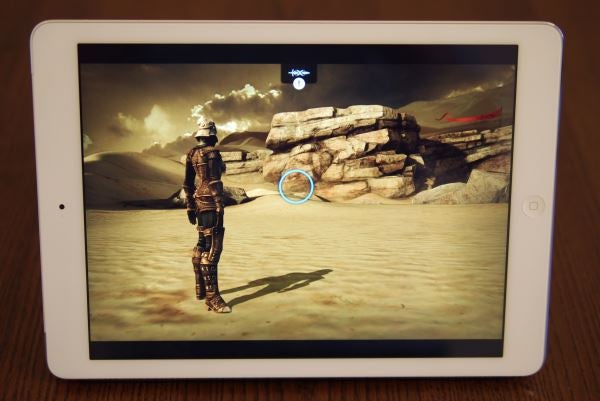 Infinity Blade 3 on the iPad Air

One reason the A7 was made 64-bit was so that the iTouch fingerprint scanner on the iPhone 5S could work smoothly. Sadly, iTouch is omitted from the iPad Air. It would have been a great addition, but it’s less of an issue on a tablet, which doesn’t require unlocking as often as a phone and where inputting passwords is less fiddly thanks to the larger keyboard. This doesn’t totally excuse the omission, of course, but judging by the iPhone 5S delays (reportedly caused by iTouch) it’s probably just as well Apple didn’t include it.

Aside from the A7 there’s another, much smaller processor called the M7. This has one job only, to manage the iPad’s motion data. It improves battery efficiency by being much more low powered and is particularly effective for the 4G models. For example, if the iPad Air isn’t receiving 4G signal in a specific location it will stop looking. When the iPad is on the move again the M7 will notice and tell it to start searching for signal again. Being out of signal is a significant drain on battery life and this is a neat way of solving it without just throwing a bigger battery, and therefore more weight and bulk, at the problem.

There’s one thing that should always be remembered when discussing the 9.7-inch iPad – the App Store. There are more than 475,000 iPad optimised apps on there, some free, some paid for, but all designed for a screen bigger than that of a phone.

Android on 7-inch tablets like Nexus 7 2 isn’t quite the warty experience it is on bigger ones, but there is a stark contrast between using an iPad optimised app and using upscaled Android apps on a 10-inch tablet. The iPad provides a slicker and more optimised experience. The Windows Store, meanwhile, is still a little threadbare and lacking some top apps.

So the App Store is still the best in the business, but what about Apple’s new iOS 7?

iOS 7 is Apple’s biggest redesign of its mobile operating system since it first launched. It has had a mixed reception with detractors claiming it looks too childish and still lacks some of the best Android features. Whether or not you like the flatter, more colourful design, is a matter of taste. We think it’s a refreshing take and retains the instant accessibility that has made iOS so successful in the first place. The addition of an easy-access control centre that lets you have quick access to some core settings and the updated notification bar are welcome. 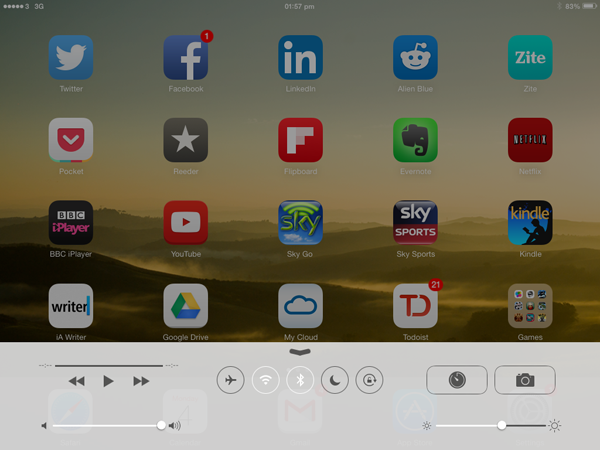 However, iOS 7 still lags well behind Android and Windows when it comes to customisation. Aside from the lack of widgets there is still no option to create user profiles – something both Android 4.3 and Windows do very well. If you want to protect your tablet so that your kids can use it without accessing inappropriate content or accidentally deleting your emails or apps you’ll need to look at other operating systems.

Where Apple gains some brownie points is with the reworked 64-bit iWork and iLife suite of apps. They now come absolutely free for anyone buying an iPad Air. iWork is Apple’s version of Office and comes with Pages – for documents, Numbers – for spread sheets and Keynote – for presentations.

Plenty of improvements have been made but perhaps the most interesting is that Apple has created a unified file format that means it’s easier than ever to work on documents across platforms. Following the footsteps of Google Docs you can now even share files with anyone, regardless of platform. It’s a great addition and means that Apple users can now collaborate easily with PC users.

Where iWork handles productivity, iLife covers creativity. iPhoto, as the name suggests, lets you tweak and manage your photos, as well as order print versions in bundled photo albums – a 20cm x 20cm book with 25 pages costs around £20. Because it’s been re-engineered in 64-bit it’s very fast, opening an album with hundreds of images is instant and means you don’t have to wait ages for the images to show up. iMovie lets you manage your videos while Garageband gets your creative juices flowing by making music in minutes.

Both iWork and iLife apps are made for the touch interface and really are easy to use, although not quite as powerful as their Microsoft Office counterparts.