What is the Nexus 7?

Following in the footsteps of the original Nexus 7, the tablet that brought Android to the masses, Google’s second-generation Nexus 7 has a lot to live up to. Google has now released its new lead tablet, the Nexus 9, though at £319 it’s not the market-defining bargain that the early Nexus models were.

The original Nexus 7 helped repair the damage done by the reams of rubbish Android tablets that came before it, finally making Google’s OS a serious player in the tablet market. It flew off the shelves, proving that people craved an affordable, pocketable tablet. Amazon soon followed suit, releasing its own small, cheap tablet, the Kindle Fire HD, and the revamped Kindle Fire HDX, while Apple responded with one of the most desirable 8-inch tablets on the market, the iPad mini.

So Google’s second-generation Nexus 7 has a lot to live up to, and there’s also a shedload of additional competition from the likes of the Tesco Hudl 2. With the same processor that powers the impressive Nexus 4, a Full HD screen and a claimed all-day battery life, can the faster, sleeker, more expensive Nexus 7 become as successful as its predecessor? It should do, as the new Nexus 7 offers one of the best Android tablet experiences out there.

The Nexus 7 has been on sale from more than a year now so we carefully read through more than 300 confirmed purchase user reviews from Reevoo to find out what Nexus 7 owners like and don’t like about the tablet.

In general the Nexus 7 scores very well for screen and performance, which tallies with our testing and long term experience with the tablet. Owners also like how much cheaper it is than the comparable iPad mini 2.

On the downside users complain about the lack of microSD card slot and the location of the power button – an issue we also regularly experience.

Average battery life seems to be one of the biggest complaints. It’s not terrible, it just doesn’t quite reach the levels other tablets do, including the previous version of the Nexus 7.

Not sure what to buy? Then read our Tablet Buying Guide

The original Nexus 7 was funtional rather than pretty, more worrying were the numerous quality control issues. Owners complained about creakiness, the screen separating from the back and general poor build quality.

Happily the Nexus 7 2 looks and feels sleek and makes its predecessor appear more dated than it truly is. Its silky soft-touch black plastic feels great in hand, while the thin hard plastic seam between the screen and the back is far less pronounced than psuedo-metallic join on the original.

The new Nexus 7 still doesn’t quite have the cache of the iPad mini’s aluminium back, but the plastic is far warmer and easier to keep hold of than the cool metal of its main rival, and is streets ahead of the shiny plastic Samsung favours. Its grippiness is particularly apparent when you rest the Nexus 7 2 on your lap, it seems to clutch at cloth where other tablets just slide off.

Surprisingly, the back isn’t the grease magnet we’ve come to expect from
previous experience with soft-touch plastic. It is remarkably resistant
to dirt and oil. 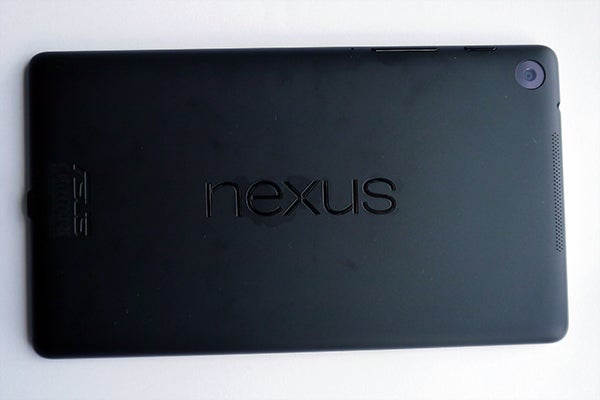 While the screen size hasn’t changed, the dimensions of the Nexus 7 have. It is a full 6mm narrower and almost 2mm thinner than before. It’s a little taller, but the height of a tablet doesn’t matter too much: it’s all about the width and thickness. And here it trumps most other tablets comfortably. It’s a considerable 20mm narrower than the iPad mini for example, which means the new Nexus 7 fits comfortably into a back pocket or inside a jacket and is easier to hold.

The change in size isn’t the only thing that’s made it a comfortable tablet. The Nexus 7 has been put on a strict diet and the 50g it has lost makes it far easier to use and handle for longer periods of time, particularly one-handed. The soft edges that run all the way around the Nexus 7 make it an ergonomic tablet, and are a welcome change from its sharp-edged predecessor. All good news if you want to use it for prolonged reading sessions.

There are a few design aspects that could have done with a little more refinement, however.

We always thought the power and volume rocker buttons on the original Nexus 7 are a bit too close together for comfort, making it easy to accidentally hit the power button when you’re actually aiming for the volume up. Asus seems to have taken note and moved them a little further apart, but not far enough by our reckoning. You still, invariably, end up hitting the wrong button and turning off the screen without wanting to.

These buttons are tucked away under the curve of the right hand edge of the screen. This has the benefit of ensuring they’re not accidentally triggered when you have the Nexus 7 resting on its side, when watching a movie for example. Unfortunately, it also means the buttons are rarely in an easily accessible position. It’s a minor issue, but one that annoys us regularly during use.

However, it’s the screen that can make or break a tablet and, on paper, the Nexus 7 has a corker.