What is the Google Nexus 10

Tired of cheap and nasty tablets undermining the Android platform, Google has decided to take matters into its own hands and created two Android tablets, the Google Nexus 10 we’ll be examining here, and the Nexus 7, that provide the same level of user experience and Apple owners have come to expect from the likes of the iPad 4.

The Nexus 10 may have Google’s branding but it is actually manufactured by Samsung, a company with a strong pedigree in Android phone and tablet manufacturing. It is the flagship model in Google’s Nexus range, and is
designed to show off Android in the most stylish way possible. To take on the might of Apple, and to ensure other Androind tablet manufacturers up their game, it’s the biggest and best-equipped Android tablet we’ve yet seen. The Nexus 10 is even
priced at around £100 less than its comparable iPad 4
model, that’s around 20% cheaper.

Packing a better-than-HD display, a high performance CPU and the latest Android version – 4.2 Jelly Bean, can the Google Nexus 10 end the iPad’s dominance? 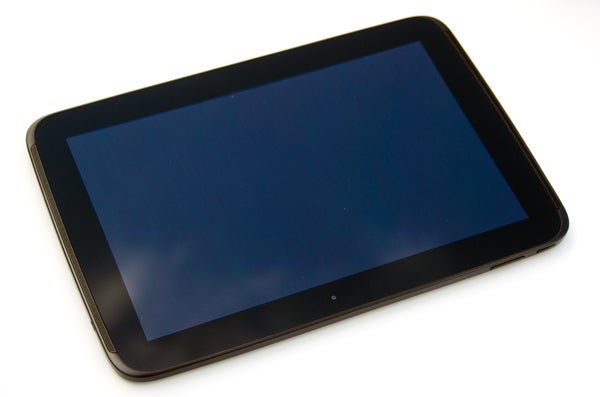 First impressions of the Nexus 10 are quite positive. Overall
build quality is very good, although some may find that the rubber
finish on the back doesn’t quite lend it the design kudos as its
metal bodied rivals. It still feels robust enough to be manhandled,
prodded and poked on a daily basis, but overall build quality isn’t
quite in the same class as the metal-bodied iPad 4 or Asus Transformer Pad Infinity.
It’s not all bad though because the rubber finish is extremely tactile
and offers excellent grip. On colder
days, it’s also warmer to hold.

Likewise,
while the Nexus 10 is rigid enough and doesn’t bend or flex should you
exert a bit of pressure on it – not that any sane person would actually
try and do this to their tablet. That said, prodding the back of the
tablet with a finger does reveal a millimetre or so of give in the
rubber, along with the odd audible creak. Again, this isn’t necessarily
something you’ll notice unless you purposely go looking for it. Perhaps
more of a concern for most users, assuming you haven’t bought a case to
go with it, is that the rubberised back is prone to picking up dirty
marks from greasy fingers, which can be slightly awkward to clean off. On
the plus side the rubberised back of the Nexus 10 is much less likely to
pick up scratches – something metal-backed tablets are much more prone
to. 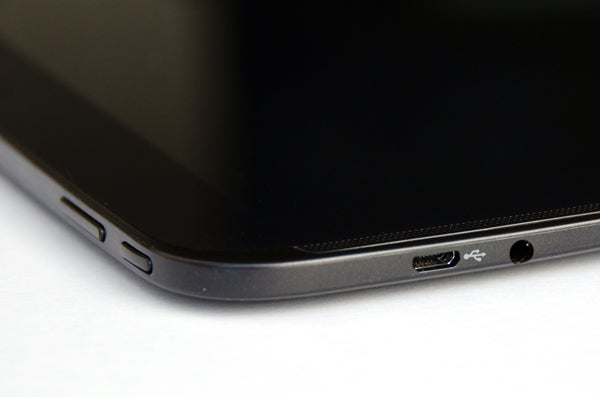 The front of the Nexus 10 is covered with a sheet of Corning
Gorilla Glass 2, thereby protecting the screen from accidental
scratches. You’re free to buy a screen protector of course, but in our
experience Corning Glass 2 is pretty tough stuff and renders this
somewhat unnecessary. A protective case is still a good investment if you
plan to be carrying your tablet inside a bag though. In use, not only
does the screen feel especially silky to the touch, it also appears to
have had some kind of oleophobic coating applied – even after a long
session of typing and swiping the screen on our review unit still
manages to look pretty clean. Not by any means spotless, but noticeably
cleaner than the screen on our Transformer Prime does after a similar amount of use.

Thanks to its curved sides, rounded corners and front-facing speakers that bookmark both sides of the screen the Nexus 10 does a pretty neat job of distinguishing itself from the myriad of Android tablets already on the market. There’s also quite a bit of symmetry between the Nexus 10 and its 7-inch stable mate, the Nexus 7. Indeed, it appears that Google has a few design principles it’s keen to extend across its Nexus range – or at least it’s Nexus tablet range – the tactile rubber finish and bold ‘Nexus’ branding being two areas where the Nexus 10 follows the lead of the Nexus 7 (the Nexus 4 with its glass-covered back does admittedly tread a different path in this respect). 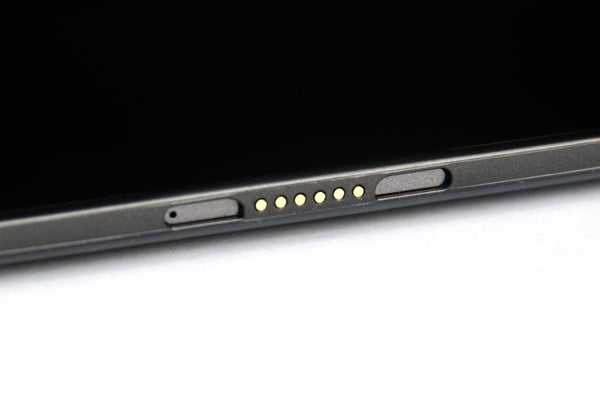 In terms of shape and size, the Nexus 10 is much more rectangular than the squarer iPad thanks to the 16:10 aspect ratio of its screen – something that’s common to all 10-inch Android tablets. Because of this the Nexus 10 is much more comfortable to hold and use in landscape orientation – held in portrait mode it feels a bit long and thin and isn’t nearly as comfortable to hold for extended periods of time. There’s no right or wrong with respect to shape, but ultimately the 4:3 aspect of the iPad is better suited to reading websites and eBooks in portrait mode, while the 16:10 aspect of the Nexus 10 is better suited to watching video content and playing games in landscape mode.

With regards to its Android tablet rivals perhaps the most distinguishing feature of the Nexus 10 is the shape of the bezel that surrounds the screen. Whereas the vast majority of Android tablets come with straight edges and relatively sharp corners, the Nexus 10’s sides are noticeably convex while the corners are much more rounded. It’s all down to individual taste, of course, and while some might contend that the bulging sides and softly rounded corners give the Nexus 10 a bit of a ‘toy tablet’ appearance, we actually rather like the fact that Google has opted to tread a slightly different path. 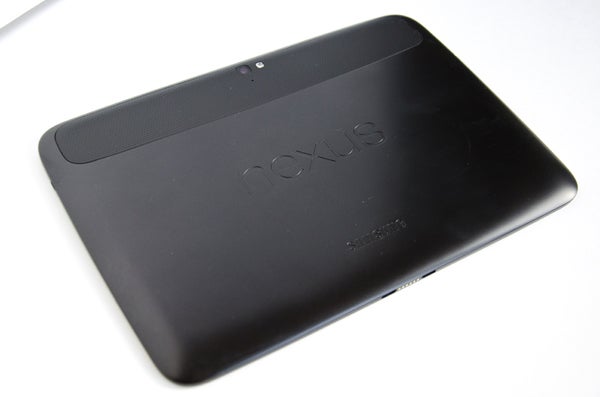 In any case, it’s worth noting that the Nexus 10’s curves don’t actually look as pronounced when the tablet is in your hands as they do in photographs of the tablet. Besides which, there are actually some practical benefits to the accentuated curves; when holding the Nexus 10 two-handed in landscape mode – as most users probably will be 95% of the time – the rounded edges sit really nicely in the palm of the hand, making the Nexus 10 more comfortable to hold than say, any of the current Asus Transformer range or indeed the iPad 4. At just 603g, the Nexus 10 is also 50g lighter than the iPad 4. This might not sound like much on paper, but in your hands the difference is noticeable.