Xbox One vs Xbox 360: Is it worth upgrading to the new generation?

The Xbox One has been around a for three years now and it’s well worth considering the upgrade from the Xbox 360 if you haven’t taken the plunge already. Microsoft has been steadily adding new features to its latest console and it now runs Windows 10, making it a jack of all trades, master of some.

Where, at one time, the Xbox 360 eclipsed the Xbox One when it came to multimedia capabilities the newer console is now the stronger.

What’s even more exciting is that Microsoft has announced a Xbox One S console at E3 2016. It fixes some of the issues with the original Xbox One, namely it hugeness, and adds a 4K Blu-ray player to the mix. That’s pretty impressive considering it will only cost £249 when it goes on sale in August 2016.

That wasn’t the only thing, Microsoft also teased a significantly more powerful Xbox One codenamed Project Scorpio that will arrive near the end of 2017. Should you wait for it? Well that is quite a long time away.

We’ll guide you through some of the key things to consider in this piece, before you decide to splash out on a shiny new Xbox.

Related: Xbox Scorpio: Everything you need to know

The Xbox One is a huge, hulking beast with a huge hulking power supply dragging it down. By comparison the Xbox 360 is dinky. 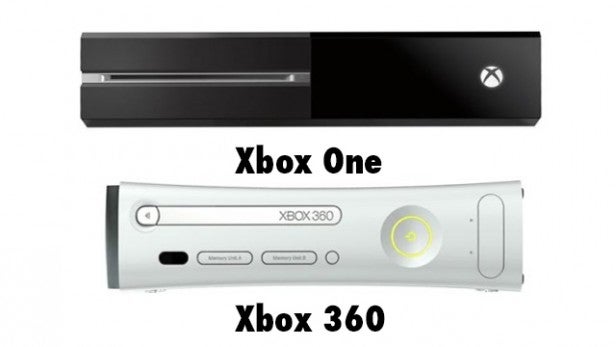 One of the reasons Microsoft has made the Xbox One so chunky is to give it room to breathe. The smaller Xbox 360 suffered from some well-documented overheating problems, which were partly to blame for the Red Ring of Death problems that cost Microsoft over a billion dollars. There’s no wonder why Microsoft has played it safe with the Xbox One. The Xbox One has been designed to be switched on for its whole anticipated 10-year life cycle and we haven’t heard of any major issues with it since it launched.

The chunky design all set to change with the svelte Xbox One S. The new Xbox is 40% smaller than the original and comes with an inbuilt power brick, which means it will fit in tighter spaces and can be stood upright. Nice. If you can, wait for it to be released in August before buying an Xbox One. 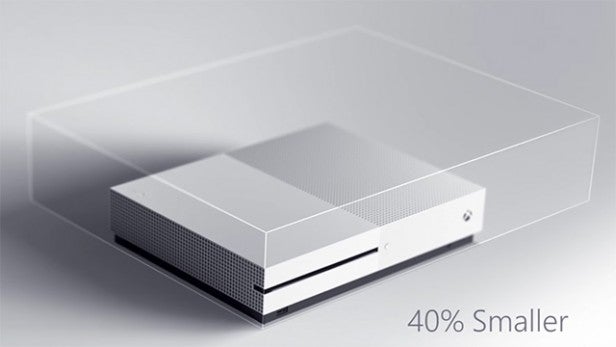 If you’re into voice commands or motion gaming features, you’ll also want to consider the Xbox One Kinect. Originally, it came pre-packaged with the Xbox One console itself, but now you can buy the console cheaper without it.

Of course, the Xbox One Kinect is far more advanced than the original, with better body recognition, wider field of vision for play in smaller spaces and enhanced voice commands. We would say that the Xbox One UI is far easier to navigate with Kinect, as often it can be tricky to find certain options or settings with the Wireless Controller alone.

The Kinect has dropped down Microsoft’s priority list for the Xbox, and rightly so with the advent of virtual reality headsets like the Oculus Rift and HTC Vive. These provide motion controls but add incredible immersion to the experience. 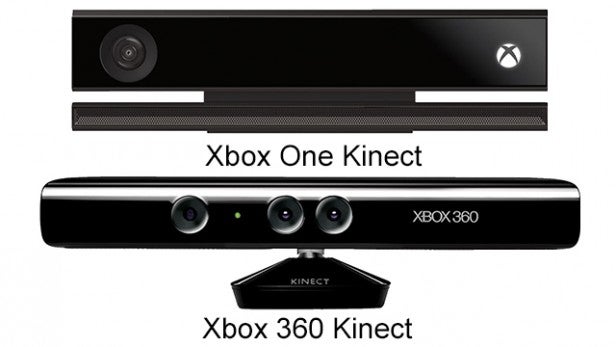 Although you might not think noise is an issue when choosing between the Xbox One and Xbox 360, it could be a consideration for those with older generation Xbox 360 consoles.

The Xbox One is nearly silent when it’s running, partly down to its size of course, because the more space the fans have, the less hard they need to work.

You might not notice a huge difference between the latest couple of Xbox 360 models though.

The Xbox 360 has a PowerPC-based CPU – it’s a triple-core 3.2GHz processor. The Xbox One has an eight-core processor based on the AMD Jaguar chip series.

Does that mean the Xbox One is two and a half times as powerful as the Xbox 360? No, it’s more powerful than that as the efficiency of the CPU is much better, not just the clock speed and number of cores.

The increase in RAM is even more marked. The Xbox 360 has 512MB of RAM, the Xbox One has a whopping 8GB of RAM.

Let’s put some performance numbers to it. The Xbox 360 has 0.24 TFLOPS ( a standard measure of computing performance) whereas the Xbox One has 1.23 TFLOPS. That’s a very big difference indeed. 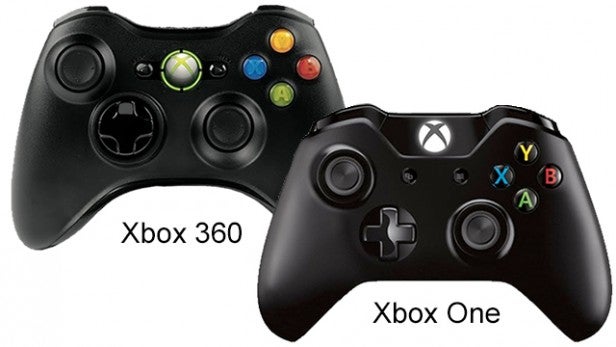 Xbox One vs Xbox 360 – Controllers

There isn’t a revolutionary change between the Xbox 360 and Xbox One controllers, but Microsoft made some iterative changes that makes the Xbox One Wireless Controller have the edge.

The biggest change is what Microsoft is calling the Impulse Triggers. The Xbox One Controller triggers now pack rumble motors. That makes the Xbox One the ultimate console for racing games, as you’ll feel anything from the subtle gear changes to the hard brakes with the left trigger right in your fingertips. It’s a great addition for shooters too, but when you’ve experienced racing games like Forza Horizon 2 with the Xbox One controller, it will feel fantastic.

The shoulder buttons have also been enlarged slightly, so there’s not that bizarre gap between R1/R2 and L1/L2 as there was on the Xbox 360 controller.

Sadly, the Xbox One Wireless Controller still runs on AA batteries as standard, with the rechargeable pack available as an optional extra.

If you want to splash the cash then there’s also the refined and customisable Xbox One Elite Controller to consider. 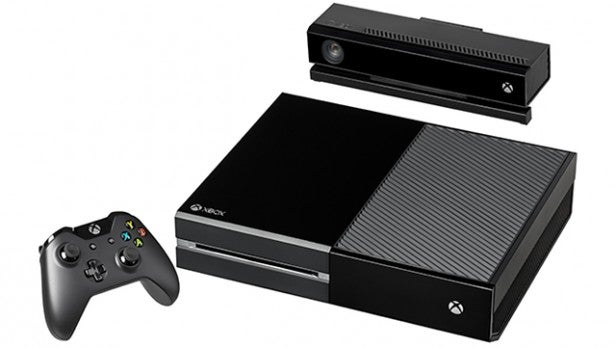 Because the Xbox 360 has been around for nearly a decade, it has a stellar array of games to it’s name. Plus, Microsoft believes its ageing console will be supported by developers for at least another two years yet, so it’s still worth investing in on a games front.

However, as the months roll on you can see the Xbox One’s game resolution and game library getting to be far stronger than its predecessors. You can’t deny that cross-platform games look far better in the 900p/1080p resolution of the Xbox One.

It’s getting to the point that developers like Ubisoft are creating two different games to take advantage of the power of the Xbox One and PS4.

At launch, the Xbox One didn’t have the strongest of exclusive game line-ups. It had the likes of: Assassin’s Creed 4: Black Flag, Crimson Dragon, Call of Duty: Ghosts, , Capcom’s Dead Rising 3, Microsoft Studios’ Forza Motorsport 5, Killer instinct and Ryse: Son of Rome. The majority of those were also available on Xbox 360.

But in the years since release, we’ve had some strong Xbox One titles such as Forza Horizon 2, the colourful Sunset Overdrive and Halo: The Master Chief Collection. Plus, you’ve got titles like Assassin’s Creed Unity that is only available on new-gen consoles.

Backwards compatibility is also now on the cards. More than 200 Xbox 360 games are now compatible with the Xbox One so you can play a lot of your old favourites on the newer console.

Xbox One vs Xbox 360 – Multimedia features

From launch and even before that, the Xbox One has been touted as the all-in-one entertainment console, and over the past few years, Microsoft has been working hard to fulfil that promise.

Originally, the Xbox 360 was miles ahead in terms of media skills, but the Xbox One has not only caught up on all fronts, it’s also surpassed the ageing console.

The Xbox One app line-up currently looks like this: Netflix, Amazon Prime Instant Video, BlinkBox Movies, Wuaki.tv, 4oD, Crackle, Demand 5, Eurosport, Machinima, Muzu TV, Now TV, TED, Twitch, and YouTube. With the Xbox One now running Windows 10 you can use pretty much any apps you want from the Windows Store. Impressive stuff.

Plus, the Xbox One has some other great features including the Xbox Media Player app (currently in preview) for watching content from a USB or external hard drive and Plex.

That means it’s definitely stronger the the Xbox 360 when it comes to enjoying media, especially as you can also plug in a USB 3.0 external hard drive of 250GB or above for additional storage on your Xbox One.

It doesn’t end there.

The Xbox One can draw in cable TV feeds from services like Virgin Media or Sky Q and integrate your TV content within the Xbox One UI. There’s even a rather special EPG called the OneGuide that will let you pause/rewind live TV up to 30 minutes, collate your favourite programmes and even see what shows are trending on Twitter.

Even if you don’t have a cable TV subscription, you can fork out an additional £24.99 for the Xbox One Digital TV Tuner to achieve the same results with Freeview and Freeview HD feeds.

See also: Plex on Xbox One – How to stream media from your PC to your console 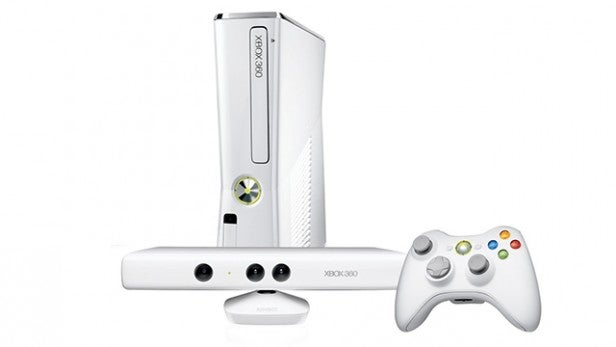 Despite several waves of Xbox One price cuts, the Xbox 360 is still considerably cheaper than it’s successor. You can pick up the low-end 4GB Xbox 360 for around £130, but we’d recommend opting for the more expensive 250GB option for around £170 brand new.

Verdict – Which console should you buy?

It’s very hard to make the case for the Xbox 360 any more, even if it is cheaper. It’s an old console that’s showing it’s age, while the Xbox One is going from strength to strength.

The Xbox One is the far better option but now may not be the best time to upgrade from Xbox 360. While the Xbox One is the ultimate entertainment console, the Xbox One S is a lot more compact, comes with a UHD Blu-ray player and will cost just a little more at £249.99. Keep saving until August and get yourself the newest version.

Next, read our Xbox One S vs Xbox One comparison

Share your thoughts on the Xbox One vs Xbox 360 debate in the comments below.