Available for Xbox One (tested) and Xbox 360

We apologise if the following reads like unmitigated hyperbole, but there’s just no getting around it: Forza Horizon 2 is one of the best racing games ever made. The original took an inspired idea – take the graphics and physics engines from Forza 4 and wrap a Need for Speed game around them – and actually managed to make it even better than that sounds. Forza Horizon 2 does the same with the guts of Forza 5, while grabbing nearly every good idea from nearly every great arcade racer ever.

There are elements here of the Burnout games, of Need for Speed: Hot Pursuit and even of the not always brilliant Test Drive: Unlimited 2. There’s also a free-wheeling exuberance to the game, as if the team at Playground Games have been handed the keys to Forza’s supercars, then left to go crazy on the open road. The results are pretty much irresistible.

Forza Horizon 2 isn’t just a great arcade racer – it sets a benchmark for a new generation of racing games. 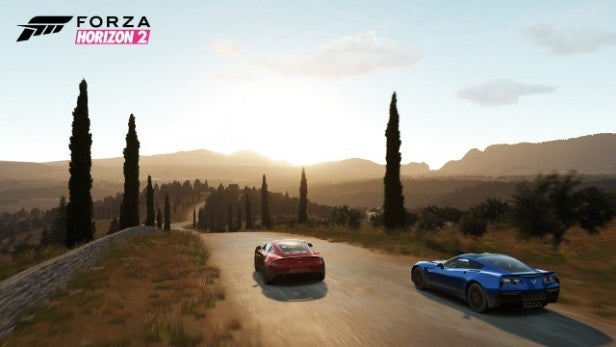 Its genius starts with the setting. Forget California, fictional cities or Horizon’s still impressive Colorado mountain country: Horizon 2 comes to Europe, and to the border between Northern Italy and Southern France. From picturesque mountain villages to world-famous seaside resorts, this game really does have it all, with some of the most ravishing coastal scenery you’ll have seen in a video game, and some equally lovely sights inland.

It’s not just good to look at, either; it’s just as brilliant to drive. Take a hot hatch for a spin along the coast and into the mountains – a Focus RS, VW Sirocco or Alfa Giulietta – and there are serious thrills to be had in the sudden turns and sweeping corners. Take a Pagani Huarya from Castelleto towards Nice, and your stomach will be in your mouth as you dodge other vehicles and work to navigate the bends.

But then the great thing about Forza Horizon 2 is that you’re never limited to the normal ribbons of track and tarmac. Speed through the lavender fields of Provence, or go off-roading up in the hills or mountains. As long as your car can take it, the incline isn’t silly and you don’t hit anything too solid, you can go pretty much wherever you wish. 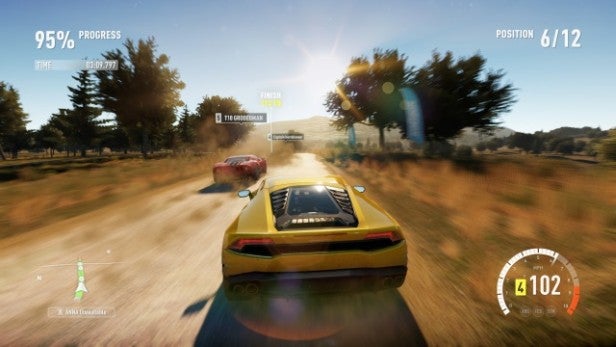 That’s a fact the game explores throughout its many championships. As with Horizon, the conceit is that you’re taking part in a music and motorsports festival, where the world’s best drivers gather to race, party and share a love of all things automobile. Once you’ve qualified for festival entry, you’ll constantly unlock new events, giving you a chance to win credits, buy cars and unlock further races, taking you further and further around the map.

Where everything in Horizon radiated out from one central hub, Horizon 2 has a slightly different structure. While you’re free to roam where you will, the campaign is split into a series of road trips, each taking you to several different regions, with a central hub and a choice of championships in each. Which one you enter depends on your current choice of car, though you can change both car and championship midway through, and the game prompts you to pick and event and buy an appropriate, affordable motor before you drive on to the next set. 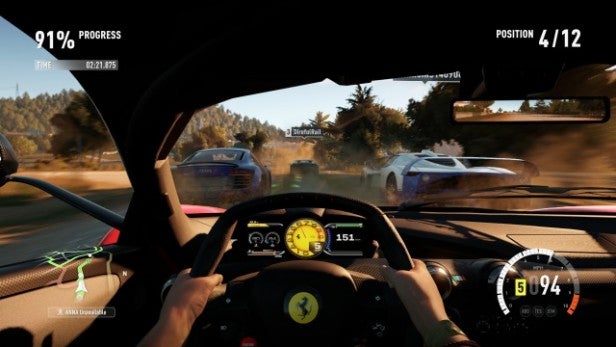 You might miss the greater freedom of Horizon, but it’s hard to complain when there’s so much to explore, with so much variety, and when so much of it is so much fun. One championship might have you tackling street races and point-to-point races in hot hatches. The next might have you hurtling through the open countryside in a chunky 4×4, speeding the hapless Chelsea tractor through farmer’s fields, golf courses, medieval ruins and scenic river valleys. Another might see you driving around in a lightweight ‘track toy’, cornering like crazy and weaving through the pack. It’s never repetitive, a grind or tiresome. If you like driving and racing, then Horizon 2 will make you smile.

The formal events aren’t the only draw. Spread across the region you’ll find Bucket List challenges – one-off events that ask you to do something tough, fast or really dangerous with a borrowed car. Some are thrilling, others downright hilarious. We’ve yet to find one that isn’t memorable. 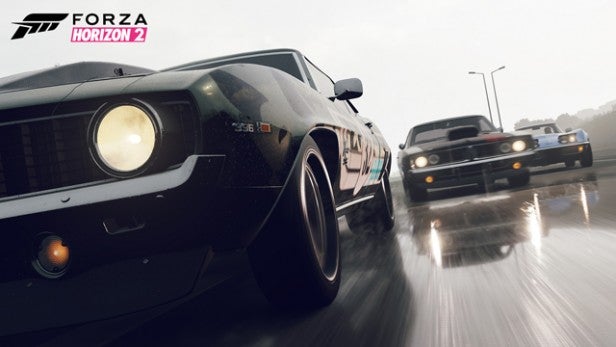 The same goes for the showcase events which cap each road trip. Some sites might spoil them, but we’d rather you discover them for yourself. There are stunts here that even the Top Gear team might baulk at. It’s hard to remember a racer since the brilliant Split/Second that has worked so hard to make racing so spectacular – or so damn entertaining.

On the default settings you might not find it challenging. Damage is nerfed, the handling satisfying but a little too smooth. Horizon 2 uses Forza-5 style Drivatars, giving you AI competition based on real players’ driving styles, but here the Drivatars are challenging without being mindlessly aggressive. They might trade paint, but they don’t seem set on tearing your vehicle apart, wheel by wheel.

If that’s the case, it’s not hard to change it. Twitching the difficulty up from medium makes for a much more demanding game, but you can also nudge the settings one by one. Turn Damage up and too many knocks can wreck your car, putting you out of the race. Change the steering options and assists, and Horizon 2 plays more like Forza 5, making it easier to lose control and spin, but also adding new levels of tension and excitement to the action. It’s all up to you. You can enjoy Horizon 2 in your own way. 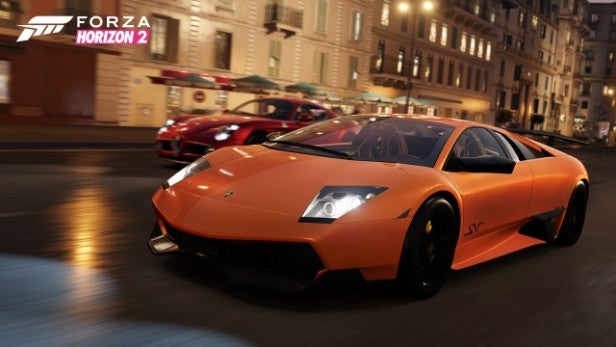 This kind of generosity seems endemic. You don’t have to grind your way to get a great car here, with credits dished out for winning, but also as prizes in a ‘wheelspin’ game whenever you level up, with sometimes hundreds of thousands thrown your way. You level up by driving stylishly; taking risks, going off-road and skidding round the corners, and even when you’re in-between races those XP are mounting up. You’ll be given cars for completing certain events, and there are even hidden – often vintage – vehicles loitering the landscape, concealed in remote barns. There really is an awful lot to see and do.

Meanwhile, you never feel that you’re racing alone. Even when you’re offline you’ll see drivatars screeching and rumbling their way around the roads, and online play is never far away, with both standard online play in the shape of free-roaming and road-trip options, and asynchronous online play through driving clubs, where you compete both within and for your club in the various events. We haven’t had much experience of the online game at the time of writing, but we’ll be back with an update when that changes. 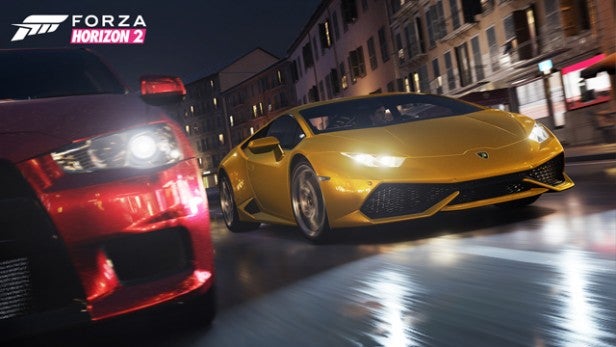 Horizon 2 uses the power of the Xbox One to fuel a bigger, better kind of open-world racing game, but it also uses it to create the most beautiful racer you can buy right now. The car interiors might lack the detail of the best in Forza 5 or Gran Turismo 6, but the exteriors look incredible, with light seeming to sparkle and glow around every surface, every curve.

We’ve already talked about the scenery, but what hits you is the detail; the pedestrians you’ll find, sometimes in the strangest places, the way dust kicks up beneath the tyres, or a wheel arch seems to shift around precariously after an impact. The rain effects look superb and also have a tangible effect on the way your car drives. You can never call a game where a tiny Caterham can hit a lamppost with disintegrating realistic, but Horizon 2 does an incredible job of selling the experience.

Credit, too, to those who worked on the soundtrack. Not only do the vehicles sound magnificent, but the game’s fake radio stations provide a fantastic selection of urban grooves, leftfield rock and drum n’ bass, with more – like a fantastic mock-Italian classical station – tossed in fairly early on. There are times when Horizon 2 seems to get the music and the action in a perfect sync. 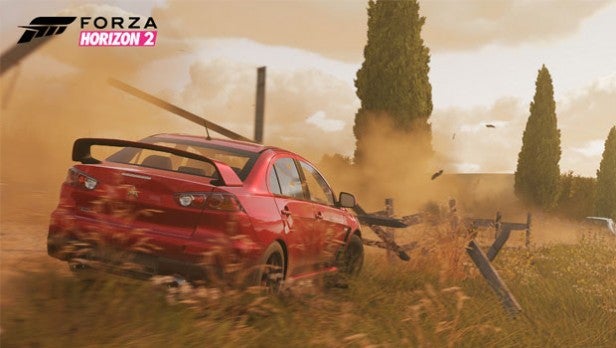 Is there anything at all wrong with Horizon 2? Well, we were prepared to have a moan about vehicle customisation and upgrade options, but then we found them lurking just a bit beneath the surface. Occasionally the frame rate stutters, but we’re talking once for a tiny fraction of a second in every half hour or so of play. The individual radio stations might do with a few more tracks, but we haven’t got bored yet of the ones we’ve found. For goodness sake – this is a game that even finds a good use for Kinect as you don’t have to take your hands off the wheel to set your in-car satnav (aka Anna).

But then we come to the matter of Ben. As we mentioned in the preview, this irritating chump is your in-game bestie, always inviting you to do something really cool or reminiscing about the time you guys had last night. He is unbearable, not to mention the worst, most unrealistic-looking thing in the entire game. To put it in perspective, though, he’s not really in it all that much.

Nope. Sorry. Even Ben can’t ruin a game as good as this. Forza Horizon 2 is about as close to perfect as an arcade racer gets. It might not have the depth of a GT6 or ‘proper’ Forza, but who cares when there’s so much glorious surface, and when all of it is much fun?

Verdict
A near-perfect arcade racer, with gorgeous graphics, beautiful scenery and some of the best on-road and off-road driving around. With Forza 5’s guts still inside it, you can make Horizon 2 as arcade-easy or demanding as you choose, and throughout the game shows a level of flair and invention that leaves its would-be rivals choking dust. It might not be the best racing game we’ll see this year, but it sets a fearsomely high benchmark for others to beat.