What is the Xbox One Digital TV Tuner?

The Xbox One Digital TV Tuner adds yet another entertainment feature to Microsoft’s latest console. The Xbox One is compatible with cable and satellite services such as Virgin Media or Sky out of the box, but the Digital TV Tuner enables users to also watch free-to-air channels from Freeview, Freeview HD, FreeSat and FreeSat HD.

That means Freeview control via your Xbox, complete with the OneGuide EPG and also voice commands if you’ve got the Kinect add-on.

Turning your Xbox One into a £25 Freeview HD box, it seems like the Digital TV Tuner is the accessory that will make the Xbox One into the ultimate home entertainment console. And it’s another exclusive for Microsoft’s gaming powerhouse. 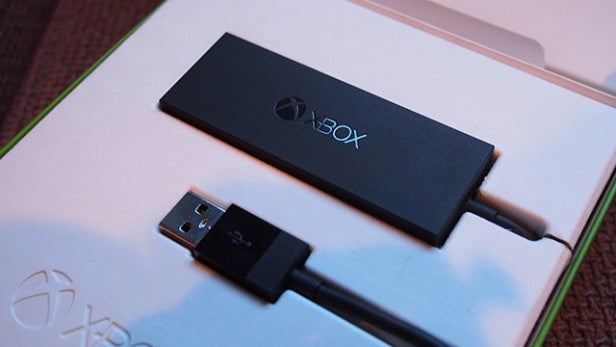 The Digital TV Tuner will mostly be shoved out of sight in a muddle of wires, but even if it does pop into view, its discreet styling means it’ll hardly be noticed.

It’s a small matte black box with a gloss Xbox logo on the top. At one end of the unit you’ve got your coaxial aerial input, while the other end leads onto a USB cable.

The Xbox One doesn’t even have to be switched off to do this – if you leave it switched on, your Xbox One will be prompted to help you through the quick setup process. 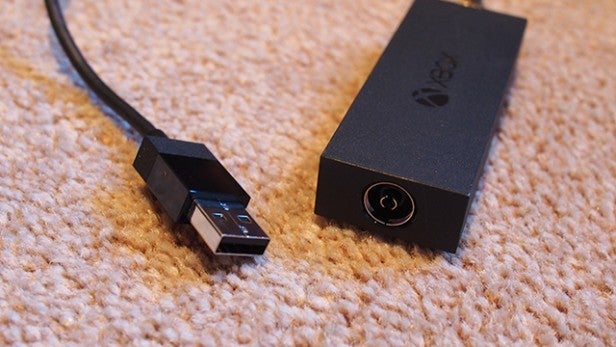 Once you’re all plugged in, you’ll be guided to the Xbox One TV setup process, where you’ll need to choose the USB TV Tuner option. Then at the next section tick the Antenna box, enter your postcode when prompted… and then it starts to get a bit tricky.

It’ll ask you to choose your TV provider. For us in London, we had two options: one for London and the other for National Line-up. Then there’s a TV Line-up option at the next section, where we were presented with a variety of options.

Even if you choose the most obvious of the options, we could find the channels but couldn’t get any programme information when we reached the OneGuide, even though the channels were working perfectly.

Thankfully, if you hit the Menu button it’s very easy to go back to the basic TV setup options and tweak your provider and line-up until you get all your channels and their associated programme information.

The setup process will also ask if you want to use Kinect voice commands for the OneGuide, which we’d heartily recommend if you own the gaming peripheral, and if you want to give your Xbox One control over your TV. This means that if you turn the Xbox One on, you’ll automatically turn your TV on, too.

You can apply this to your other home entertainment kit at a later stage via the settings, if you want to turn on everything at once, including your home cinema system. 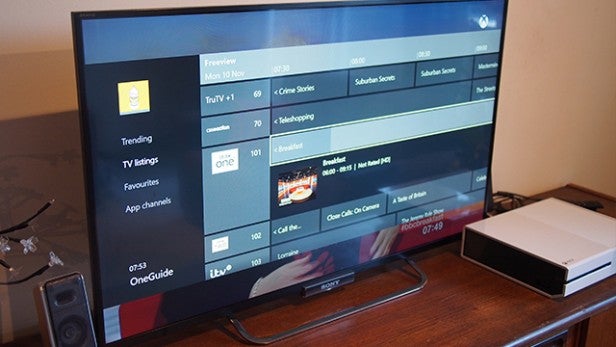 Once everything’s set up, you literally start watching TV immediately. To access the OneGuide, hit X and you’ll be presented with the long list of Freeview channels, including all of the HD and radio options.

The OneGuide lets you look eight days forward into Freeview programming, but you won’t be able to record anything. However, you can pause, fast forward and rewind live TV up to 30 minutes forward or behind, which is great if you want to run and make a cup of TV during advert-free BBC programmes.

You don’t get any downgrade in picture performance running it through the Xbox One Digital TV Tuner, either, especially on the HD channels.

We would say that changing channels is quite a bit slower via the Xbox One than on our 2013 Sony KDL-42W653A, though, so be prepared for a bit of lag there.

However, what the OneGuide does offer is app integration with your regular Freeview TV viewing.  You can access streamed content from a number of different services, including YouTube, Twitch, Upload Studio and Plex.

If you’re part of the Preview programme, or wait until the November update drops, you can also see which TV programmes are trending on Twitter, keeping you up to date with the most popular shows among your Twitter crowd. 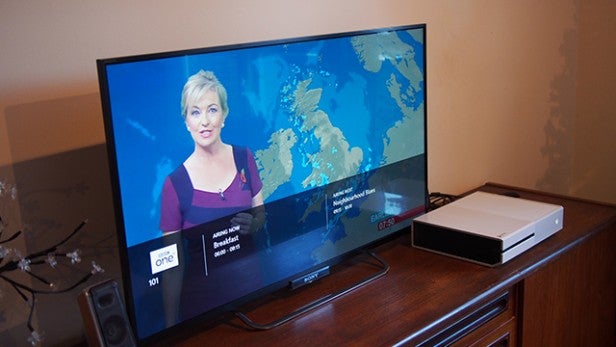 Another unique feature you’ll get with the Digital TV Tuner is the ability to stream Freeview content to your mobile devices using the Xbox One SmartGlass app.

If you’re rocking an iOS or Windows Phone device with the Xbox One SmartGlass app installed, you can directly stream your TV content to your mobile device over the same home Wi-Fi network. It’s a great addition if someone wants to watch TV on their device while you’re playing an Xbox One game on the big screen, for example.

Strangely, the live TV streaming is a feature currently missing on the Android version of the SmartGlass app. Hopefully it’ll be added in a future update, but at the moment it does seem a huge omission, especially when you’ve tried it on other devices.

Thankfully you can use any device to control your TV viewing on the Xbox One, though, meaning you don’t have to use your controller to change channel if you don’t want to.

You can still pause live TV via the SmartGlass app, but we wouldn’t recommend it. There’s a distinct lag between playing the content and actually being able to watch it, as the content’s buffered by the Xbox One.

Also, as there’s only one tuner, you can’t watch a different channel on the main TV and stream a different one to your smartphone or tablet.

If you want your Xbox One to be the ultimate home entertainment system and you’re not a Virgin Media, Sky or other cable subscriber, the Xbox One Digital TV Tuner really is a must-have.

At only £24.99, it’s affordable and brings with it a host of new features that’ll make your TV and Xbox One properly connected as part of a whole package. The SmartGlass TV streaming is only available when using the TV Tuner, too, so it might even tempt some existing cable subscribers.

Combined with enhanced media features such as Plex, DLNA support and Now TV, the Digital TV Tuner means the Xbox One is really becoming the entertainment hub it was always touted as being.

Next, read Xbox One tips and tricks