Available on Xbox 360 (tested), PS3 (PC, Wii U, Xbox One and PS4 to follow)
I feel sorry for Assassin’s Creed 4: Black Flag. Taken purely on its own merits it’s one of the best games in the series, stronger than Assassin’s Creed and Assassin’s Creed 3 even if it can’t quite match the standards set by Assassin’s Creed 2 or Brotherhood. In a way, it bears the same relation to Assassin’s Creed 3 (which we’ve liked less as time’s gone on) that Assassin’s Creed 2 shared to the original game. It’s a lighter, tighter, more palatable follow-up that transforms a near miss into a decent game. Yet where Assassin’s Creed 2 had only one game behind it, Black Flag has the misfortune to have five. Inevitably, then, it’s the victim of Assassin’s Creed fatigue, and of inheriting such a bloated mass of game features, mechanics, back-story and assorted nonsense. Don’t get us wrong: when it’s good, Black Flag is absolutely brilliant, but there’s a lot that’s too familiar or simply, well, too much. 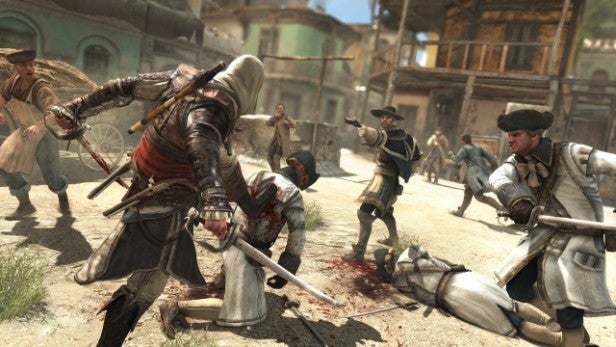 That’s not to say that it’s all same old, same old. Just as AC3 was all about taking the series out of the city and into the wild frontier, so AC4 takes the action to a new stage; to the deep blue seas of the Spanish Main during the golden age of piracy. Our hero, Edward Kenway, eventual father to AC3’s Haytham Kenway and grandfather to Connor, doesn’t even start the game as an Assassin, but as a greedy privateer. Meanwhile, Black Flag takes the naval action that was a sideline in AC3 and puts it centre-frame, and while you’ll still spend hours climbing up tall buildings, performing parkour runs across the rooftops and tackling guards and targets with pistol, hidden blades or sword, you’ll spend just as much time on the waves, wrecking ships with broadsides and looting their cargo. This is Assassin’s Creed meets Pirates of the Caribbean.

Black Flag also shows that Ubisoft has listened to some of the complaints about Assassin’s Creed 3. While Edward might not have the charm of AC2’s Ezio, he’s still a more engaging protagonist than AC3’s grumpy Connor and has a more interesting story arc. This year’s game isn’t as slow to get started as last year’s either, and the pacing is less ponderous and more robust. It’s not that Black Flag is devoid of talky cut-scenes, tedious shadowing and eavesdropping missions and the odd sequence with TUTORIAL written all over it, but it feels much more like a ripping yarn, and one that pulls figures from history without getting bogged down by the details. It also finds a new approach to the modern day Abstergo framework which is both vaguely refreshing and much less intrusive than the old Desmond Miles interludes. 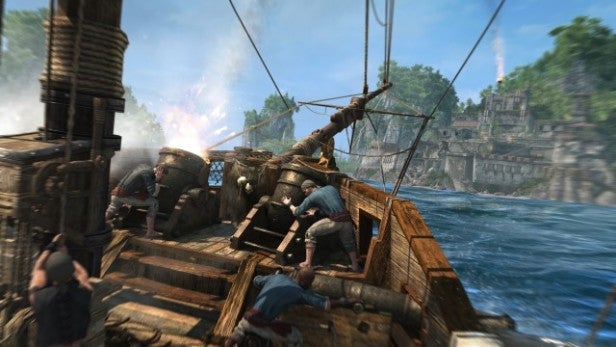 At first, Black Flag struggles to feel much different from Assassin’s Creed 3, or the Ezio trilogy for that matter. Kenway’s mysteriously practiced parkour skills work much like Connor’s, while fighting hasn’t changed noticeably from the attack and counter mechanics we saw last year. Enemies still have an odd way of hanging around so that you’re only tackling two or three at a time, which makes it feel strangely polite. All the stealth and survelliance missions, all the sneak and destroy missions, all the escort, protect and rescue missions you expect from an Assassin’s Creed are there, and while it’s a bit much to say ‘been there, done that, bought the T-Shirt’ the formula seems to be growing stale. In its very early stages Black Flag leaves you pining for something new.

It finds it once the game takes to sea, as naval battles, plunder, mysterious islands and Mayan ruins flood the storyline and outftting your ship becomes as important as keeping Edward equipped with better swords and tougher clothing. The sea – sometimes calm, sometimes stormy, but constantly in motion – is the star of Assassin’s Creed 4, and it and the rocky, inhospitable tropical islands it surrounds make for a more compelling setting than AC3’s US colonies. 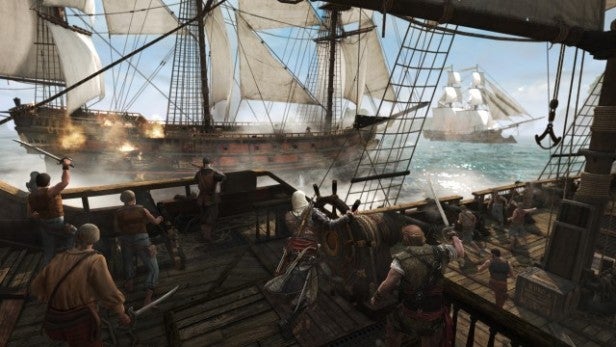 Once at sea the game feels energised. The naval combat is both more sophisticated and more challenging than it was in Assassin’s Creed 3, with stronger and more numerous ships that make it both more dramatic and more grimly satisfying. It’s not exactly a realistic take on ship-to-ship battles, but ships have enough heft and more than enough firepower to make it feel unlike anything else you’ve played, and the final boarding action gives each encounter a satisfying conclusion – though a slightly out of place one when you still have other enemies in the vicinity to finish off. Whether you’re tackling Spanish frigates with cannon, fire barrels and mortars, boarding shattered ships or preying on weaker trading vessels, you can’t help feeling that the pirate life’s for you. Some of this energy leeches out into the land-based missions, too, and while Edward does little that Connor wasn’t doing before him, the tropical scenery and mysterious ruins help freshen things up. Kudos to Ubisoft, too, for using fast travel modes and handy on-ship stores to cut down on back-tracking and wasted journey time.

Sadly, it’s not all good news. Like Assassin’s Creed: Revelations, Black Flag sometimes feels incoherent or lacking in polish. Some missions feel underdeveloped. Others push your patience with ludicrous restrictions or appear to throw random elements into the mix. One naval mission, for example, had to be repeated over and over again because other ships kept appearing and joining in the battle. Eventually we cornered the ship on its own and won through, but it felt that we eventually won more through luck than judgement. 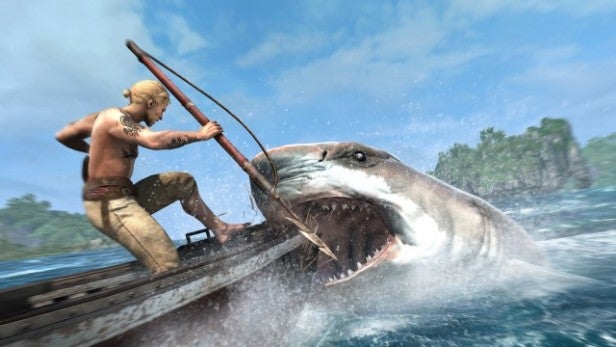 And like Assassin’s Creed 3, Black Flag can feel bloated. Sure, it’s great that there’s so much to do. You can track down schooners and harass the foreign navies, find maps and seek buried treasture, hunt for meat and animal skins, not to mention collect animus fragments, sea shanties and a host of other collectibles. There are hacking mini-games, shark-harpooning mini games, not to mention assaults on coastal fortresses. You can dive for sunken treasure, gather keys and Mayan artifacts or craft yourself new clothing. Yet while this all keeps you very busy, a lot of the activities aren’t actually that deep or entertaining. The Caribbean has dozens of islands, but only a few have any distinct personality or something real to do. Black Flag is a game with a vast list of features, so why do so few of them feel like they count?

At least you can’t question are the production values. While not every character holds up under close scrutiny, the modelling and animation is mostly superb, and the game is a one of this console generation’s late visual triumphs, full of beautifully-lit and rendered Caribbean scenery, detailed characters and that spectacular sea. The weather effects, which affect the gameplay as much as the aesthetic, are some of the best we’ve seen. The score is suitably sweeping and enhanced by some choice sea shanties, and even the voicework comes good once you get used to Edward’s distinctive voice (it took us a while before we realised he was meant to be Welsh, not merely English with a rubbish accent). 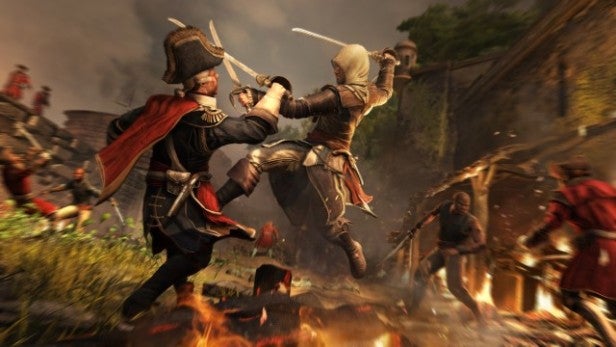 In the end, Black Flag has some strong ideas, a decent story and more than its share of great Assassin’s Creed moments. The more you get into it, the more intriguing it becomes. Yet it still can’t quite convince us that this series isn’t running out of steam. Maybe it’s time Assassin’s Creed stopped throwing in new features and focused on a more thorough revamp. Maybe it’s time to think about a fresher, more flexible approach. Either way Black Flag is good enough to keep the series shipshape, but it’s going to need more to keep it sailing ever onwards.

Verdict
Black Flag works as a ripping yarn, more immediate and entertaining than Assassin’s Creed 3. While the core gameplay is growing slightly stale, the seaborne action explores new territory and helps keep the franchise afloat. The result is a mostly gripping pirate tale that should please fans of the series even if it doesn’t surprise them.