The Xbox One X is the most powerful console money can buy, at least until the next gen consoles arrive in 2020

What is the Xbox One X?

Ahead of the PS5 and XBox Series X launching next year, Xbox One X is the most powerful gaming console you can buy right now. It represents a major performance boost over the likes of PS4 and Xbox One S – providing players with greater resolution, improved performance and other bonuses.

4K is the name of the game, and this machine does a sterling job of serving up games at the fabled 3840 x 2160-pixel resolution.

But it’s not quite that simple. While the number of Xbox One X games is increasing by the day, there are still many which won’t offer bespoke advantages on the new hardware. In addition, not every game you played on the original Xbox One or Xbox One S will look better, or even play better, on the One X; it’s entirely on a game-by-game basis.

Aside from muddying the waters, there’s no disputing that the Xbox One X is a seriously impressive piece of hardware that takes console performance to new heights.

But does that make it a must-buy?

Xbox One X – Design and connectivity

The One X is a nice, but not lovely, piece of kit. Smaller in (almost) every way than the Xbox One S, it’s practically pint-sized compared to the first version launched in 2013. However, don’t imagine it’ll slot into your media centre like a normal Xbox – instead of an exhaust fan on the top, there’s now a wide exhaust at the rear of the console. 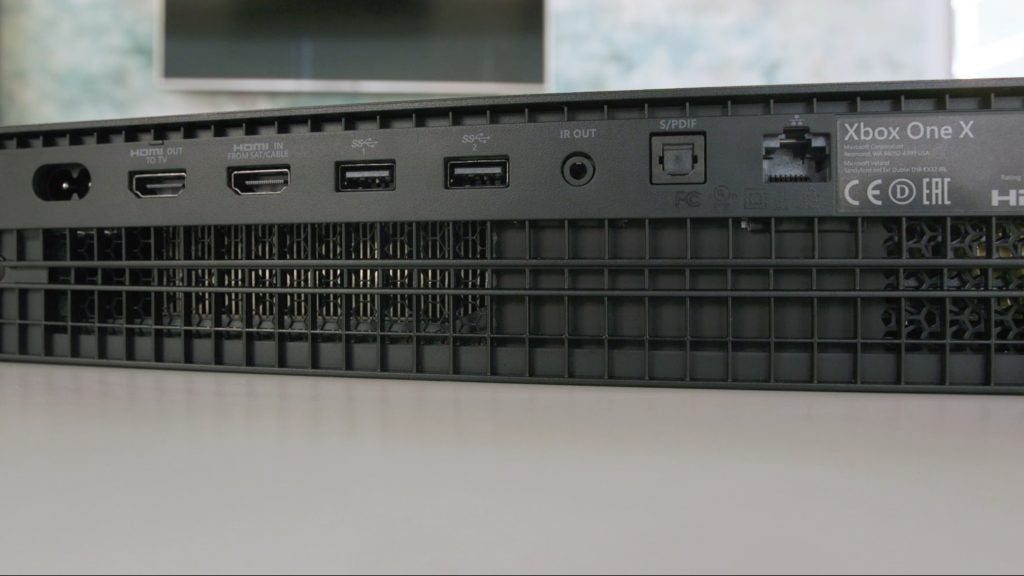 This is great for those who want to stack other AV kit on top of the Xbox One X, but it does mean you’ll want to give a bit more room around back to accommodate the new cooling system.

In terms of ports, the setup is exactly the same as the Xbox One S, with most sitting around the back. Easy peasy. In fact, the only thing that’s changed is the placement of the IR receiver and front-facing USB port, which have swapped sides. There’s Wi-Fi, as always, along with a wireless receiver for controllers as well as a 4K Blu-ray player that functions identically to the one in the S.

In terms of build, it’s standard Xbox fare, with a matte black plastic housing. Even after a week of abuse (dropping controllers and power adapters onto it and constant HDMI cable swaps and power cable pulls) it looks as pristine as the day it arrived. I personally prefer the white Xbox One S, but each to their own.

In the box you get the figure-eight power adapter, a HDMI 2.0-certified cable and a standard Xbox One controller with non-rechargeable AAA batteries.

Xbox One X – Specs and technology

Yes, I know you want to find out how this console plays and what the games look like. But in order to understand what the One X is capable of, we need to understand what’s under the bonnet. I’ll keep it brief, I promise. But if you must skip ahead, head to page two of this review where I’ll dive headlong into graphics analysis. 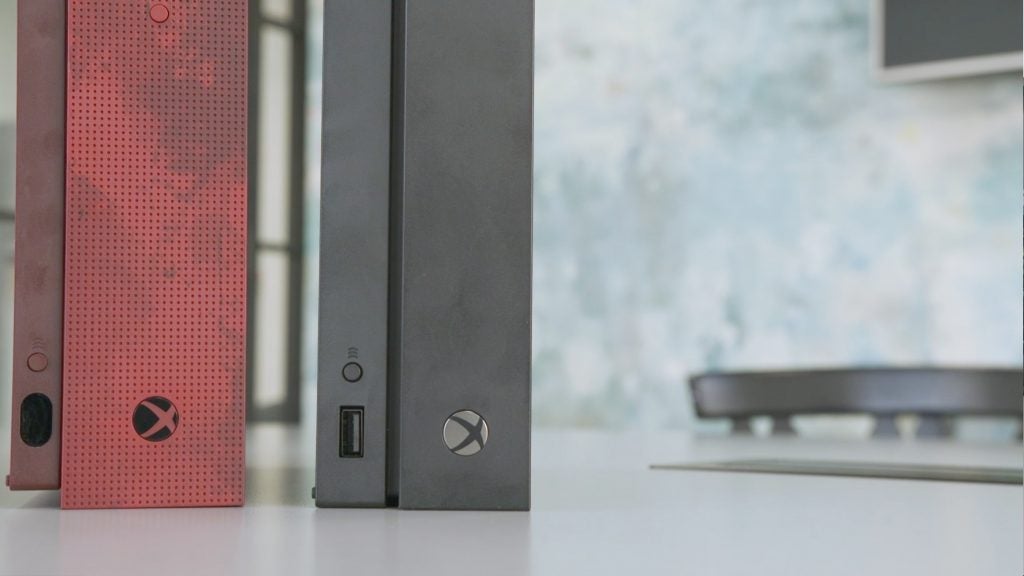 There are a fair few elements that contribute to the One X’s improved performance and graphical prowess. The first is simple, and that’s fidelity. Previous Xbox consoles have produced Full HD (1920 x 1080-pixel) images, with the Xbox One S using a technique called ‘upscaling’ to output 4K Ultra HD (3840 x 2160-pixel) resolution.

The One X is different. Instead, it produces Ultra HD images from the off. This means the graphics hardware (GPU) has to work four times as hard to produce each frame – something it has to do up to 60 times every second to keep up with a TV. The expected result? A much, much sharper image that makes proper use of all those pixels in your fancy 4K TV.

That’d be impressive enough, but in order to make those super-sharp images look the bee’s knees, the Xbox has to work even harder. It’s no use having a super-sharp image if it looks a bit naff elsewhere. That’s where the second upgrade comes in, and that’s what I like to call graphical eye-candy. Eye-candy is the sort of stuff you’ll notice when playing an immersive story-driven game like Gears of War 4 or Rise of the Tomb Raider. You’ll see light rays filtering through trees, shadows that more accurately reflect what’s going on in the world, higher-quality reflections, the ability to see further and in more detail, and much more. 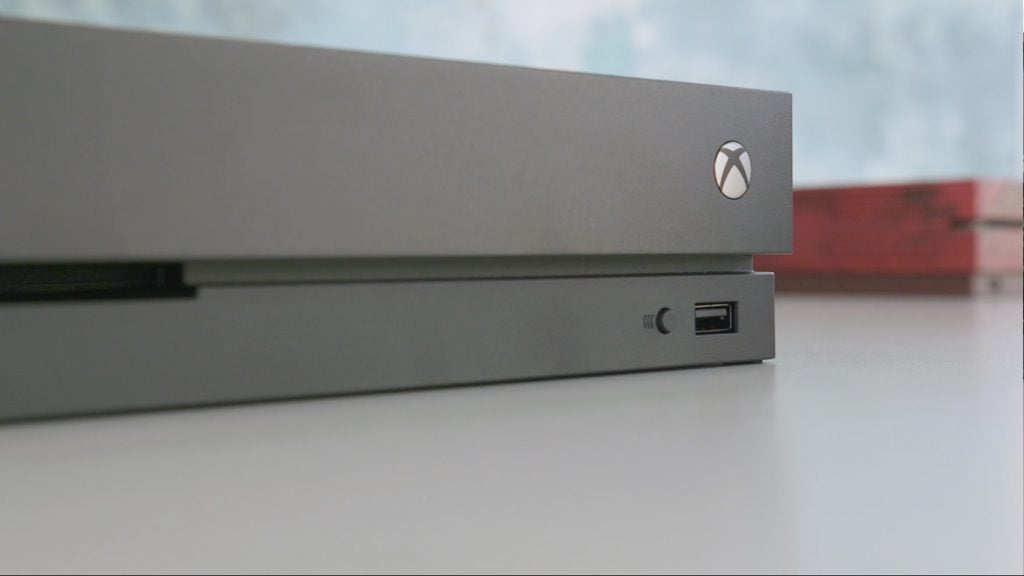 Some games will even support wide colour gamut HDR, which means you’ll see more and brighter colours than ever before. Some games on the Xbox One S already supported this, but in conjunction with Ultra HD and the other graphical enhancements, it should look more spectacular here than ever before.

But it’s not as simple as firing up your favourite game and enjoying the new graphics. Each developer for every game has to go out of its way to update a game in order for it to take advantage of the One X’s new hardware. Look out for the ‘One X Enhanced’ label on game marketing to see whether the title you’re most excited about will look any better.

All of this is possible because the One X is, according to Microsoft, almost four times more powerful than the Xbox One S. There’s an eight-core AMD processor running at 2.3GHz, and a much-improved AMD graphics chip with 40 Compute Units (versus 12 on the older models). There’s 12GB of high-speed memory for the console to use, with around 9GB set aside for games and graphics. The whole lot is cooled by a vapour chamber that channels heat to the rear of the console via a state-changing liquid/gas copper heat pipe, to be deposited in a heatsink and cooled by fans. This is why the One X is able to be so powerful, yet so small. That, and a load of electrical wizardry that makes each individual component substantially more efficient. This is a little box of big tricks. 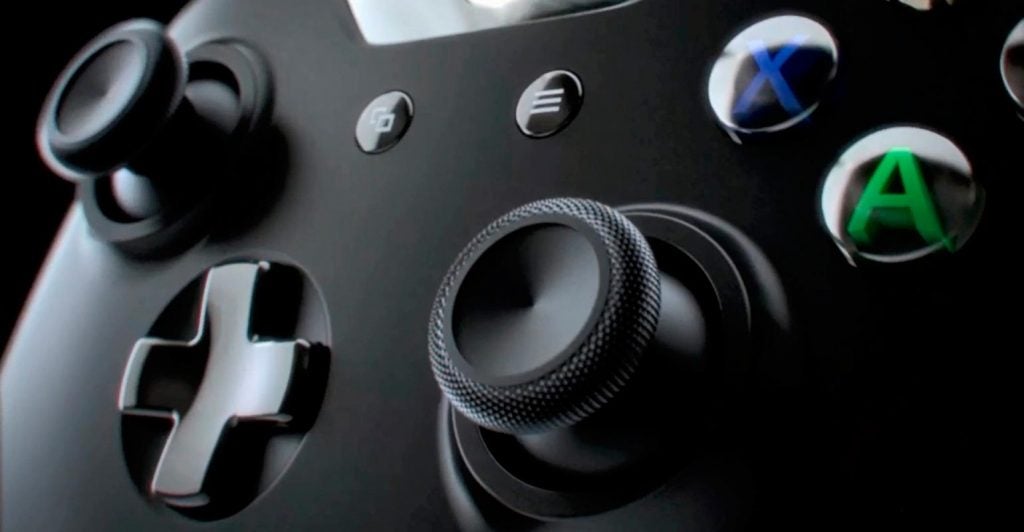 Speaking of little boxes, the 1TB hard disk is laughably small in an age where 4K games weigh in at over 100GB. You’re going to want to invest in an external USB hard disk if you don’t want to have to keep deleting games to make space for others. Fortunately, Xbox One consoles do at least let you run games from an external disk, so you don’t have to worry about moving them back and forth.

Now, let’s take a look at the performance of the machine.

Next
Performance and 4K gaming Review