What is the Xbox One Elite Controller?

When Microsoft unveiled the Xbox One Elite Controller, with all its knobs, sticks and paddles, at E3 2015, we all gasped, oohed and aahed. It’s quite the work of art, with its brushed metal accessories and matte black soft touch finish.

And in reality, the Elite Controller’s announcement didn’t come as much of a surprise, seeing as the rise of eSports and competitive gaming has been huge.

The new Xbox One Elite Controller is a customisable gamepad that’s quite the upgrade over the regular Wireless Controller. It’s primarily aimed at the seriously competitive gamers, in particular the ones that tend to mod out their pads for the aggressive edge.

But with those customisation options comes a steep price – £129.99. So the question is, is the Xbox One Elite Controller worth it? 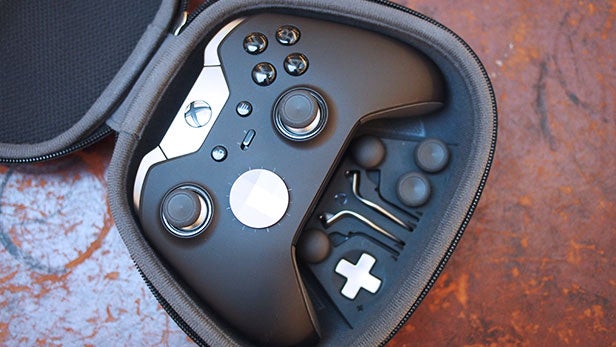 For your £130 investment, you’ll get a wonderful box of tricks. Sliding the lid off the box presents you with the Elite Xbox One Controller in its fabric-covered clam-shell case, which protects it when not in use, but also acts as storage for all the accessories.

By looks alone you could be forgiven for thinking this is a standard Xbox One controller with a lick of paint. But the little moulded rubber holder beneath belies its elite status.

The Elite Xbox One Controller comes with a pair of D-Pads – one a metal version of the regular D-Pad, but the other a faceted metal option – and three analogue stick choices. For the analogue sticks you’re looking at the standard concave diamond grip option, a taller version of these, and a domed set that sit between the two in terms of height.

There are also two sets of paddles that attach to the rear of the controller, and a long, braided micro-USB cable, which is a must-have for those competitive sessions.

All of these sit within the moulded rubber holder with the idea that you can store them securely when not in use, even when travelling around. In practice the spare analogue sticks and cross-style D-Pad all fit in securely, but the faceted D-Pad and the paddles come loose very easily, rattling about in the case. 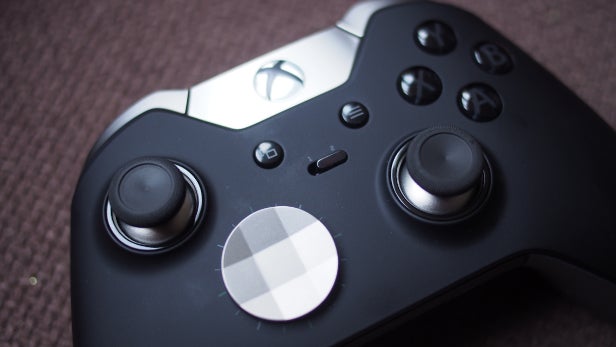 Although the weight is initially very palpable, you quickly become accustomed to the increased mass. In fact, it’s reassuringly heavy. The combination of the new matte rubber finish and the diamonised rubber grip on the underside, you’re looking at a controller that moulds into your hands and stays there – regardless of how sweaty your hands get during extended gaming sessions.

You get so familiar with the weight and feel of the Elite Controller, that the regular one makes feels cheap, rough and thoroughly inferior. Microsoft has ensured that by kitting the Elite Controller out with a mature, understated design. The colourful face buttons and plastic finish have been swapped out for a monochrome colour scheme and metal touches that makes the Elite look like a premium product. 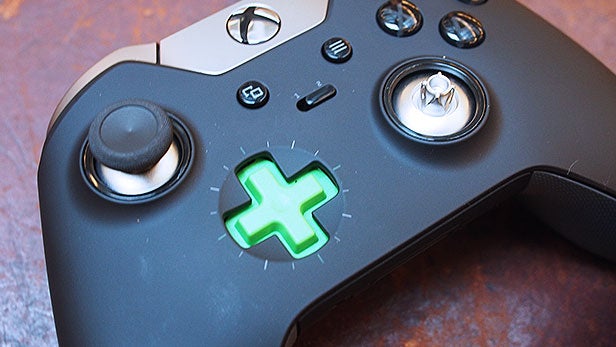 The triggers, D-Pads and analogue sticks are all now made from metal for durability; while the actual analogue stick sockets have been enhanced with a reinforced ring to make sure they last longer.

Both the D-Pad and analogue sticks are interchangeable, with the current option attached by magnets. While you’re playing, they feel safe and secure, but if you want to change them out for a new version, it’s quick and simple to do.

But these can be easily caught and dislodged as you pick up the controller. It’s a particular pain at first, when you’re getting used to have those extra appendages, but you will get used to it eventually.

I’m just worried what would happen if you lost one of these accessories, as it doesn’t seem like Microsoft will let you to replace them individually at this stage. 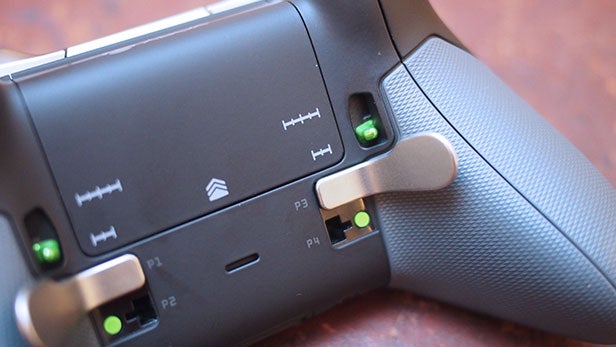 Around the back of the Elite Controller above the slots for these paddles is a green switch on either side.  These are associated with the new and improved Hair-Trigger Locks on the triggers. If you push the green switches down (and they operate independently), they’ll physically limit the travel of each trigger. In practice that means you’ll be able to aim and reload faster in shooting games, or whatever you use your triggers for. That’s going to be a massive boon for professional players where every second counts. 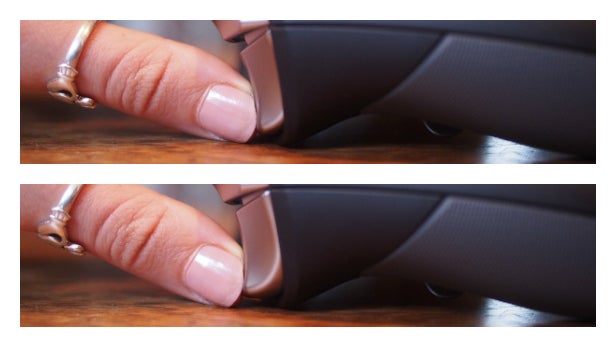 Other improvements on the Elite Controller include a standard 3.5mm headphone jack at the base rather than the irritating proprietary port on the regular controller. Next to that is a legacy connection for purpose built headsets.

You’ll also find that the Xbox One Elite Controller has some rather lovely shoulder buttons. Gone are the overly-loud clicky bumpers of the original controller, with the Elite instead offering a quieter, more even response wherever you press them. 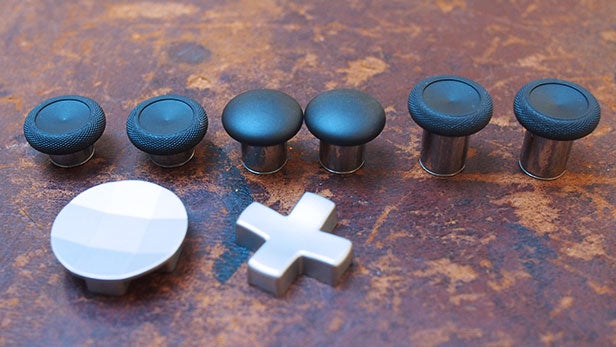 The app gives you the option to rebind the functionality of every button, trigger and bumper on the Elite Controller (aside from the menu and options buttons). You now have complete control over how your gamepad works, without being confined to customisation on a game-by-game basis if you don’t want to be.

The Xbox One Elite Controller can store two button mapping configurations at once. The controller lets you switch between them using the slider underneath the options and menu buttons. You can store even more configurations in the Xbox Accessories app and load them onto the controller as and when you need them. 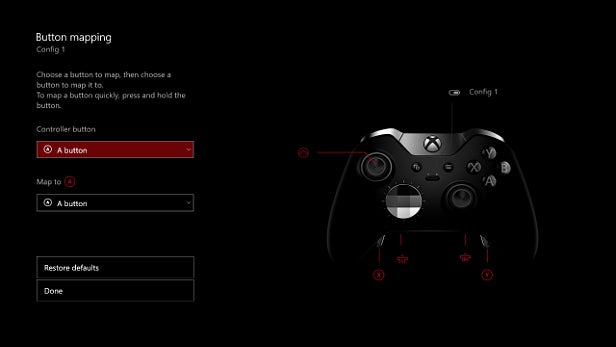 There are a few pre-made options in the app too, for games such as Halo 5, the Gear of War: Ultimate Collection, new racer Forza 6 and even the classic Sunset Overdrive. Microsoft promises that there are a tonne more en-route too.

They’re great for those among us who find the thought of remapping every single button totally daunting – and trust me I did at first.

The app also goes beyond basic button-mapping too. There’s individual adjustments for analogue stick sensitivity that manage the distance the sticks need to travel before they react as in-game movements. These include: delay (slow start), aggressive (fast start), instant, smooth and default.

You can also adjust the sensitivity and dead zone of the triggers. The app even lets you turn down the haptic feedback and adjust the brightness of the Xbox light. For those among you that like things a certain way, the Elite Controller also lets you swap the sticks over, permanently invert the right or left stick’s Y-axis or swap the triggers around.

Related: Xbox One backwards compatibility – Can I play Xbox 360 games on my Xbox One? 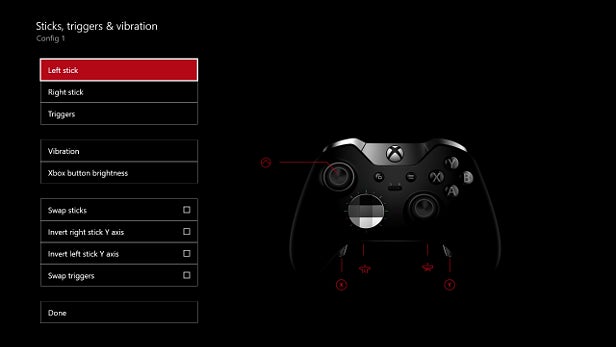 In practice, for me the customisation started slowly. I began by adding two paddles for Rise of the Tomb Raider – one for sprinting and the other to initialise the Survival Sense.

But the more I used the Elite Controller across a number of games, the more time I spent tweaking and analysing my button mapping.

Take Forza 6 for example – a game where the back paddles really come into their own. Suddenly you’ve got the manual car controls at the press of a finger, which is especially handy because I don’t really want to fork out for a racing wheel that’ll clutter up my home. Instead, I’ve got the Elite Controller to provide me with more of an authentic racing experience, while still providing me with an excellent gamepad for other games.

Elsewhere, I started using one of the Halo 5 presets to make commanding Team Osiris much easier, as suddenly I’m not having to reach down for the D-Pad anymore, but toggling commands using the back paddles.

If you’re a fighting game addict, then the faceted D-Pad will also be a huge success. Although I’m using it because I prefer the feel of it under the thumb and the general look, I’m assured that it makes it a lot easier to pull combos in titles like Mortal Kombat X and co. 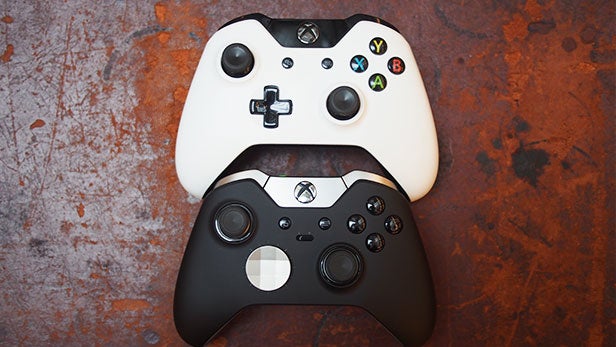 Should I buy the Xbox One Elite Controller?

Although I’m totally addicted to the Xbox One Elite Controller now I’ve used it – God forbid I’m forced to go back to the regular one at this stage – my recommendation comes with some caveats.

If you’re looking to spend £130 on a controller, you need to seriously think about how much you play on your Xbox One and what games you’re playing because it is around £90 more than a regular controller.

However, for your £130 investment you will get the ultimate customisable controller that will no doubt last the entire lifespan of your console – and possibly longer.

The Xbox One Elite Controller really is the one controller to rule them all, with its mature aesthetics, strong customisation options and durability. You might just want to wait for a price drop before you buy.