Exclusive to Xbox One
Less a compilation, more a celebration, Halo: The Master Chief Collection runs in danger of giving you too much of a good thing. We all know Bungie’s Halo mantra – thirty seconds of fun that happens over and over again – but here we get that thirty seconds repeated over some forty hours of epic sci-fi action, and that’s without considering multiplayer, co-op and replay value. Do you really love Halo that much?

Perhaps you ought to, because The Master Chief Collection proves that Bungie’s series can last the distance. The first three Halo games have all dated to some extent, and playing them again throws up flaws you either didn’t spot first time around, or that your brain has generously glossed over. Yet it’s still easy to see why each game in this collection is considered a classic. All hold up remarkably well today. 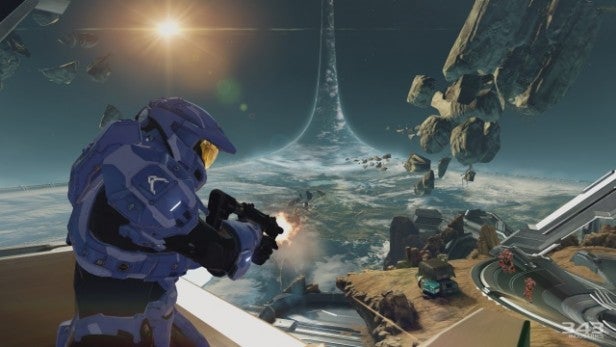 Here, Halo 2 is the centrepiece, given the same anniversary treatment that Halo: Combat Evolved enjoyed in 2011. In fact, it comes off even better, with the team at Sabre Interactive having the power of the Xbox One at its disposal. Models and textures have been lovingly reworked for a 1080p remaster while the lighting has been vastly improved. Switching between the original and anniversary versions – you can still do it anytime with a tap of the View button – is to see the impact of ten years of technical progress in an instant.

It doesn’t always look stunning. There’s only so much you can do with Halo 2’s rather sparse interiors and city scenes. The Covenant have the kind of detail we saw in Halo: Reach and Halo 4, while both the Master Chief and the Arbiter get shinier, more detailed armour, but you can’t mistake the remastered Halo 2 for a full-on next-gen title. In fact, you  appreciate the work that Sabre has put in here most when the action heads outdoors or some vast progenitor facility, where the game lives up to its epic scale, or in those moments where you can get up close to the more realistic water or luxuriously textured rock. 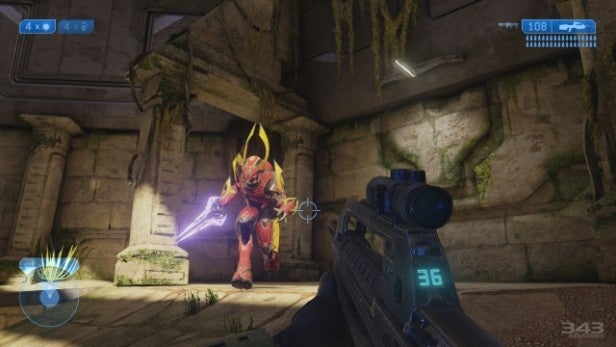 The gameplay, however, feels more modern than you might expect. It always takes a while to adjust to the run-and-gun action of a Halo after the tighter, iron sights focus of the more dominant military style of FPS, but Bungie’s classic still nails that thirty seconds of fun time and time and time again. The weapons, the alien designs, the environments and the emergent AI systems all conspire to make each encounter different from the last – or even the last time you tried it, should you die. The pleasure isn’t just in the mechanics of aiming, shooting and running for cover, but in the way you’re encouraged to try different tactics and different weapon sets. Do you take the brutes from a distance with the carbine then tackle the elites and grunts with a plasma rifle/needler combo, or do you go in close and deal with the brutes, then grab the brute shot and wreak havoc on the rest? Decisions, decisions.

And while Halo 2 still pushes you from one objective to the next, it still remains surprisingly open about which way you go and how you achieve it. Vehicles aren’t put into play to make you use them, but to give you another tactical option to explore. A wraith, a ghost or even a turret can be a threat, but it can also be hijacked and used to gain the advantage. Halo 2 always has you balancing the risks against the rewards, and it’s smart enough to checkpoint regularly so that you can try a new strategy, get wiped out, and come back in without feeling too frustrated. 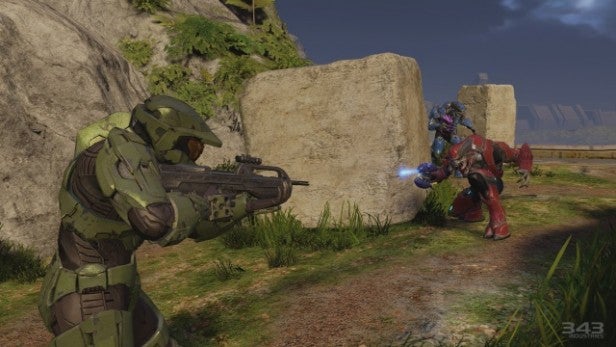 Halo 2 has never been my favourite Halo, and I still find chunks of the first half tedious and parts of the second half too drawn out – particularly those parts that focus on nobody’s favourite zombie enemy, The Flood. Yet that strikes you playing it again is how many great Halo moments there are. It’s epic battles still hit all the space opera high notes even today, and its willingness to delve deeper into the characters, and deeper into the Covenant psyche, still puts it beyond many more recent action blockbusters. It’s also helped along by a superb remastered soundtrack with enhanced surround effects, and by all-new cut-scenes which look like something from a major movie. You might have played Halo 2 before, but you’ve never experienced it quite like this.

The same can’t quite be said of Halo: Combat Evolved, Halo 3 and Halo 4, but each is still worth playing if you haven’t played it recently, and – frankly – worth it even if you have. The first Halo is basically the anniversary edition upscaled to 1080p and 60fps, though spoilt slightly by a weird juddering effect that kicks in when certain vehicles are on screen. It wasn’t state-of-the-art on the Xbox 360 and it’s not state-of-the-art on Xbox One, but it looks good enough to keep you playing through missions you’ve tackled a dozen times before, and Bungie’s artistry and design-nous still shines through.

Many of us would be happy to spend the rest of our lives without another jaunt though The Library or the slow, backtracking missions at the end, but The Silent Cartographer? 343 Guilty Spark? Keyes? Yep, we could handle that again. 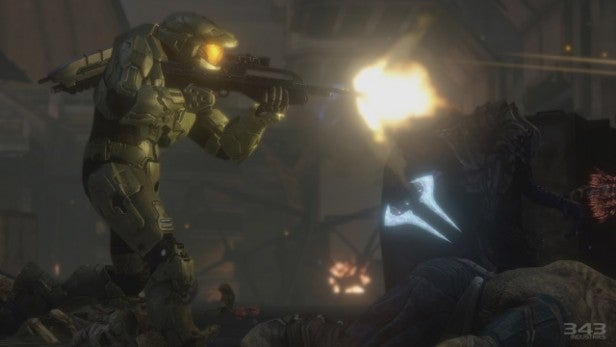 Halo 3 is a little more awkward. Visually, it’s now the least impressive game in the collection, too recent to be touched by high-resolution textures and effects, but too old to not look dated; a reminder that Bungie wouldn’t really master the Xbox 360 until its final Halo, Halo: Reach. Halo 3 is also sometimes too ambitious for its own good. It’s air-to-air and air-to-ground combat doesn’t really work, and any mission where you have to land a Hornet on the back of a Scarab and bring it down is an exercise in persistence, particularly when there are two scarabs involved and you don’t see fit to bung a mid-battle checkpoint in. Halo 3 also still suffers from Bungie’s weird belief that, maybe one day we’ll all come to fear and love the flood, and some of its base defence and infiltration missions have been handled better elsewhere, not least in the Halos that came before and those that have come since.

Yet it’s still a game that pushes to stretch Halo across a bigger canvas, and that frequently succeeds. Its combat is still thrilling, particularly in the sections where it’s not trying so hard to be an epic. What’s more, it finds a power and an urgency in the tale of one lonesome Spartan and his AI companion that keeps you pushing through. For some it’s the ultimate Halo, and while I’d disagree I can understand why it’s so. 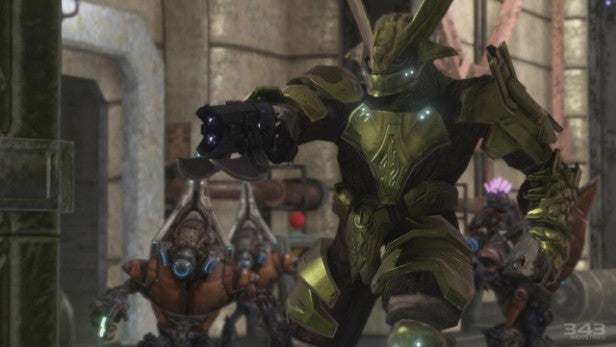 And Halo 4? Well, all we’d say is that everything we say in our original Halo 4 review still holds water, and that it looks incredible on Xbox One. Seriously, the Xbox 360 version looked like a next-gen game on last-gen hardware. In glorious 1080p with an enhanced lighting engine it now confidently outperforms many native next-gen titles, the odd bit of stiff vegetation notwithstanding.

Perhaps the best thing about The Master Chief Collection is the way it puts all this great stuff together. Microsoft has treated it like a deluxe movie box-set, packed with bonus special features and with all the content available from the off. You can complete each campaign in sequence, tackle individual missions or start where you want and carry on from there. You can play through a series of curated playlists, focusing on the missions or elements you like most, and avoiding those you’d rather avoid. 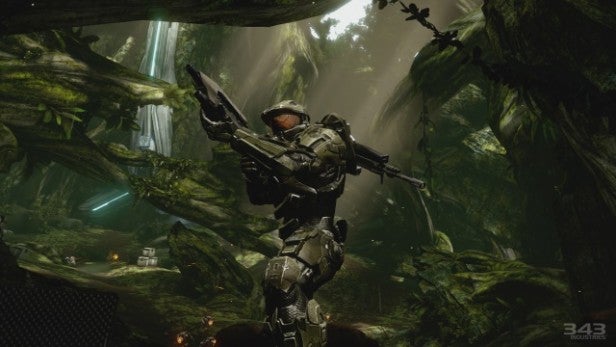 Like tanks? Like playing the Arbiter? Like big battles or assaults or even fighting against The Flood (seriously?)? Well, there are playlists made with you in mind. You can even play through the whole saga as one long string of missions, taking you all the way from the Pillar of Autumn through to the gloomy, ambiguous conclusion of Halo 4.

You’re also free to play them with a multitude of options, upping difficulty levels, turning on skull challenges to give you a harder time, or even switching on frivolous bonus features, like a party celebration to accompany every headshot, or overblown explosion physics for comic effect. These might mean nothing if you’re experiencing these campaigns for the first time, but there will be people out there who’ve played every mission of every Halo at every level of difficulty. In its own small way, The Master Chief Collection gives them a reason to come back for more. 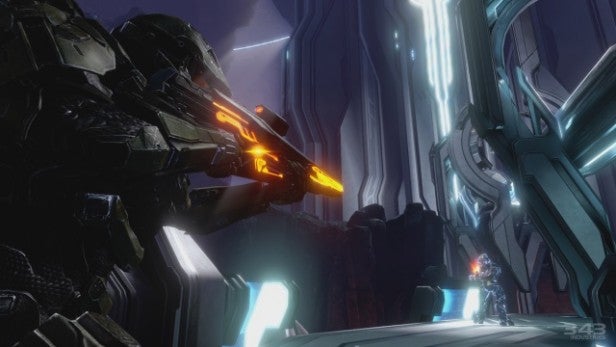 The Master Chief collection is every bit as generous with its multiplayer, dishing out HD reworkings of key maps from Halo 2 along with that game’s multiplayer modes, plus all the maps and modes from Halo Anniversary, Halo 3 and Halo 4. You can opt to play multiplayer from a specific game or take a mix and match approach. At the time of writing the Halo 3 and 4 content has only just come online, while matchmaking doesn’t appear to be working. As a result, we’ll leave specific comments for a future update when we’ve had more time to explore all these goodies in more detail.

Not everyone gets the appeal of Halo, or why the Master Chief can stand with Lara Croft, Mario, Link and Solid Snake as one of gaming’s few surviving stars. But while elements of the Halo saga haven’t worn well, and others stand out as gaping flaws, The Master Chief Collection is a potent reminder of how this series helped shape a genre and how forward-thinking Bungie’s work has been. It also underlines what a superb job 343 Industries has done in taking the Halo story onwards while setting the stage for Halo 5: Guardians. Yet we shouldn’t see The Master Chief Collection as a monument to Halo’s glories, but as a series of four amazing games that will still enjoy today. If you can, then do so. These are games that deserve to be replayed.

Verdict
An awesome, intelligently-conceived compendium that highlights why these games are so legendary and so beloved. Halo 2 benefits most from a lavish HD upgrade, but Halo 4 also benefits from the enhancements, making one of the Xbox 360’s most advanced titles look convincingly next-gen. If Halo 3 can look and feel a little dated, it’s still an enjoyable romp with real heart, and the original Halo still doesn’t seem its age. Add an incredibly generous bundle of multiplayer modes and maps from across the series and The Master Chief Collection is a must for Halo fans. Yet this is one HD remake that doesn’t have to rely on nostalgia: these golden greats can stand the test of time.