On one level, Forza 5 is everything it should be: the kind of launch title that makes you glad you’ve coughed up for a new console. It looks incredible, plays brilliantly, and ably demonstrates many of the virtues of Xbox One. If you have any kind of love for driving games and find it running in a store or get to play it around a friend’s house, then you’ll come away wanting both it and an Xbox One. In this respect, it’s arguably the best launch title on Xbox One or PS4, though fans of Killzone might beg to differ.

On another level, it’s slightly disappointing. You see, Forza Motorsport 3 was the first game to really break Gran Turismo’s stranglehold on the console driving sim, and Forza Motorsport 4 was even better. Being picky, we wished that it had had some of the thrills and spills of EA’s grossly under-rated Shift 2: Unleashed, but second for second, mile for mile, Forza 4 is the best driving game of the last generation. We can be sure that the same won’t be said of Forza 5. In isolation it’s a fantastic entry in the genre, but it’s simply not as good as Forza 4. 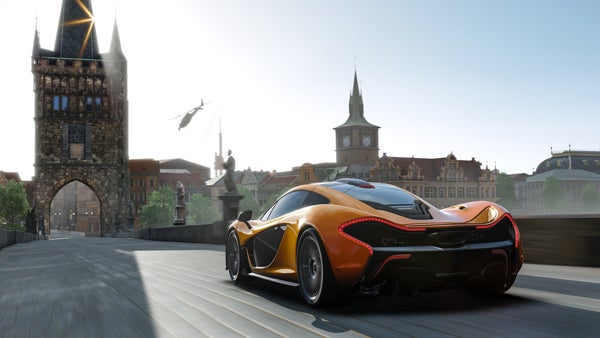 Why? Well, it really comes down to the career structure and the tracks. Forza 4 aced the former with its World Tour mode, which dragged you from track to track in a set order, but allowed you to decide which event you competed in on that track. Not only did this allow you to focus on the cars and events you liked playing, but it also kept you shifting from car class to car class if you liked. This – plus the generous dishing out of new cars every time you reached a new driving level – meant that you were constantly trying new things, and getting tangible rewards for your efforts. This was leagues away from the pedestrian championship grind of the Gran Turismo series. It was a case of bigger, better, faster all the way.

Forza 5 unwisely junks this idea, dividing its events into different car categories, covering compact sports cars, track toys, touring cars, exotics and the like, with each containing several lengthy series of races. All are unlocked straight away, providing you can afford a car to participate in them, and you work your way through them, only switching to a new series or new category once you’ve polished off the last. 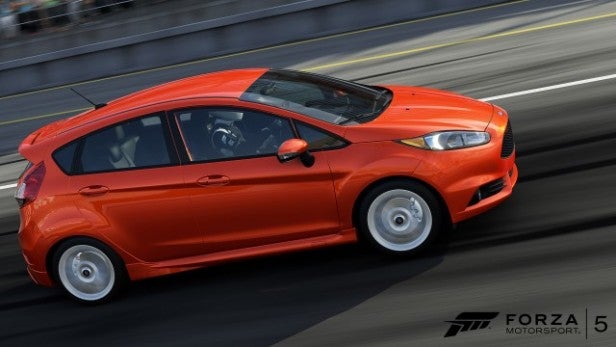 This is a little unimaginative, and while there’s still a sense of progression in levelling up and buying new cars, you won’t really find it in the substance of the career. The more serious problem, however, is that there are only 14 tracks, and that a disproportionate number of these are real-world circuits – and not necessarily the most thrilling ones, either.

Great as new additions like Prague’s city centre and Bathurst’s Mount Panorama are, they don’t quite make up for the loss of tracks as lovable as Fujimi Kaido, Maple Valley Raceway, Rally di Positano or the mighty Nurburgring. Plus, with what tracks there are repeated endlessly across all the categories, it’s not long before you start wishing for a teensy bit more variety. Laguna Seca again? Le Mans again? How about a change of scene?

Getting hold of new cars is also hard work. You buy cars with credits won by racing in the different series, but once you get beyond the basic compact sports, sports and touring classes you can be looking at splashing out an awful lot of credits before you can get anything half-decent. Plan to buy a high-end Ferrari or McLaren and you might be looking at hours of grinding while you save up for your dream car.

You can shorten the time by using the game’s second currency, tokens, or by purchasing tokens with your own real money. In fact, some cars are reserved as DLC purchases in the future. All in all, though, it leaves you feeling nostalgic for the days when spending £50 on a game actually got you, well, you know, the whole game. 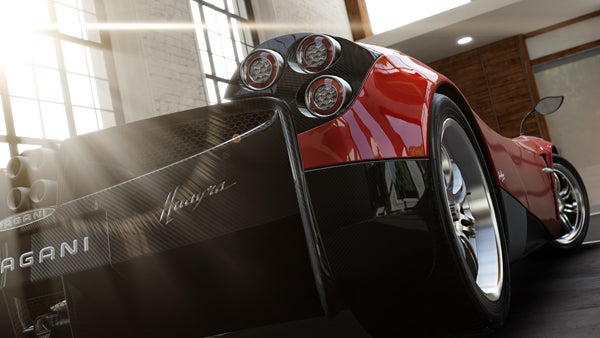 These are noticeable shortcomings, and Forza 5 gets docked two points from the final score for them and is only a whisker away from losing a third. The reason it doesn’t is because every other part of the experience is so damn good. For all that parts of Forza 4 seem stuck between gears, the rest of the game is surging forwards with a healthy roar.

It helps that this is a beautiful racer. If the trackside scenery doesn’t get you, particularly the snowy mountain scenery of the Bernese Alps or the cobbled streets and medieval architecture of Prague, then the lovingly rendered cars will. The modelling and lighting has now reached a level where the renders used in catalogues and adverts don’t look any better, and the interiors are practically bursting at the seams with carefully recreated detail. Running smoothly at 60fps in crisp 1080p, it’s the best-looking racer on a console right now. 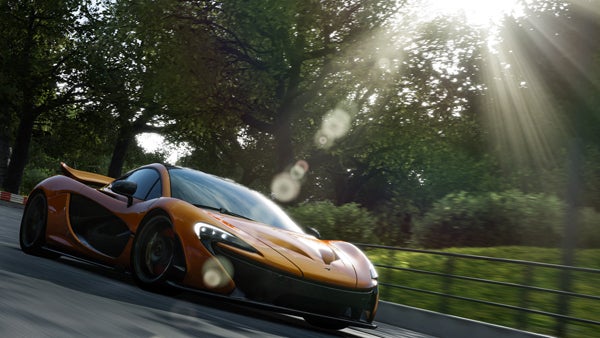 More importantly, the handling has never been better. We’re not sure what work Turn 10 has done since introducing the new tyre-based handling model in Forza 4, but the sense of all the complex interactions between tyres, bodywork and track is basically unparalleled in a console racer, unless you’re talking Gran Turismo 5 or 6 with a high-end steering wheel plugged in.

Compacts sports cars and coupes feel fast, well-balanced and precise. You can feel the weight of the muscle cars. The brilliant Lotus 2-Eleven is skittish, prone to spinning but hugely enjoyable to drive, and if there’s anything more exciting than getting behind the wheel of the Dodge Viper and tackling the twists and turns of Prague, then we’re not sure our poor hearts can stand it. The Xbox One controller’s ‘impulse trigger’ rumble feedback also plays its part. You can feel when you’re hitting the top of the gear range, or sense when the car is about to slide out of control as you brake.

As in Forza 4, you can tailor the handling to your tastes, giving you an easy drive with plenty of assistance if you want it, or a more authentic drive where you really have to work hard to keep the car on track. The choice is yours. 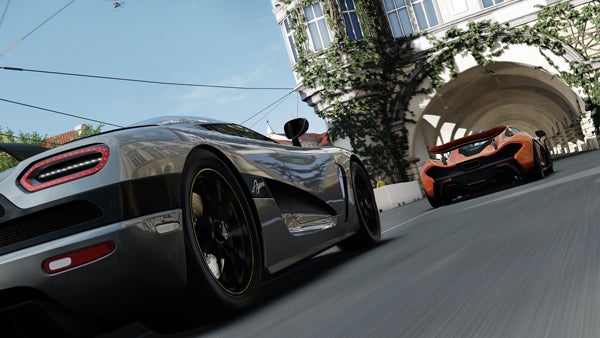 Things get slightly more complex when we come to the AI. Our biggest criticism of Forza 4 was that the AI was a little toothless, lacking the bite of Forza 3 or rivals like Shift 2: Unleashed. The same can’t be said of Forza 5, because the drivers you race against aren’t strictly AIs but cloud-based Drivatars, modelled on the driving behaviour of your fellow Forza players.

This has upsides and downsides. On the positive side, the competition is certainly unpredictable, and you’re forced to work hard to get a good final position. You’ll see cars nudging other cars or spinning off into the dirt, and the thrill that was missing in Forza 4 is here in spades. But the Drivatar AI is also inconsistent. Early corners are often a mess of late braking, shunting and poorly-timed turns, and relying on the old brake later, accelerate earlier routine no longer works at all, because everyone else is doing exactly the same thing.

This can be frustrating, but on balance we’d take the troubled Drivatar AI over the more soulless AI of Forza 4 or – worse – Gran Turismo 5. For us, the true test of a racing game is this: does a podium position make you feel like running a lap of honour round the living room? It’s a test Forza 5 passes time and time again. 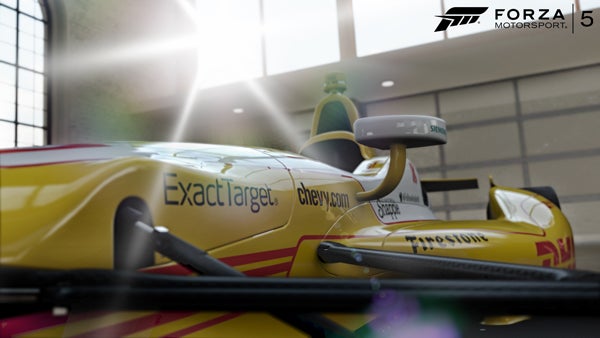 There are some aspects of the presentation that Turn 10 might also want to think about. With its overblown Clarkson voiceovers and orchestral backing, Forza 4 was only just on the right side of pompous, but it’s a line Forza 5 crosses regularly. Do we really need a score that might back the climax of a blockbuster action movie when we’re just driving a mid-range sports car across the finishing line on the Top Gear test track? And why have all the customisation and car upgrade options been squirrelled away in the main menu, with cars auto-upgrading for the current series when you buy them? We like the way Forza has shifted away from GT’s focus on upgrading over driving, but this is one step too far.

Of course, you can still customise your cars with all the paintjobs and decals you fancy, and while it’s not open yet you will be able to share these online. Online racing seems as robust as ever, though we haven’t been able to give it much testing before launch, with ready-made bundles of racing and the promise of monthly events to come. 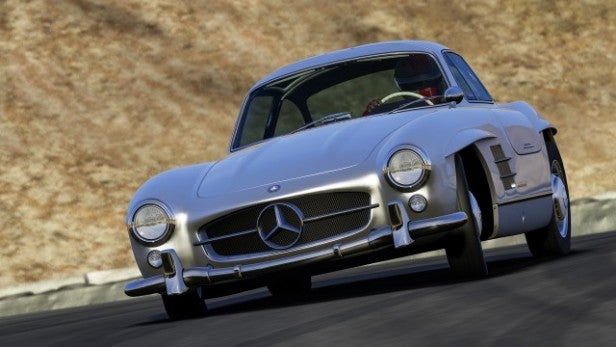 In the end, Forza 5 isn’t all that it could be. It desperately needs new tracks – and Microsoft could score some brownie points by making these free or at least very cheap.  It could also do with some restructuring once those tracks are introduced. Yet in the minute-to-minute racing it’s as gripping as any driving game we’ve ever played, and a whole lot better looking than any of them. That’s enough to keep Forza 5 near the top of the genre, even if it leaves us hoping for a whole lot more from Forza 6.

Forza 5 suffers from a reduced track list and unimaginative structure, but there’s no getting past the fact that the action on the track is better than ever, with magnificent graphics, superlative handling and a new edge thanks to the Drivatar AI. The latter isn’t a complete success, but we’ll take the way each makes each race more interesting every time. Forza 5 falls frustratingly short of greatness, but it’s an irresistible force all the same.

Next, read our in-depth Xbox One vs PS4 comparison