What is the Sony Xperia Z3 Compact?

The Sony Xperia Z3 Compact is a 4.6-inch Android phone and the baby brother of the 5.5-inch Xperia Z3. It’s also the successor to the excellent Xperia Z1 Compact. If you’re wondering where the Z2 Compact is, well, Sony seems to have skipped a generation, leaving us expecting something of a revolution with this latest instalment.

Sadly the Z3 Compact is no revolutionary, but when you compare it to the Samsung Galaxy S5 Mini the HTC One Mini 2 and other similarly sized Android phones, it’s still the handset that manages to cram flagship features into a more pocket-friendly body.

You get the same powerful overall performance as the Xperia Z3, plus the same impressive camera and mammoth battery life, at a saving of more than £100.

While the Z1 Compact was pretty much a clone of the Z1, it’s not quite the same story for the Z3 Compact. It retains most of the Z3’s good looks, but you do have to make one compromise: more plastic. It’s not a deal-breaker, but it does feel like a backwards step from Sony.

It still has the tempered glass on the back and front, and the latches protecting the key ports to give it the same waterproof certification as the Z3, but it’s on the sides where things are different. The anodised aluminium trim used on the full-fat Z3 has been swapped for a cheaper-looking translucent plastic that takes away some of the Compact’s overall sheen.

The red colouring of the version we tested certainly made the change in materials more noticeable, which dropped the Compact some style points. If you’re hoping for something as elegantly constructed as the Z3, you might be a bit disappointed. Over time, though, you do quickly forget it’s there, and it actually gives the handset a more robust, durable build. 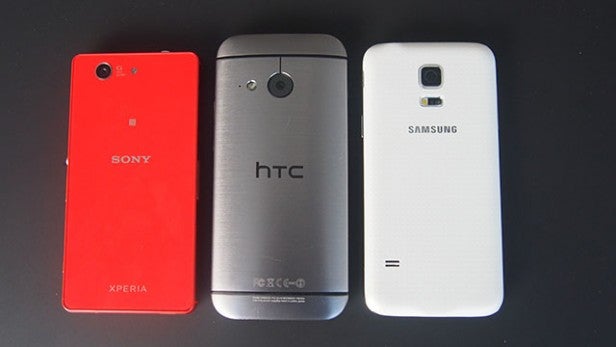 There’s more similarities to be found with the bigger Z3, such as Sony’s Omnibalance design emphasised by the aluminium standby button and more subtly curved look. The Z3 Compact is available in white, black and green versions as well,
and we have no doubt that the black and white versions would do a much
better job of de-emphasising that plastic trim.

It has the same rounded corners as the Z3, to help improve
protection against accidental drops – that glass back likes to slip around when left on soft material
surfaces.

It also includes the same front-facing speakers above and below the screen bezel, which means there’s less chance of cupping the speakers, as can be the case when they’re placed on the back. One issue with the speakers, however, is that they have a habit of trapping muck and dirt. It’s a similar story at the top of the phone where the bezel meets the plastic trim. The gap is just big enough to suffer from the same problem.

One thing we highlighted with the Z3 is the busy nature of the body, and again the mostly minimal design is broken up by buttons, latches, the five-pin 3.5mm headphone jack and the magnetic dock connecter that we’re pretty sure nobody uses.

At 8.6mm thick, it’s not as slim as the Z3’s 7.3mm, but
weighing just 129g it matches the iPhone 6. While the Apple is
a different proposition to hold, the Z3 Compact is similarly easy to grip and use in one hand.

Compared to the S5 Mini and the One Mini 2, we’d still opt for the HTC phone for pure design, but despite the plastic trim, it’s a better-looking phone than the S5 Mini. Even without the metal edge, it’s still a nicely constructed, solid phone to use. 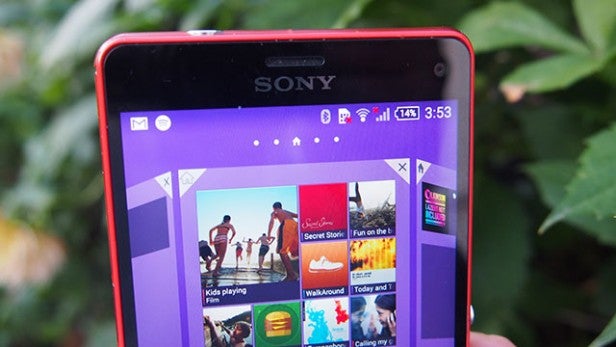 Sony has moved from a 4.3-inch to 4.6-inch IPS LCD screen, so there’s a little more room to play with, but the resolution is the same 720p HD as the Z1 Compact’s display. The pixel density has dropped down to 319ppi from 341ppi because of the change in size. It’s disappointing that Sony hasn’t matched the Z3’s Full HD display, but this is still good for a phone this size, and it matches what the competition currently offers.

As with the Z3, Sony is using the same Triluminous and X-Reality For Mobile display technologies inspired by its Bravia TV range, which improve sharpness, contrast and colour accuracy. Once again, colours can feel a little bit of an explosion, and thankfully Sony does let you tinker with this in the Display settings. For the many who won’t venture into those settings, it’d be nice for Sony to set it up with something more balanced and neutral.

The adaptive display setting adjusts the brightness depending on the environment and also makes sure you’re not unnecessarily draining the battery. When you have to take the Xperia Z3 Compact outdoors in the bright sunlight it’s not all rosy and it still has some issues with glare, which means it’s not always the easiest to read on.

Against the S5 Mini and the One Mini 2, the Z3 Compact more than holds its own for sharpness, clarity and vibrancy. It can’t match the black levels on Samsung’s AMOLED display, but the improvements with contrast that Sony’s made really shine through.

This is still one of the best 720p HD displays to glue your eyes to.