Prepare to be confused. After Sony announced the Xperia Z4 earlier this year but didn’t launch it to Europe, the company did then bring the very same phone to Europe under the name Xperia Z3+. Just months after that underwhelming launch, Sony has a trio of new phones incoming, including the Xperia Z5.

Keeping up? We’ve gone into detail about how the Z5 compares to the Z5 Premium and Z5 Compact, but what if you want to keep things simple and move from one 5.2-inch Sony flagship to another?

We’ve scanned over the specs sheets to see how much of an upgrade it will be if you step up from the Xperia Z3 or Z4/Z3+ to the new Z5.

When Sony first introduced the metal-bodied, glass-backed design on the first Xperia Z smartphone, it came as a refreshing alternative to other flagships. Now many iterations later, it’s still the same design philosophy, which is starting to feel a little dated. If you were hoping for something radically different, then prepare to be disappointed. If you care about dunking all three in water, then you can still do that, plus those nylonised rubber corners are still in place to add a little extra protection.

The changes between the three phones are minor. In the Z4/Z3+ and Z5, you lose the magnetic dock for a less cluttered look and the capless USB port has moved to the bottom of the phone. With the Z5 you’re essentially getting a phone that’s the same thickness and weight as the Z3. There’s also the addition of a fingerprint sensor, which is baked into the standby button on the side of the phone. If you want the slimmest and lightest of the bunch, then the Z4/Z3+ is the one to go for.

Ultimately, though, these three phones are near identical and whichever one you go for, you’re going to get a similar experience on a daily basis.

Related: iPhone 6S vs Samsung Galaxy S6: How will Apple take on Samsung? 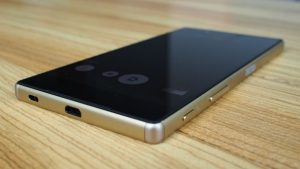 It’s all square once again this time on the screen front, where Sony is sticking with the same Full HD LCD screen across the board. It’s also throwing in the same Bravia TV-inspired display technologies, such as ‘Sparkling Contrast’, ‘Live Colour Creation’ and ‘X-Reality for Mobile’. All of which should help deliver a sharp, vibrant display.

The pixel density creeps up ever so slightly with the Z5, but you’re unlikely to notice the difference. Sony’s screens have always been impressive, but with Samsung and LG doing such a great job with its QHD displays, it’s perhaps time for Sony to step up and offer something a little more cutting-edge and exciting like it is with the Z5 Premium.

If you’re taking pictures with the Z4/Z3+ or the Z3, you can expect to get similar results. It’s virtually the same camera array with both, featuring a 1.2/3-inch main sensor and wide 25mm lens to fit more into your pictures. You get more megapixels to play with for selfies on the Z4/Z3+, but overall it’s an identical shooting experience.

The Z5, on paper at least, does make some improvements here. Along with a bump up in megapixels for the main sensor, Sony claims the Z5 has the world’s fastest autofocus and a new Clear Image Zoom to improve digital zoom performance. Optical image stabilisation is provided by Sony’s own SteadyShot technology borrowed from its compact camera range, which should also aid low-light shooting.

Our previous experiences with Sony’s previous Z phones have not been great, but the Z5 has all the tools to be the best performer in the camera department. 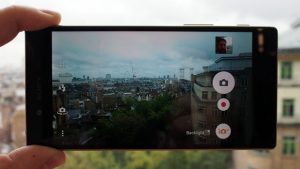 Xperia Z5 vs Z4/Z3+ vs Z3: Software, Storage and Processor

On the software front, Android Lollipop runs across all of these, although Z3 owners have had to wait a while to enjoy it. We’d like to think they will all will get the Android M treatment at some point, but judging by how long it took for Lollipop to turn up on the Z3, there could be some wait. At least Sony’s Android overlay isn’t as intrusive as other approaches. From the Z3 all the way to the Z5, Android’s core features still shine through, even if you do have to put up with a lot of native Sony apps taking up space in the app drawer.

To keep things running smoothly, all three have 3GB of RAM, with the Z5 packing a 64-bit Snapdragon 810 processor. The 810 has come in for some criticism, including from ourselves, about the overheating issues. It wasn’t an issue with the Z3, however the 810 included in the Z5 is said to be a tweaked version of the chipset. So those issues that plagued the Z4/Z3+ should be no more.

For those that care about microSD card storage and lamenting the loss of the feature from Samsung’s phones, Sony’s trio all have the ability to expand beyond the internal storage, with the Z5 now supporting up to 200GB. 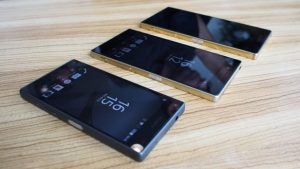 If there’s one area Sony’s phones have not let us down, it’s on the battery front. The Xperia Z range has lived up to its promise of two-day battery life, with a little help from the very impressive power-saving modes.

What’s surprising and ultimately disappointing is that as the specs above show, the battery capacity continues to get smaller. It’s a smaller drop when you compare the Z4/Z3+ but when you look at what the Z3 was packing, it’s a little more apparent.

Hopefully, you’ll still get that mammoth battery life out of it, but it’s a concern to see capacity going in the opposite direction we’d like to see it.

So if you own an Xperia Z3, and still love the Sony flagship phone, then there are a few areas you can expect to see improvements with the Z5. Notably, those should be in the camera and performance departments. Other than that, it’s not a great leap forward from the Z3, let alone the Z4/Z3+.

With the arrival of the Z5 Premium, the Z5 doesn’t feel like Sony’s standout smartphone. If you’re looking for something to get excited about, you should probaly cast your attention to the 5.5-inch Sony phone with the 4K screen instead.