There are many positives to take from the iPhone 7, but unfortunately they're negated to a large extent by poor battery life and a lack of basic features.

The iPhone 7 entered the world with a bang, thanks to headphone controversy and a price hike seemingly in the wake of Brexit.

But at first glance you’ll wonder what’s changed – it looks pretty much the same as an iPhone 6. I loved that design, but then I loved the design of the iPhone 4 – that doesn’t mean I want a phone that looks like that in 2016. Still the 6 design was good, but would any other company get away with a two-year-old look for its flagship phone?

Get past this and the iPhone 7 delivers a unique experience among iPhones, which is both a good and bad thing. The new features – water resistance, an incredible quad-core processor and, crucially, a 32GB starting storage capacity – are all very welcome. So is the excellent camera that’s had the right upgrades to make photos look better.

But like the eponymous Batman villain, the iPhone 7 has two faces. The removal of the headphone jack feels unnecessary and restrictive, the handset costs more than the 6S did when it was released last year (in the UK at least), and the iPhone 7’s battery life is a real problem.

If you want a small Apple phone you’d be better off opting for the iPhone SE. Alternatively check out our iPhone 7 Plus review. Yes that phone is even more expensive, but it lasts a lot longer and has an even better camera that offers proper zoom. There’s is one other option to consider too if you’re hooked on Apple. The iPhone 6S Plus remains a great phone, has strong battery life and costs exactly the same as the iPhone 7.

There’s not much to talk about when it comes to the aesthetics of the iPhone 7. If you’ve used an iPhone 6 or 6S you’ll feel like you’ve returned home after a long holiday and the window curtains have been changed.

For standing out from the iPhone crowd, the new Jet Black finish is really your only option. A Jet Black iPhone 7 looks like no other handset. It’s not like the plastic iPhone 5C – this is a phone made out of metal, but which is smooth to touch without being slippery. Yes, it attracts fingerprints, but who cares when it looks this good? One not of caution, though. It does mark up a little easily so you’ll need to treat it with care if you want it to keep looking good. 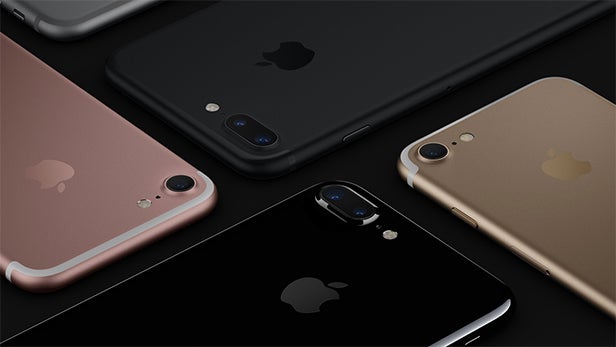 The second new colour on offer is simply called Black. This replaces the Space Grey of previous models and makes the iPhone 7 looks like a mean machine. The other versions available are Silver, Gold and Rose Gold.

The iPhone 7’s size and shape is almost identical to the previous models, however the antenna bands that formerly ran across the back now tastefully curve around the ends, and the camera nub is more rounded. These changes are small, but welcome, although it does mean you won’t be able to use an old 6 or 6S case.

The iPhone 7 retains those chunky top and bottom areas of its bezel and this means it offers less screen space for its size than the HTC 10, LG G5 or Samsung Galaxy S7. The latter has very similar dimensions but comes with a 5.1-inch screen, compared to the 4.7-incher on the iPhone 7. It feels like some other brands have overtaken Apple when it comes to phone design.

That’s all there is to discuss about the aesthetics. However, there’s plenty to talk about when it comes to design. Apple’s made some fundamental changes to the iPhone 7 that will affect the way you use your phone for better and worse.

Let’s start with the missing headphone socket. For some people this is going to be a big issue, but it hasn’t been a problem for me.

There are a number of potential reasons why Apple’s decided to remove the 3.5mm socket from the iPhone 7, but the company won’t outright tell us why.

Space seems to be the primary factor when you look at the internal design. The new Haptic engine is a lot chunkier and takes up some of the space, as does the louder speaker that’s been crammed into the bottom. Apple has clearly decided improved features on the iPhone 7 are better than keeping a 50-year-old connection, particularly since wireless headphones have become increasingly popular over the past few years. In fact, Apple has launched its own wireless headphones, called AirPods. Shame you’re going to need ‘courage’ to wear AirPods outside… 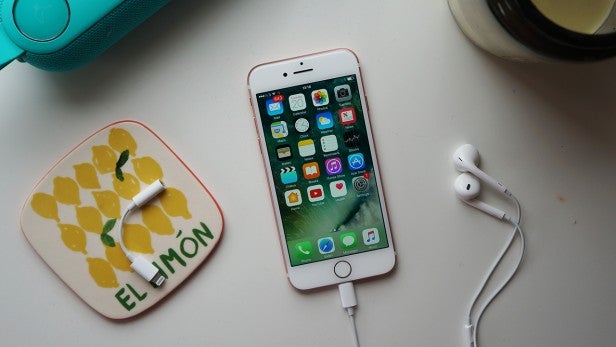 That’s all well and good, but for many who own a great pair of wired headphones this will prove a problem. Apple has resolved it to a great extent by providing a pair of Lightning Earpods and a small adapter in the box with the iPhone 7. The adapter lets you plug wired headphones into the charging port. It works well, but you won’t be able to charge your phone and listen at the same time, plus it’s small and easy to misplace.

There are some neat third-party Bluetooth aptX headphone adapters available, such as the £69 Noble Audio BTS, but be prepared for an inevitable drop in audio quality when used with high-end headphones.

I haven’t been too affected by the lack of jack. Having bought into the convenience of wireless headphones a few years ago, I now favour them over my better-sounding wired pairs. It’s a transition I expect many of us will make over the coming years.

The other design change I got to grips with quickly is the new Home button – if you can still call it that.

Gone is the iconic click; it now has capacitive touch sensitivity. That means it works using the tiny bits of electricity in your fingers, just like the screen does, so if you’re wearing normal gloves it won’t function.

Incredibly, I could’ve sworn that the button had some give to it until I turned the phone off and realised that I’d been duped. That’s how good the new Haptic engine is. The feedback it offers tricks your brain into thinking the button can actually be pressed. This isn’t just smoke and mirrors; it feels real. I thought I’d miss the old iconic iPhone Home button, but I don’t.

That Haptic engine is used for more than just the Home button, though – the iPhone 7 now feels like it talks to you by vibrating at key moments. Whether you’re scrolling through the timer or getting a call, the refined buzzes tell you a lot more than the iPhone 6S ever did.

One of the reasons the Home button has been changed is because of the iPhone 7’s headline feature: water resistance.

Apple may not be the first to create a water-resistant phone, but it’s a brilliant feature to have nonetheless. That’s because one of the main reasons people ruin their phone is through water damage. I’ve broken a phone or two by dropping it in the wet stuff in the past. 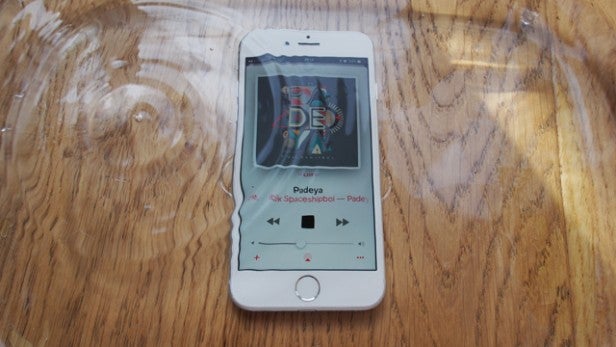 The iPhone 7 is hardy enough now to withstand a moderate dunk in up to 1m of water for up to 30 minutes. The iPhone 7 manages an IP67 rating for water and dust resistance, which is a little less than the certification achieved by the Galaxy S7 and Sony Xperia Z5. Don’t let that bother you, though. The difference is small and I’ve used the iPhone 7 in the shower and left it in water for 30 minutes and it still works just fine.

Water resistance is an added level of insurance for flagships that cost a lot to replace. It certainly came to my rescue when I dropped the iPhone 7 in a puddle while camping on a wet weekend.